CHICAGO (CBS) -- When you dine out, and the check comes, it usually includes the cost of your food and taxes, but more restaurants are adding a new surcharge to your bill to cover the costs of employee health insurance.

The restaurant business is physically demanding. Some businesses are choosing to address those concerns and advertise it to customers. 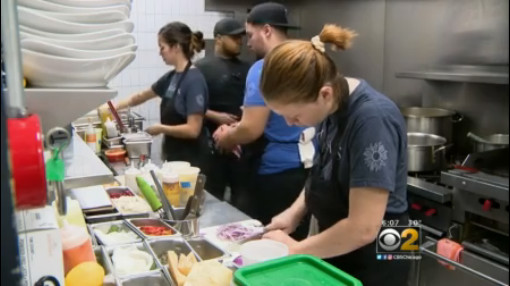 "I didn't go to the dentist for seven years," owner Joe Frallman said. "When I finally went the bill ended up being 3,500 bucks. You don't have insurance."

Frallman didn't want his staff to go through that, so about a year ago he added a two percent surcharge to food bills.

About a dozen employees pitch in about $100 per month, and the employer pays the rest. Frallman says it's to attract and retain talented workers in short supply.

He says larger restaurants may be doing the same. They're just increasing the cost of food without the consumer knowing were the extra money's going.

"If anything happens we want to make sure they're taken care of," Frallman said. "Why is it important to be transparent? Well, again I didn't want to make it seem like it's going into the owner's pockets."

At Fat Rice the owners say they'll add a four percent surcharge next year to help pay for health care and some wage increases.

Covering their employees for a year would cost nearly $200,000. The surcharge would help pay for half of that.

Owners describe this as a way to help and send an industry message.

"For critics that say health care is the responsibility of the owner, they're exactly right. This is our responsibility, and that's why were taking it on," said Fat Rice co-owner Abraham Conlon. "The consumer needs to pay more money for food because it takes people to produce food."

Some call the surcharge a risk, but Conlon says it's one worth taking.

"We believe that the community will support it," Conlon said.

Both business owners say they are not going to make their customers pay those surcharges if they don't want to, but one owner said that has only happened a handful of times over the last year.