By Albert Ramon and Robb Ellis

CHICAGO (CBS) -- A busy weather pattern will kick off your workweek with widespread rain, windy conditions and possible flooding through at least midday Monday.

A storm system to the south of Chicago was the trigger for this unsettled weather pattern, and could produce major impacts for your morning commute. 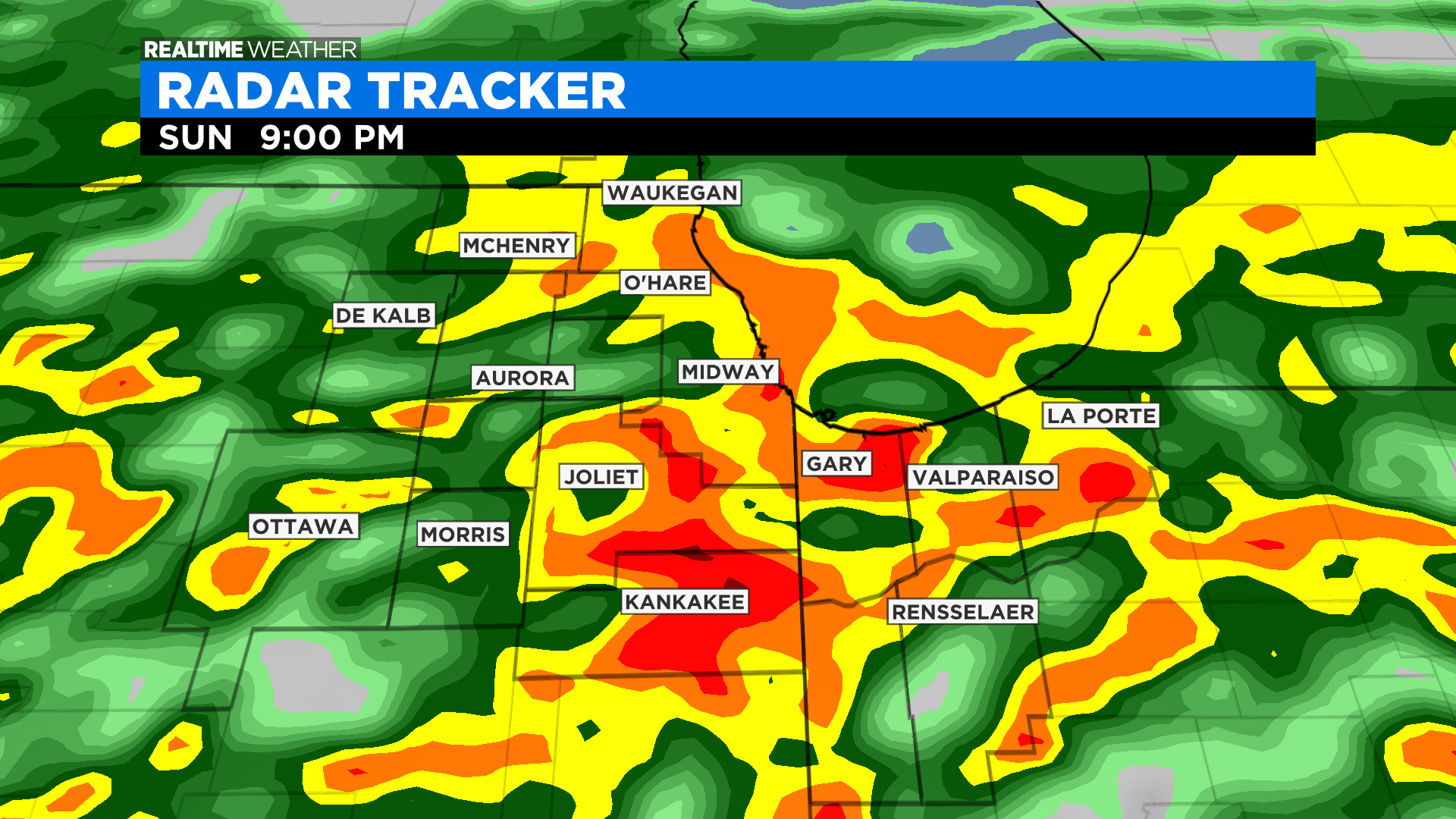 Rain fell steadily and heavily late Sunday with occasional pops of thunder and lightning. The will continue through midday Monday across the region.

Some of the showers have been heavy and could continue to be, so a Flash Flood Watch has been posted for parts of the area through mid-morning Monday. Areas of 2 to 4 inches of rainfall will be possible, with the greatest risk of flooding for areas south of Interstate 80.

Total rainfall amounting to 1 to 3 inches were already reported by 10:30 p.m. 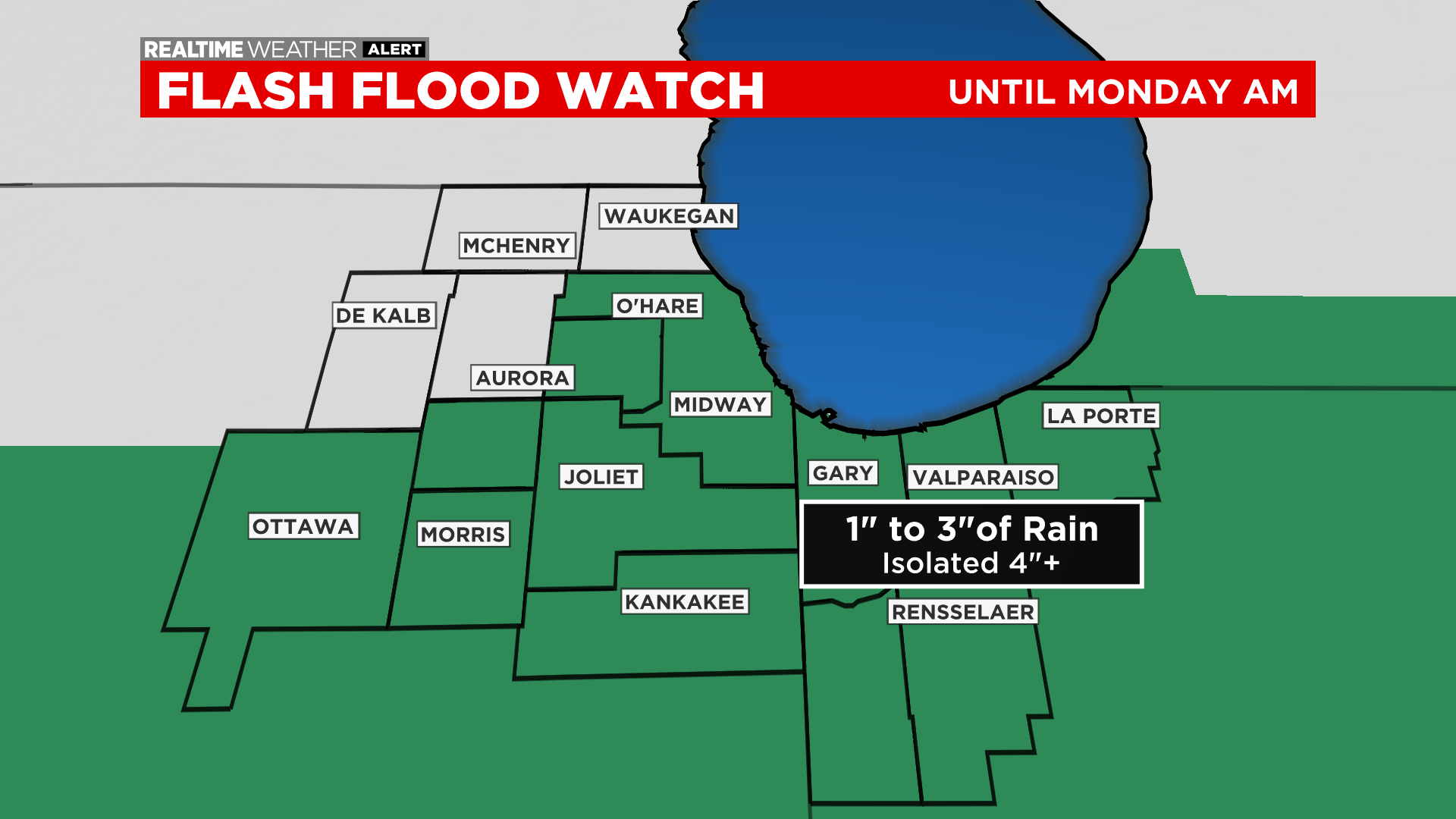 The same storm system will be the focus for strong wind gusts. A Wind Advisory is in effect starting at midnight Sunday night through Monday evening for the potential for wind gusts as high as 45 to 50 miles per hour. The strongest winds will be near the lake along central Cook County and northward to Lake County, Illinois. These intense winds could be strong enough to down tree limbs which could trigger power issues for some areas.

There are no tornado watches or warnings associated with this system within the Chicago area. But some have been called for the southern and central parts of Illinois.

A tornado warning was in effect until 10:15 p.m. for parts of downstate St. Clair County, and a warning was also issued in downstate Randolph County – both close to St. Louis.

A couple of tornadoes were reported in that area. A tornado that moved through Chester, Illinois was reported to be especially damaging.

A few tornado warnings also popped off near Springfield Sunday night. A tornado watch was issued for central Illinois. 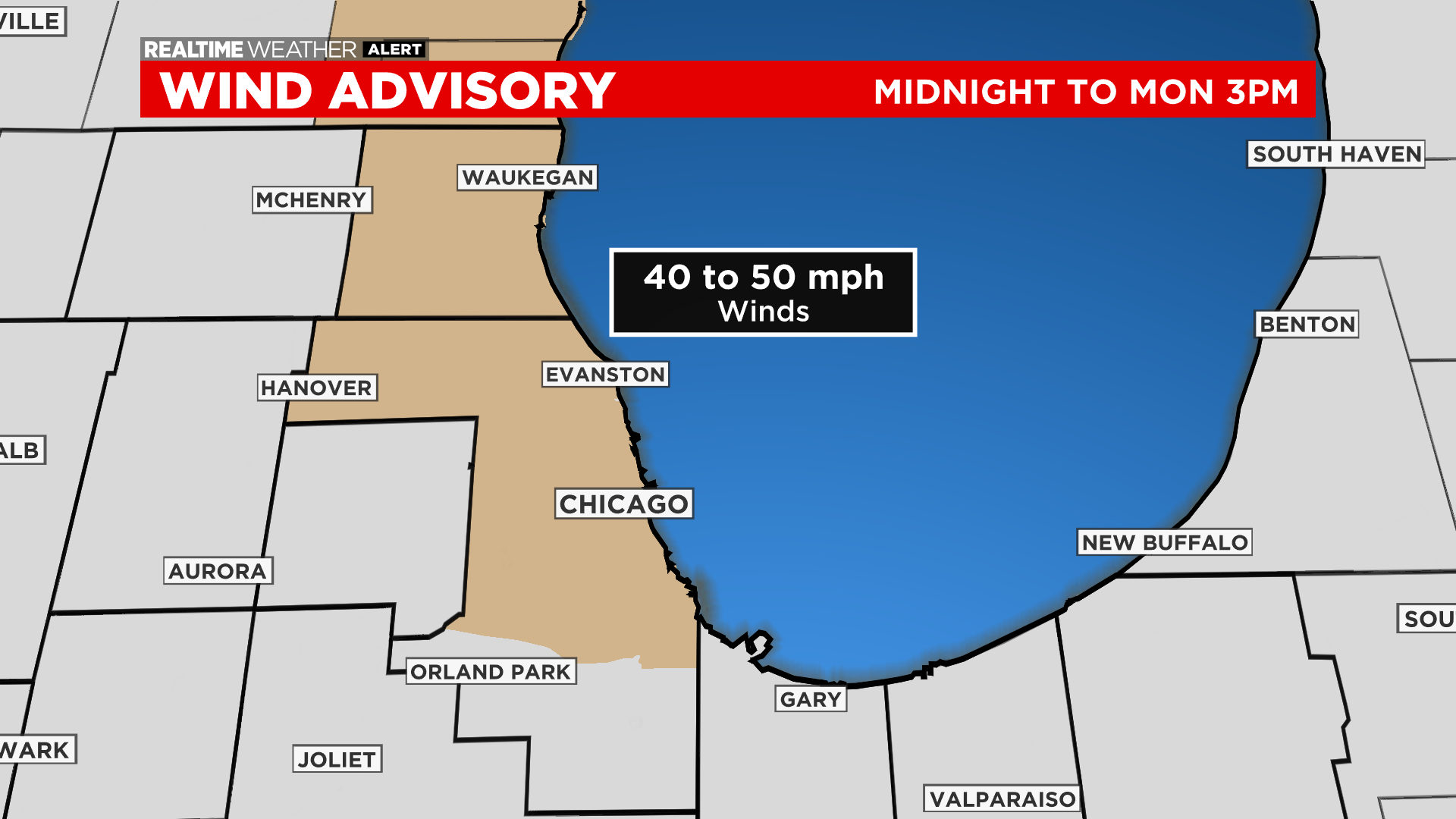 Cancel your morning jog along the lakeshore on Monday. Strong winds will make for a very rough Lake Michigan with wave heights of 10 to 14 feet along Cook County and as high as 16 feet along Lake County, Illinois. Flooding of trails and parks will be likely with a Lakeshore Flood Advisory in effect through Monday evening.

Waves of 11 feet were being reported right off the lakeshore as of 10 p.m. 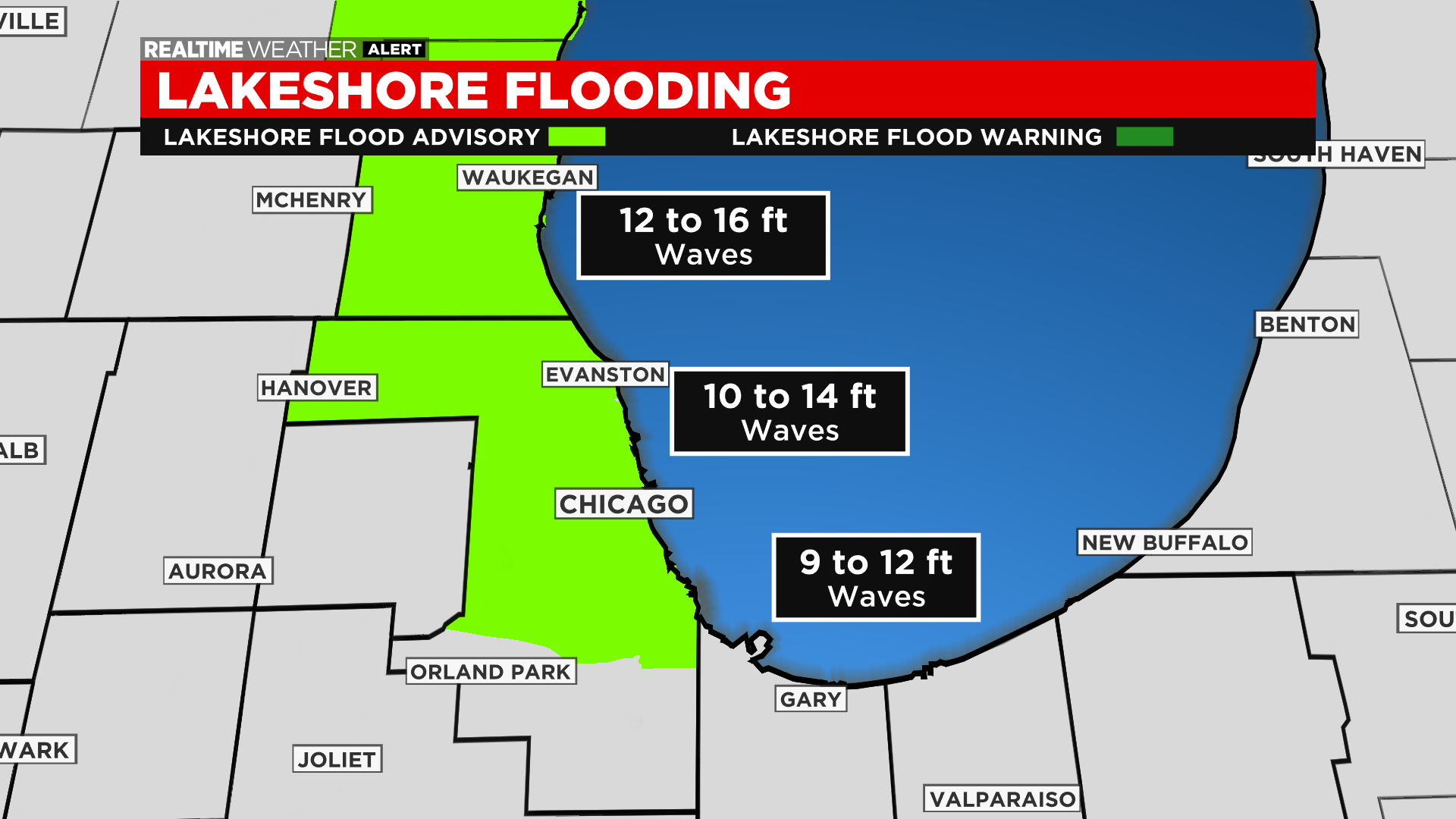 At midnight Sunday night, expect scattered to numerous showers across the area. The heaviest rainfall will be for areas south and southeast of Chicago. Temperatures will be in the 40s and 50s, but an east-northeast wind gusting to 40 miles per hour will make it feel much colder. 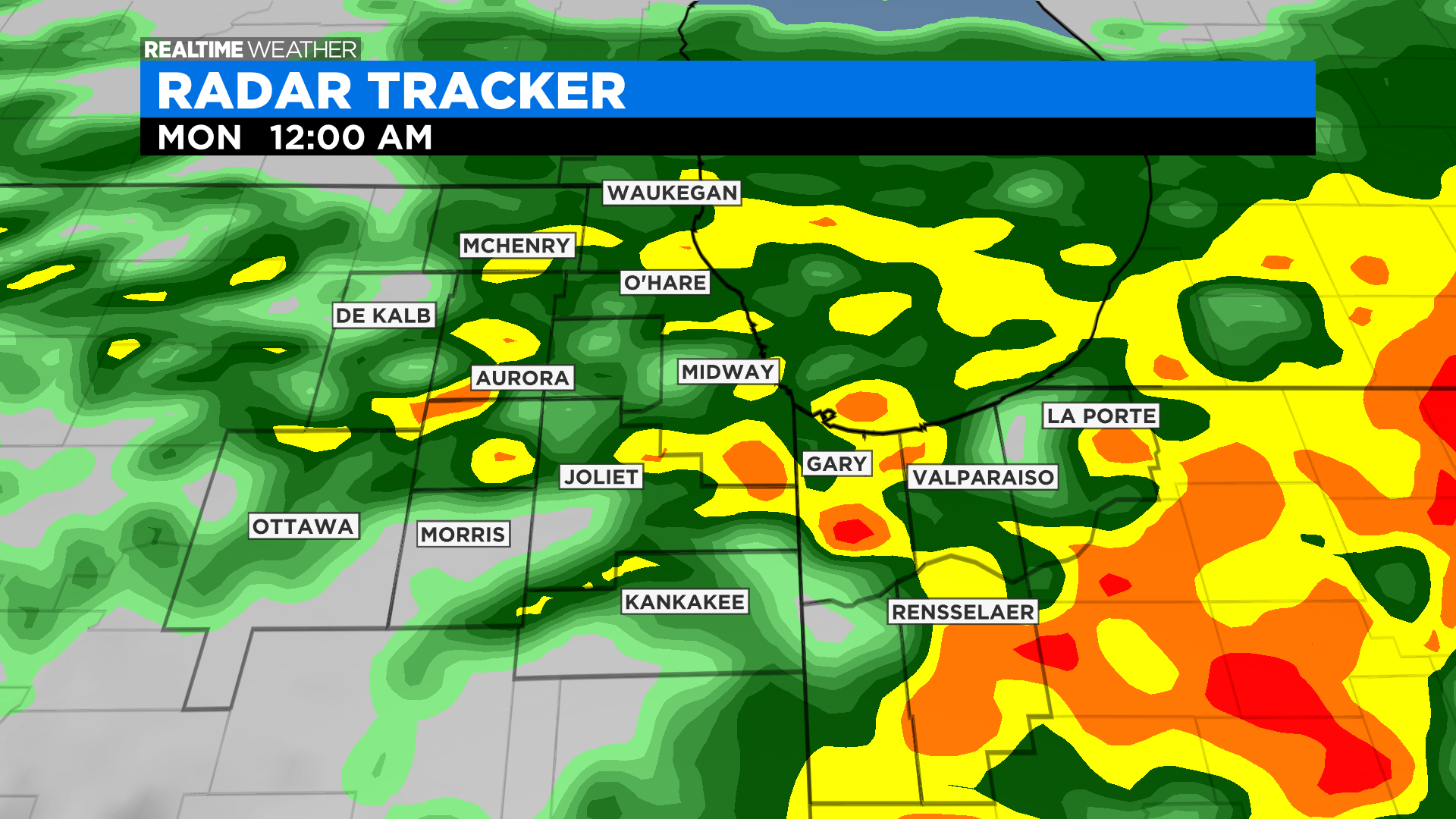 At 4 a.m., widespread showers continue with temperatures in the 40s in most locations and wind gusts approaching 50 miles per hour in some spots. 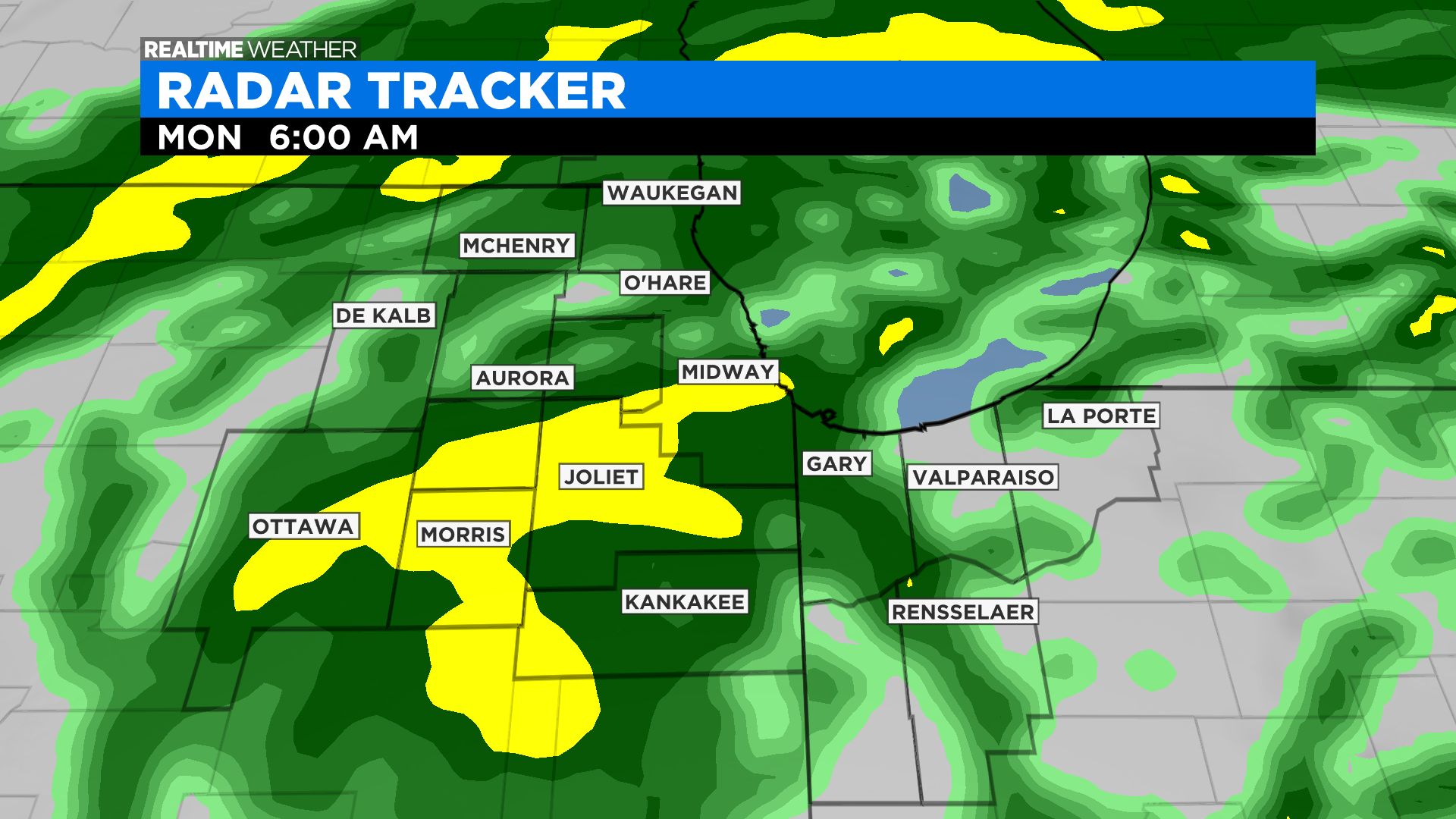 At 7 a.m., expect scattered downpours and northeast wind gusts between 40 to 50 miles per hour. 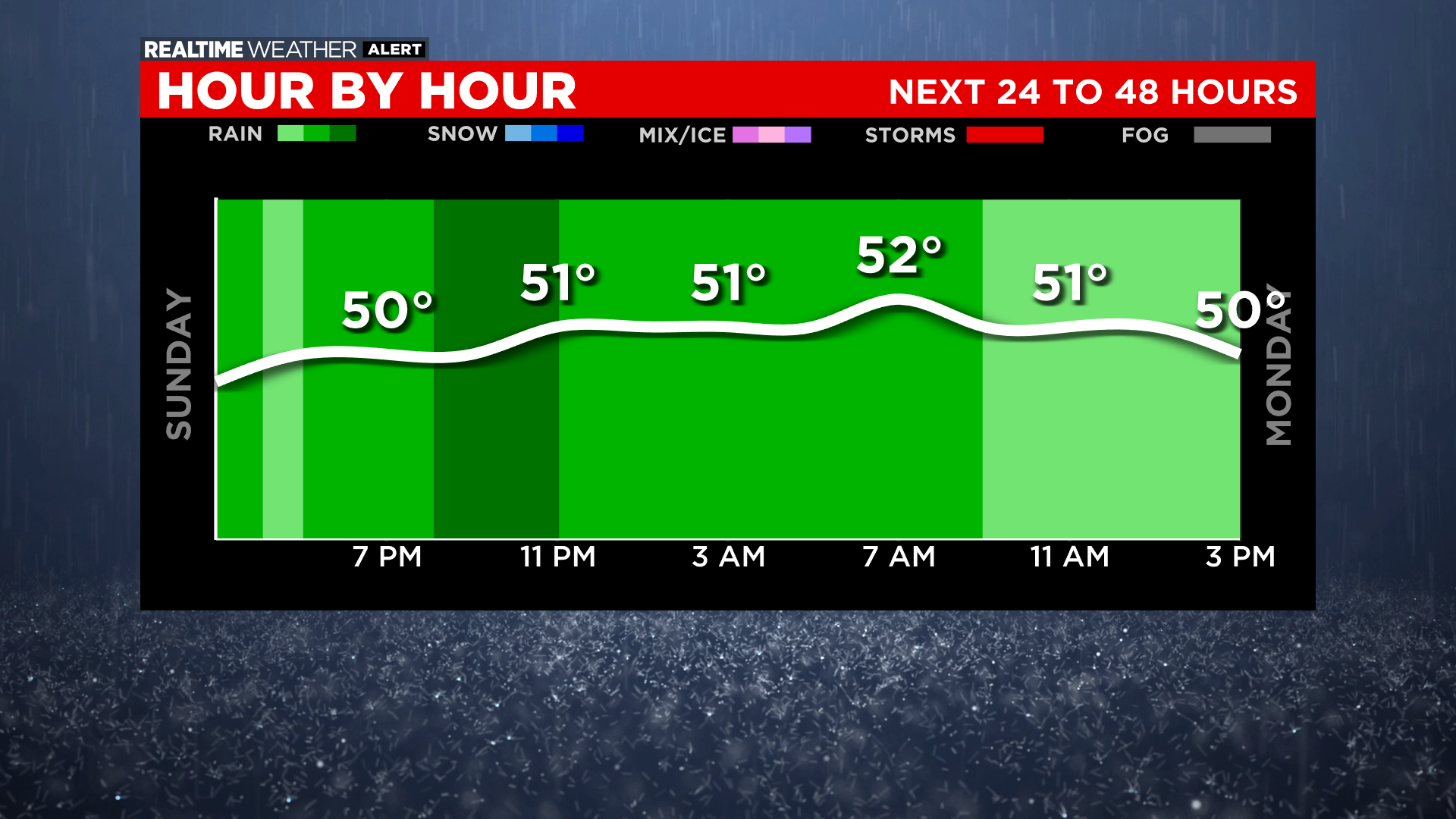 At 9 a.m., windy and chilly with temperatures in the 40s and 50s. Rain chances start to decrease for the far western suburbs.

At 11 a.m., Rain begins to move out of the area. Lingering light showers likely through the early afternoon. Wind gusts around 40 to 45 miles per hour. 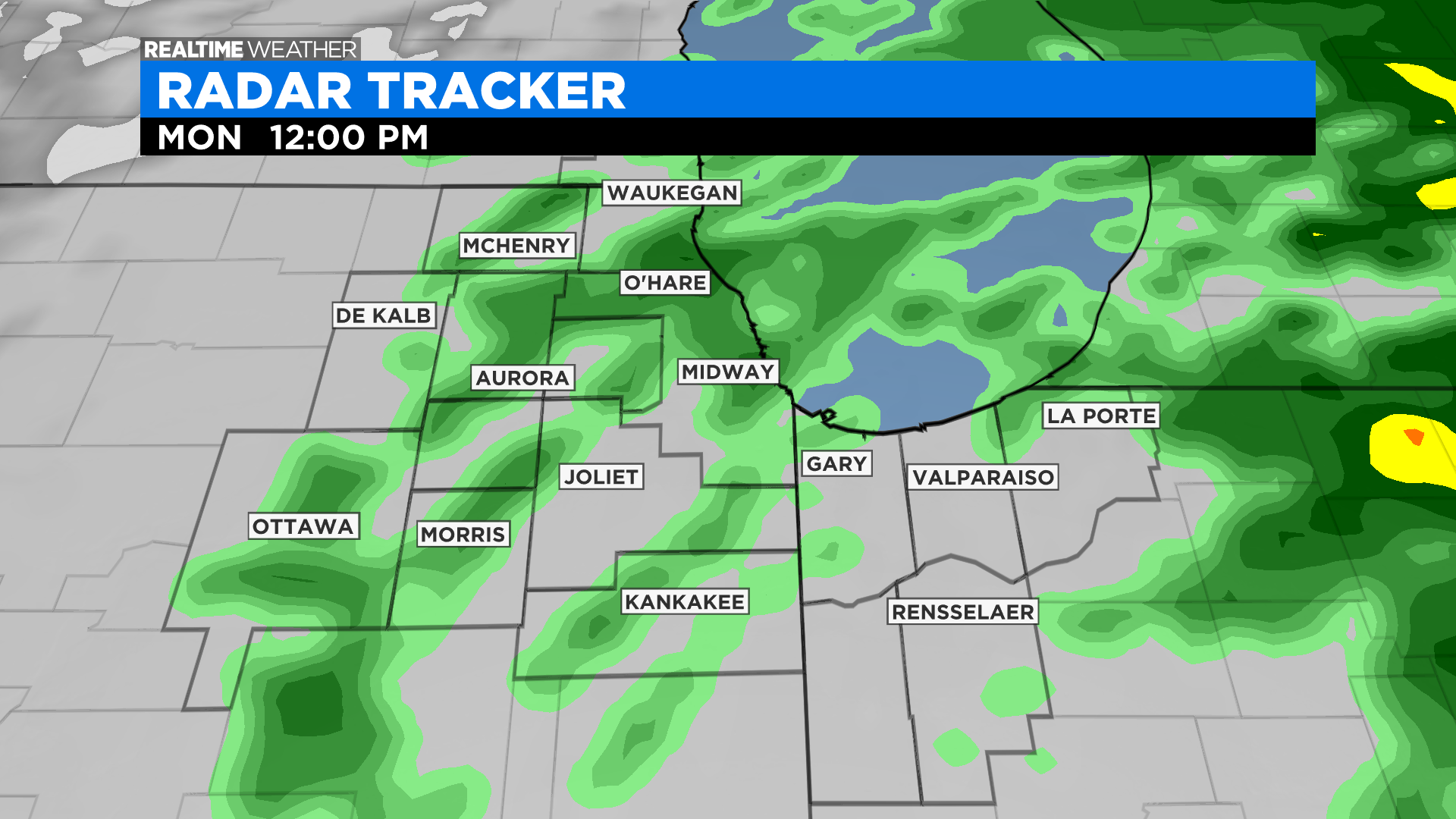 The bulk of the rain will shift to the east of the area by the 2 p.m. Lake effect showers will be possible through the evening though, but mainly for areas near the lake and coming from the northeast. Wind gusts slowly decrease to 20 to 30 miles per hour by sunset Monday. 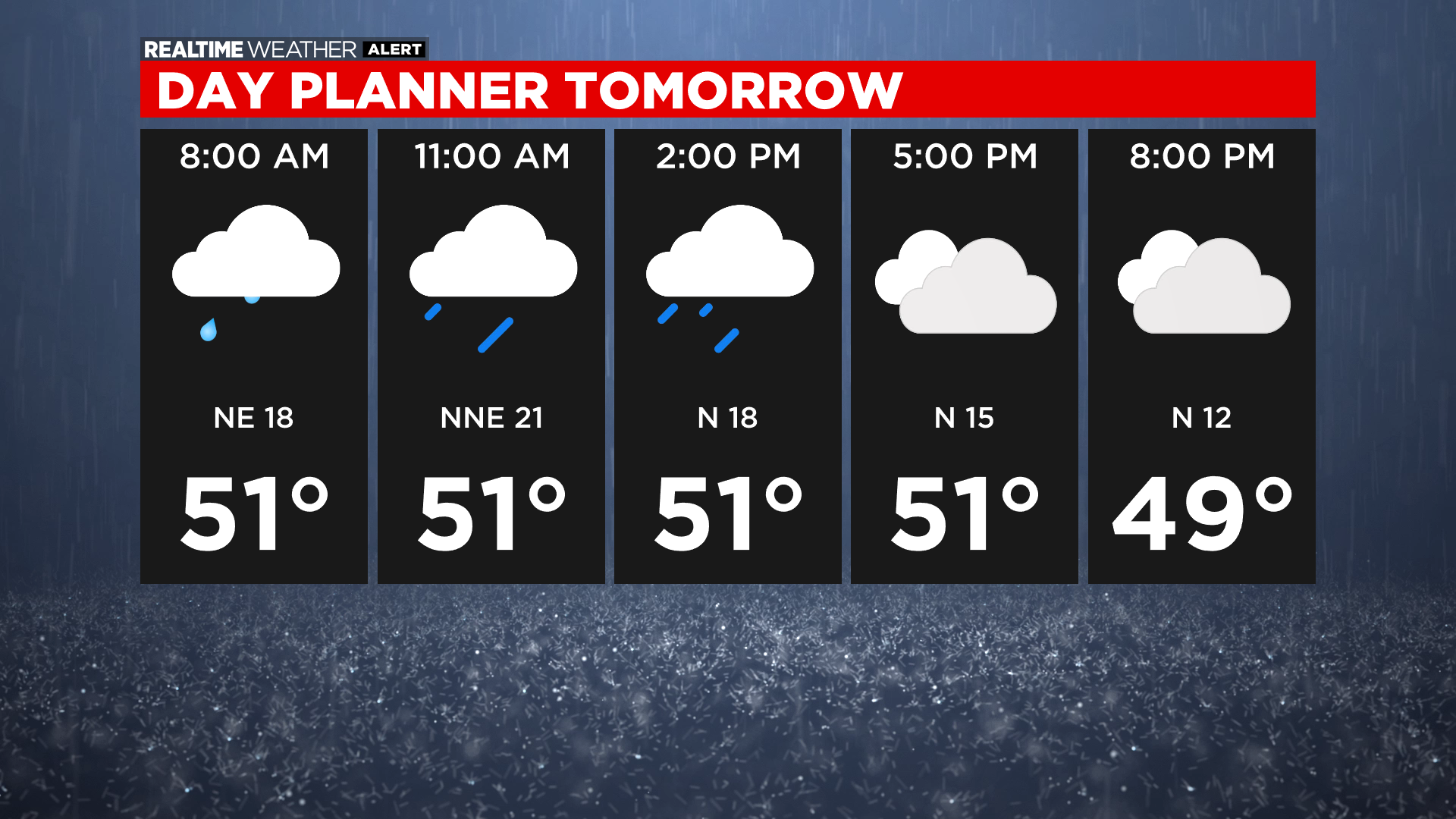 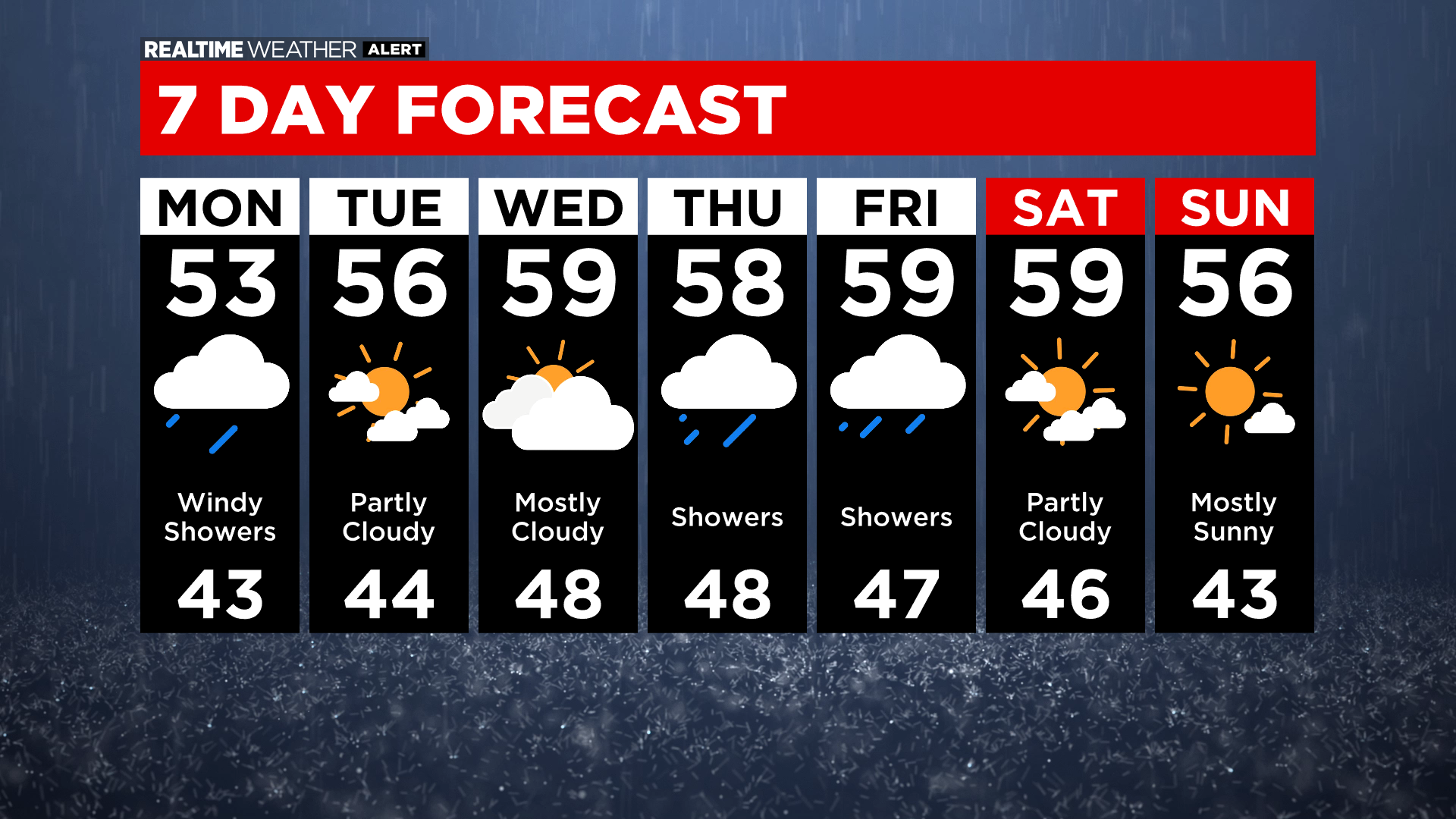