CHICAGO (CBS) -- Illinois budget deficit skyrocketed to almost $44 billion, by far the worst in the nation, the state's auditor said in report released this week.

The latest audit looked at the 2011 fiscal year, which ended last June. The deficit has more than doubled to $43.8 billion in four years. It stood at just over $20.8 billion in 2007, according to a report filed by auditor William Holland.

According to the report, five states have a budget deficit, and Illinois' is by far the biggest:

Gov. Pat Quinn's office blamed the deficit on problems beyond his control.

"These unpaid bills are the result of decades of fiscal mismanagement as well as the economic downturn and diminished revenues," the official response said.

Comptroller Judy Baar Topinka attributed much of the growth to excess spending, rather than a dramatic fall-off in revenues.

"It provides yet another cautionary note that we need to rein in spending and address the growing costs that are devouring the state budget," Topinka said in a statement. 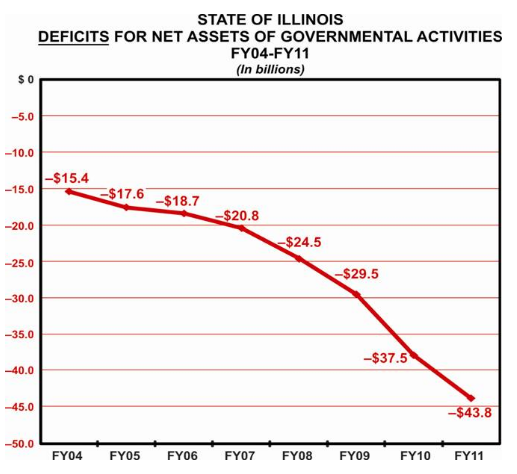