HALAS HALL (CBS) -- Five years into his NFL career, Earl Bennett wasn't happy with a part of his game.

Having caught only 29 passes for 375 yards and two touchdowns in 2012, one might think that Bennett wasn't happy with his production as a wide receiver. But Bennett dealt with a hand injury for part of the season and missed four games, not to mention that any professional football player understands that the additions of Brandon Marshall and second-round pick Alshon Jeffery are going to limited your touches.

No, Bennett's focus had nothing to do with touching the football.

"Actually, last year, I didn't do too well blocking, so I made it a priority this year to get better in that area and just continue to work and get better at it because it helps you become a complete player," Bennett said.

With 26 catches for 208 yards and three touchdowns this season, Bennett understands his role as the No. 3 wide receiver and fifth receiving option on the team (running back Matt Forte has 65 receptions and tight end Martellus Bennett has 53), so he has committed to helping out in other ways.

As a result, Bennett has become a key part of what is undeniably the best wide receiver blocking trio in the NFL.

According to Pro Football Focus' blocking grades, Brandon Marshall is far and away the best blocking wide receiver in football with a grade of 13.7. The next closest player is Pittsburgh's Jerricho Cotchery, who has a grade of 6.0. Tied for sixth on the list is Earl Bennett, with a grade of 3.2, and further down at 14th is Alshon Jeffery, with a grade of 2.3.

Two other NFL teams have two players among Pro Football Focus' top 14 blockers, but no team has three like the Bears. Denver's duo of Demaryius Thomas (3.1) and Wes Welker (2.4) is good, as is Washington's Santana Moss (3.0) and Josh Morgan (2.4). It should also be mentioned that Redskins wide receiver Pierre Garcon ranks 20th with a grade of 1.8, giving Washington a solid blocking trio, but not one as good as the Bears'.

Wide receiver blocking often goes unnoticed by fans, but not by offensive coaches. A receiver's primary job is to help the offense by catching the football, but their blocking abilities can open up a playbook in ways other teams' can't.

"I think your perimeter runs certainly are impacted more in the running game," Bears head coach and play caller Marc Trestman said. "Our guys take a lot of pride in it. They understand that Matt Forte is blocking and protecting for them when they're running routes at times. It's a connected issue that the other 10 guys count, whoever has the football. That's a way of showing that they've bought into the fact that people are doing things for them to get open when we have to throw the football. They're going to counter that with effective play on the perimeter when they're involved in the running game."

The film shows Trestman has taken advantage of his perimeter blocking this season in a variety of ways (we'll get to that shortly), but the numbers prove it too.

The Bears have run right end 50 times, ranking sixth in the NFL. When doing so, they are averaging 5.70 yards per carry, also 10th in the league.

The only other direction the Bears are more successful running the football is behind right guard Kyle Long, where they are averaging 6.08 yards per carry (third in the NFL) on 51 carries (11th).

But simple runs to the outside are just one way the Bears take advantage of their receivers' blocking ability. That much was evident in Monday's 45-28 win over the Cowboys, which produced some of the best wide receiver blocking film you'll ever find.

Here's your simple run to the perimeter. It's a misdirection pitch to Matt Forte as the offensive line sells an inside run and Josh McCown fakes the handoff to fullback Tony Fiammetta before pitching it to Forte. The running back gets to the outside and his two primary blockers are...

Forte (circled in red) picks up 12 yards and another first down. 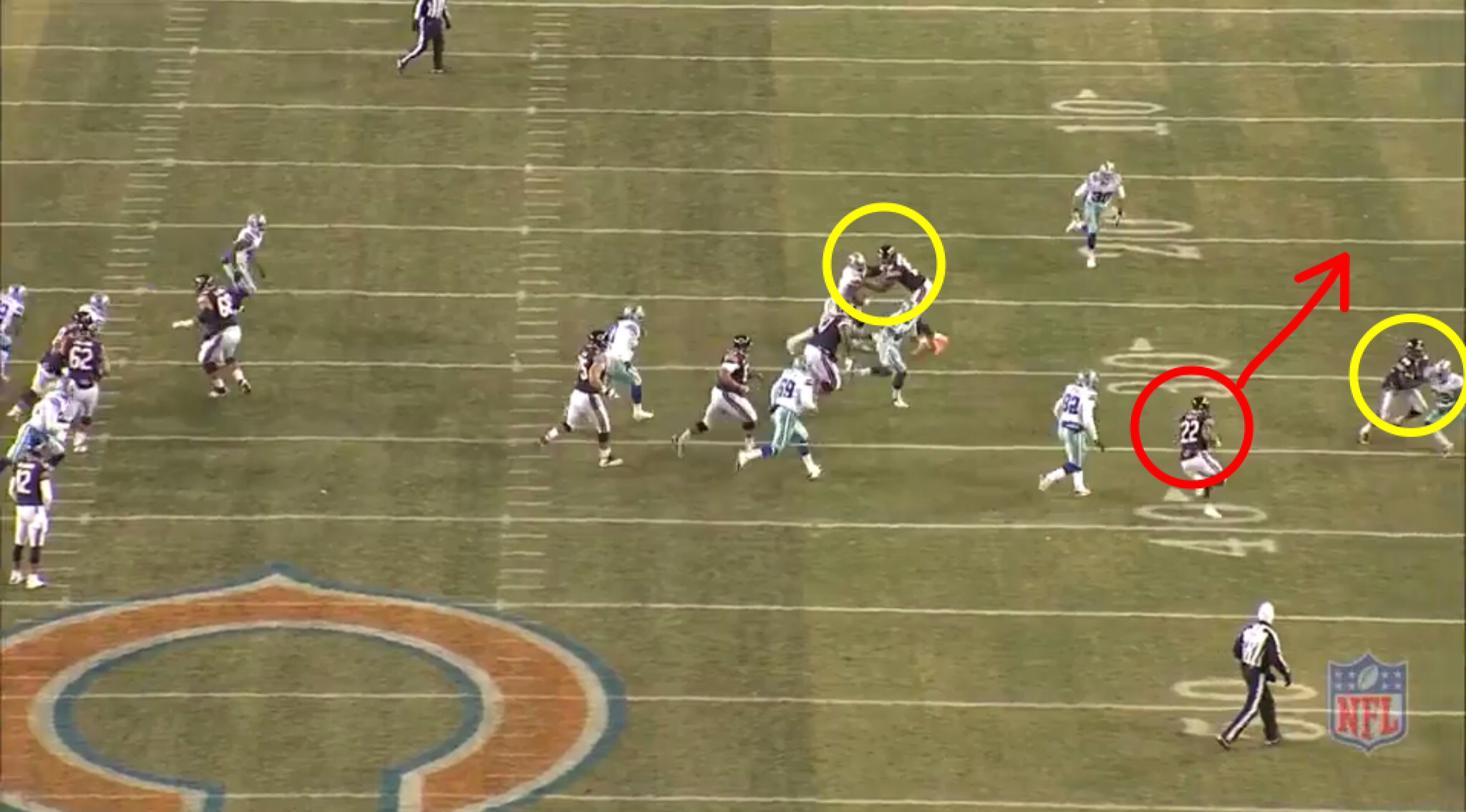 Pretty simple stuff, right? And yet, it's a play that isn't possible without receivers who can execute the blocks.

So let's get more complicated. Trestman loves getting the ball to Alshon Jeffery in space where Jeffery can pick up yards by running with the football already in his hands. He's done this with end-arounds, but also with bubble screens.

Here's how the Bears' originally line up, with Jeffery circled in red, tight end Martellus Bennett in blue and wide receiver Brandon Marshall in yellow: 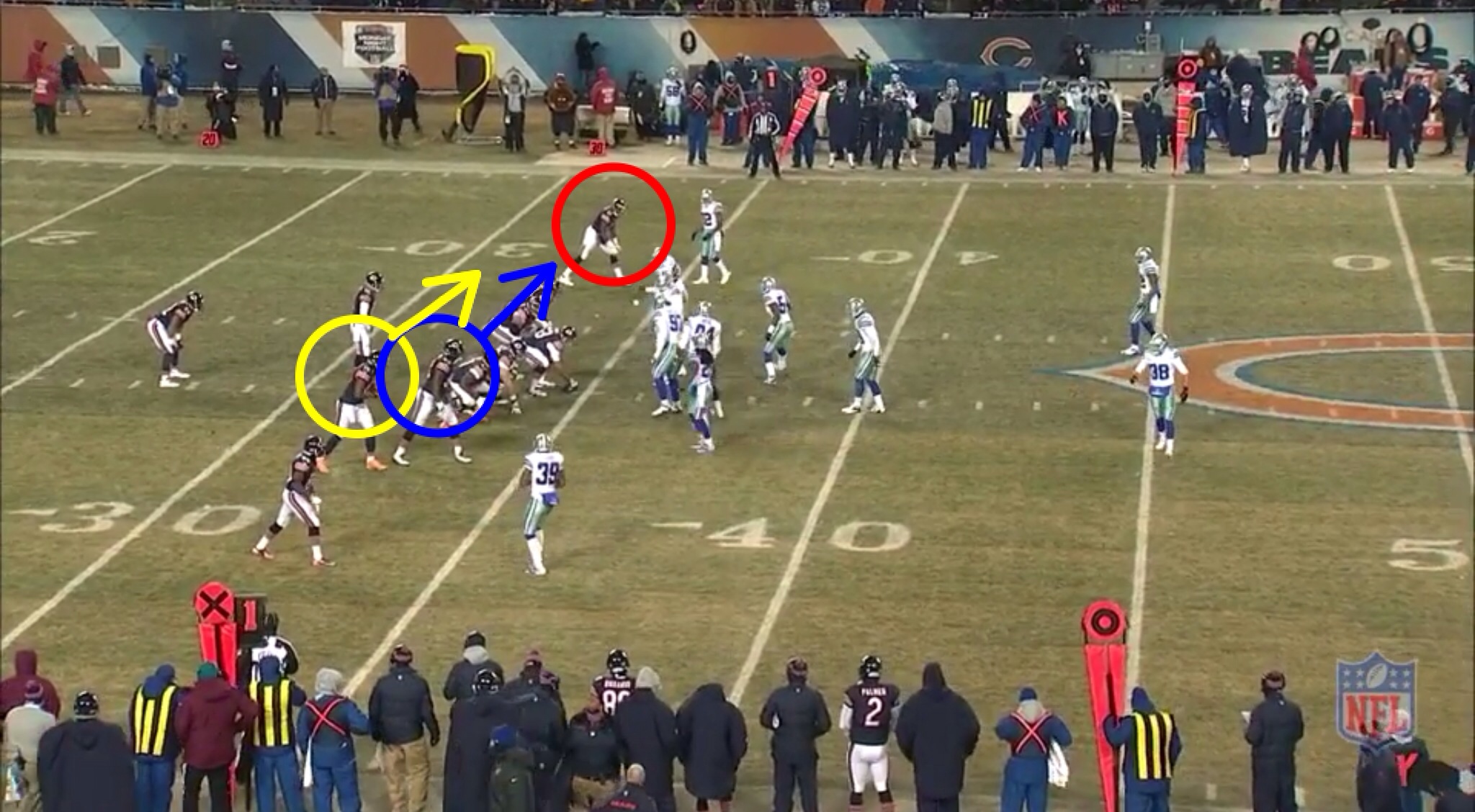 Before the snap, both Bennett and Marshall go in motion to Jeffery's side and will become his blockers. Notice McCown went from shotgun to under center too. Right before the snap, McCown raises his left hand up in the air and Jeffery goes in motion towards his quarterback: 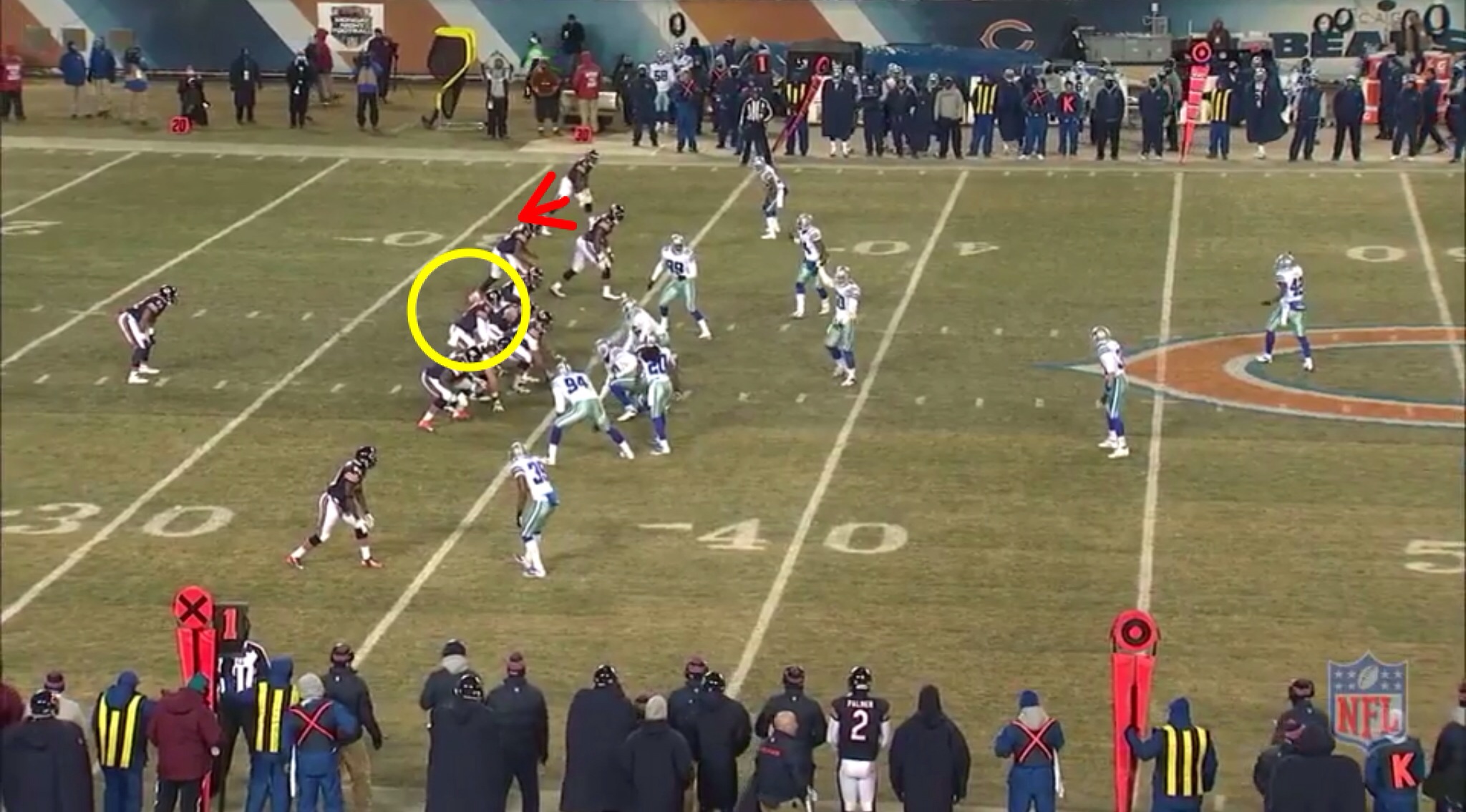 McCown quickly fakes the handoff to Forte, turns around and fires the ball to Jeffery, who sees this: 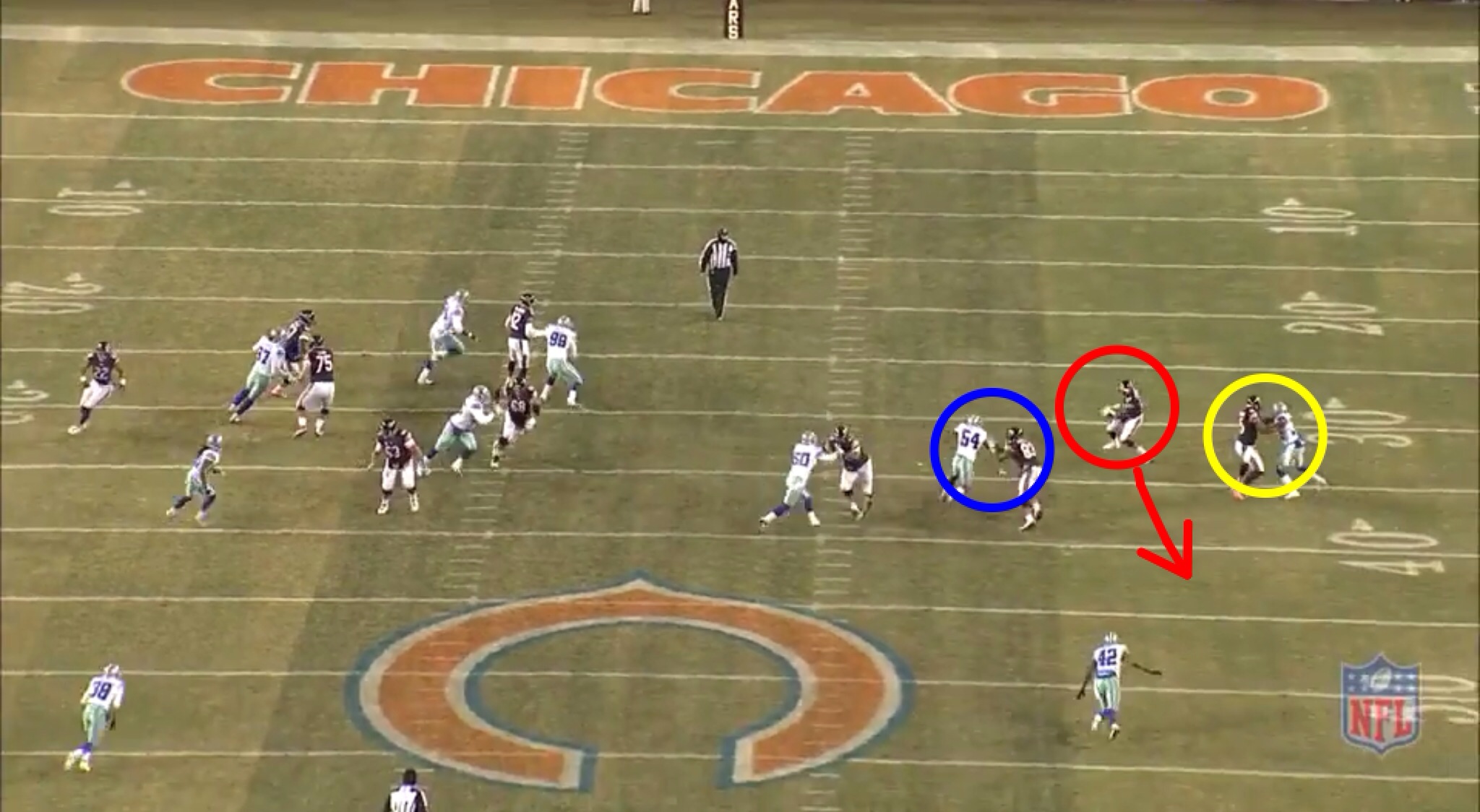 Martellus Bennett and Brandon Marshall create the hole for him, with Marshall sealing cornerback Orlando Scandrick on the outside. Jeffery picks up 11 yards and another first down.

Later on the drive, Marshall lays the hammer down with his best block of the season:

This is not a designed play, but still shows Marshall's value as a blocker. As the play breaks down, McCown (circled in red) scrambles to his left. At this point, Marshall (circled in yellow) is still asking for the ball. He's a receiver. He wants the ball first. 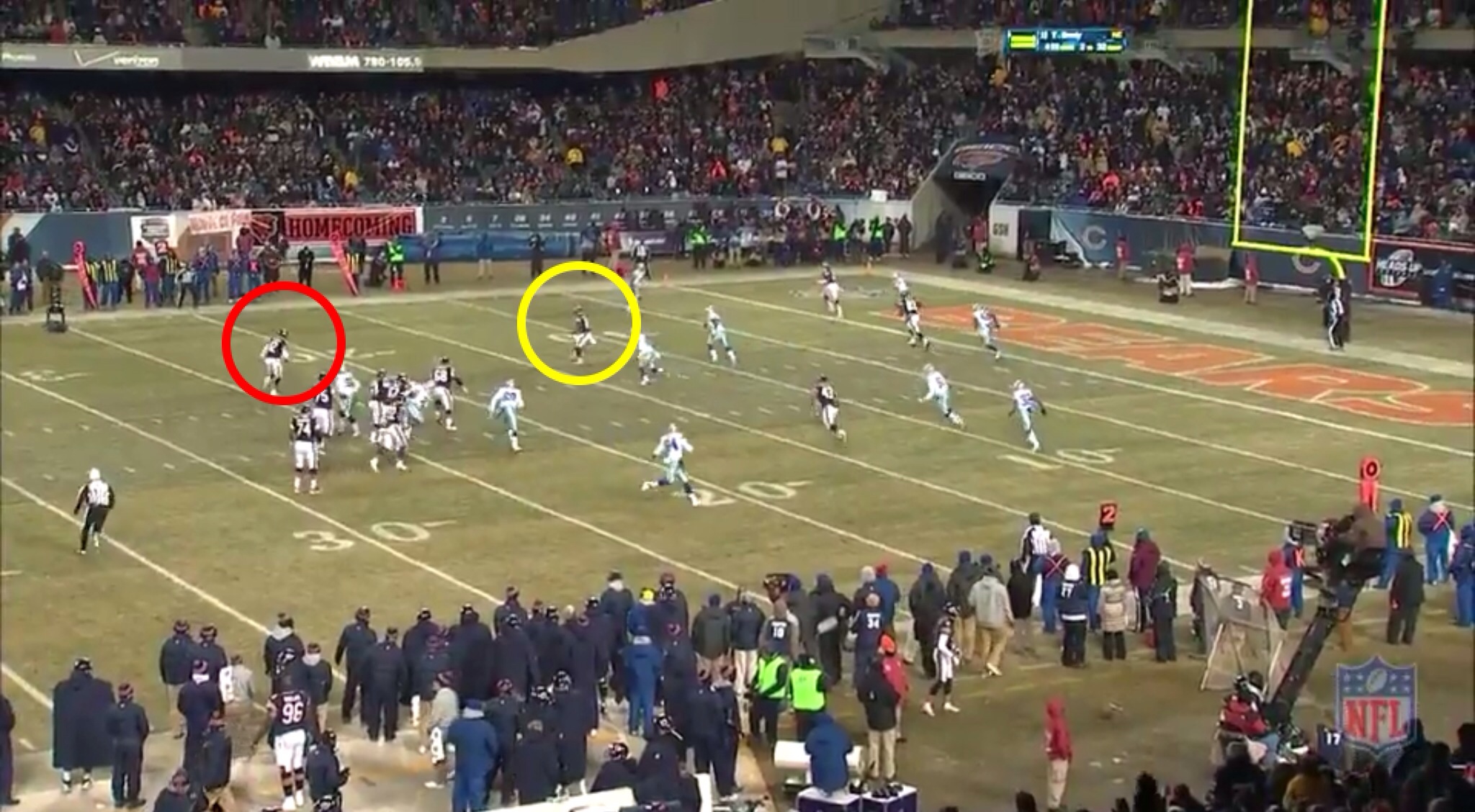 But McCown sees the first down marker and thinks he can get there on his own. As soon as Marshall realizes this, he eyes up his block: 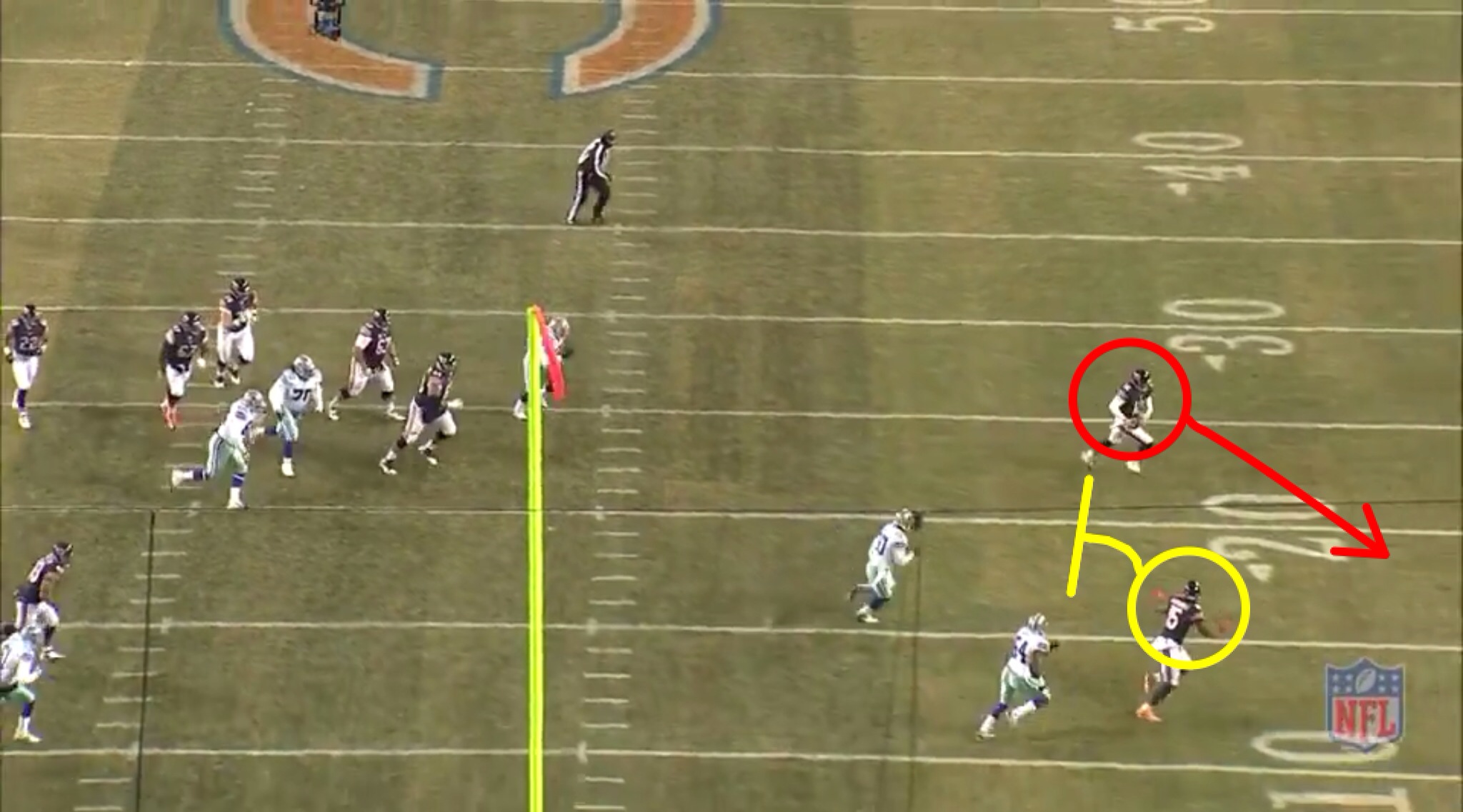 What happens next is unfortunate for Cowboys linebacker Sean Lee: 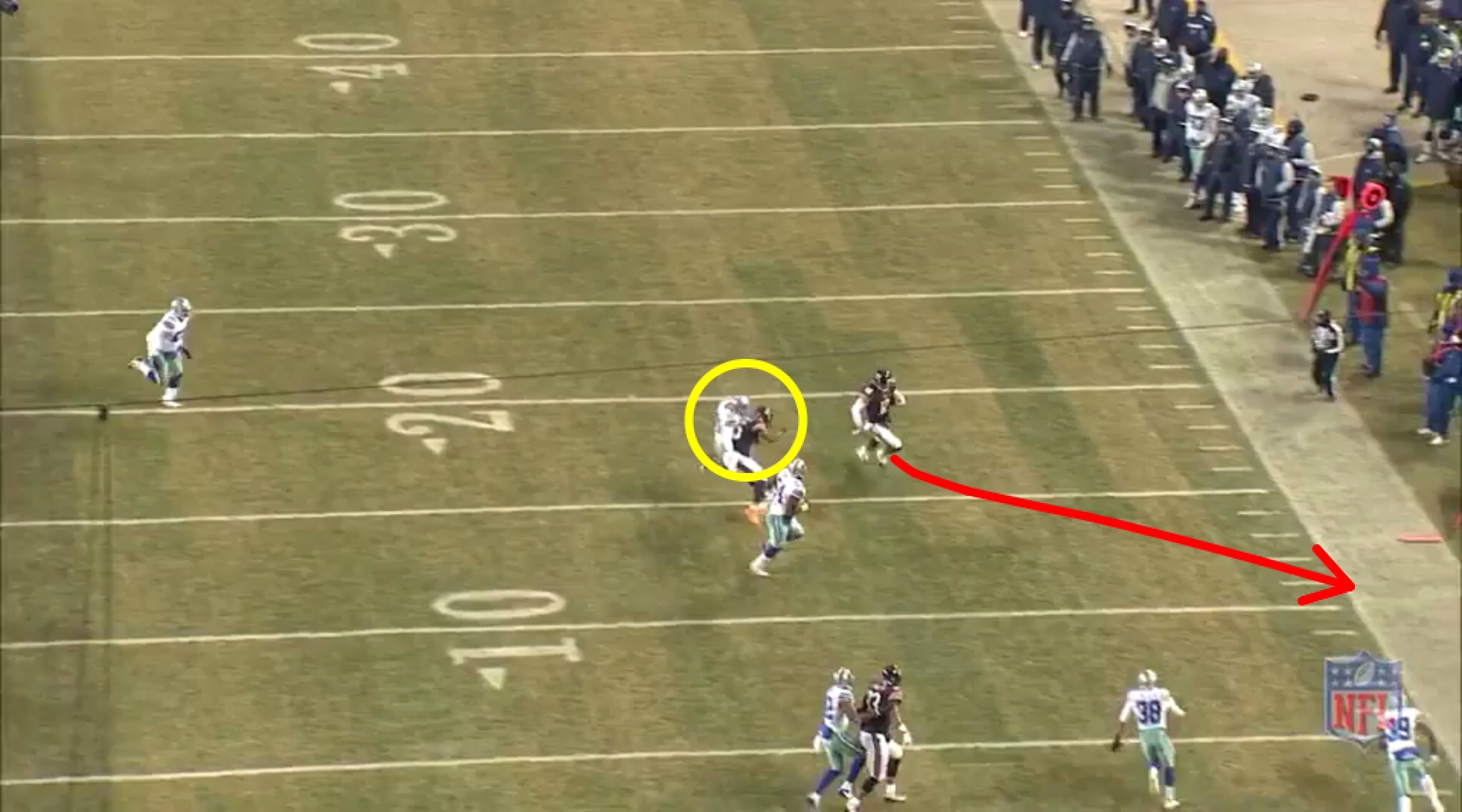 Blocking has become such a point of pride for the Bears' wide receivers that Earl Bennett said they have a friendly competition to see who can land the best block each week. Obviously, Marshall won this round.

"Definitely. That was a clean, good, 'stay off my quarterback' hit," Bennett said.

Now, back to the designed plays built around the receivers' blocking ability:

It would be unfair not to give both of the Bears' offensive tackles credit for playing a role in the team's success on the perimeter. Trestman has successfully pulled both left tackle Jermon Bushrod and right tackle Jordan Mills to the outside many times this season on successful plays.

This is one of those plays.

It's a simple screen to running back Michael Bush with Mills and Marshall (circled in yellow) serving as the lead blockers. Here's how the play sets up as Bush catches the football: 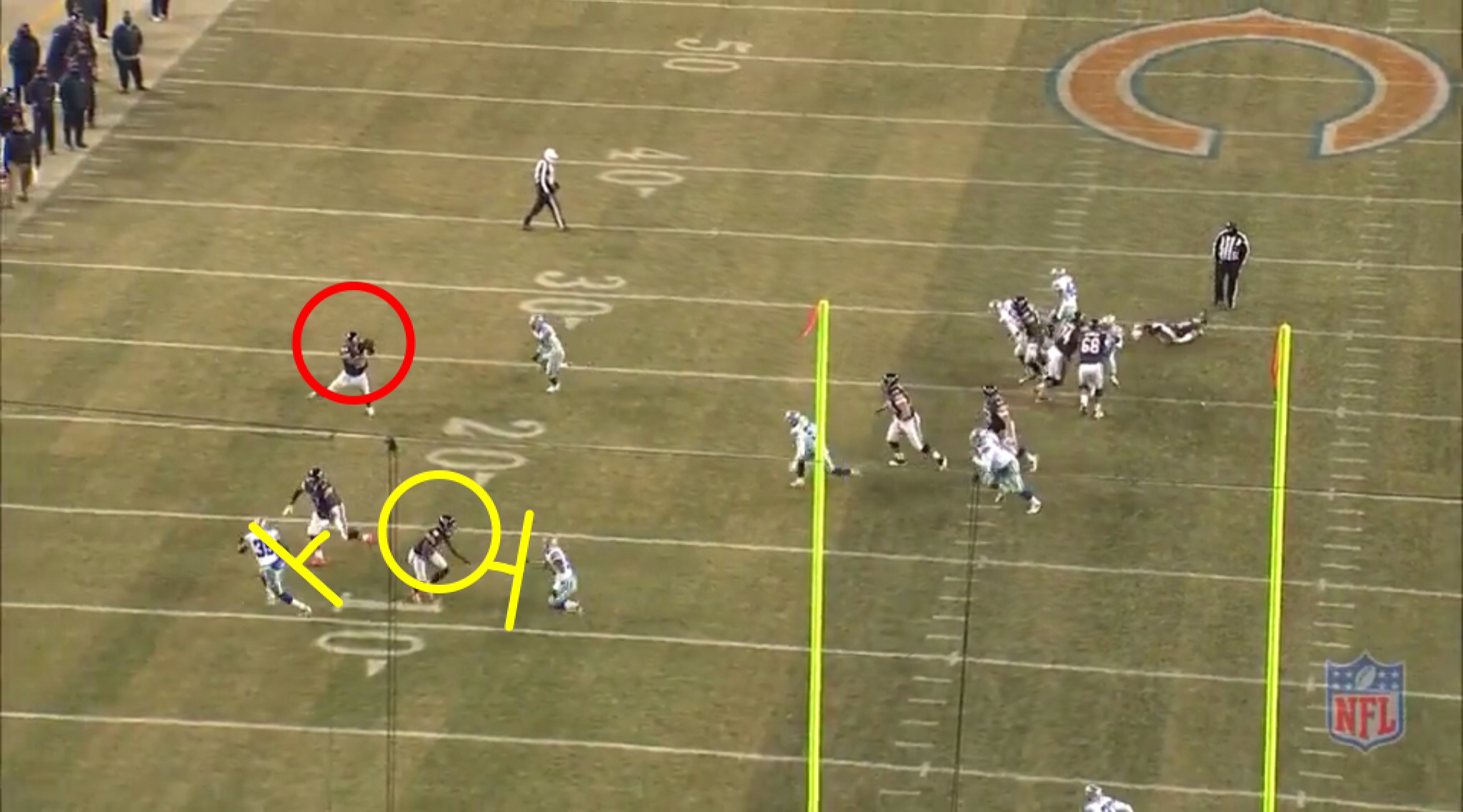 Note where Marshall is on the field, lining up linebacker Ernie Sims around the 12-yard-line. Marshall locks on at the 10-yard-line and doesn't let go, giving Bush this path to the end zone: 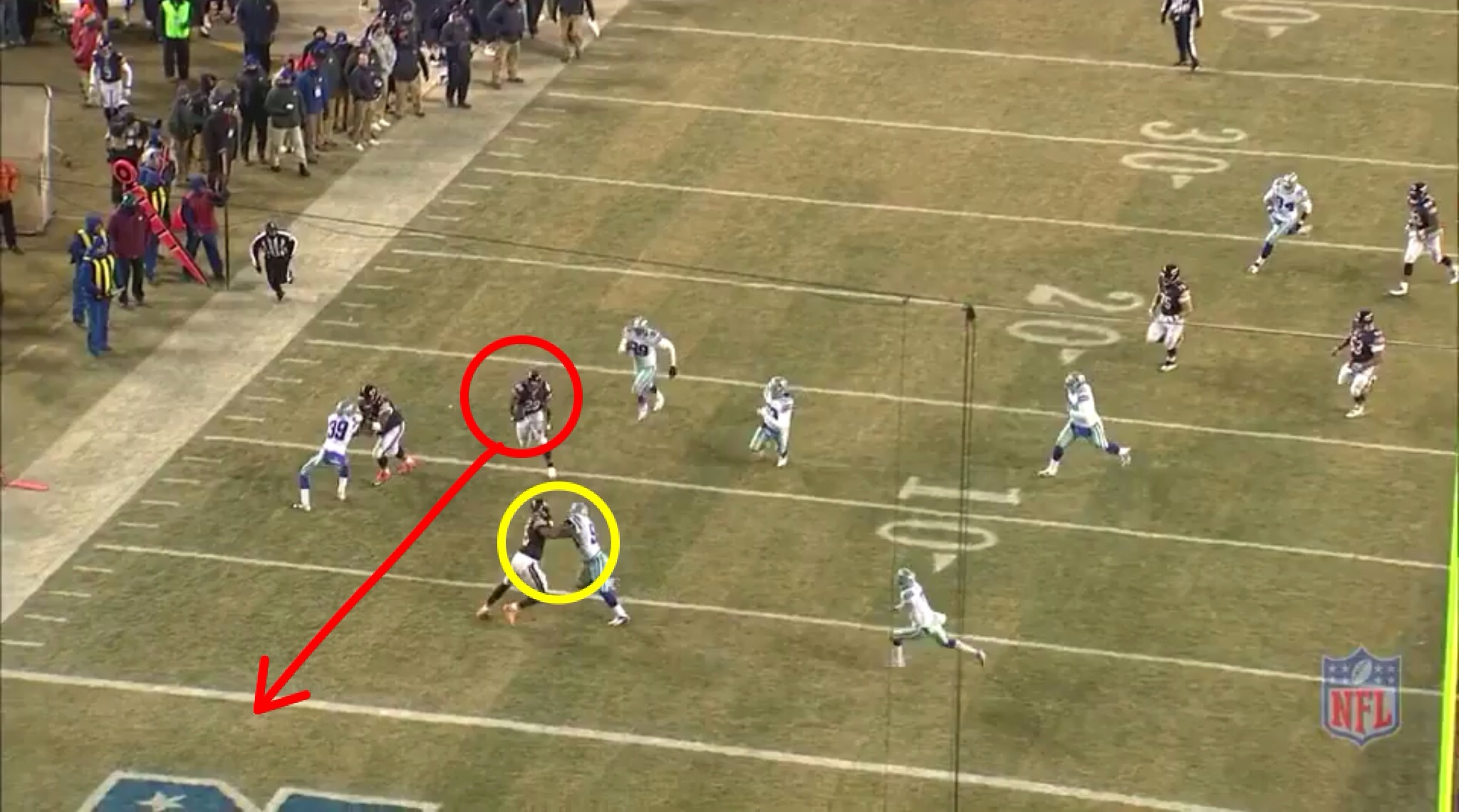 Let's not leave Alshon Jeffery out of the block party though. He gets in on the action on the next drive:

On this play, Forte cuts to his right where Jeffery is his only blocker on that side of the field. No worries. Jeffery locks on to Scandrick and Forte picks up 18 yards. 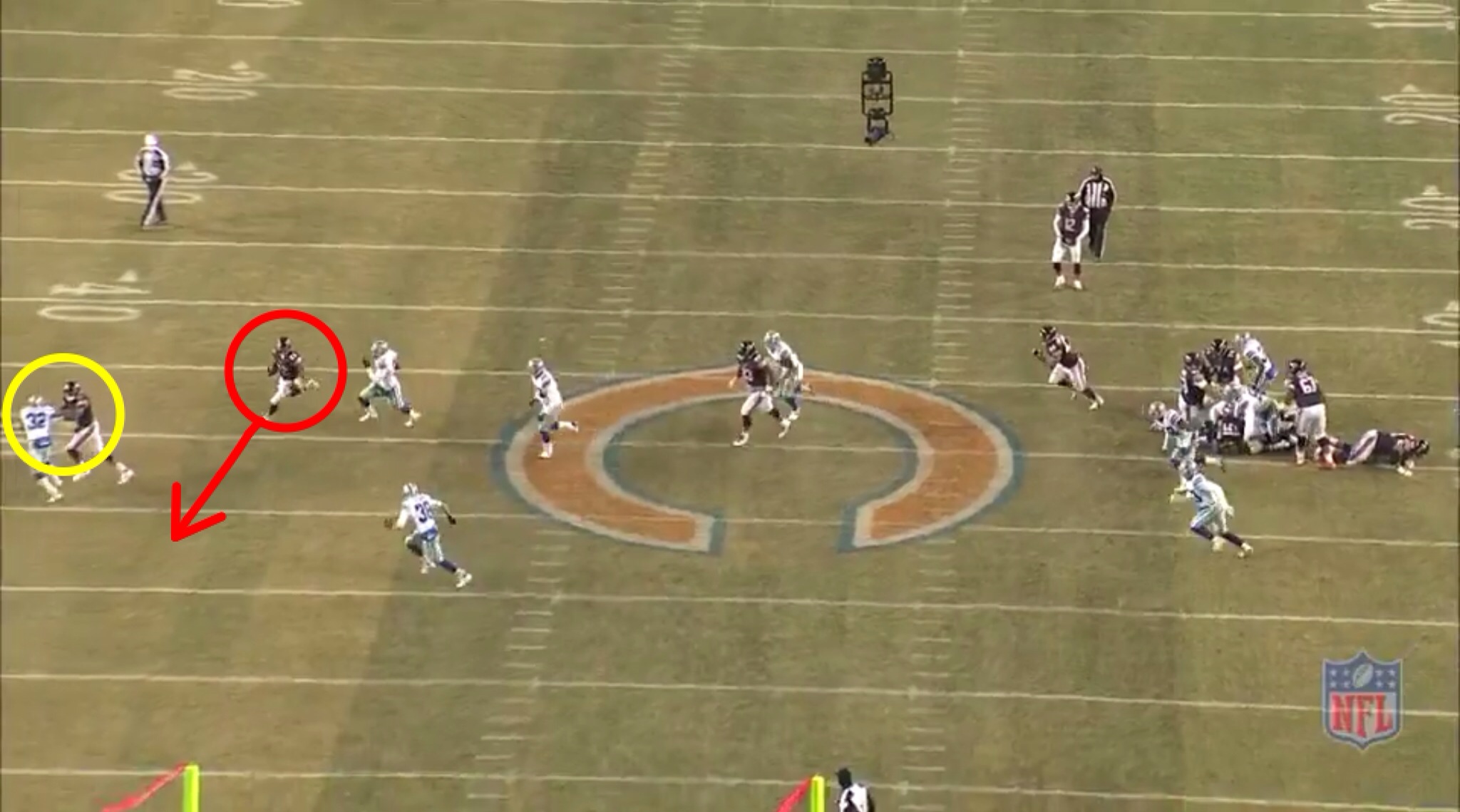 This play put the Bears deep into Cowboys' territory where they tacked on a field goal to score their last points of the game and seal the win. 45 points in the fourth coldest game in franchise history.

Even if it came against the lowest-rated defense in the NFL, the Bears put up big numbers. The stat book shows the following:

Not in the stat book, however, are all the blocks previously shown and the ones that didn't make this story. Those only live on the game film, which of course, the three wide receivers love reviewing.

Remember that friendly competition? It's not just about the big hits.

"We have friendly competition on who got the best block and who can spring Matt (Forte) and who can run the longest down the field and help him score," Bennett said.

Give Earl a point for that last part:

Look where Earl Bennett (circled in yellow) is lined up on this play: 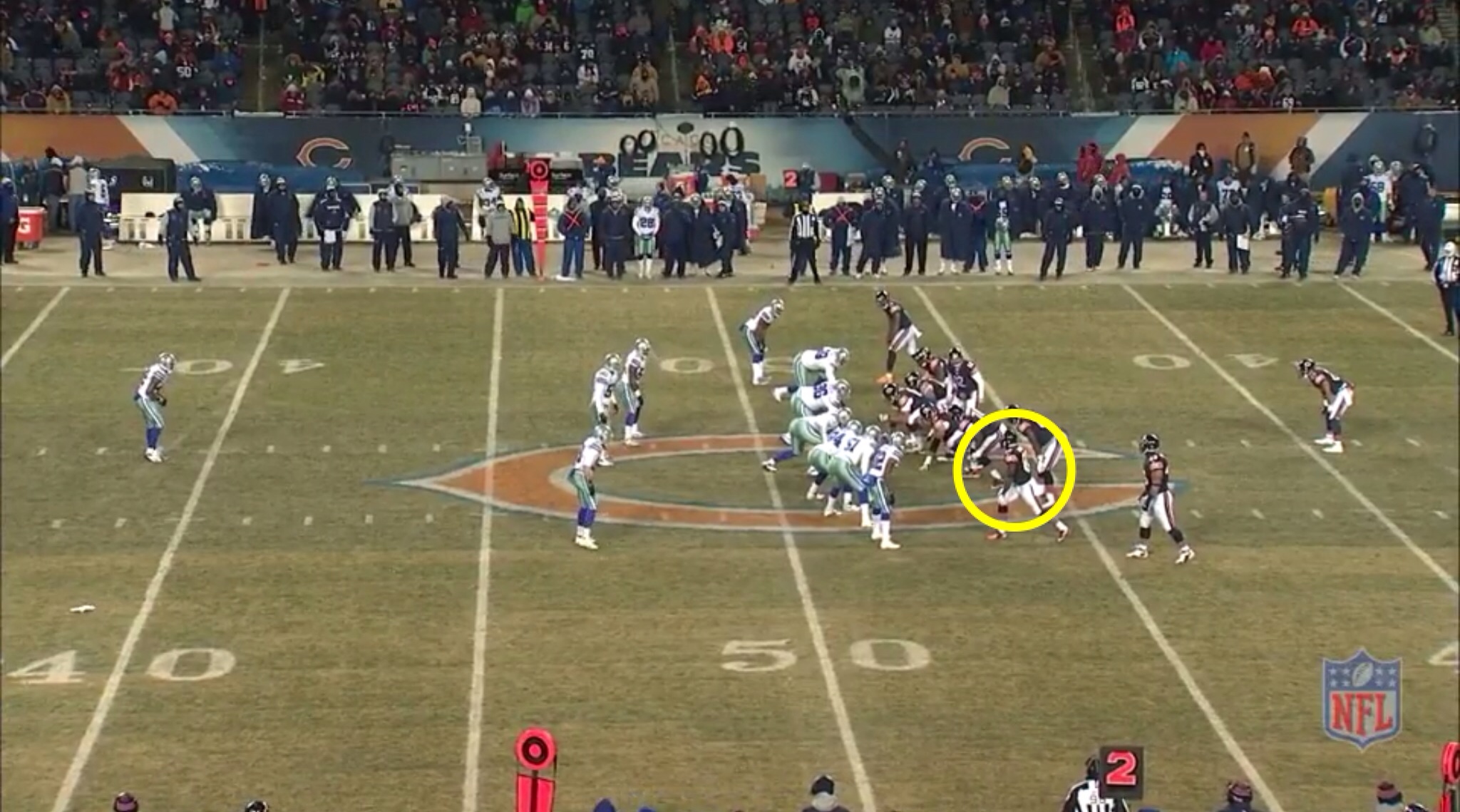 Now let's take a look at where he ends up. This is a screen pass to Forte on the opposite side of the field: 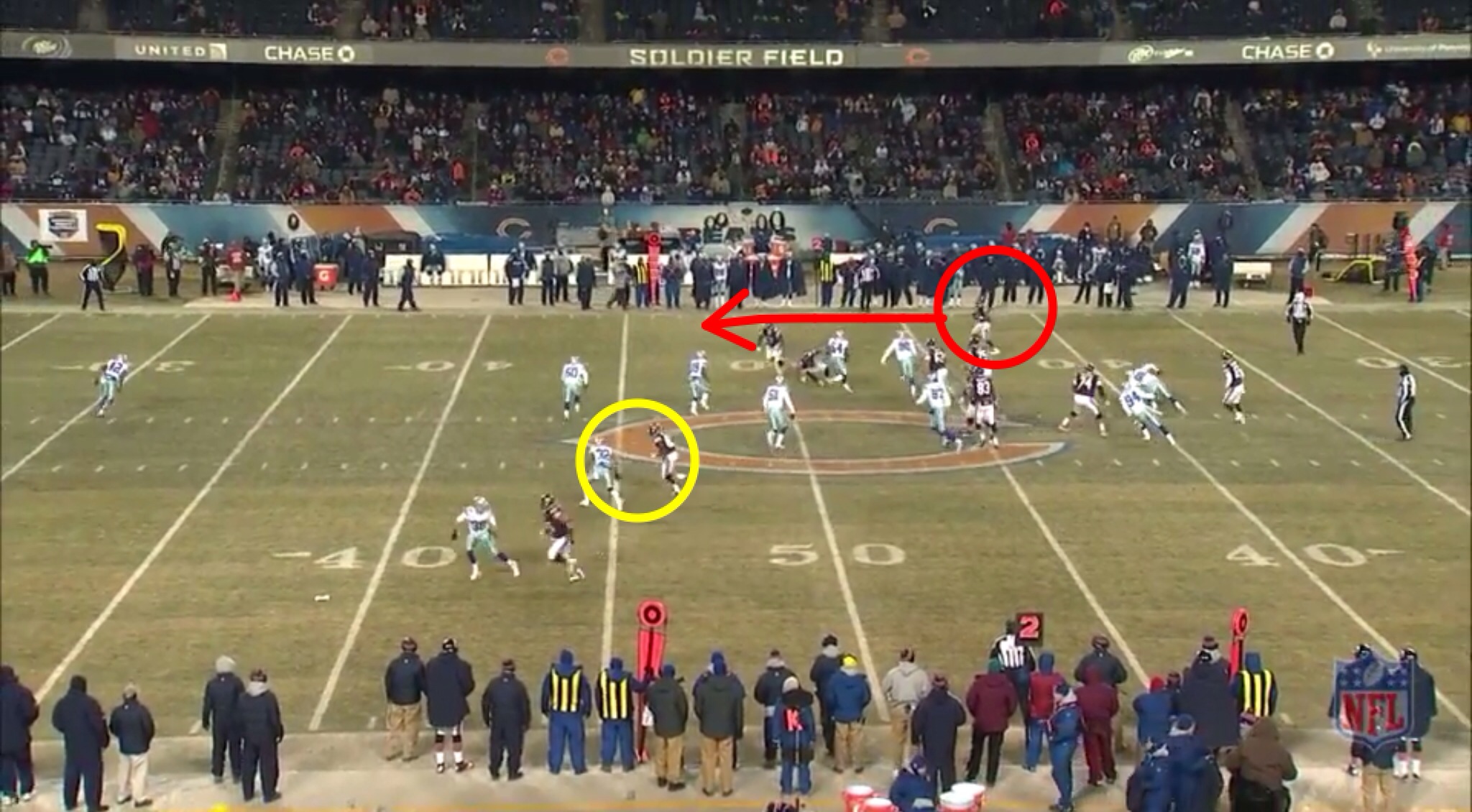 Bennett is certainly not a primary blocker on this play, but that doesn't mean he doesn't bust his ass down field anyway. Forte ends up slipping a bunch of tackles before finally getting dragged down from behind at the 18-yard-line. And take a look at where Bennett is: 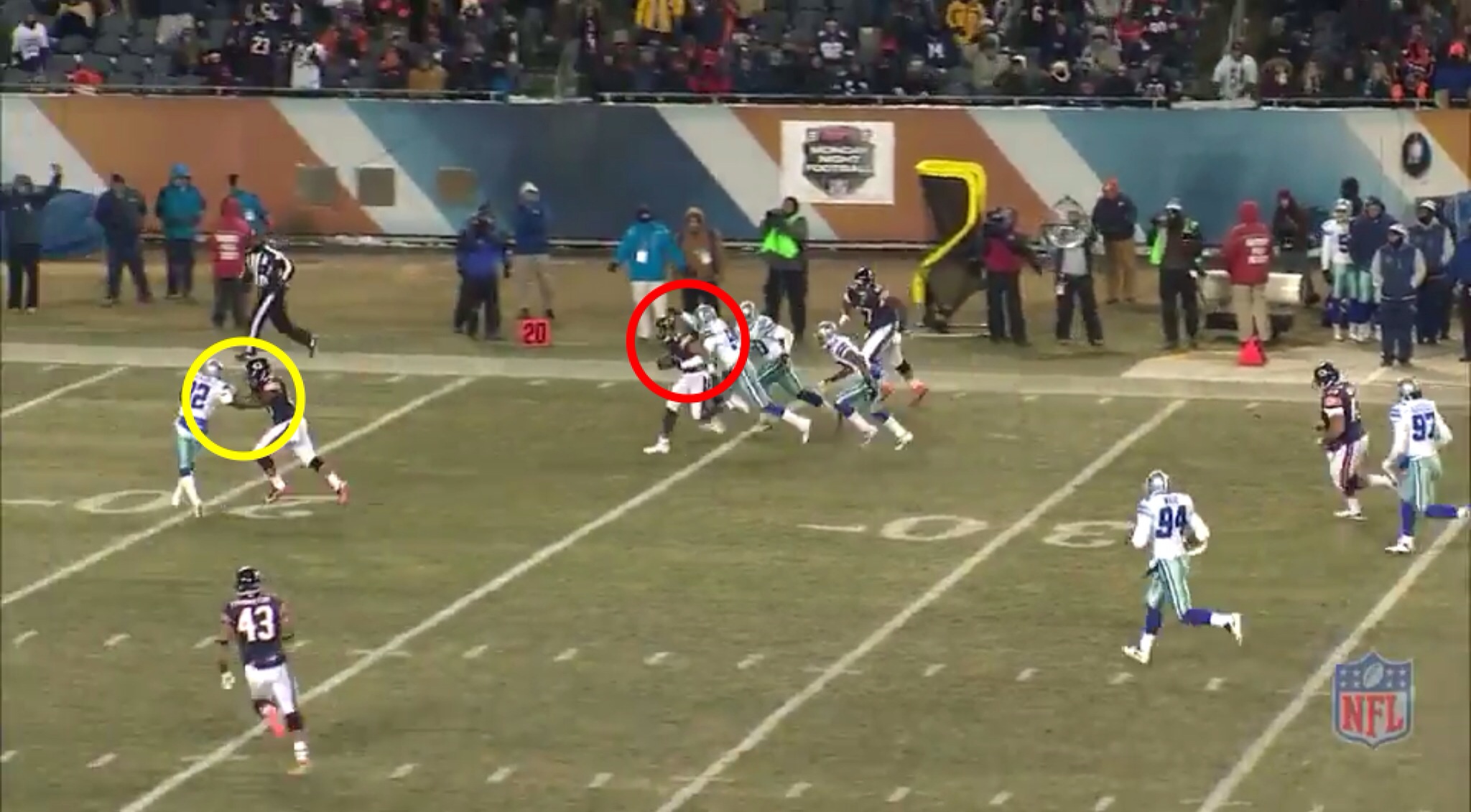 This effort goes unnoticed because Forte is tackled from behind, but if he slips that last tackle, Bennett seals a touchdown with his block on Scandrick. When the play ends, Bennett is standing at the 14-yard-line, 38-yards from where the play started -- where he initially lined up on the other side of the field.

Remember what Trestman said about every player mattering on every play?

"It's a connected issue that the other 10 guys count, whoever has the football."

And wherever he has it.

Bennett running 38 yards downfield on a screen designed on the other side of the field epitomizes what Trestman is talking about.

And it's safe to say that kind of effort is not going unnoticed inside Halas Hall.