And the obsession with Holmes' history doesn't stop there. An illustration the serial killer's "murder castle" has now become available in the form of a puzzle.

The masterful work comes from Holly Carden, a Nashville-based illustrator, who has made both the puzzle and the print available through Kickstarter. 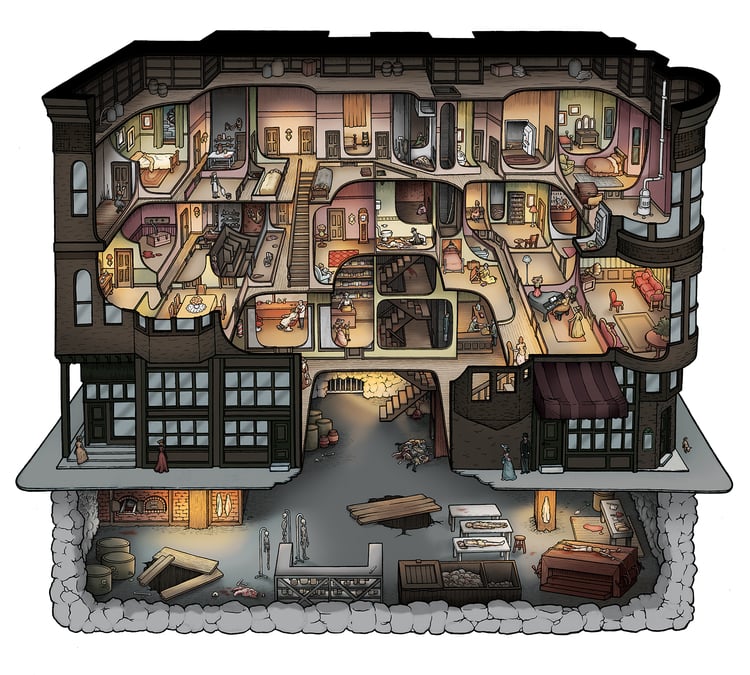 Holmes built a hotel at 63rd Street and South Wallace in the Englewood neighborhood, near the 1893 World's Fair in Chicago, where he lured unsuspecting women.

His victims would be trapped, tortured and eventually killed. The building had a labyrinth of rooms and trap doors that ultimately led to a basement torture chamber.

When he was finally caught, Holmes confessed to 27 murders, but the death toll was likely much higher. His victims may have totaled in the hundreds over the course of his life.

Carden got the idea for the illustration after reading Larson's "Devil In The White City" and listening to a podcast on the subject. Larson's book juxtaposes Holmes' madness with the beauty of Daniel Burnham's World's Fair--which became known as the White City.

To appreciate the level of detail of Carden's work, note the view of the Ferris Wheel (the crowning engineering achievement of fair) from one of the windows at the upper left.

"One thing I do wish to make clear is that I in no way intend to glorify what H. H. Holmes did by drawing the Murder Castle," Carden wrote on her Kickstarter page. "However, one cannot deny the sheer brilliance it took to pull this off. I can only imagine what this man would have been capable of had he used his powers for good rather than evil."

Carden's project has already exceeded its goal on Kickstarter, and she says the puzzles and prints should be available, starting in April.

Carden describes the artistic process in a blog post, saying the "illustration is intended to supplement books and podcasts on the topic and to help people visualize how the hotel that Holmes built might have looked and how it was used."

Holmes' house of horrors was destroyed in a fire in 1895. He was convicted and hanged a year later.

Carden, who almost didn't launch the Kickstarter effort, said she is "totally surprised at the reaction."

She has never been to Chicago, but might plan a long weekend--after she ships all of those puzzles.