CHICAGO (CBS) — Chicago's "Getting Hosed." Again. In our exposé of the City's bad water billing system, we've asked over and over  -- why hasn't anything been done to fix it?

When we couldn't get a straight answer from the City, we submitted a public records request for the City's internal emails. They inundated us in more than two-thousand pages of emails. Enough to bury us. But instead, we went through each page and found where their priorities lay.

From The Bush To Bureaucracy

In our two year investigation, no one has been more hosed than Rodney Andrews. CBS 2 Investigators began covering his saga with the Chicago Department of Water Management more than a year ago.

For more than 30 years, he's jostled Chicago's concrete jungle as a cabbie -- and before cabbie, combat.

Mr. Andrews is also a Vietnam Veteran, serving from 1969 to 1971 across Cameron Bay, Da Nang, and Cambodia. He's received eight medals for his service and witnessed the horrors of war.

But the hardest battle he's fought has been with the City of Chicago.

Mr. Andrews' problems began back in 2003, when he bought his home from a friend who was facing financial difficulties. The two agreed that the friend would repurchase the home from Mr. Andrews after two years – but his friend's finances never improved, leaving Mr. Andrews to assume the responsibilities of a property owner.

"I didn't know anything about a water bill since I had never owned a house before," Mr. Andrews said last year.

Even though Mr. Andrews never moved into the house and not a drop was used since his friend left, the water bills began increasing exponentially because the account was unmetered. Add to that -- Chicago's water rates have nearly quadrupled since 2002.

Mr. Andrews is one of 180,000 Chicagoans with an unmetered account, which are predominately on Chicago's South and West sides. Having an unmetered account means the City bases his bills on property size and plumbing fixtures – not actual water usage. Whether he uses zero gallons or a million gallons, he foots the same bill.

For unmetered account holders to end water service, they must register the home as vacant with the Department of Buildings.

Registering a house vacant costs $300 every six months, and $600 if you fail to register it on time. Mr. Andrews would have paid the City more than $8,000 over the past 14 years just to not live in his home, according to these rules.

CBS 2 Investigators found that Mr. Andrews did register his house as vacant -- three times -- in 2009, 2012, and 2013. Each of those registrations should have turned off the water and ceased billing, but the City biffed its own policy.

That's when we stepped in.

The Runaround At City Hall

After our first story on Mr. Andrews' outrageous bill aired, an anonymous donor stepped forward and offered to pay his $10,700 bill.

"I couldn't imagine that the city would be putting anybody through this, much less one of our veterans," the anonymous donor said.

Mr. Andrews, however, was determined to fight the bill on principle. He teamed up with CBS 2 Investigator Brad Edwards and the two went to City Hall in pursuit of a fair bill.

What transpired was the epitome of a run-around. After being shuffled from one office to another, they ended up exactly where they started -- with no answers and no resolution from the City.

After that story aired, CBS 2's Edwards posted a tweet about the City Hall runaround. That post caught the eye and ire of Ald. Gilbert Villegas (36th). 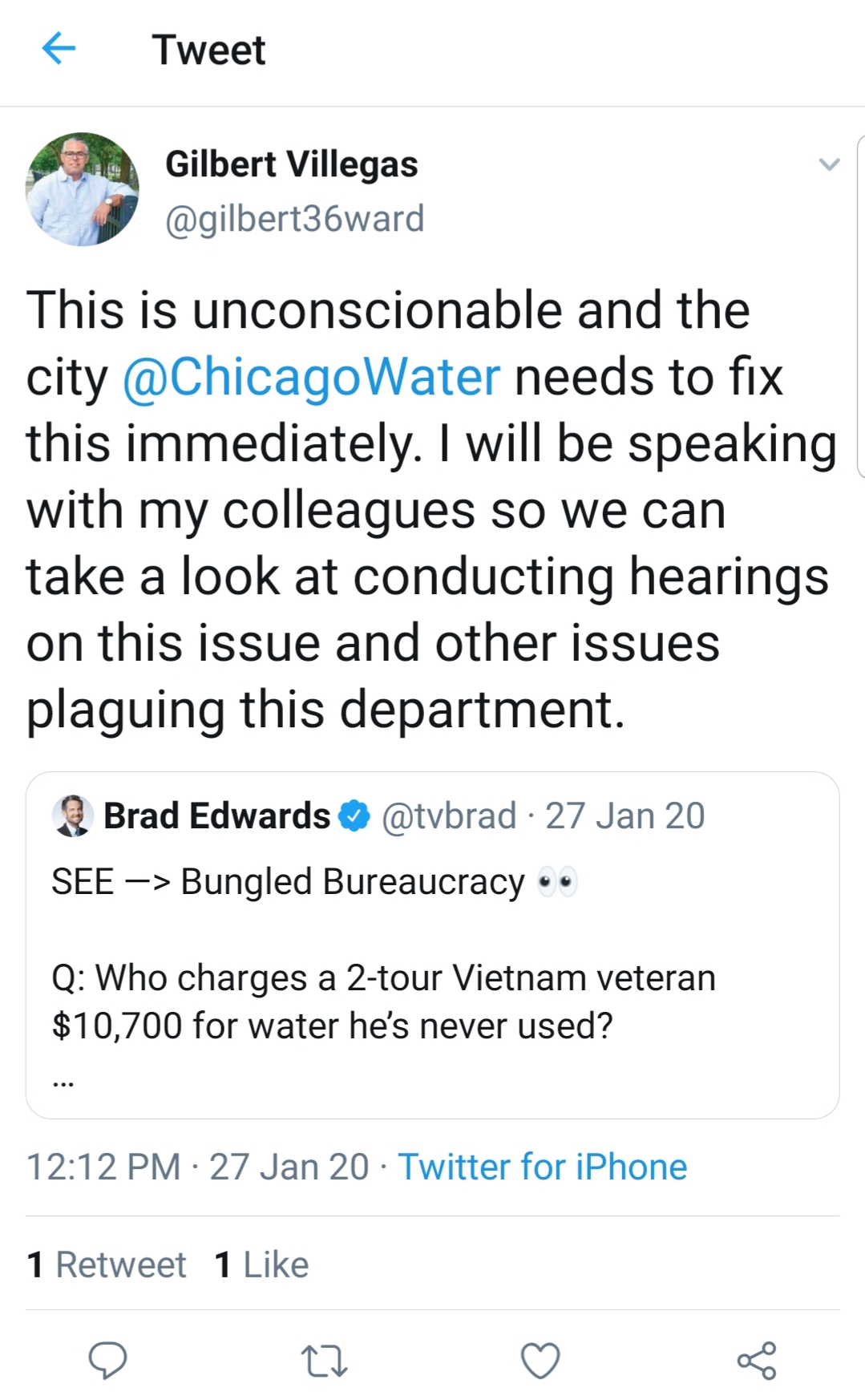 In his post, Ald. Villegas' called for "hearings" about "issues plaguing the department."

Through a public records request containing more than two thousand pages of internal City emails, we found that one hour and one minute after Ald. Villegas' tweet, City officials began a chain email that ended with four words: "I just called Gil."

Ald. Villegas, the then-floor leader on the City Council, had already invited CBS 2 Investigators to an in-person meeting on the bungled system. After the "I just called Gil" email, he canceled on us, rescheduled, then canceled again.

Nearly one year after those canceled meetings, and 24 hours before our story was set to air, we finally had that meeting with the alderman.

"It just seems odd to me that you were so fired up that you were about to call hearings, and an hour and a minute later the Chief of Staff calls you, and then you completely ghost on me," said Edwards.

"After I tweeted that, he called me and assured me that the problem would be addressed regarding the veteran, and I took him at his word," Ald. Villegas said.

The alderman also tells us that he's overseeing a committee assessing the City's technology -- technology that involves pitfalls such as the City's failure to shut off Mr. Andrews' water after it was registered vacant three times.

"The systems do not speak to one another," Ald. Villegas said. "It's antiquated and we have to address that issue."

But this honest admission is a stark contrast to the City's typical, callous response. When asked about Chicago's regressive billing policies in the fall of 2020, Mayor Lori Lightfoot told CBS 2 Investigators she was "not familiar with overcharges."

While the Mayor feigns awareness for homeowners struggling with an archaic billing system, a group of Good Samaritans, moved by Mr. Andrews' plight, were eager to pitch in.

"If we don't pay it forward, then what's the sense of doing what we do?" said Dan Macias, the President of the Illinois Plumbing Inspectors Association.

He was among the many who generously donated their time and energy to helping a Vietnam Veteran who was abandoned by the broken bureaucracy he risked his life to protect.

One by one, they rebuilt Mr. Andrews, turning his once vacant house into a home.

That post catalyzed another chain of City emails in which officials proved to be more concerned about CBS 2 winning an Emmy Award than they were about fixing a broken system. 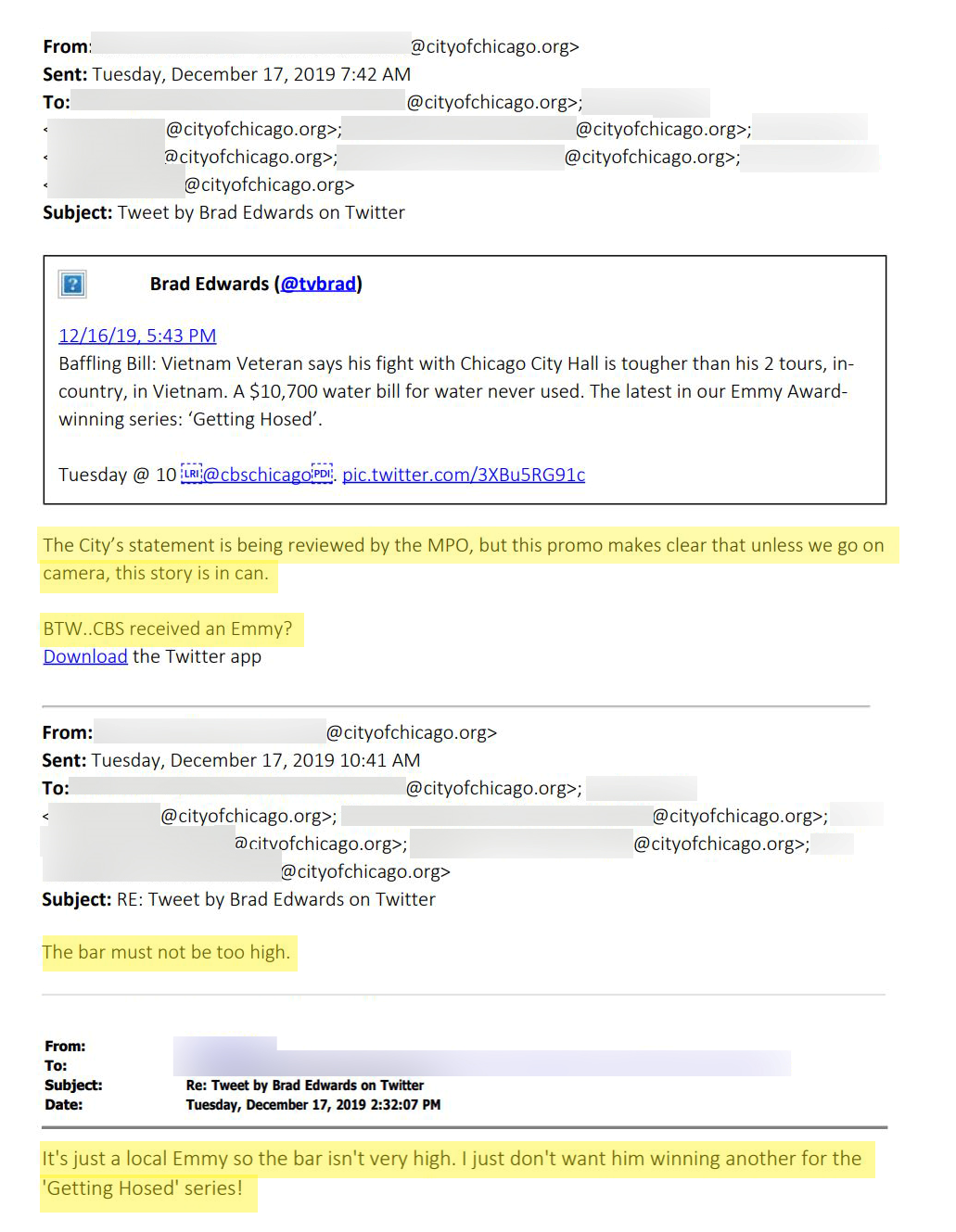 To their dismay -- the "Getting Hosed" series did win a second Emmy award this past fall.

The remaining balance was paid off by an angel donor.

Rodney Andrews is back behind the wheel, conquering the concrete, and at last, in the driver's seat.

Getting Hosed: Vietnam Veteran Gets Hosed and Bulldozed By The City

Getting Hosed: Bad Water Bills Aren't Chicago's Only Problem -- Many Residents Are Drinking Lead-Laced Water
More
Thanks for reading CBS NEWS.
Create your free account or log in
for more features.