(CBS) Once the Eagles shift into high gear and run their up-tempo, no huddle offense, they put a defense on its heels, both from a fatigue and assignment standpoint.

As I touched upon in my Know Your Opponent series, Philadelphia Eagles head coach Chip Kelly's offensive system is rooted in simplicity. Kelly creates conflict by deploying a variety of formations, but his goal is simple: take what the defense gives you.

When the pace of plays hastens, substitutions are eliminated and defenses often declare their intentions pre-snap. In turn, the quarterback's decision making process is simplified, allowing him to get the offense in a potentially advantageous situation.

A common reaction from opposing defensive coordinators has been presenting eight-man fronts in Cover-1 man free coverage. The thinking here is crowd the box to take away running lanes and man up on receivers.

One of Kelly's primary answers to this defensive alignment and coverage scheme has been to run "mesh" route concepts. Mesh routes are crossing patterns to create traffic over the middle of the field, designed to pick or "rub" defenders off and free up a receiver in the process.

A wrinkle the Eagles have added to their mesh concept is using "wheel" routes with their speed players - running back LeSean McCoy and wide receiver DeSean Jackson - to get them the ball in space on the perimeter of the field. While the mesh routes force a defense to cover the field horizontally, the wheel route stretches a defense vertically, typically for explosive plays.

Against the Cardinals, the Eagles come out in '21' (two running back, one tight end) personnel. The Cardinals respond with their 'nickel' (five defensive back) personnel in a 2-4-5 alignment.

The Eagles motion running back Chris Ward out of the backfield and into the slot, and Cardinals linebacker Daryl Washington follows him, telling the Eagles the Cardinals are in man coverage. 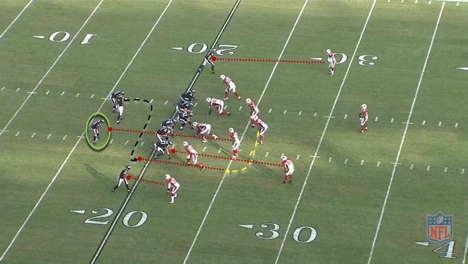 Ward's motion leaves the Eagles in a trips formation to the right in a 3x1 alignment, with wide receiver DeSean Jackson (circled in green) offset to the right of quarterback Nick Foles. The Cardinals walk speedy cornerback Patrick Peterson into the box to cover Jackson.

The Eagles run their mesh concept, sending their trips receivers at different levels across the formation, as Riley Cooper drags underneath the traffic. 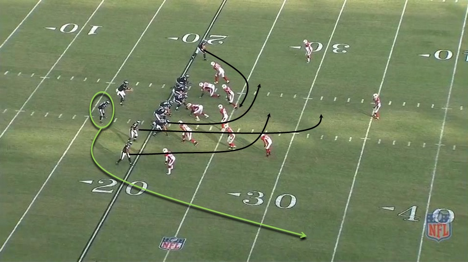 Foles holds the single-high safety with his eyes, by looking at the underneath mesh of Cooper and tight end Brent Celek. Polk and wide receiver Jason Avant essentially "pick" Peterson on this play, forcing him to "work through the trash" of four players as they sneak Jackson "out the back door" on the wheel route. 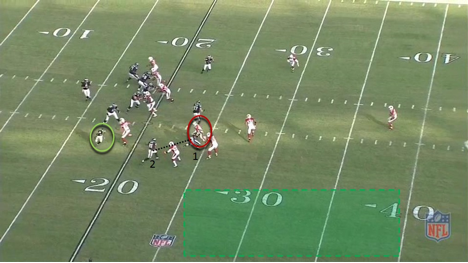 As fast as Peterson is, this split-second he's forced to work through traffic provides enough time for Jackson to get to the perimeter for a big gain.

Kelly showed innovation on this play, self-scouting their own tendencies and scheming a play for Jackson to get a clean release out of the backfield into the open field.

The next example comes from the Eagles game against the Redskins. The Eagles come out in '12' personnel (one running back, two tight ends) in a 'YY' formation, with Foles in the shotgun and running back LeSean McCoy offset to the right.

The Redskins respond by crowding the line with their base 3-4 personnel in Cover-1 man free coverage with free safety Brandon Merriweather helping over the top of DeSean Jackson, who is aligned in the left slot.

Again, the Eagles run their mesh concept over the middle of the field. 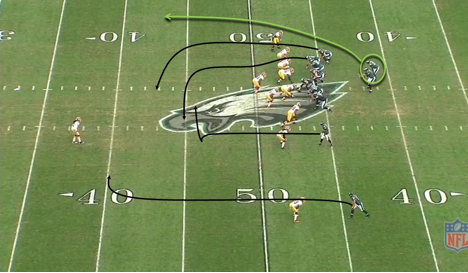 Instead of using a "banjo" technique – exchanging man-coverage responsibilities – the Redskins assign outside linebacker Ryan Kerrigan (circled in maroon) against McCoy out of the backfield, which is a mismatch the Eagles exploit.

Not only is Kerrigan not fast enough to cover McCoy, the Eagles force him to work through the two 'Y' receivers, tight ends Brent Celek and Zach Ertz. 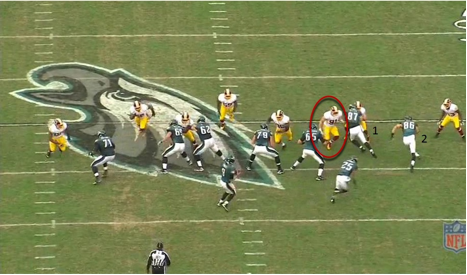 Foles immediately identifies the mismatch and threads a pass over the top of Kerrigan to a streaking McCoy for a huge gain down the sideline, setting up an Eagles touchdown. 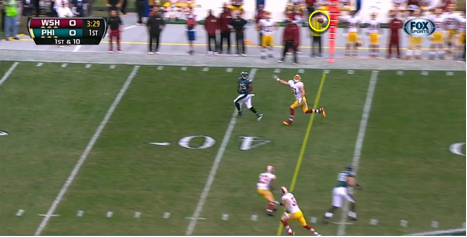 Given the Bears deficiencies against the run, the Eagles are certain to deploy a heavy dose of inside-zone, outside-zone, and read-option plays to test the communication and assignments of a defensive front that hasn't been sound with their run fits. Additionally, with weak-side linebacker Lance Briggs potentially returning, this will test his conditioning level. However, once the Bears start to crowd the box with eight as an attempt to buttress against the run, look for the Eagles to run their mesh concepts to free up their speed players in space.