(CBS) If the Bears find themselves still playing football next January, their conversion on a 4th-and-inches at their own 33-yard line against the Packers may have been the on-ramp in their road to the playoffs.

The decision go for it and trust your team's best unit to protect a downtrodden defense is a defining moment in head coach Marc Trestman's young NFL career. For years, the Bears counted on their defense to not only stop their opponent from scoring, but they also counted on them for points.

In less than one year, Trestman has shifted the paradigm.

When asked about his decision in his postgame press conference, Trestman said: "I can't say there was great analytical reasoning involved. It was a sense that we needed to stay on the field, and I felt that we could.''

Let's go to the film room and take a closer look.

The Bears come out in '22' personnel (2 running backs, 2 tight ends) in an I-formation with an eight-man line. Eben Britton and Martellus Bennett set the strength of the formation to the offense's left, and Brandon Marshall is lined up as a tight end on the right.

The Packers respond with an eight-man box in 5-3-3 personnel, filling the A and B gaps.

Knowing it was going to be tough sledding up the middle, the Bears run an outside stretch play to the strength of the formation.

Left guard Matt Slauson pins BJ Raji in the playside A-gap, left tackle Jermon Bushrod down blocks in the playside B-gap, Britton and Bennett combo block the 9-technique, Garza pulls to clear out the cornerback, and fullback Tony Fiametta is the lead blocker. 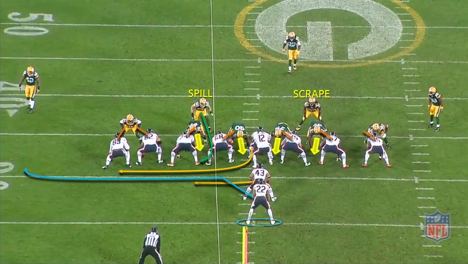 Inside linebacker AJ Hawk is the "spill" defender on this play, attacking the play inside-out. He knifes through the B-gap, trailing Garza's inside hip to Forte, but Fiametta keeps his eyes on the backside of the play. 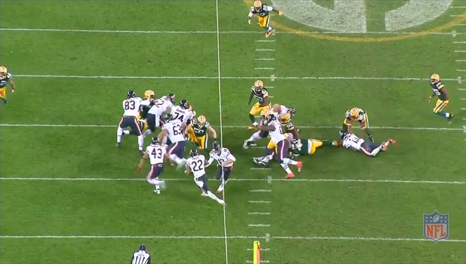 With Garza zeroed in on the corner for the kickout block, Hawk successfully makes his way to Forte in the backfield, preparing to drop him for a loss at the 29-yard line. 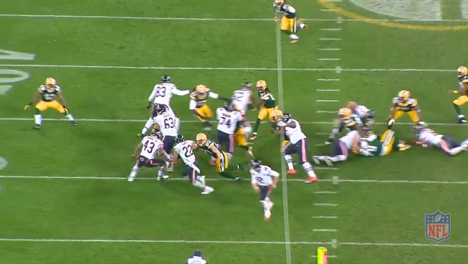 Fiametta picks up just enough of Hawk to free up Forte, but Britton and Bennett didn't finish their combo block on Nate Palmer. Britton releases to block down on inside linebacker Jamari Lattimore who is the scrape defender, but Bennett (#83) also releases to pick up free safety Jerron McMillan, leaving Palmer with a clean shot at Forte. 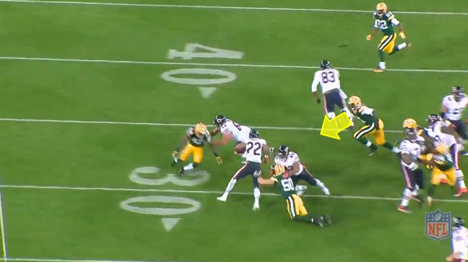 Garza is able to get just enough of Morgan Burnett, giving Forte a small crease to hop through and pick up the first down. 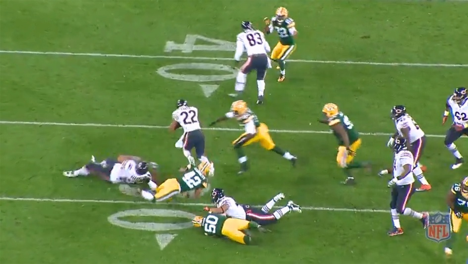 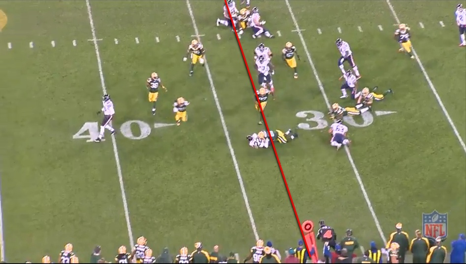 This was a very gutsy call by Trestman. Obviously, he looks like a genius since the Bears were able to pick up the first down, but this play was nearly stuffed in the backfield. Fiametta's block and Forte's balance moved the chains, proving once again that football truly is a game of inches.