The intricacy of modern passing attacks require precise route running, so quarterbacks can anticipate breaks. Split-second missteps can be the difference between an incompletion or a touchdown.

Three-quarters of the way through his fourth NFL season, Bryant continues to make flash plays and has emerged as a coverage-dictating wide receiver, but he is still learning the nuances of playing the position. The Cowboys coaching staff has wisely given Bryant a small package of routes to run to simplify his sight adjustments (coverage reads) and routes based on a cornerback's technique.

Let's go to the film room to look at some of the ways the Cowboys use their most dangerous offensive weapon.

The Kansas City Chiefs have one of the league's most talented secondaries. They matched up cornerback Brandon Flowers against Bryant in a lot of press-man (Flowers lined up directly across from Bryant in man coverage, challenging his release off the line) looks with a single-high safety over the top. 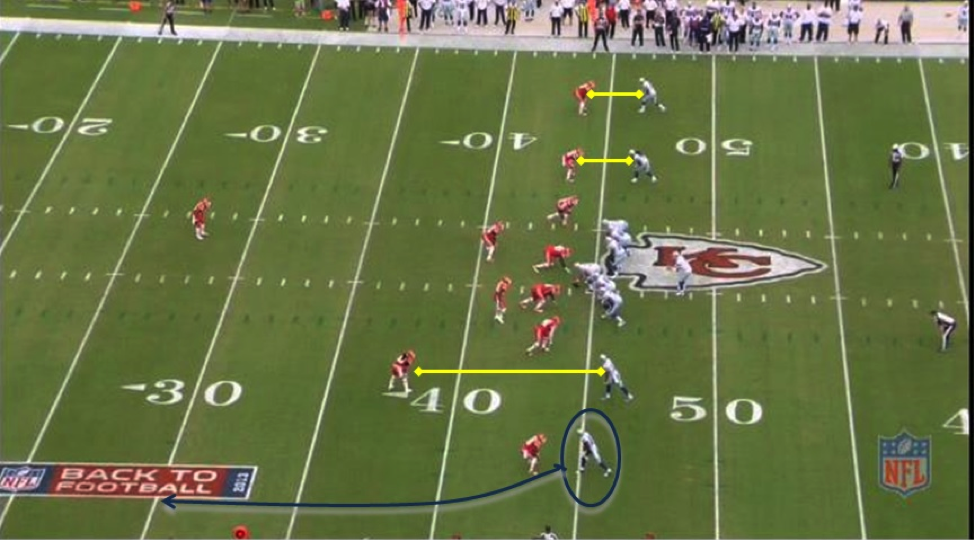 Early on, Flowers was playing Bryant in a "trail" man technique. Meaning, after his initial jam at the line of scrimmage, he played Bryant's inside hip, trailing him up the field.

Bryant's strength off the line allowed him to beat the jam, and his speed enabled him to get on top of or "stack" Flowers with a vertical or "9" route. The single-high safety is in the middle of the field with his eyes fixed on the quarterback, leaving Romo with a big passing window to drop the ball into. 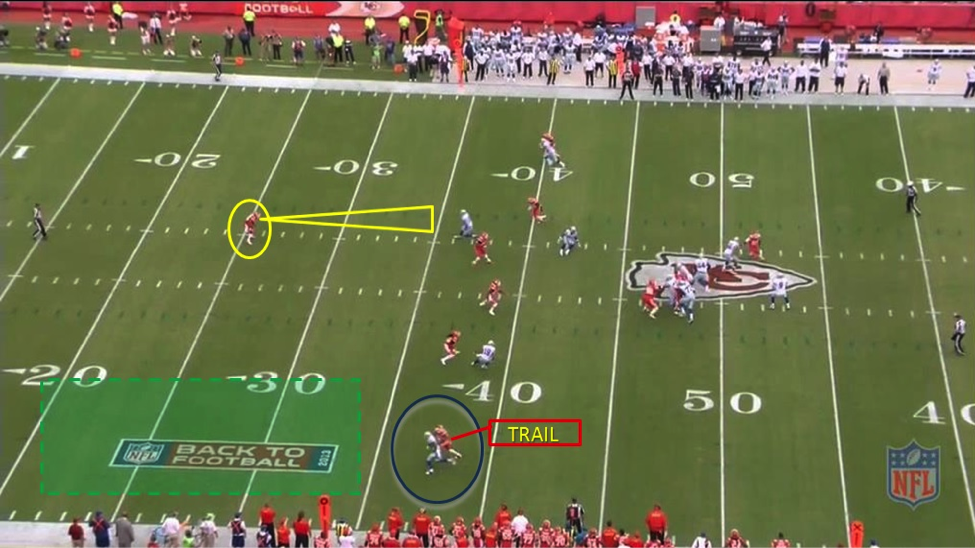 A better throw would've been a touchdown, instead Romo led Bryant too much, forcing him to lay out for an acrobatic reception. 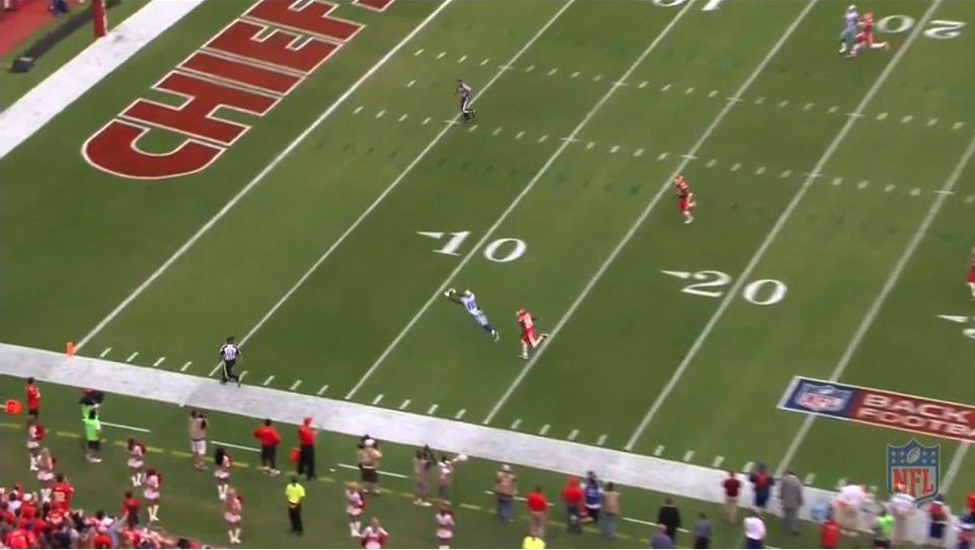 Later in the game, the Chiefs show the same press-man, single-high safety look against Bryant. 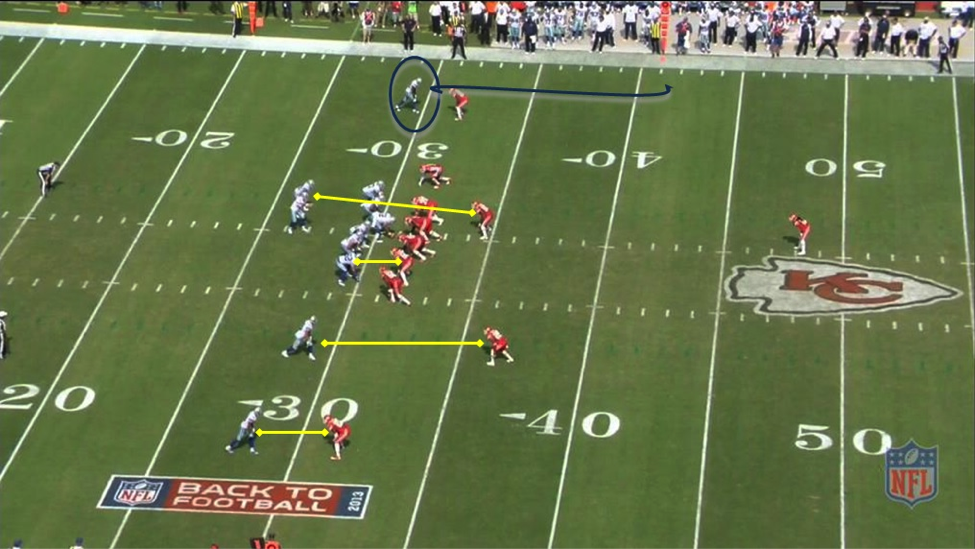 However, this time Flowers adjusted his technique to prevent the deep ball, playing Bryant's up-field shoulder. 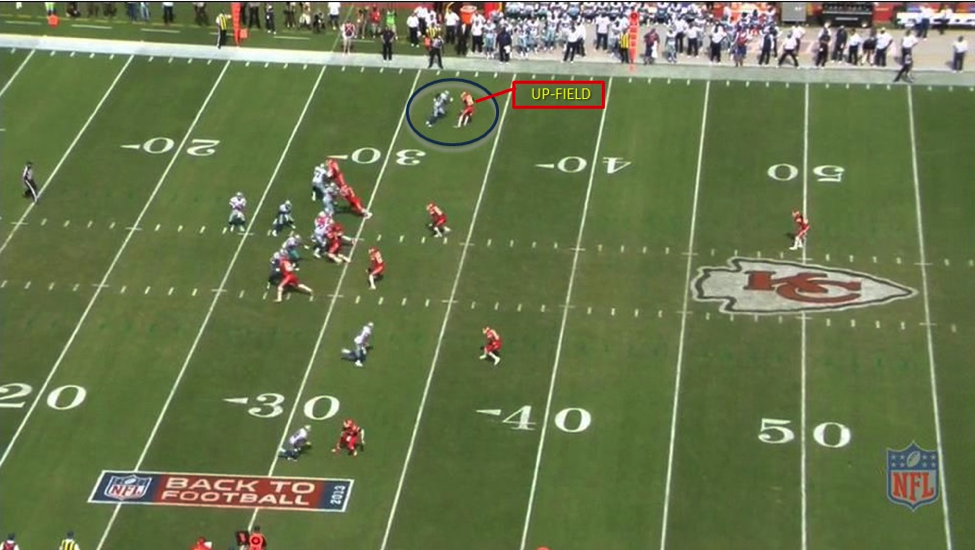 Seeing that Flowers is stacked over the top of him to defend against the 9-route, Bryant breaks his route off on a fade-stop/comeback route. Romo throws the ball to Bryant's back shoulder for the easy pitch-and-catch first down. 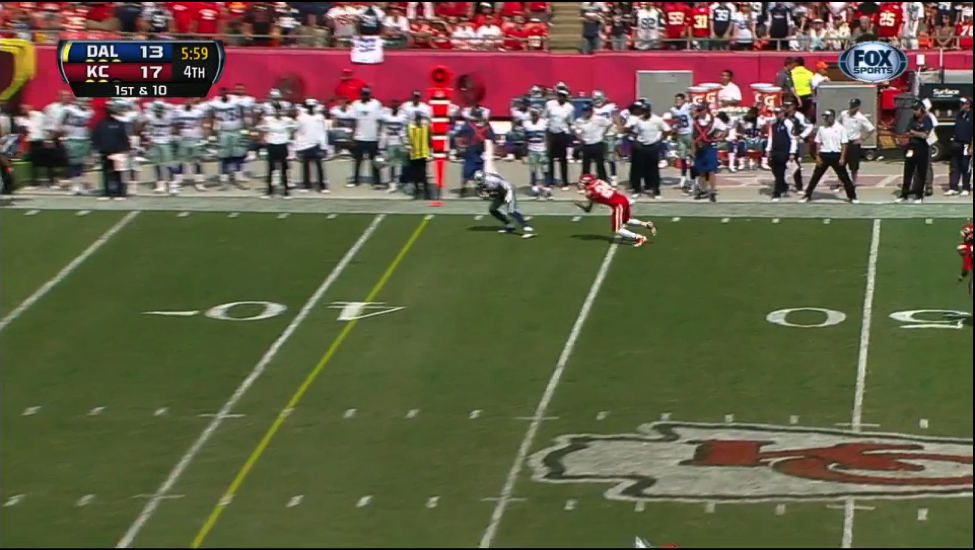 This is smart and simple design by the Cowboys. Since the Chiefs chose to play man coverage against Bryant, they gave him the freedom to adjust his routes based on the technique of the cornerback.

Other than vertical routes, Bryant has his most success on slants and deep-in or "dig" routes over the middle of the field, particularly against Cover-2 and 2-Man coverage. Bryant is a gifted open field runner, so the Cowboys scheme ways to get him the ball while moving with his shoulders square or at a 45-degree angle to the end zone.

Additionally, a new wrinkle the Cowboys have shown is lining Bryant and tight end Jason Witten up next to each other in 2x2 or 2x3 alignments, running "mesh" and "hi-lo" concepts with them. This assures single coverage for at least one of them, and by crossing them over each other, they can screen off defenders and/or create coverage conflict.

The Cowboys are a pass-heavy offense, with a 65-35 pass-to-run ratio. Look for the Bears to deploy a lot of Cover-2 on Monday night, and the Cowboys to respond with deep digs and slant routes between the numbers to challenge a Bears secondary that has struggled to tackle in the open field.