(CBS) Reggie Bush was a full participant in Wednesday's practice, so the Bears must game plan accordingly. The Lions have been searching for a complimentary receiver for Calvin Johnson and Bush – provided he can stay healthy – has the potential to fill that void out of the backfield and from the slot. Bush's presence has added balance and a new dimension to the Lions offense. He's making the most of his opportunities, averaging seven yards per touch and 20 yards per reception.

With Johnson requiring safety help over the top, space is created underneath for Bush to operate in, typically against linebackers. Offensive coordinator Scott Linehan has devised some creative ways to get the ball into Bush's hands in space.

Let's go to the film room and take a look at Bush's most explosive play of the season, a 77-yard touchdown reception on a middle screen against the Vikings.

With 5:58 remaining in the third quarter, the Lions have the ball 3rd-and-8 at their own 23-yard line, leading 20-17. The Lions come out in '11' personnel (1 Running Back, 1 Tight End) in a 3 x 1 alignment, and the Vikings respond with their nickel (5 defensive backs) package in a Cover-2 shell. The Vikings play 2-Man, two deep safeties with man coverage underneath. Knowing there's deep help over the top, underneath defenders are coached to trail their man and play with inside leverage to defend against inside-breaking routes. 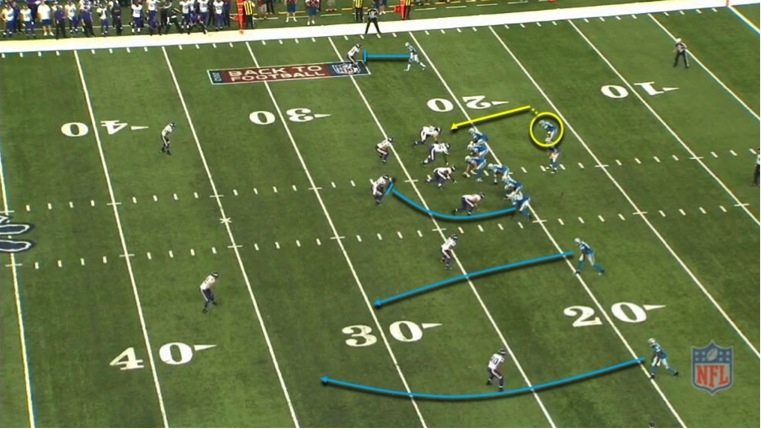 The setup on this play is subtle, yet brilliant. Bush takes a few steps to his right to get Chad Greenway in outside leverage, creating an angle for Bush to work inside behind three blockers. 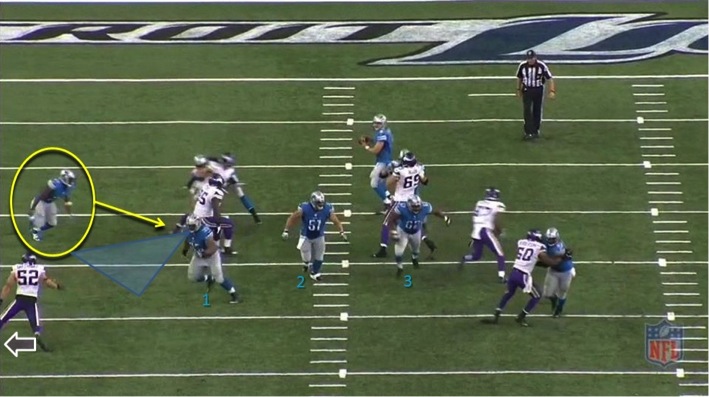 Greenway is already at a disadvantage trying to cover Bush, but his loose technique combined with Harrison Smith's (circled in purple) flat angle up the numbers creates a big seam up the middle of the Vikings defense.

With his blockers set up, it's then a just a matter of Bush being the fastest player on the field, as he takes it to the house for a 77-yard touchdown to put the Vikings away. 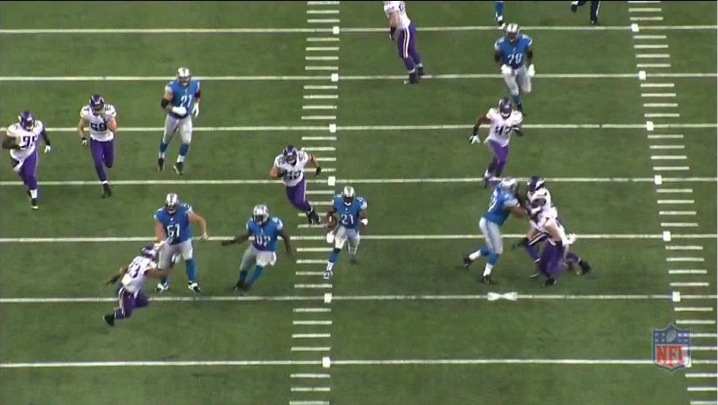 The Lions have also run this middle screen with Bush out of the slot, attacking the underneath voids in the defense. Bush missed the Lions Week 3 matchup against the Redskins with a knee injury, but even in his absence, Linehan ran this scheme with Joique Bell for positive yardage.

If Bush is able to stay healthy, the Lions offense could be potent. In addition to being deadly in the open field in the screen game, Bush is a crafty "option" route (letting the defender's leverage determine which way he breaks) runner as well.

The Bears front four is struggling to create pressure, which has forced defensive coordinator Mel Tucker to bring blitzers from the back seven. Against Bush and Johnson, the Bears may have to dial down the pressure and revert back to their tried-and-true Cover-2, playing assignment football with seven sets of eyes on the football. Otherwise, Sunday's game could turn into a track meet.