(CBS) When watching the Cleveland Browns play defense it's quite evident defensive coordinator Ray Horton would rather be the hammer than the nail.

This comes as no surprise when you consider Horton's past. He's a disciple of Dick LeBeau, one of the pioneers of the zone-blitz scheme. Horton absorbed LeBeau's scheme over a 12-year span both as a player and a coach. Half of Horton's 10-year NFL career was as a cornerback on a Bengals team coordinated by LeBeau, and seven out of his last 10 seasons as an NFL coach were spent as LeBeau's secondary coach.

Horton dictates an offense's tempo by deploying multiple fronts and hybrid coverage schemes behind them. Exotic schemes are only as effective as those executing them on the field. In Cleveland, Horton has the luxury of working with one of the league's true lockdown, cover corners Joe Haden and strong safety thumper TJ Ward.

The Browns frequently turn up the heat on opposing quarterbacks by creating conflict in opposing protection schemes with fire zone blitzes, overloads and blitzers sent in waves.

Let's go to the film room to look at a few of the Browns pressure packages.

The first example is an overload blitz the Browns deployed against the Ravens. The Ravens come out in '11' (one running back, one tight end) personnel, and the Browns respond with their 'nickel' (five defensive back) personnel in a 2-4-5 alignment.

An overload blitz is designed to create a free run to the quarterback by outnumbering the opponents' available blockers. The Browns send a five-man pressure with hybrid man-zone coverage behind. Defenders circled in black are manned up, those in orange squares are responsible for specific zones. 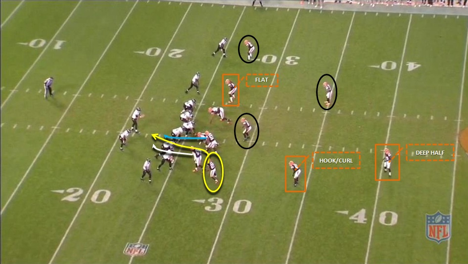 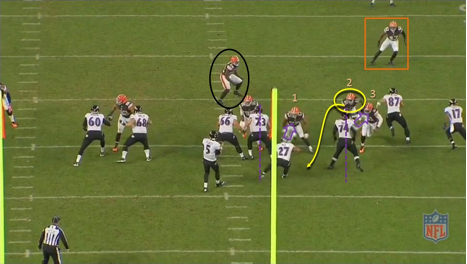 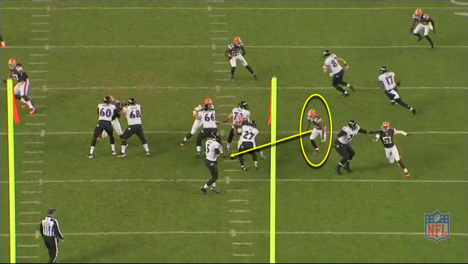 This blitz unfolded exactly as it was drawn up on the white board. By the time Yanda passed Bryant off to Gradkowski it was too late for him to help. Rice did his job by blocking inside out to pick up the most dangerous man (Robertson), but Owens was unaccounted for in the protection count.

The next example is an example of the Browns sending waves of blitzers from the second and third level, which requires precise timing.

The Ravens again come out in '11' personnel, and the Browns again respond with their nickel personnel in a 2-4-5 alignment. 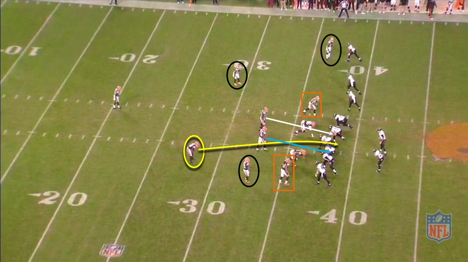 The Browns down lineman take outside contain releases to occupy the offensive tackles. The first wave of blitzers is the inside backers through the B-gaps to occupy the center, both guards, and running back Ray Rice. The second wave is TJ Ward, who "pitchforks" his path to find the open crease to the quarterback. 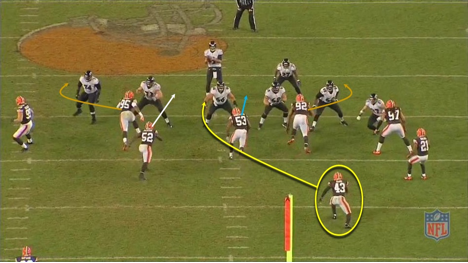 A two-wave blitz takes precise timing by Ward, but it also takes time for the coverage to hold up. By dropping the outside linebackers into the matchup zone underneath, Flacco's hot reads are taken away from him. With man coverage over the top and a single-high safety, Flacco can't force the ball down the field, leaving Ward with a clean path. 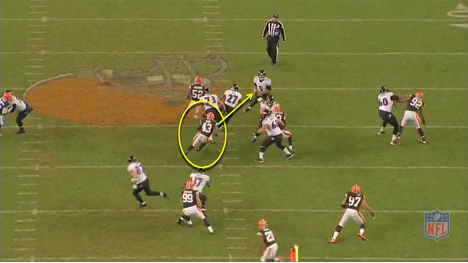 Historically, Bears center Roberto Garza has struggled when he faces 3-4 fronts. It has affected his shotgun snaps – concerned about getting his hands up too quick – and he often loses leverage battles on inside runs. Combine this with two rookies on the right side of the line, and you can safely assume Horton will throw a variety of blitzes to test the communication and continuity of the Bears offensive line.