(CBS) It's impossible for the Bears to undo their recent history. The back-to-back seasons in which the defense allowed the most and second-most single-season points in franchise history will forever live in infamy. Former Bears general manager Phil Emery's attempt to shift the paradigm and evolve into an offensive-oriented team was a failure.

New Bears general manager Ryan Pace, on the other hand, recognizes the team must get back to its roots.

"When you think about the Chicago Bears' identity over the years," Pace said, "it's tough, physical defense, and we're going to get back to that."

True to his words, Pace went out and hired a defensive-minded head coach in John Fox, who then went on to hire Vic Fangio to coordinate the defense.

Fangio's resume speaks for itself. He's regarded as one of the league's premier defensive coordinators and, judging by his recent history, is the ideal candidate to correct the course and align with Pace's vision for the franchise.

Over the past four seasons in San Francisco, Fangio's defenses ranked in the top five in yards allowed for four straight seasons and the top three in points allowed in three of the four seasons.

At its core, Fangio's scheme is a 3-4 – also known as a "30-front" – predicated on brutally strong down linemen who can jar and occupy their opponent off the snap to not only keep inside linebackers clean but create single-block opportunities for outside linebackers to create pressure off the edge.

Behind this physical and instinctive defensive front, Fangio combines man and zone concepts – often on the same play – to create pre-snap confusion with the quarterback and give him a distorted image of what defense will actually unfold after the snap.

It's not a foregone conclusion that the Bears will run a 3-4 under Fangio. Fox's roots trace back to a 4-3 scheme, but starting in 2011 in Denver he began to run more 3-4 looks and evolved into somewhat of a hybrid scheme, which dovetails well with Fangio's scheme that incorporates some 4-3 elements – primarily pre-snap alignments.

Recently, some Bears fans viewed a 3-4 scheme as a panacea. But that's far from reality.

The core of the Bears' previously dominant defense was built on a Tampa-2 foundation, which is diametrically opposed to a 3-4 in terms of the profile of athletes who are procured and deployed along the front. The Tampa-2 uses up-the-field one-gap shooters along the line and coverage droppers at the second level. A 3-4 uses two-gap space eaters up front and second-level run stuffers.

But given how bare the cupboard is on defense, there has never been a better time for the Bears to consider drastic change on defense from both a personnel and philosophical standpoint.

The advantages of a properly scouted, coached and executed 3-4 scheme can be vast.

By substituting a down lineman with a linebacker, defenses are able to raise the overall athleticism on the field. Finding traditional defensive ends to play in a 4-3 scheme (think Mario Williams) is both difficult and expensive, both in terms of draft position and eventual financial compensation.

At the collegiate ranks, there's a larger number of linebackers and undersized defensive ends who can be converted to outside backers in a 3-4 (think Aldon Smith). In turn, this increases the pool of available talent, and it then becomes a matter of scouting departments identifying the right prospects who can be turned over to the coaching staff to for player development purposes.

From a schematic standpoint, a 3-4 affords flexibility to defensive coordinators both from an alignment and pressure standpoint.

When preparing for a 4-3 scheme, it's nearly a foregone conclusion that all four down linemen will be a part of the rush. The challenge for the protection scheme then becomes deploying the proper rules on twists and stunts and identifying where second- and third-level pressure may come from. Within a 3-4, any of the four linebackers can easily be disguised and incorporated into the rush, which forces protection schemes to account for all – or none – of them on any given play.

Let's step into the film room and take a closer look at Fangio's scheme.

Here's an example from the Eagles game. The Eagles come out in "12" (one running back, two tight end) personnel in a unit gun formation with LeSean McCoy offset to the left of Nick Foles.

On base downs (think first and second down or against "21" or "12" offensive personnel), Fangio typically uses 3-4 personnel in a 4-0-4 front. What is the significance of 4-0-4, you ask? It's the technique of the defensive linemen. (Click here for a column I previously wrote about techniques, gaps and alignments. You might want to bookmark it.) 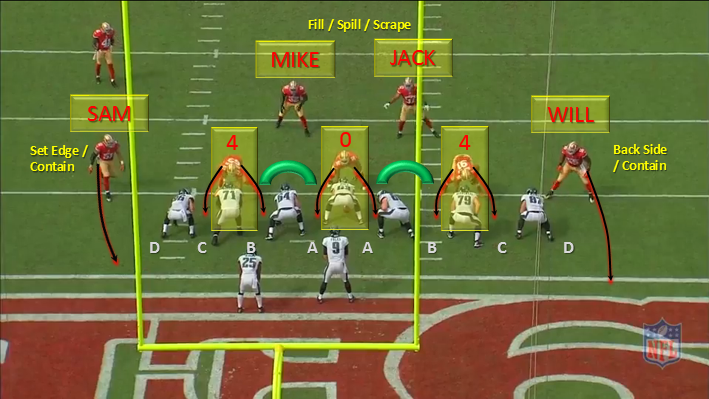 The three down linemen play two-gap responsibility, which means they're attacking the player they're lined up across from (opposed to one-gap, where defensive linemen attack the space in between offensive linemen), reading his leverage and occupying the immediate gaps to their left and right. The four-technique ends attack the offensive tackles, while the zero-technique attacks the center.

Like a 4-3, a 3-4 has a middle (Mike), weak-side (Will) and strong-side (Sam) linebacker, but it adds in a second inside linebacker known as a "Jack" backer. Typically the Jack backer is lined up to the open or weak side of the offensive formation and assumes more coverage responsibilities. The Jack backer is typically substituted for when the defense goes to nickel (five defensive backs).

The two inside linebackers line up over the uncovered offensive linemen – known as the "bubble" – in a 20-technique and read their post-snap keys. The first key is the running back, the second key is reading the helmet level of the offensive guard and the third is any offset alignment by a back. On run downs, they can fill the hole, spill the play from inside to out or scrape over the top of the pile to set an outside edge.

The outside linebackers play the most crucial role in Fangio's scheme, not only from an athletic standpoint but from a recognition standpoint as well. Because they're playing closer to the line of scrimmage, their reaction time must be nearly instantaneous. First, they must recognize the type of block they're getting, then engage the blocker while keeping eyes in the backfield. 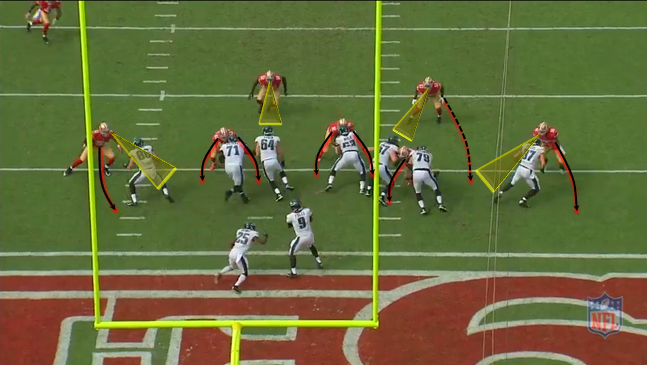 Against the pass, outside backers are used both in the rush package (typically the Will), as well as in coverage drops. The Will backer must engage his blocker – in many cases a tight end – read and disrupt his release.

If the tight end releases on a route and the Will backer is part of the rush, he must disrupt the release by getting his hands on his foe, then fixing his eyes on the setup of the tackle as he squeezes down the edge.

The Sam backer is typically a D-gap player in Fangio's scheme who plays with force to set the edge against the run to force the ball-carrier back inside.

Fangio does show some elements of a 4-3 scheme with pre-snap alignments. He's deployed over and under fronts, with the difference being the end man on the line of scrimmage is playing from a two-point stance.

Here's an example of a 3-4 under front from Fangio, with defensive end Justin Smith playing a 3/4i-technique to the open or weak side of the formation, and the Will backer playing in a nine-technique from a two-point stance. 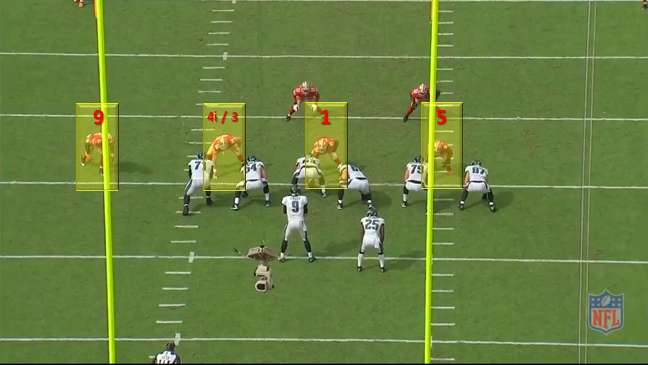 From this alignment, Fangio has given Smith – and other ends – both one- and two-gap responsibilities, but primarily his down linemen play with two-gap technique.

Behind these fronts, Fangio is fond of mixing his coverages, playing both man and zone principles with his underneath and deep defenders.

This example from the Cowboys game shows the 49ers in a single-high, six-underneath look, which typically signals zone to a quarterback. But in this case, Fangio is playing with man technique on the outside while the linebackers play zone in the middle as the single-high free safety lurks, reading the eyes and shoulders of the quarterback. 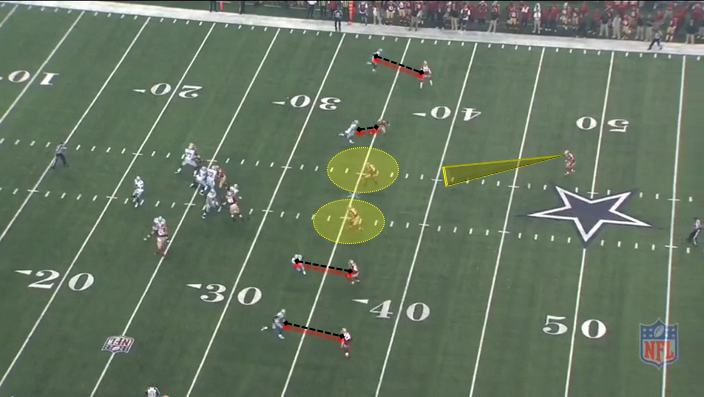 This coverage gives Tony Romo the illusion of zone, but it's actually man, causing him to pause with throws to the perimeter as defenders squeeze down on his receivers.

In terms of pressure, Fangio doesn't dial up many exotic blitzes. Instead, he relies on his down linemen to occupy blockers so his edge rushers can win single-block opportunities.

The Bears have some players along their defensive front who have experience playing in a 3-4 scheme -- Lamarr Houston, Jeremiah Ratliff, Cornelius Washington and Shea McClellin.

However, independent of scheme, the Bears need a significant infusion of new (and preferably young) talent on defense. In a way, that's good, as a switch to 3-4 would only change the profile of athlete Pace and his staff need to scout for.

Fangio's hire signals a new commitment from the organization to match the rhetoric of becoming a legitimate contender. With more human talent in place on the coaching staff, now it's time to get more where it really matters -- on the field.