In 2012, no team in the NFL got less productivity out of their tight ends than the Bears. Comparing "sino" (starter in name only) Kellen Davis to the rest of the league, reveals that not only did every team have at least one tight end with more receptions than Davis, but twelve teams had two. In a league that's experienced a tight end renaissance, that's a damning statistic.

Bennett has been a durable starter throughout his career, playing in 76 of 80 games, and was on the field for 92% of the Giants snaps last season. Bennett will be a three-down "Y" tight end in Marc Trestman's offense. By having a tight end that doesn't need to be subbed out, you give the defense less to key on, and can scheme advantageous matchups against linebackers over the middle of the field.

Here's an example from the Giants game last year against the Panthers. The Giants come out in regular personnel - 2RB / 2 WR / 1 TE – in an I-formation, and the Panthers counter with their base 4-3 personnel in a Cover-2 shell. Bennett (circled in yellow) is the "Y" receiver matched up against the strongside linebacker. 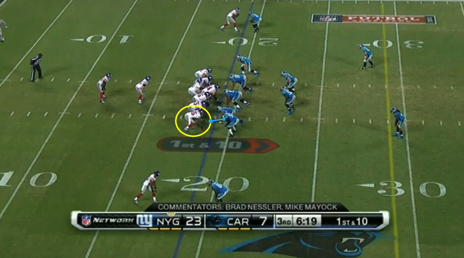 The Giants run play-action, keying the linebackers to fill their run gaps, and the safeties to momentarily come up in run support. Both wide receivers gain outside leverage, and once the safeties realize it's a pass, they're split outside towards the numbers, giving Bennett even more room to operate up the seam, resulting in an easy pitch-and-catch completion for 29 yards. 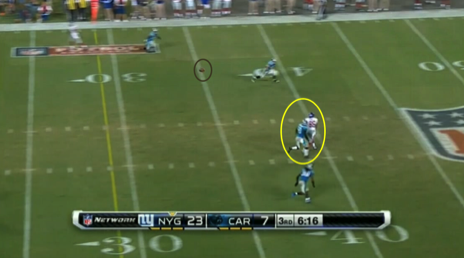 The Giants got the exact one-on-one matchup they were looking for, as Bennett is a mismatch against linebackers. This personnel grouping and play-action package will be featured by Trestman, making Bennett a natural fit for the Bears new offense.

Bennett also provides the Bears with another big-bodied target in/near the red zone. Here's an example from the Bucs game, where the Giants come out in 3WR/1RB/1TE personnel, in a double slot formation. Bennett is the inside receiver (circled in yellow), who releases underneath on a 9 (vertical) route. 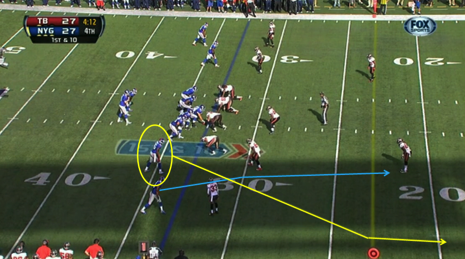 Bennett uses his size advantage to create leverage against the defender, catches the ball at its highest point, and makes his way into the end zone for a go-ahead touchdown. 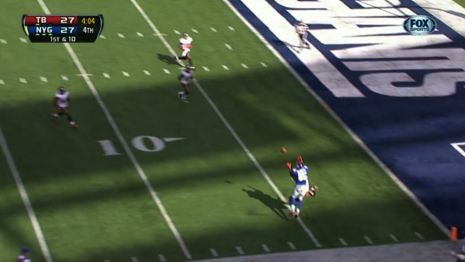 The Bears passing attack was one-dimensional last season, utterly reliant on Brandon Marshall's ability to work through double and triple coverage. Having a wide receiver who commands extra safety help over the top creates single coverage opportunities for other receivers, ideally tight ends who can work the middle of the field, the largest area of a defense to attack.

Make no mistake about it, Bennett isn't a game-changing receiving threat like Rob Gronkowski, or Jimmy Graham, but he's as complete of a tight end as the Bears have had in years. Bennett is a skilled athlete who runs precise routes, and is a willing and effective run blocker.

By signing Bennett, the Bears have given Jay Cutler another weapon to work with. Coupling Bennett with free agent left tackle Jermon Bushrod gives the Bears a left tackle that doesn't require help, and allows tight ends to be out in routes, instead of staying in to max protect. It seems like this Emery guy has a plan and knows what he's doing.

How does it feel to know there's a real general manager running the franchise, Bears fans?