(CBS) Blitzing is a double-edged sword for a defense.

The upside is clear. By defeating an opponent's protection scheme, a quarterback's decision-making process is sped up, which can lead to errant throws. The downside is equally clear. By blitzing, you're exposing the back end of your defense, and any lapse in fundamentals can lead to a big play.

Since 2012, the Falcons have struggled to put pressure on opposing quarterbacks, ranking 28th, 30th and now 29th in sacks this season. This time period coincides with the tenure of defensive coordinator Mike Nolan, who made his mark in the NFL by scheming pressure with hybrid fronts.

The Falcons are blitzing on 29 percent of opponent's passing plays, per Pro Football Focus, which is the league average. However, those numbers have been on the rise over the course of the season, but the increased volume hasn't produced the intended results. Opposing quarterbacks are averaging a passer rating of 95 and are gaining the second-most yards per pass attempt (8.2).

Let's go to the film room and take a closer look at how teams have attacked the Falcons' pressure packages.

The first example comes from the New Orleans game in Week 1. The Saints come out in 11 personnel out of the gun and motion running back Travaris Cadet to the slot into an empty set, 4x1 formation. The Falcons respond with nickel personnel in a 4-2-5 alignment.

The Falcons blitz strong safety William Moore and linebacker Joplo Bartu (red lines) to form a six-man pressure while playing man defense behind it. The Saints run a four verticals concept, with Cadet running a shallow crossing route underneath. 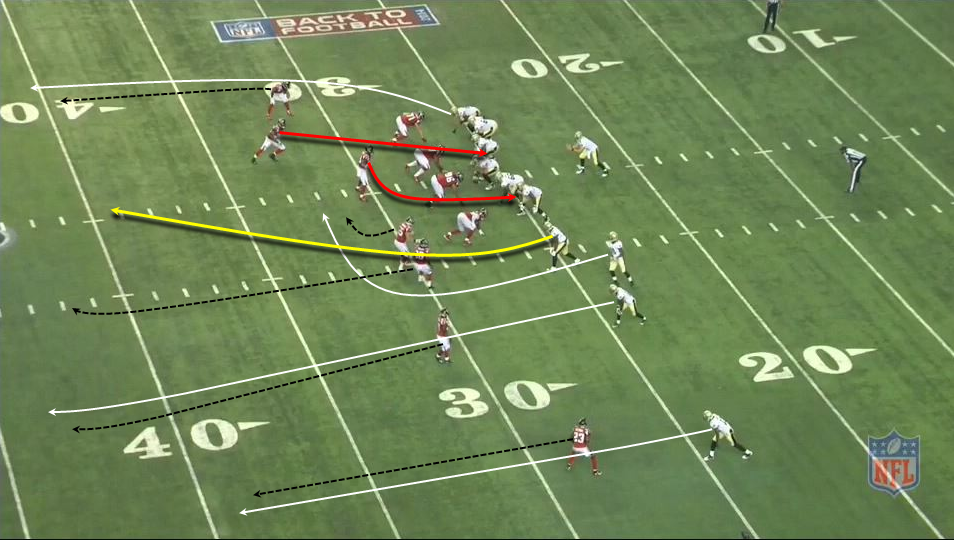 Rather than playing trail man on Marques Colston as he stems his route over the middle fo the field, safety Dwight Lowery (circled in black) drops up the seam in a zone technique, leaving the middle of the field wide open for Colston to navigate and creating a huge passing window for Drew Brees. 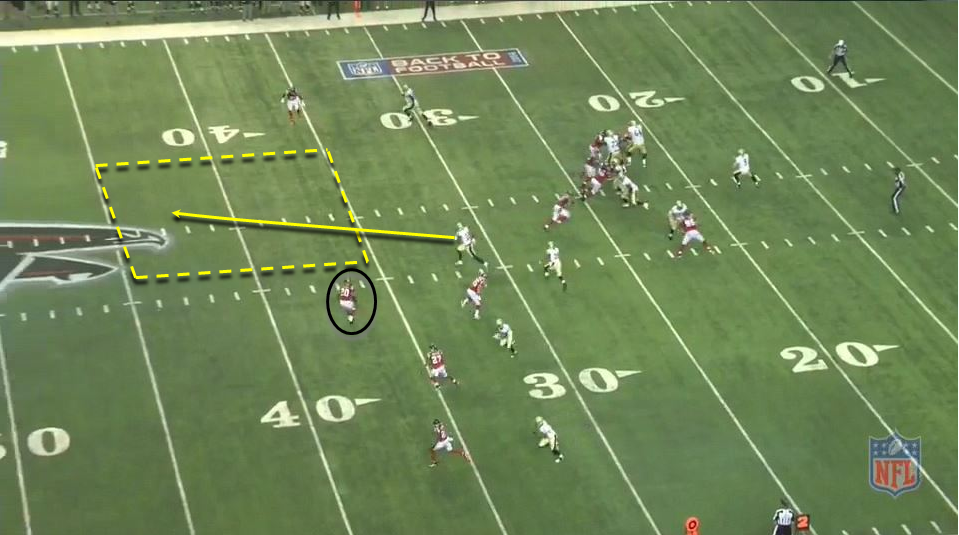 Brees drops it in the bucket, connecting with Colston on a 57-yard gain. 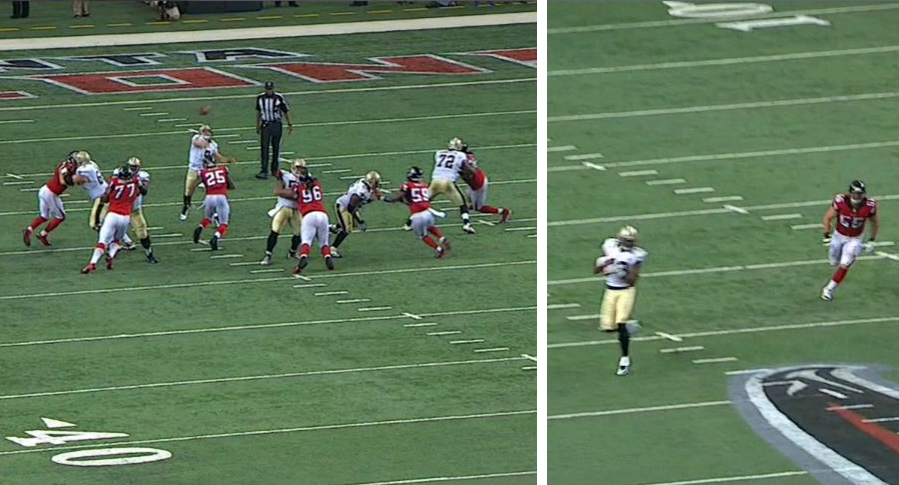 Not only did the blitz not get home quick enough, Lowery played the wrong technique behind the blitz, exposing the middle of the field and creating an easy pitch-and-catch play.

The next example comes from the Cincinnati game. The Bengals come out in 11 personnel in an orange formation in a 2x2 set out of the gun. The Falcons respond with nickel personnel in a 3-3-5 alignment and bring the house with a maximum blitz with Cover-0 (no safety help, one-on-one man coverage) over the top. 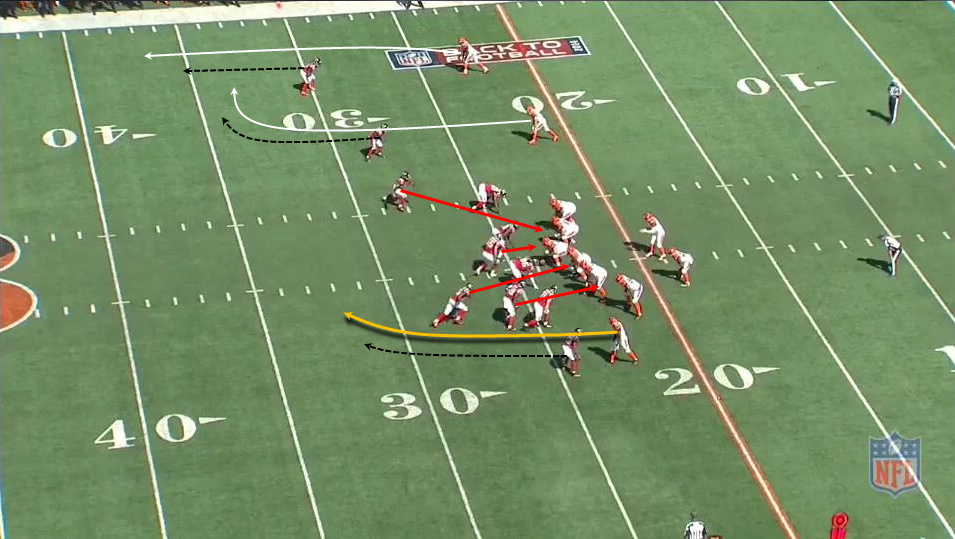 Right off the snap, cornerback Robert Alford is beat, as he's lined up in outside leverage. With no help over top, Alford needs to play with inside leverage and jam wide receiver Mohamed Sanu with his inside (left) hand and force him to the outside. The middle of the field is always the biggest area of the field for an offense to attack, particularly when a defense chooses to bring an all-out blitz.

Sanu wins his release and runs a skinny post (or "bang-8") route over the middle.

The Falcons overload the Bengals' protection, sending eight against a seven-man protection, and the rush is on track to get home. 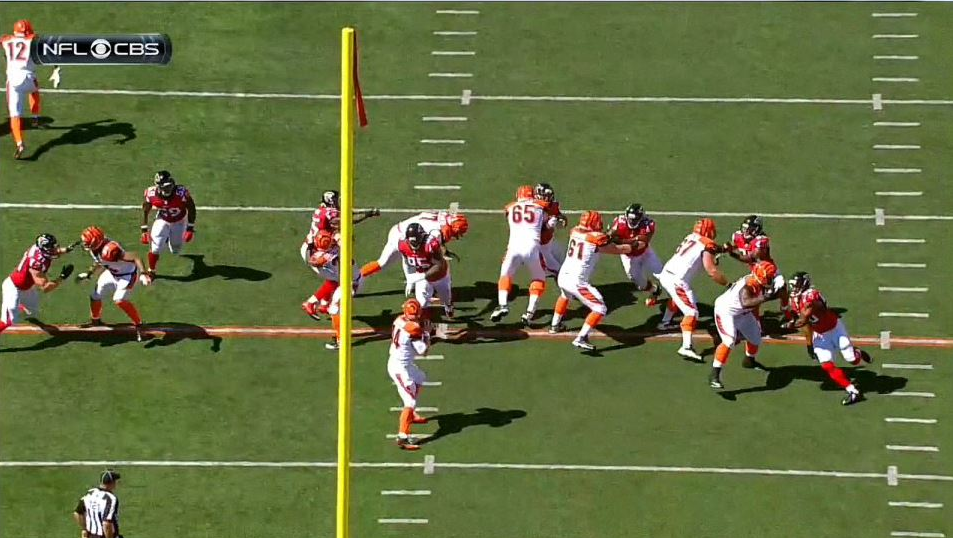 However, Alford loses at the line of scrimmage, Sanu gains inside leverage and quarterback Andy Dalton gets rid of the ball just in time to connect on a 76-yard touchdown pass. 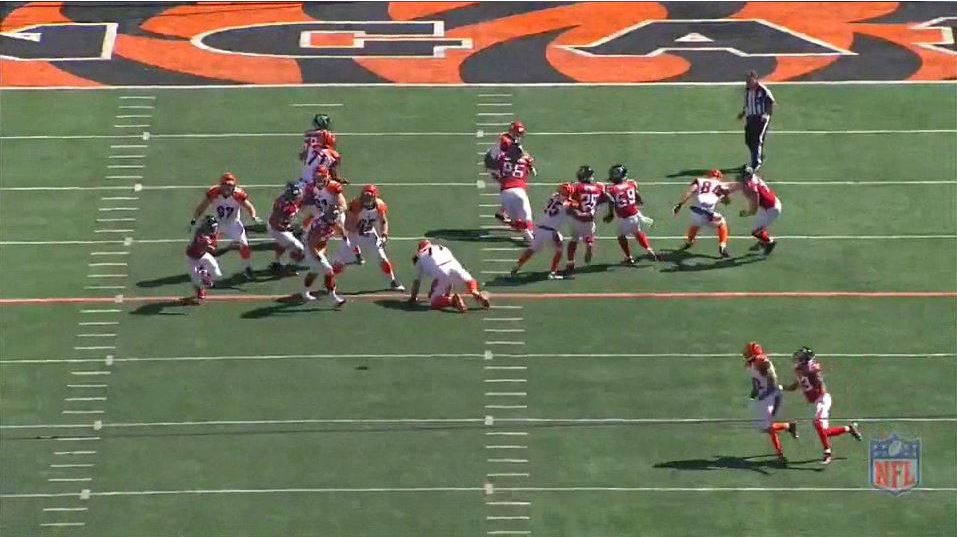 Against a pass-first team like the Bears (63 percent, fourth highest in the league), who have been sacked at a higher rate over their past three games, the Falcons may be tempted to pressure quarterback Jay Cutler to try and force some errant passes. However, the Falcons must be judicious about when they send pressure against a team with perimeter athletes like the Bears have, as they've been burned by for explosive passes on plays on blitzes due to poor technique in the secondary.