(CBS) Two weeks from today, Bears general manager Phil Emery will make the most important decision of his 2014 offseason.

That's not to say that personnel decisions he's made in free agency can't and won't factor significantly into the success or failure of the product this fall. Quite the contrary, actually.

However, Emery was hired to close the talent gap and win championships -- emphasis on plural -- which, as recent history shows, is done via the draft.

Entering his third season on the job, Emery's greatest impact on the roster has largely come via trade and free agency. The vast majority of 2014 free-agent dollars have been spent on rebuilding the defense, and the allocation of draft picks -- specifically in the early rounds -- will be no different.

Given that reality, there's legitimate reason for Bears fans to head into the draft with a "prove it" attitude toward Emery.

His first two forays in the draft have yielded but two impact players, both on offense: wide receiver Alshon Jeffery and offensive guard Kyle Long. None of the seven selections (of 12 total) spent on defense have established themselves as legitimate NFL starters, so the pressure is high on Emery to correct the course.

The current collective bargaining agreement has made the draft a cheap labor market. Hit on a first-round draft pick, and you can protect his services at a cap-friendly rate for as many as five seasons.

When you take inventory of the moves the Bears have made to improve their roster, there are still needs at every level of the defense, but safety, defensive tackle, cornerback and (to a lesser extent) linebacker stand out. If you were to further distill that list, the top two needs are safety and defensive tackle, so how will the Bears "break a tie" in the first round?

In reality, they shouldn't have to.

An optimistic way of looking at the myriad needs on defense is that the Bears really can't go wrong in the first round. Simply draft the highest remaining defensive player on your board, then attack your remaining needs thereafter.

A realistic-yet-subjective way of looking at it shows that safety is the most pressing need on this roster. There are only two draft prospects worthy of the 14th overall selection: Calvin Pryor (Louisville) and Ha Ha Clinton-Dix (Alabama).

(For a deeper dive into the 2014 safety class, click here for audio to a podcast I did with Adam Hoge).

In 2013, the starting combination of Major Wright and Chris Conte were liabilities virtually every week. Wright has since signed with Tampa Bay, and Conte had shoulder surgery that may jeopardize his availability for the start of training camp.

In free agency, the Bears have added four safeties -- Ryan Mundy, Craig Steltz, M.D. Jennings and Danny McCray -- but nobody from that group will prevent the Bears from upping the talent level early in the draft.

Fortunately for the Bears, recent history indicates that the odds of finding an All-Pro safety in the top 14 are better than any other position on defense.

Over the past five drafts, 35 defensive players have been taken in the top 14, three of whom were safeties, two of whom have established themselves as perennial fixtures on the Associated Press All-Pro team -- Eric Berry (Chiefs) and Earl Thomas (Seahawks). 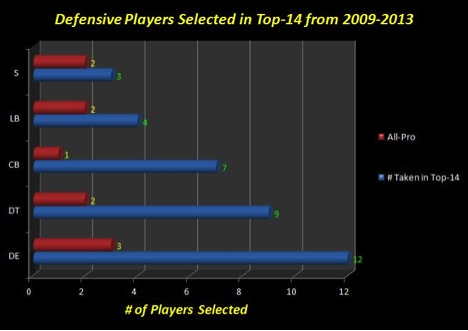 To put some speed bumps on the slippery slope, this doesn't mean drafting a safety in the first round assures of him becoming an All-Pro. It just illustrates that other positions on defense –- as well as quarterbacks and offensive tackles -- have historically been at more of a premium, which pushes the top safety prospects to the middle of the first round.

Now, that trend of safeties going later in the first round may be coming to and end.

Look at the free agency dollars that are being spent at the position. In a previous column, I noted that of all positions, safety saw this biggest jump in franchise tag value, increasing by 22 percent from 2013 to 2014. Front offices certainly follow the money.

Couple this new trend with being able to lock up cheap labor in the first round for as many as five seasons, and teams may want to start getting ahead of the rapidly ramping cost curve at safety.

Casting the money aspect aside for a moment, what's happening on the field has enhanced the need and skill set required to successfully play safety in the NFL.

As offenses continue to become more spread-oriented, both safeties have to have coverage skills. Combine this air-oriented approach with the way hits over the middle of the field are being legislated, and the days of having a pure enforcer, "in the box" strong safety are numbered.

I've been pondering if teams will start to deploy more big nickel and big dime sub packages, which means having three safeties on the field.

Traditionally, as offenses spread teams out, defenses respond with nickel and dime personnel and bring in cornerbacks. Smart quarterbacks take advantage of these personnel groupings by running the ball to the perimeter to force cornerbacks to play run support, a task they typically tend to avoid. Perhaps using safeties instead of corners will give defenses a solution to the in-game chess match?

Add it all up and it's clear that the Bears do in fact have a primary need heading into the draft. The question now is: will drafting 14th overall be early enough to secure the services of a top-flight safety?