August is here! Let's see what it's brought us.

What is this? Never heard of it. Tell me about it, sounds weird. 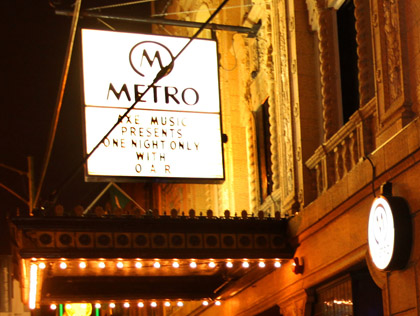 If you don't know the Metro, we're not sure what to tell you. It's played host to some of the best bands in the country both before and after their big breaks, and it serves the delightful function of introducing Wrigleyville to all the people who would never set foot on that stretch of Clark Street otherwise. We know this has been sold out for months, but we figure you're a resourceful lot, and seeing Shirley and her boys blow out the candles for Metro's big B-day is something you can connive, wheedle, or finagle your way into.

I'm sorry, did you have something better to do than go to a carnival, eat Kielbasa, compete in a Pierogi-eating contest and then dance to The World's Honkiest Polka Band? You didn't, did you? That's what I thought.

The indie darlings are preparing their swan song, at least in the current formation. Local music-writin' maven and band member Miles Raymer will be heading to New York, and so the boys will play one last show at the Bottle before they go gently into that good night. Opening guests include Outer Minds (fresh from their Pitchfork Music Festival performance) and a band called Football.

Over fifty theatre troupes and performers will participate in the Mary-Arrchie Theatre company's "Woodstock of Theater", so aptly named as a tribute to the then 20th anniversary of Woodstock. Theatre, burlesque, improv, you name it - they'll be there. The call is made for any and all to participate, so why not go ahead and be a star?

We're the luckiest country in the world, because we can buzz our downtown area with fighter jets for two days (and the week of practice beforehand) and laugh it all off as entertainment. USA! USA!

Union Park plays host to several dozen musicians, several thousand fans, and at least 58 hula hoops in the final weekend of August. A mix of electronica, jam bands, and several kitchen sinks finds the lineup offering something for not quite everyone... but certainly for about six very different music fans. Pretty Lights and Girl Talk will knife fight Umphrey's McGee and STS9 for the battle of laptops versus basslines. Big Boi and Mr. M-F'N eXquire will be top-notch options for those who like actual rappers. YACHT and Dan Deacon apparently never left after Pitchfork ended. And Rebirth Brass Band and King Khan and the Shrines are legally required to be loved by everyone, so you could do worse things to wrap up the month.

Dan Morgridge will miss these events, as he spends every August at several all-you-can-eat venues to prepare for his winter hibernation.