CHICAGO (CBS) -- The Union of Operating Engineers wants drivers to know what state inspectors said about the dangerous condition of the Des Plaines River bridge on I-80.

Earlier this month CBS 2 reported that inspectors found the bridge's span in Joliet to be in such critical condition that it "may require closure."

"We've let this go too long and now we're paying the price," said James Sweeney, president and business manager of the Operating Engineers Local 150. "But the price should not be lives."

The group took out two billboards that can be spotted by drivers as they approach from either direction.

The billboards read, "Bridge Ahead in Critical Condition" and "Cross Bridge at Your Own Risk." The intention is to highlight the fact that it has one of the lowest sufficiency ratings in the state. 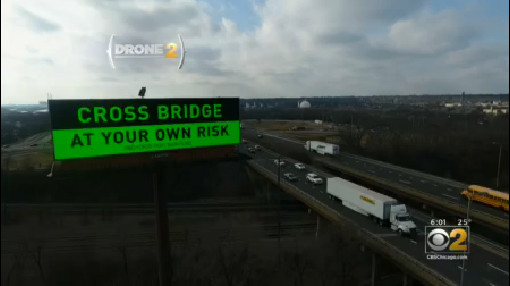 "The reason we're making this and screaming as loudly as they are is because it is that dangerous," Sweeney said.

IDOT told CBS 2 they are working on some short term structural maintenance, and they have plans to rebuild this bridge eventually. But funding for the long term is an issue.

Craighead explained that despite inflation and greater fuel efficiency, the gas tax that's used to fund these types of projects in Illinois hasn't been increased in nearly 30 years.

"If we were to double our gas, tax it would generate a little over $1.2 billion dollars per year," Craighead said.

This is what Indiana lawmakers did to cover their severe infrastructure issues two years ago, along with bumping up registration fees.

"There are projects everywhere in Indiana that have been able to move forward because of this additional funding," Craighead said.

"Public awareness, we hope, will awaken the legislators to do the right thing," Sweeney said.

While more taxes might be hard to swallow, Craighead and Sweeney argue that drivers are already paying more because of the poor conditions of some of these roads, waiting longer in congestion and paying more for vehicle maintenance.