CHICAGO (CBS)-- "Comment below and tag three friends" is your chance to win free items from your favorite brands on Instagram. It's also becoming a quick and easy way for scammers to target Instagram users' information.

In the hopes of connecting with followers, Corey Paige Designs, a New York-based designer who sells products in three Chicago-area stores, posted an Instagram giveaway offering a Valentine's Day-themed gift. One winner would be selected from the comment section.

However, many hopeful followers woke up to a direct message from an account that looked similar to @coreypaige_designs. The fake account told "winners" they would receive their promised gift by signing up for a streaming service and sending in a screenshot of the verification page within a time limit.

"As soon as I was made aware of this, I did everything I could to report the account and contact Instagram," Corey Paige told CBS 2. "I hope this can serve as a warning to those beyond just the Corey Paige Designs community, so users are aware of these types of accounts, and only provide information to someone known to them."

Corey Paige said this scam is frustrating because Instagram has been a trusted platform for growing her business during the pandemic, even expanding business to many Illinois customers.

"It's very frustrating to have fake or spam Instagram accounts pretending to be me and contacting my followers," Corey Paige told CBS 2. "Not only does this impact my brand, but I would never want to be the cause of a follower providing private information to someone."

She is not alone. A Chicago resident sent in a screenshot of a similar scam she received on Instagram after commenting on a giveaway, hoping to win a free blow dryer brush. 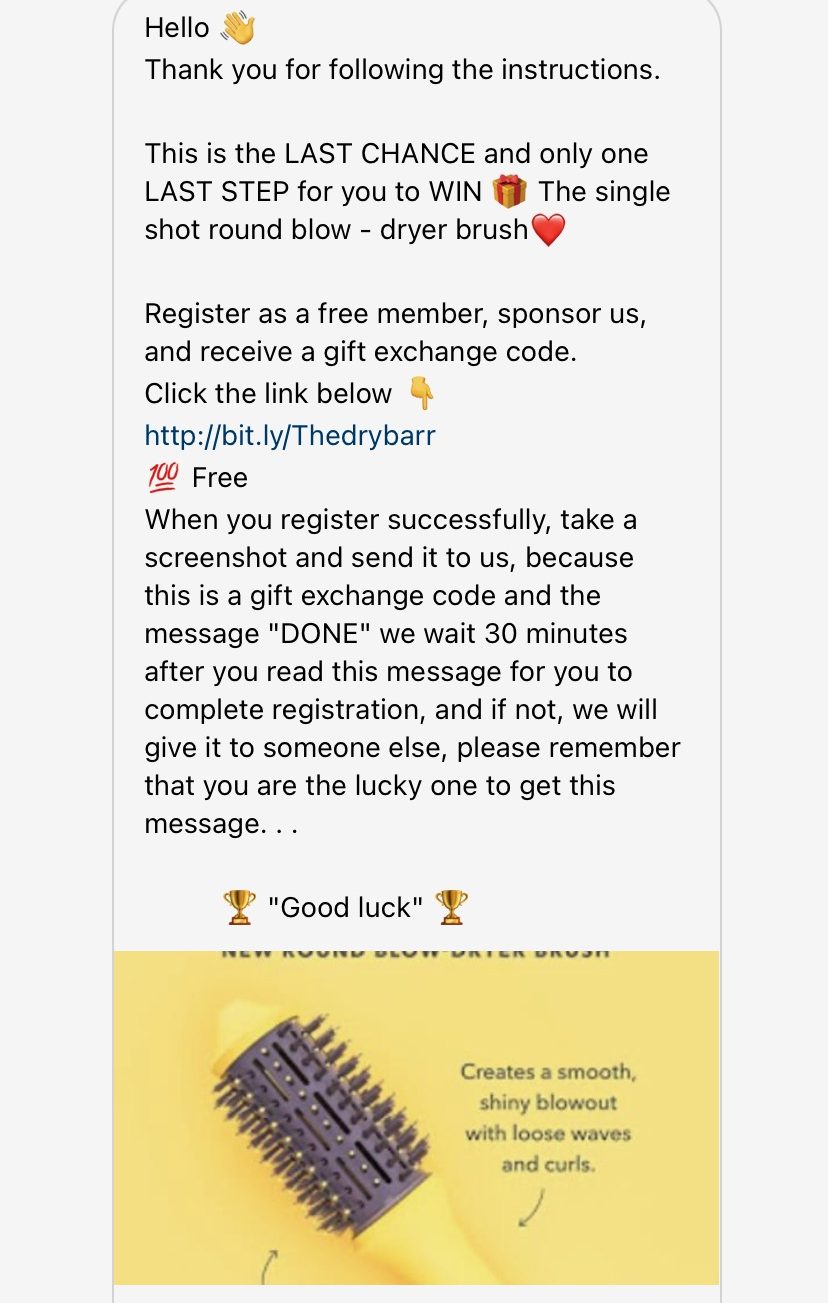 From the screenshot, it is clear the same scamming strategy was used. Luckily, the link was not opened and the fake hair product account was reported.

Corey Paige confirmed the fake account has been deleted. She said hundreds of her followers reported the account, and action was only taken after she went through a Facebook business chat representative.

A Facebook Company spokesperson released the following statement to CBS 2:

"Fake engagement and spammy behavior are against our rules and we've made massive investments to find and remove those responsible so Instagram can continue to be a place for genuine interactions. When detected, we take immediate action on the account or network responsible because people and businesses alike do not want to invest their time or money if they are not reaching real people."

According to the Better Business Bureau, there has been an increase in social media scams and most victims are between the ages of 18 and 24. The 25 to 34 age group is the second most victimized.

In December, the BBB released information on how to spot an Instagram giveaway scam. Scammers are looking to accumulate likes on a post or page, to then "link to malware" in messages. This includes fake products being sold by scam accounts as well.

The BBB said an account selling products with little to no content is "a big red flag." Checking for verification, or a blue checkmark, is one way to ensure an account is real.

According to the BBB's Top Scams of 2020, online purchase scams were the most common scam of the year. This included fake websites leading to false purchases.

You can report scam incidents through the BBB Scamtracker

First, the fake account had a slightly different handle name from Corey Paige's original account. Scammers added an "s" to the name, a slight change meant to trick users. Upon further investigation, the account profile had no posts, even though the same logo was used for the profile picture. (See photo below).

Before moving forward, it is important to check out the Instagram profile for other discrepancies. The real @coreypaige_designs has over 2,000 posts, including the original "giveaway" post. The fake account, as the BBB predicted, had no posts.

Next, a "free giveaway" from a brand should not require a credit card. If a credit card is requested, it is important to follow up with the original business.

Once you determine an account is fake, or posing a threat, the final step is to block and report the user. According to Instagram, "when you block someone, they won't be able to see your profile."