CHICAGO (CBS) -- A severe thunderstorm warning has been issued for parts of Lake and McHenry counties in Illinois until 10:30 p.m.

This could include hail and winds up to 60 mph.

A tornado warning has been issued for Cook, Lake and McHenry counties until 7:45 p.m. Wednesday.

At 6:53 p.m. a severe thunderstorm capable of producing a tornado was located over Wauconda, moving east at 30 mph.

Flying debris will be dangerous to those caught without shelter.

Mobile homes will be damaged or destroyed.

Damage to roofs, windows, and vehicles will occur. Tree damage is likely.

TAKE COVER NOW! Move to a basement or an interior room on the lowest floor of a sturdy building. Avoid windows. If you are outdoors, in a mobile home, or in a vehicle, move to the closest substantial shelter and protect yourself from flying debris and tornado indicated hail.

According to CBS 2 meteorologist Mary Kay Kleist, there is a chance for storms Wednesday evening. Isolated strong to severe storms are possible, mostly north of I-80. 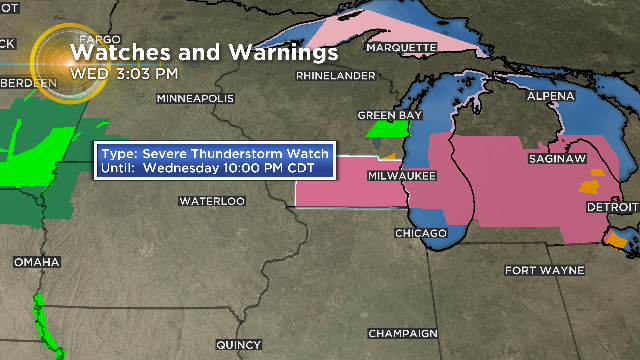 There is a severe thunderstorm watch in place for the Chicago area until 10 p.m. Wednesday.

Temperatures will be in the upper 80s, bringing high humidity. In some areas, CBS 2 meteorologist Megan Glaros said it could feel like 90 degrees.

Storms are expected overnight and into Thursday. 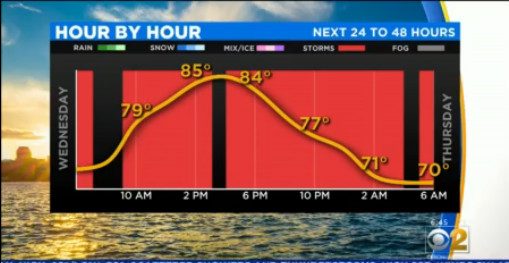 After a muggy week, sunny skies are predicted into the weekend with temperatures in the low 80s. 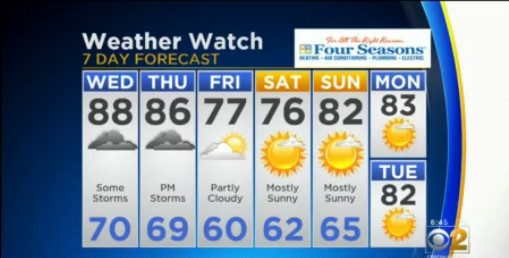