CHICAGO (CBS) --  A winter storm is bringing a mix of heavy rain, flooding, sleet, freezing rain and accumulating snow through late Saturday night. Gusty north winds will also lead to lakeshore flooding and waves of 12 to 18 feet, the highest Chicago has seen in six years.

According to CBS 2 meteorologists Robb Ellis and Mary Kay Kleist, it is a complex, multi-faceted storm. Areas up north will get more snow, while areas to the south of the city will get a lot more rain. 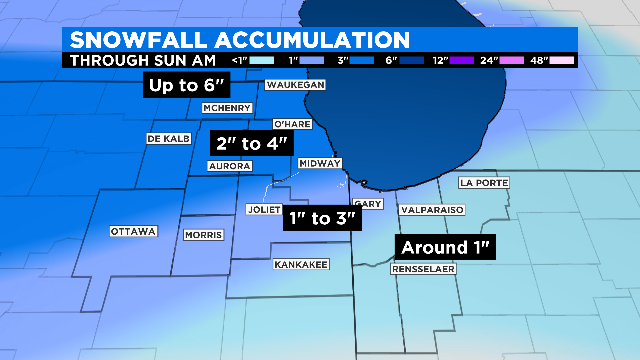 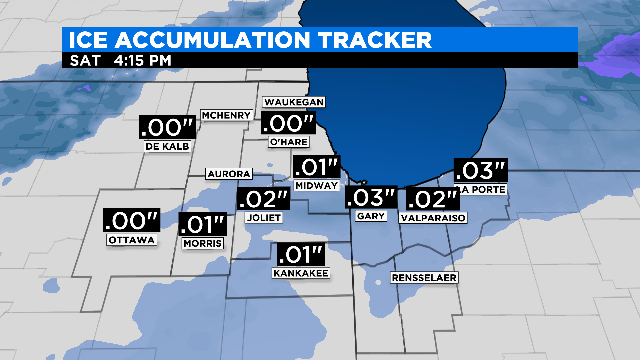 ICING: Some freezing rain and sleet is likely to accumulate on Friday  night and Saturday afternoon. Especially our western viewing area. Couple this with gusty winds over 40 mph, and isolate power outages could be possible. 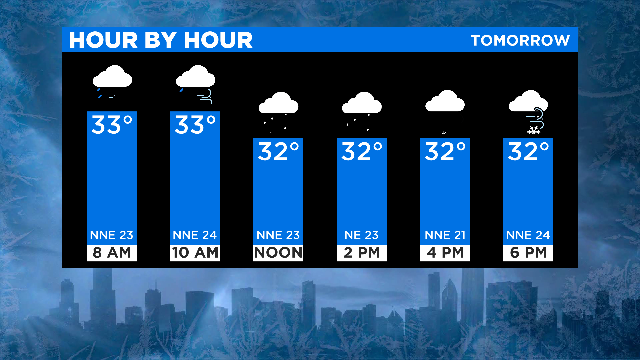 SNOW:  Accumulating snow of two to four inches is expected Saturday afternoon/evening for most of the city. Much lower south of the city. High amounts approaching six to seven inches along the Wisconsin border.

FLOODING: Flash flooding or areal flooding are possible during the heaviest rain Friday night into the early hours of Saturday. 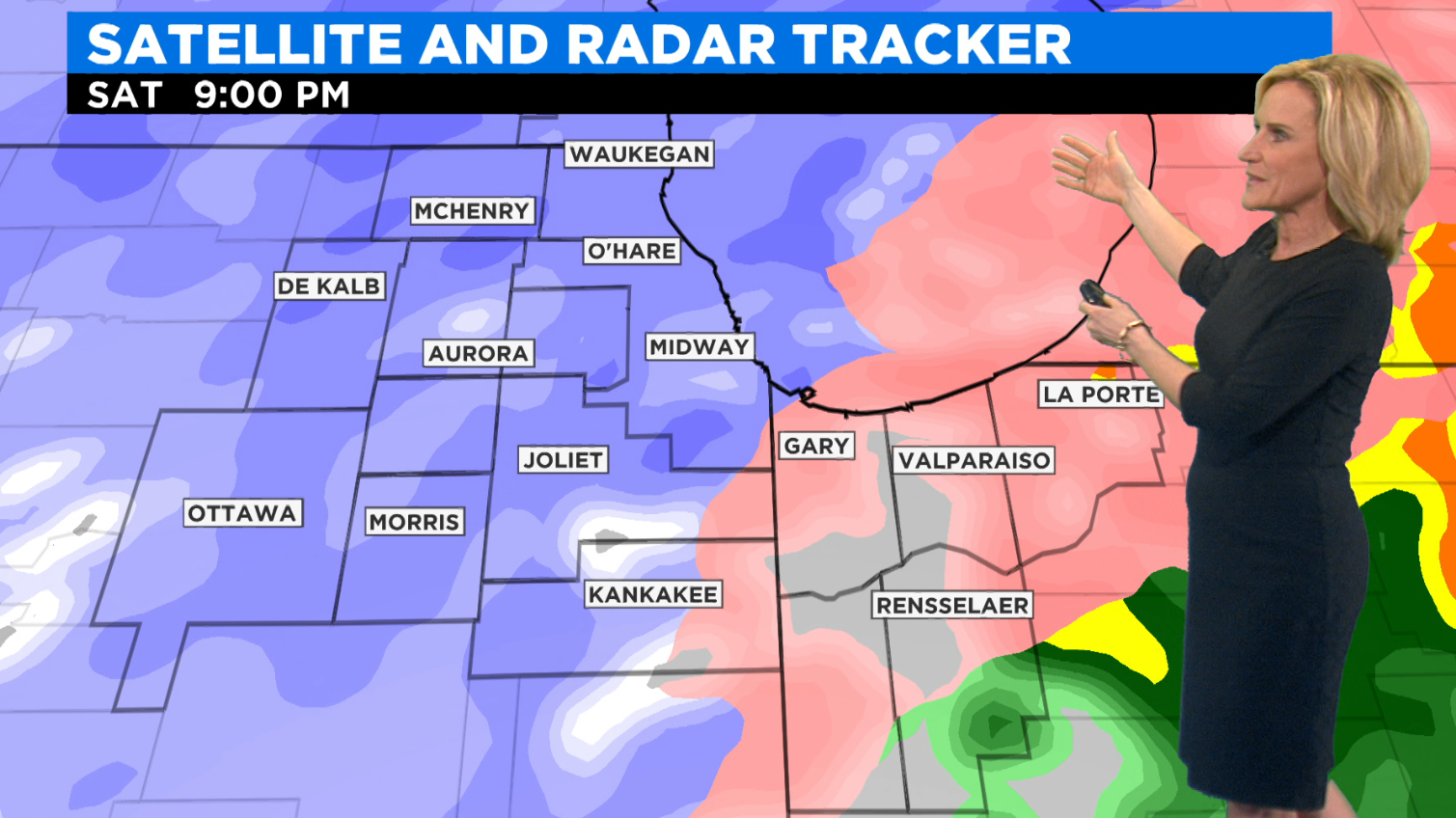 A WINTER STORM WARNING is in place for: McHenry, DeKalb Counties from 3:00 a.m. Saturday until 3:00 a.m. Sunday.

A WINTER WEATHER ADVISORY is in place for Lake (IL), Cook, DuPage, Kane, Kendall and La Salle until 3:00 a.m. Sunday.

A FLOOD WATCH is in place for Cook, DuPage, Kendall, Grundy, Will, Kankakeem Lake (IN,) Porter, Newton and Jasper until 6:00 p.m. Saturday.

A LAKESHORE FLOOD WARNING is in place for the lakeshores of Cook, Lake, Lake and (IN) until 6:00 a.m. Sunday.

Heavy rain is likely for most of the area, with the highest rainfall totals being in our southern viewing area and northwest Indiana. Temperatures will continue dropping but will remain above freezing for most spots. 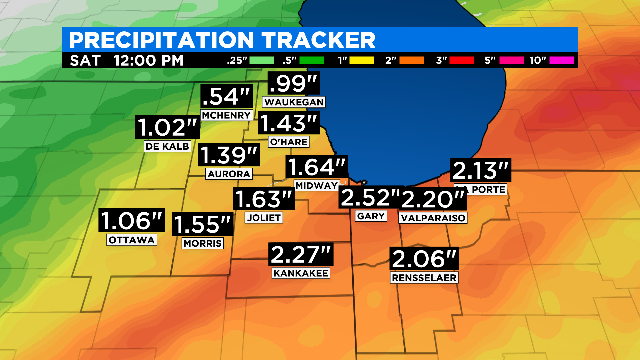 Some wintry mix of sleet and freezing rain could be possible by morning for Waukegan to Elgin. Winds will begin to pick up and gust to 40+ mph overnight. Waves will begin building on Lake Michigan.

We may see a brief lull in rain and wintry mix Saturday morning (after 6:00 a.m. through the afternoon). That isn't to say that rain/snow showers won't still be possible, but this will be a break from the heaviest parts of the storm.

A wintry mix of freezing rain and sleet will be possible during this time. Temperatures will be approaching freezing.

Winds will continue out of the north, gusting to 40 mph. Waves on Lake Michigan will be 12-18 feet through the day, potentially some waves as high as 23 ft! The highest waves are likely to be the northern lakeshore (Lake County IL, northern Cook Co).

A heavier batch of precipitation returns, but this time will be mostly snow of changing to snow.

Accumulation is expected to begin (from NW to SE). Some areas may still be dealing with sleet, freezing rain or just plain rain at this time (or a mix of all), depending on the locations.

Winds will still be gusting to 40+ mph and may lead to isolated power outages in locations that have accumulating freezing rain (far west viewing area).

Waves on the lake will continue to be very high. Lakeshore flooding is expected. Portions of Lakeshore Drive may be in jeopardy, especially north of Oak Street.

Accumulation of snow is likely to be ending or tapering off after midnight. Temperatures will continue to drop into the 20s. Waves on the lake should begin to subside as winds diminish.

EXTENDED FORECAST (AFTER THE STORM)

After a few morning flurries on Sunday, things seem to calm down. However, a much more progressive pattern emerges (Meaning a wintry system every few days, of various impacts).

The long range forecast brings no fewer than four of these garden variety wintry systems through the next two weeks.