BOSTON (CBS/AP) — An estimated crowd of nearly 175,000 people converged on Boston Common to march in protest of Republican President Donald Trump and in solidarity with society's most vulnerable people.

Saturday's event was part of a nationwide series of post-inauguration marches and rallies. 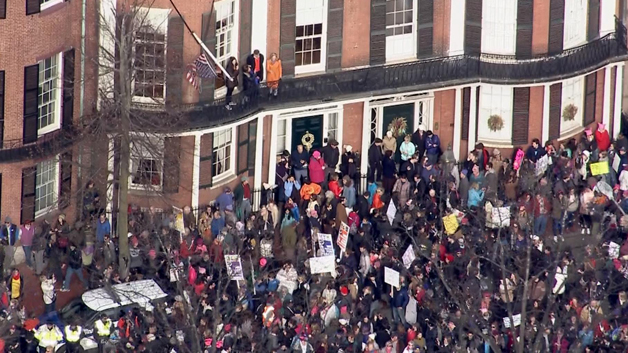 Among the crowd were scores of women wearing pink, cat-eared, knit hats and others holding signs including one that said, "Love Not Hate Makes America Great."

Boston Mayor Marty Walsh's office told WBZ-TV the crowd was likely between 135,000-150,000 in the afternoon. Later on Saturday, the Mayor's office said numbers were likely closer to 175,000 and organizers of the march agreed. Organizers initially had been expecting 80,000 people.

"Today, we were so proud to stand in solidarity with 175,000 people in Boston. United by more than 600 sister marches happening throughout the world, we sent a clear message to elected leaders that we are a country that stands for equality, dignity and justice," organizers said in a statement. "We thank the City of Boston, all public safety officials, and our thousands of marchers for a peaceful, positive event."

"Donald Trump's campaign was about attacks on women, attacks on African-Americans, attacks on Latinos, attacks on religious groups, attacks on immigrants," the Massachusetts Democrat told the crowd. "We come here to stand shoulder-to-shoulder to make clear we are here, we will not be silent, we will not play dead, we will fight for what we believe in."

Attorney General Maura Healey was also among those on hand.

The crowd demanded women's rights, LGBT rights, immigrant rights, religious rights, rights for people with disabilities, affordable and accessible healthcare and much more all be kept in tact during the Trump administration.

Sunny Patel showed up to the march because he opposes the administration's promise to repeal the Affordable Care Act.

"For us as doctors we have a moral responsibility to advocate for our patients," he said. "With the repeal of the ACA, that would be disastrous."

A mile-long procession that returns to the downtown park followed the speeches. The march wrapped up by Saturday evening,  but Sarah McCarthy, executive director of the Massachusetts Women's Political Caucus said the work has just started.

"Monday we have to go to work, we have to roll up our sleeves, and we have to get more women elected to office," she said.

Boston Police Commissioner William Evans praised the crowd for their behavior during the event.

"I'd like to thank all those protesting today in Boston for their peaceful, respectful and responsible behavior," Evans said.

MBTA stations throughout the region saw massive crowds heading into Boston for the march. The MBTA added extra service at some stations to accommodate the crowds.

Beginning at 3 p.m., the MBTA operated non-stop Green Line D branch buses from Copley to Riverside due to crowd sizes.

Boston Police set up large trucks to block off intersections in the area as a menthod of "effectively protecting demonstrators from possible vehicular threats."

Author Jodi Picoult said "We have the backs of those who are less fortunate — who may be struggling for health care, for environmental rights, for racial equality, for a fair wage, for justice" and added "We are in this together."