BOSTON (CBS) - Well here we are, getting comfy in our seats and preparing for the opening act of the winter season.

The questions about what we can expect usually start coming in during August for the heat-haters, and certainly by October for the masses. And here in November, we give it our annual best effort.

I feel that seasonal outlooks should come with the same amount of disclaimers as when you rent a car. Are they great? No. Is it important to push the science forward into longer range prediction? Absolutely. Are we getting better at reading the tea leaves? Yes. And have we done well for the past 4 years that we've issued them at WBZ-TV? Actually, yeah!

Three out of the past four years we have predicted above average snowfall and that is precisely what happened! (All those outlooks still exist online and you can check me with a quick Google search) And now that I have massively jinxed us with a catastrophic bust, onward to the geeky stuff.

Another tool in our belt is 'analog forecasting,' which is basically looking at our current set of circumstances and finding similar scenarios from the past. Using these, we can see how the story tends to play out in the months ahead. The longer we keep good records of our earth's atmospheric doings, the bigger this data base of analogs will become. Good news for future meteorologists!

More recently, a lot of attention on the polar vortex has become mainstream. There are two versions of this...the stratospheric polar vortex (wayyyy up above our heads) and the tropospheric version, which we've commonly called the polar jet stream for years. When the polar vortex is strong, the coldest air tends to be more stable and corralled around the arctic and high latitudes. When it is in a weakened state, it can take trips farther south and bring frequent deeper cold across the mid-latitudes.

So that's a very cliff's notes version of a few factors we look at. Without further ado, let's get into what they're pointing towards this year.

We are now in a La Nina regime, meaning waters are cool across the equatorial Pacific. The outlook for this winter is for a 'weak' La Nina, though I would give an outside chance of a 'moderate' event. When it comes to winter, weak La Ninas and El Ninos are the absolute hardest to forecast. They're highly variable and run all over the map in terms of outcomes here in New England. Josh Timlin made this nice graph (below) about snowfall distribution in Boston. You can see there are clear signals for the stronger ENSO events, but high variability during the weak ones. So having a weak La Nina doesn't necessarily help us a ton. It does at least favor cold air and snow across Canada and the northern tier states, with mild and dry conditions across the southern states. But we need to look at many more variables in tandem with La Nina.

It's interesting to note that we also had a La Nina last year, but the atmosphere didn't really match it. A raging Pacific jet stream kept the mild air pumping into North America, producing one of the warmest winters on record for parts of the country. We're not expecting a repeat performance this year with a more typical La Nina setup already settling in, and also because this La Nina is based farther east close to the coast of South America.

We will be finishing out the fall season in the Top 10 warmest all-time in the Boston area (as I write this we're still #1, but expected to slip down the rankings with more cool air to finish the month). What tends to follow those warmest of autumn seasons? Not much snow.

I made a composite of all the years with Top 10 warm falls, and then their corresponding height pattern for the winter. The southeast ridge is quite strong for those winters, which can nudge mild air into New England. You also get a sense of a very stormy pattern across the Midwest and Great Lakes with this kind of setup...which is typically a wet zone during La Nina. So the shoe fits, so to speak. 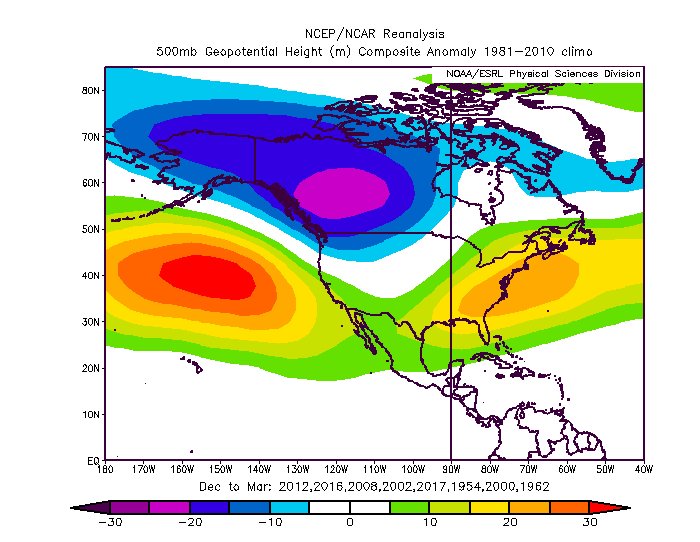 But November! A Cold Flip. What Does That Mean?

A warm fall season is one thing, but November tends to be more of a harbinger of the winter season. And naturally, this one has been cold! We'll finish colder than average, and likely by a pretty respectable amount. This tends to steer us away from the paltry winter that most warm autumns are followed by, but it's still no slam dunk. If you look back through 1950, there have been 18 Novembers that finished at least 1F colder than average. Of those 18, half had snowfall at least 5" above average in the Boston area. Four had nearly exactly average snowfall, and 5 had below average snow. More or less a coin flip with a slight favoring of snowier than average.

While researching, I found it pretty interesting that almost none of these winters were La Nina winters! A whopping 16 out of the 18 were El Nino winters or ENSO neutral. The only ones in the whole collection that featured La Nina were 1955-56 and 1995-96 (and that was a doozy).

A check on the PV right now shows it is fine and dandy...healthy and spinning up to kick off the winter season. There are no indications of it being disturbed or weakened heading into December. That being said, it's very early in the season and there's really not a great way of knowing when a sudden-stratospheric warming event, which weakens the polar vortex, may occur down the road. This is kind of a wildcard for the winter. If it stays strong, it can couple up with the tropospheric reflection of the polar vortex and generally keep the coldest air locked up north without big sustained plunges down into the mid-latitudes. Think a more zonal flow instead of huge ridges and troughs with unusually cold and warm pockets developing. Definitely something to keep tabs on. I am leaning toward this polar jet dominated flow that will lead to a little less variability/big extremes. 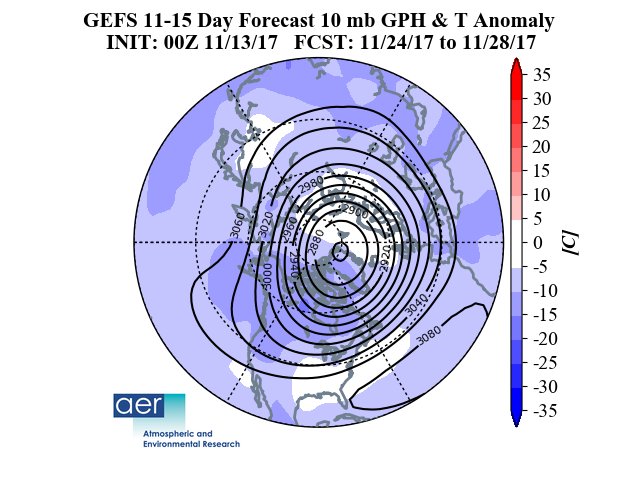 Other odds and ends

Just to add yet another cycle to the list, how about the MJO? That would be the Madden-Julian Oscillation, which is an intraseasonal measure of tropical variability. A pulse, if you will, of enhanced and suppressed tropical activity that travels eastward and then eventually returns to 'home.' The region of enhanced activity determines what phase the MJO is in. When we were torching in September and October, it was in large part due to a flare-up of the MJO.

To kick off winter, the MJO is not expected to be very active. Much like the polar vortex, this is a variable that is extremely difficult, if not impossible, to predict 2-3 months in the future. If it pulses up in phases 4-5-6-7 during the winter, it can deliver a blast of winter warmth to the eastern U.S. Phases 8-1-2 bring on the cold. The MJO is a great way to screw up a winter outlook, because if it decides to go big all bets are off. Forecasting is fun like that. 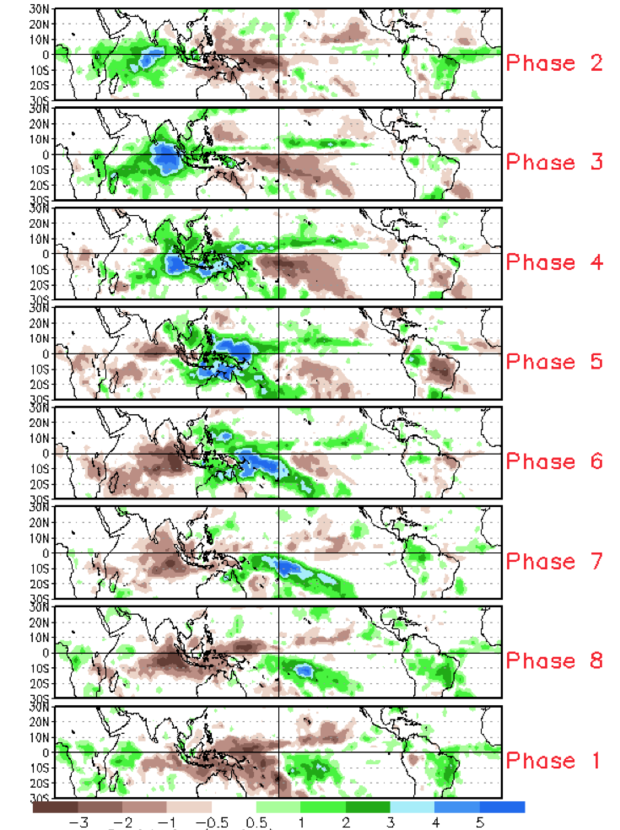 Okay, So What's The Call?

If you're still awake and reading this, congrats! You are an info-seeking geek and I love it.

Let's get to the outcome when considering all these factors. At the end of October, I was really leaning toward a 'meh' winter. Now that we've had a solid flip to a colder pattern in November and we've got a good snowpack building across Canada, I'm going to be a wuss and hedge the bet up a little. If I had to peg a number in Boston, I would go with 40" this winter (+/- 5"). Around 75" in the snow belt zones of central and northern Mass, 15-30" Cape Cod and the South Coast, and a big year across northern New England.

My biggest concern? The possibility that we don't get the ball rolling early enough. We know we've got some early cold air to work with, but will any of it be 'productive' with a storm track that looks somewhat lackluster for the time being. For sure, we can turn it around fast during the middle and end of December. But if we go through December and the snow isn't falling, then I feel like we could really bust with a weak winter. As long as we start bringing on the snowflakes as expected, we should be able to do fine before a mid to late season thaw.