BOSTON (CBS) -- There was a time when just about everyone questioned Danny Ainge's sanity for drafting Terry Rozier.

Ainge may still be a little cuckoo, but over the last few months, we've been forced to eat our words and apologize to the King of Chipotle for that harsh criticism back on June 25, 2015.

When the Celtics drafted Rozier with the 16th overall pick, it was universally bashed by basketball writers and Celtics fans. They had just drafted Marcus Smart with the sixth overall selection a year prior, so was there really a need for another defensive-minded guard that couldn't shoot? Ainge even tried to trade up in order to select Duke forward Justise Winslow, who was taken 10th overall by the Miami Heat, offering to send Michael Jordan a gift basket filled with half a dozen draft picks to get a deal done. MJ wanted no part of it and drafted Frank Kaminsky, so the Celtics remained at No. 16 and "settled" for Rozier.

It was a questionable pick at the time, and pundits and fans let the Celtics know. But now, in Rozier's third NBA season, he's showing everyone what Danny saw in him. Rozier has become an integral part of the Celtics' bench, averaging a career-high 11.3 points off 41 percent shooting. He's shined in his opportunity as a starter while Boston deals with a bevy of injuries, going for 19.2 points, 6.6 rebounds and 5.2 assists in his nine games in the starting five. With Kyrie Irving out the last two weeks, Rozier has filled in admirably by stuffing the stat sheet with 18.6 points, six rebounds and 4.2 assists over the last five games. The Celtics are 4-1 in those contests.

The 24-year-old, now known as "Scary Terry" by Celtics fans (and probably those forced to guard him around the league), is only getting better too, which is indeed a scary concept. He put in a career-high 33 points in Boston's 104-93 win over the Sacramento Kings on Sunday night, draining eight threes and going 12-for-16 from the field.

All of that draft night criticism seems so long ago, but Rozier remembers. Over the weekend, shortly after he helped the Celtics pull off an improbable win over the Blazers in Portland with nine fourth-quarter points, Rozier retweeted CBS Sports' draft grade. They were not fans of the selection, and gave Boston (and in turn, Rozier) a big fat F. 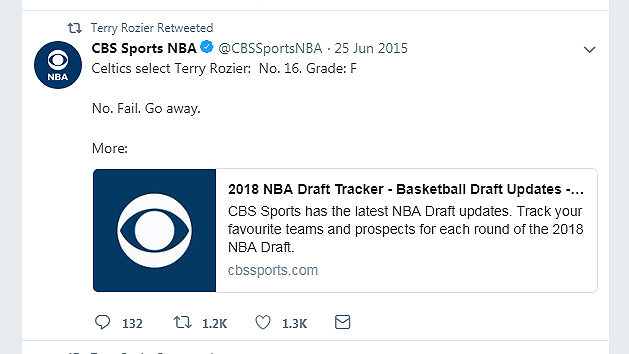 And yes, I was also guilty of criticizing the pick, joining the masses who questioned the selection. I calling it a "puzzling pick" and a disappointing reach, which in my defense, was rather tame for what was being tossed around that evening.

There were plenty more. USA Today said the Celtics could have gotten Rozier at No. 28, which may have been true. Bleacher Report questioned why Ainge didn't go with Bobby Portis or Sam Dekker. Fansided didn't see him as a great fit for Boston, and UPROXX gave Boston a B for the draft -- but mostly because they got a "prize" in R.J. Hunter at 28th.

But hey, we all make mistakes, especially when those mistakes are calling out someone else for a perceived mistake. There's no telling where the Celtics would be without Rozier stepping up in Irving and Marcus Smart's absence the last month, and Rozier (along with Jaylen Brown and Jayson Tatum) is making the injury-depleted Celtics an extremely watchable bunch as they guide their way through the closing days of the regular season. That trio is providing a glimmer of hope that Boston will be OK in the first round of the playoffs even if Irving and Smart aren't part of the mix.

So for the 100th time (and counting) this season, our apologies to Ainge and Rozier. Thanks for proving us all wrong.