It probably won't come to a surprise to anyone following weather as of late, but NOAA's report on Tuesday confirmed what was pretty clear - Winter 2015-16 was the warmest ever recorded across the Lower 48.

And New England led the charge - every single New England state had its warmest winter ever recorded (dating back 121 years). NOAA attributed much of that to a record-level El Nino, which helped to flood the country with mild Pacific air. Of course warm records like these are increasingly likely in an overall warming world, and El Nino helped tipped it to the top spot. It's not likely that this spell of mild weather is going to end anytime soon. 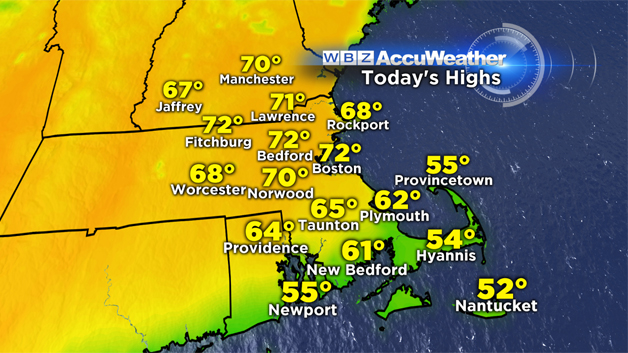 No one will be chilly today, that's for sure! Temperatures will soar into the 70s this afternoon for much of the area, the warmest day since early November. If I had to peg a region that will see the top temps, it would be areas just northwest of Boston. Cities like Lowell and Lawrence should boast some of the warmest numbers, perhaps in the 73-77º range. But it's rare for everyone to enjoy a truly warm day in March, and such is the case this Wednesday. Southwest winds are great to bring warm air inland, but not so much for the Cape, Islands, and South Coast. Highs will stay stuck near 50 along the water's edge, with rapidly warming temps the farther northwest you go. Even still, not too shabby. 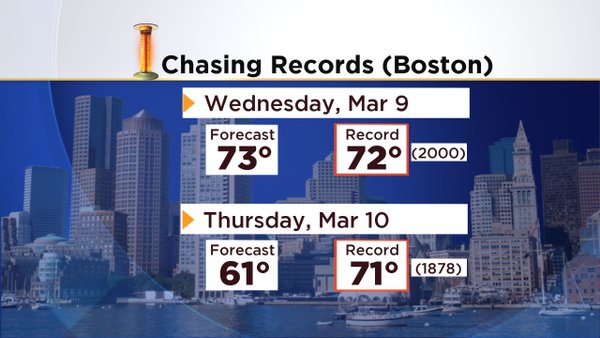 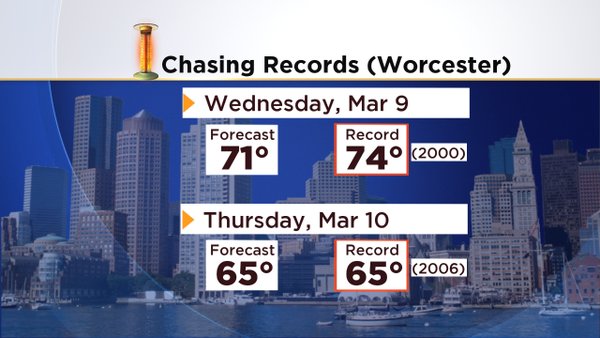 Temps this warm mean record highs will be in jeopardy for the next couple of days. Wednesday is Boston's best chance - with a record of 72º set in 2000. I'm forecasting a high of 73º. Worcester may come up a little short...with a current record of 74º. It should be a close call, though. I tend to take the 'over' in these early spring situations, when the ground is relatively dry and snowless, foliage isn't out on the trees yet, and the air is dry. That's almost always a good recipe for temps to do better than models predict. Either way, some amazing warmth for early March. Especially considering our last 2 March's were both in the Top 10 coldest all-time (at Logan)!

On Thursday, Worcester and areas in western New England will have another crack at record highs. It's a tricky forecast to time out as the front moves back south on us and ushers in a chillier northeast flow. Cape Ann and the Seacoast will get the colder air first, but it may not arrive until much later in the afternoon for areas west of Boston. That means a chance to jump into the 60s again...perhaps even the 70s for western Mass and Connecticut. So the general idea is the farther west out you are, the warmer it's going to be. 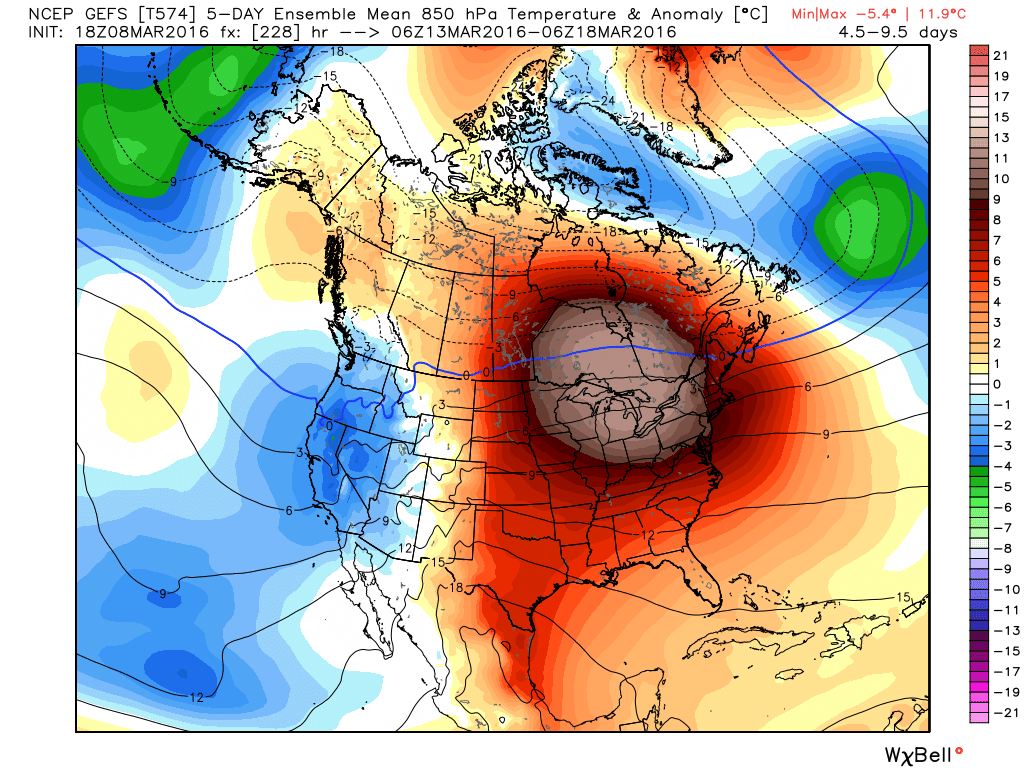 Shades of December again in the east with well above average temperatures dominating into next week. Source: Weatherbell

No significant cold ahead as a warm pattern dominates the eastern U.S. well into next week. I'm currently not expecting a day of below average temps until at least St. Patrick's Day Weekend, though it should be cool Monday and Tuesday next week with 40s to low 50s (an onshore flow). Are we completely done with winter? There always seems to be some sort of whacky storm that decides to pop up around St. Pat's...and wouldn't you know it looks like the best chance for some cold air around here. So I wouldn't completely rule out some snow before we're all done. History tells us we're generally not safe until mid-April. But by far and away, warmth is going to be dominant this month.

In fact, I've already started looking at the Top 5 warmest March months on record. Not a stretch to think we may end up in that Top 5. The whole spring outlook is for warmer than average temperatures. In general I'd expect a lot of 'warmest on record' or close to it headlines over the next few months. We often see the effects of El Nino lag the peak of the event by several months. It takes a while for all that ocean warmth to be released into the atmosphere and spread around the globe. So while it's already been a very unusually mild couple of months, there are likely going to be several more to come. 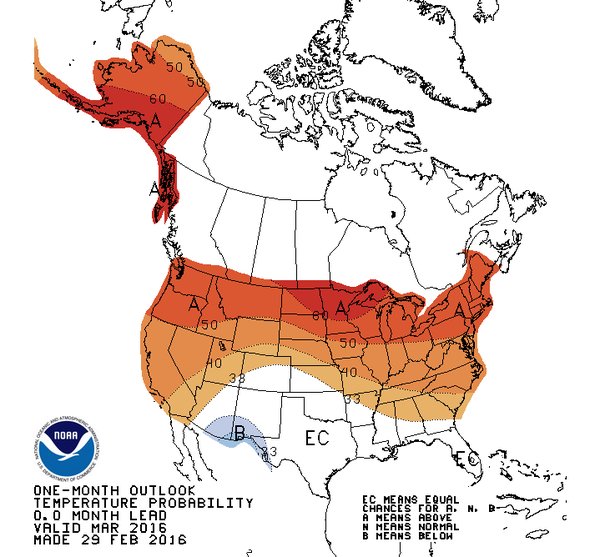