BOSTON (CBS) - In Massachusetts, it is legal to smoke and ingest marijuana and grow your own plants. The goal was to have retail marijuana shops open by July 1. Steven Hoffman, Chairman of the Cannabis Control Commission, answered our questions about where the process stands, and when the public is likely to see recreational pot shops.

What can adults who want to use recreational marijuana do as of July 1?

Hoffman: We are meeting our legislative mandates, so we started with final regulations that were approved on March 15, we started accepting applications on April 1. The legislation says that we cannot approve applications before June 1. There is nothing in the legislation about July 1, but I recognize it as an expectation of the public. We have said from day one we are going to try and meet that expectation, but we're going to do it right and it's more important for us to do it right and to think about what this industry looks like July 1 of 2019 and 2020. So it's going to roll out probably a little more slowly perhaps than people expected and I'm sorry that those expectations have not been met, but again, they're expectations, not a legal requirement.

On Thursday, the Commission is voting to issue the first cultivation license. When will licenses for recreational retail stores be voted on?

Hoffman: We can only move as fast as the license applications come in. As of last week we reported in our public meeting we had 53 applications that are complete. Of those about a dozen are retail. So the way the process works, the application is complete, then we start our own internal review, and we send it out for a background check, and we notify the city or town that this application is being reviewed. The city or town has 60 days to get back to us. So the question is, what sequence the applications come in, who has priority? But in this queue of 53 there about a dozen retailers. So we have got the material to work with, it's just a question of the sequence and the timing. 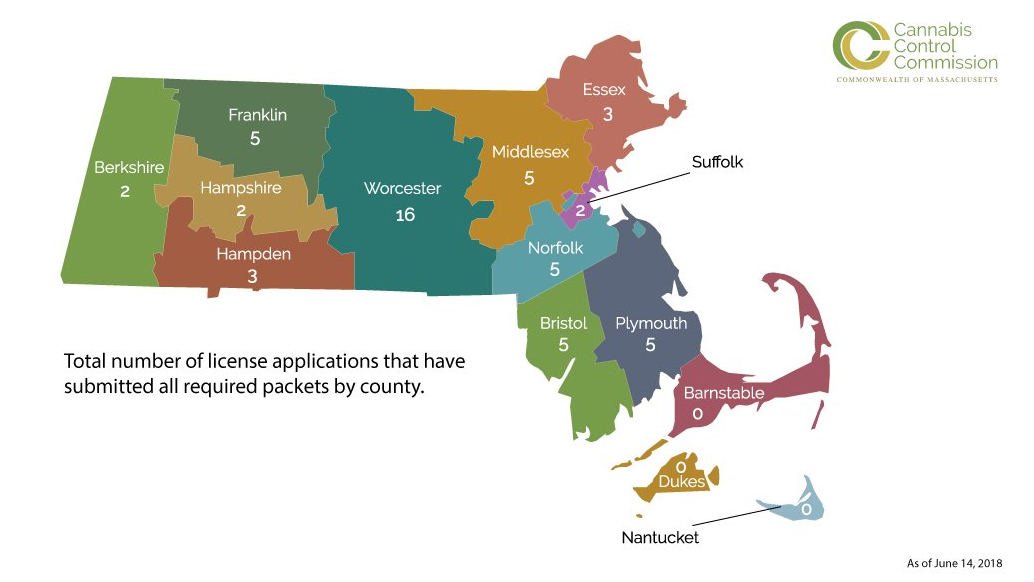 For people who don't want a marijuana shop in their town - what do you want them to know about the process?

Hoffman: The cities and towns have an absolute right to be a partner in this process. Licenses are issued at the state level only, but the cities and towns have a right to make sure that it works for their community and the legislation allows them to ban if they choose to do so. Forty odd communities have banned. There have been a large number of communities that have put moratoriums in place, but those are not bans, those are just saying, 'OK now the Commission's issued their final regulations, we want time to go through our planning process to make sure it works for our city and town.'  I think that's perfectly acceptable... It's going to make it a relatively slow roll-out.

Is there pressure to get the licensing done correctly, or quickly?

When do you anticipate that first store to open up?

Hoffman:  I am going to not answer that question just because there are too many moving parts. All I can tell you, the process as I said, we are going to do our first vote tomorrow; we have to vote on this. There is no guarantee, but the staff is going to make a recommendation tomorrow (Thursday) on Sira. We're going to vote on it and then every week you're going to see three, four, five, or six of these [votes]. Reminder if we approve these, they are provisional. The facilities have to be built out, and we have to go inspect them to make sure the facility actually matches the regulatory requirement. So it's just - there's too many moving parts. We have got to hear back from the cities and towns and so there's just too many moving parts for me to make a precise forecast. I would love to, I really would love to.