BOSTON (CBS) – Now that July has ended, what a ride it was. For many cities and towns, July was a record-breaker, but probably not for the reasons you'd like.

WHERE DID SUMMER GO?

June was record hot. The warmest June on record for Boston and many spots in southern New England. Nine days of 90°+ highs, including a sweltering 100° on June 30. It wouldn't be a stretch to think that pattern would continue right into July. The days surrounding July 4th don't typically harken thoughts of chilly temperatures, but that's exactly what arrived.

While Mother Nature cleared the skies for the afternoon of July 4th, it was far from an ideal start for many summer vacations.

For only the third time since 1872, June was warmer than July. The month ended with no heat waves, or even prolonged stretches of warm weather. The average temperature for the month was 1.7° below average -- the first cooler-than-average month since February for Boston.

It wasn't just a cool start to July, but it was also a wet one.

The first three days of July each had over an inch of rain, tying the record for number of days straight with 1" or more. By July 3rd, Boston already had more rainfall than the entire month of June.

Elsa brought extensive flooding to an already soaked and weakened part of the state.

Roads and basements were flooded as rainfall rates exceeded the drainage efforts.

Officially, Boston picked up 2.04" of rain from Elsa, but plenty of towns inland in Worcester, Middlesex, and Norfolk County saw nearly 4". 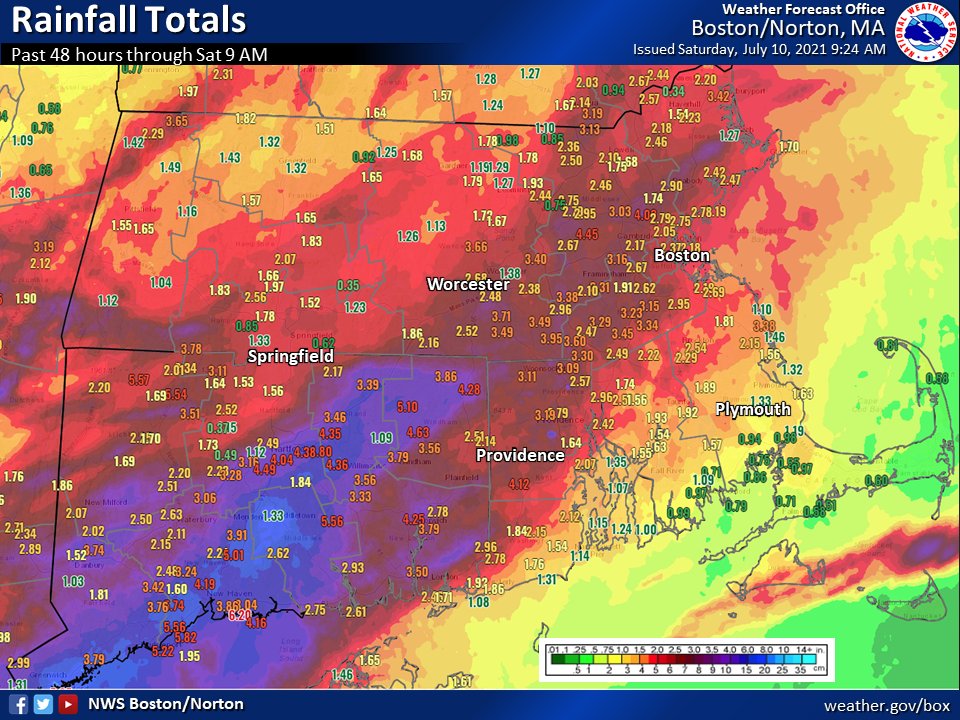 A few nickel-and-dime showers pushed through July 10 and 11 before yet another flash flooding threat arose.

July 12, Boston picked up another 1.21" of rain, pushing the total number of 1" or more days to five, tied for second place for most 1"+ days in month.

While the next 19 days slowed the volume of rain falling on Boston, it would still add another 1.18" to the rain gauge.

A staggering 19 of 31 days were recorded with measurable rain, the most on record in July for Boston.

The total amount of rain that fell was 10.07". That was enough for the second wettest July in Boston since 1872.

Worcester got drenched with over a foot of rain, making it the wettest July on record at 13.85".

Amazingly July 2021 was the third wettest month of *ANY MONTH* for Worcester.

You may be thinking, "at least the drought is gone through Massachusetts." Even through all that rain, the mid/outer Cape and Nantucket remain in a moderate drought -- a total of about 3% of the state.

A normal July is usually met with plenty of outdoor time (and hopefully plenty of sunscreen). July and August are statistically our sunniest months of the year.

Not July 2021! This was tied for the third cloudiest July since the 1950s and the second cloudiest month of the year!

Despite EVERYTHING... all the rain, the storms, the damage, Tropical Storm Elsa, the cool temperatures... Mother Nature redeemed herself a bit. The last two Saturdays in July were absolutely fantastic -- sunny and 70s. So maybe July wasn't a COMPLETE wash.