BOSTON (CBS) -- There is a reason Tom Brady is Tom Brady, though even that is an oversimplification. The truth is that Brady is Brady for multiple reasons, from his intellect to his toughness to his accuracy, all of which were on display in the final minutes of Super Bowl LI, simultaneously the greatest comeback and greatest collapse in the history of America's biggest game.

And it is Brady's ability to make the most difficult plays look easy – at the most trying times – that has delivered him five Super Bowl titles, more than any quarterback in the history of the NFL.

So here's a question for you: what was Brady's best throw of Super Bowl LI? And if you settled on the following, there is good reason.

On the second play of overtime in the Patriots' eventual 34-28 victory over the Falcons, Brady completed a 14-yard out to Danny Amendola that gave the Patriots a first down at their on 45-yard line. This looked like a relatively standard NFL play – and to some degree, it was – though it was really anything but. With the Super Bowl on the line, Brady landed a throw in Amendola's arms as if he were tossing a tic-tac into a thimble from the opposite side of the room.

In overtime. Of the Super Bowl. With no margin for error. With one defender coming from Brady's backside (veteran pass rusher Dwight Freeney) and another (rookie defensive back Brian Poole) blocking the path to his receiver.

Here's what things looked like just as Brady was preparing to release the ball: 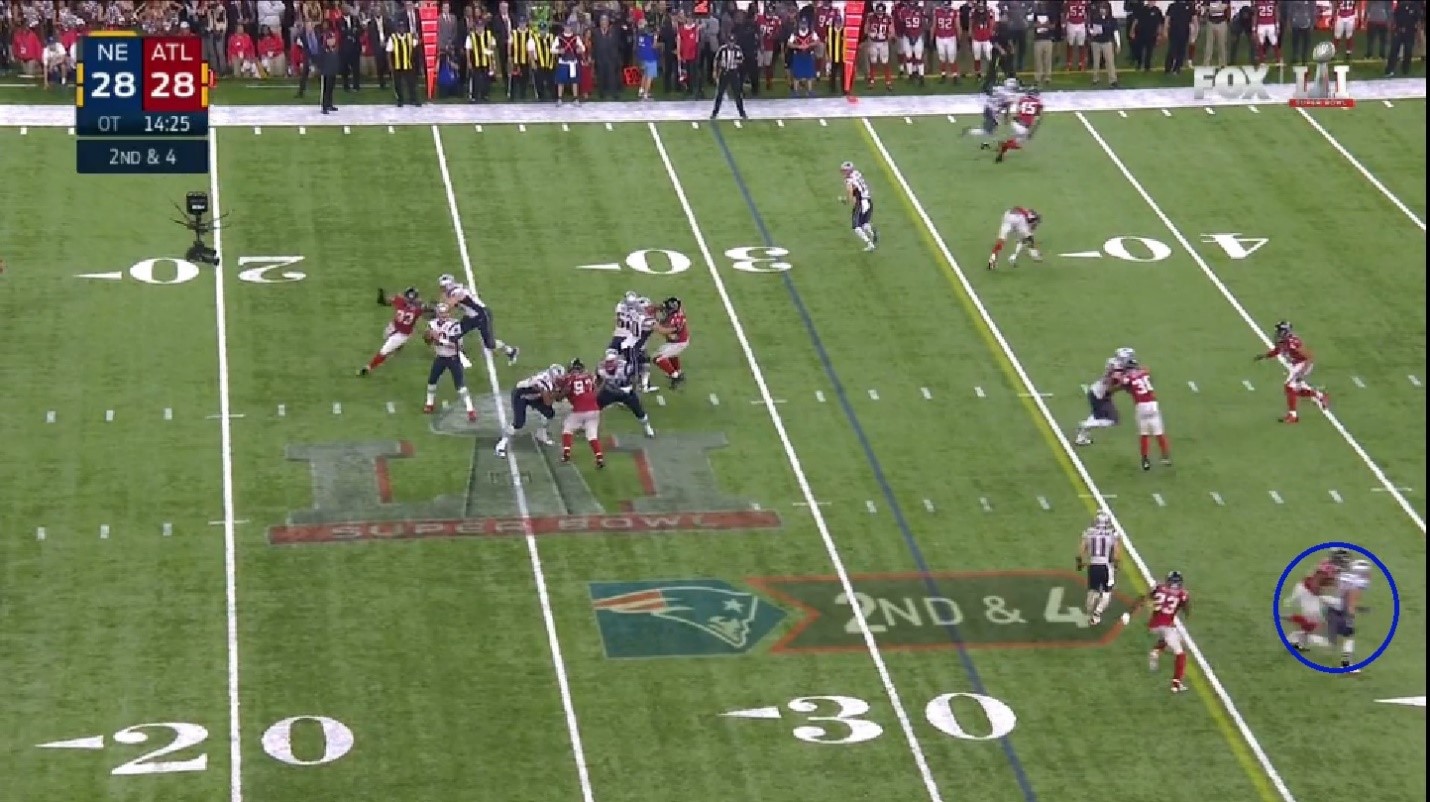 In the above photo, Amendola and Poole are circled in blue. Note that virtually no space exists between them, yet Brady already seems committed to throwing the ball in that direction. Though the ball was snapped from the New England 31-yard line, Brady's feet are straddling the 24, seven yards behind the line of scrimmage.

Here's how the play essentially finished up, with Amendola cradling the ball before getting his feet in bounds, stepping out at the New England 45. Poole is a step behind now, but he's in the passing lane. That is hardly bad coverage. 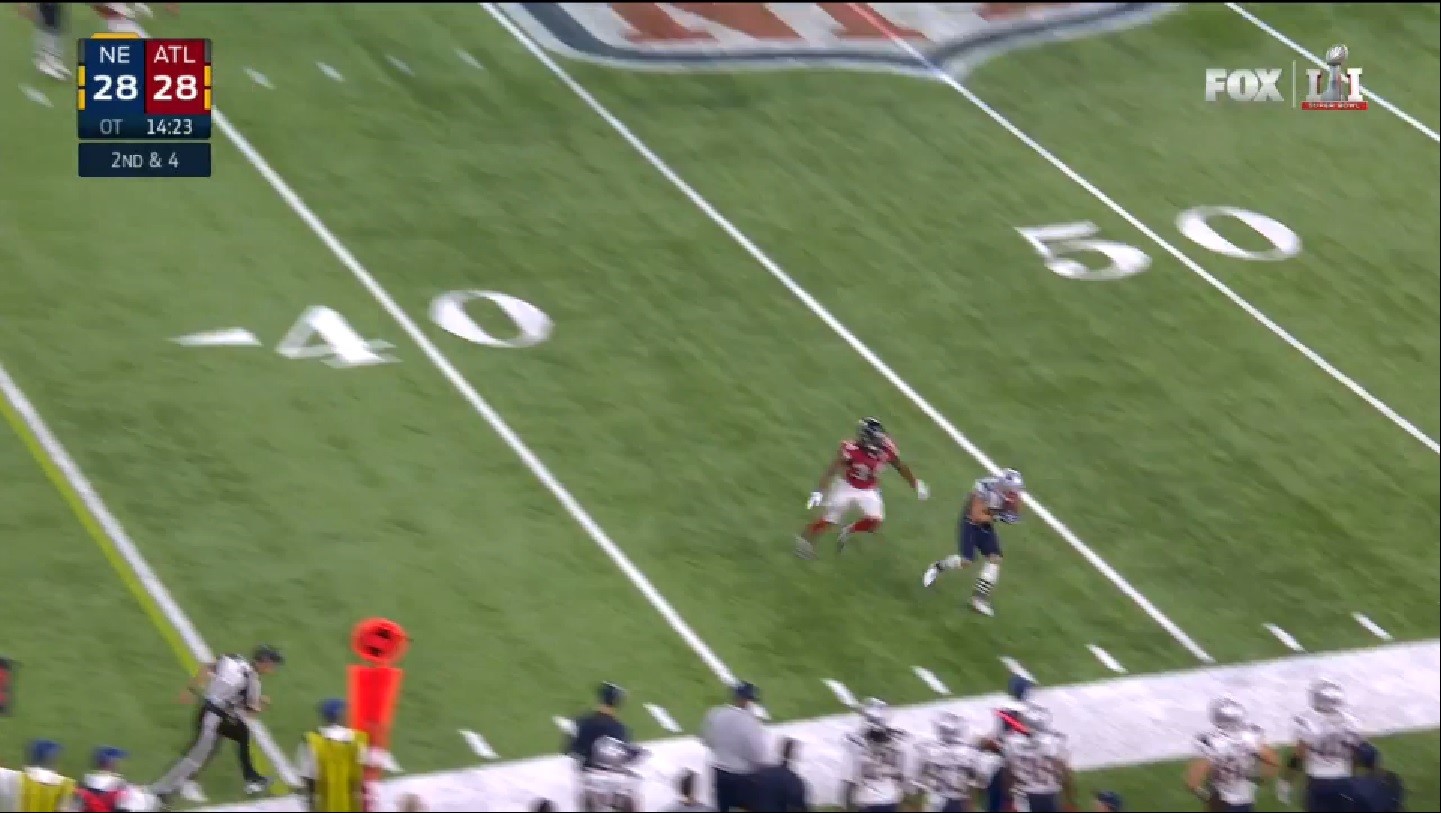 Now, we know what you're thinking: what's the big deal? If you watched this throw on television, this seems like a standard NFL throw – and, again, it is some to some degree. (The good quarterbacks make this one, the average or bad ones don't.) But if you were in the stadium on Sunday night, this particular play undoubtedly left you in awe. 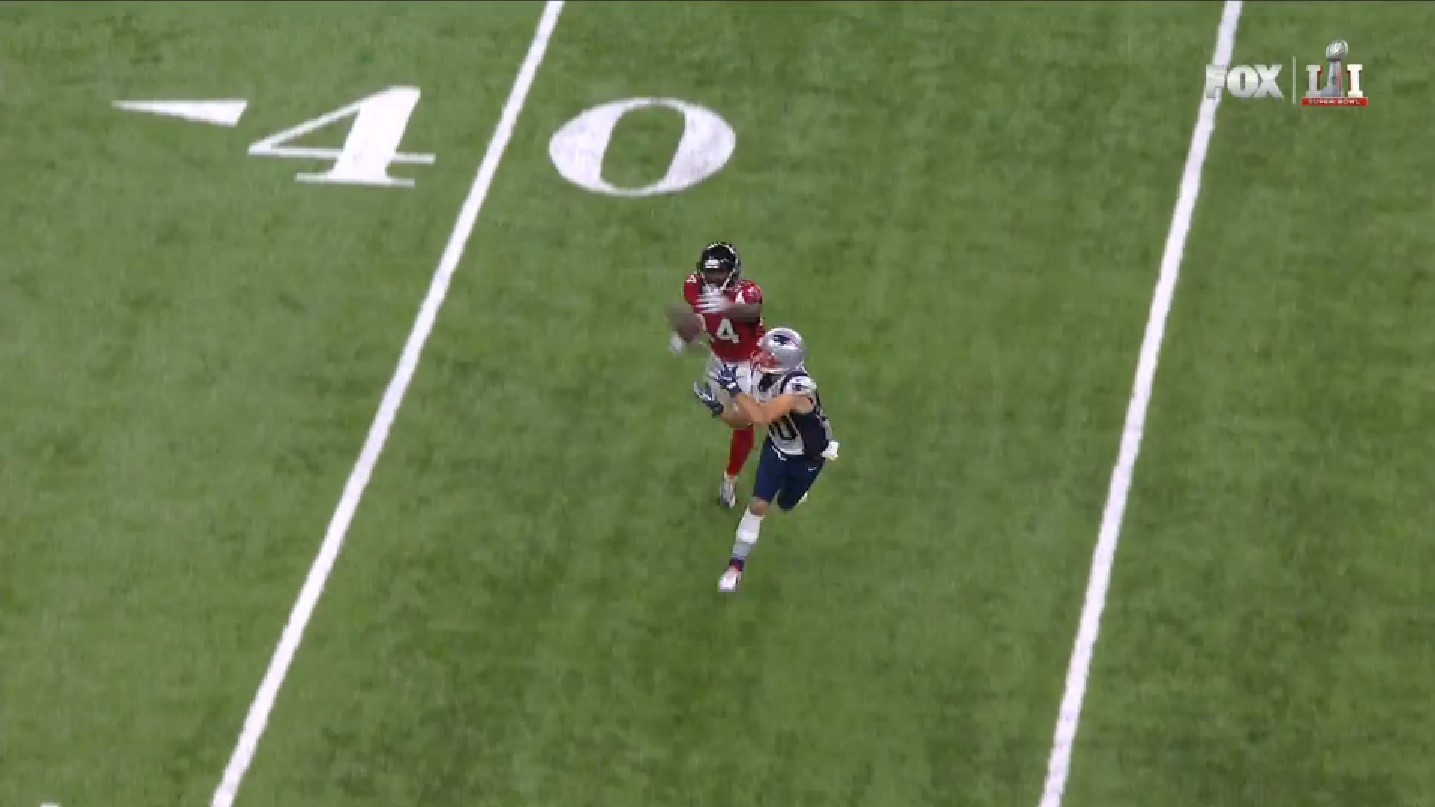 Here, again, you can see that Poole is in good position to defend the pass. As the ball settles into Amendola's hands, you can see that slides by Poole's hands by, at the very most, a foot or so. Remember, too, that Amendola is listed at (ahem) 5-foot-11, which seems like an awfully generous number for someone who's probably closer to 5-foot-9. Brady can't go too high with this ball because Amendola wouldn't be able to reach it.

Here's another peek from a different angle: 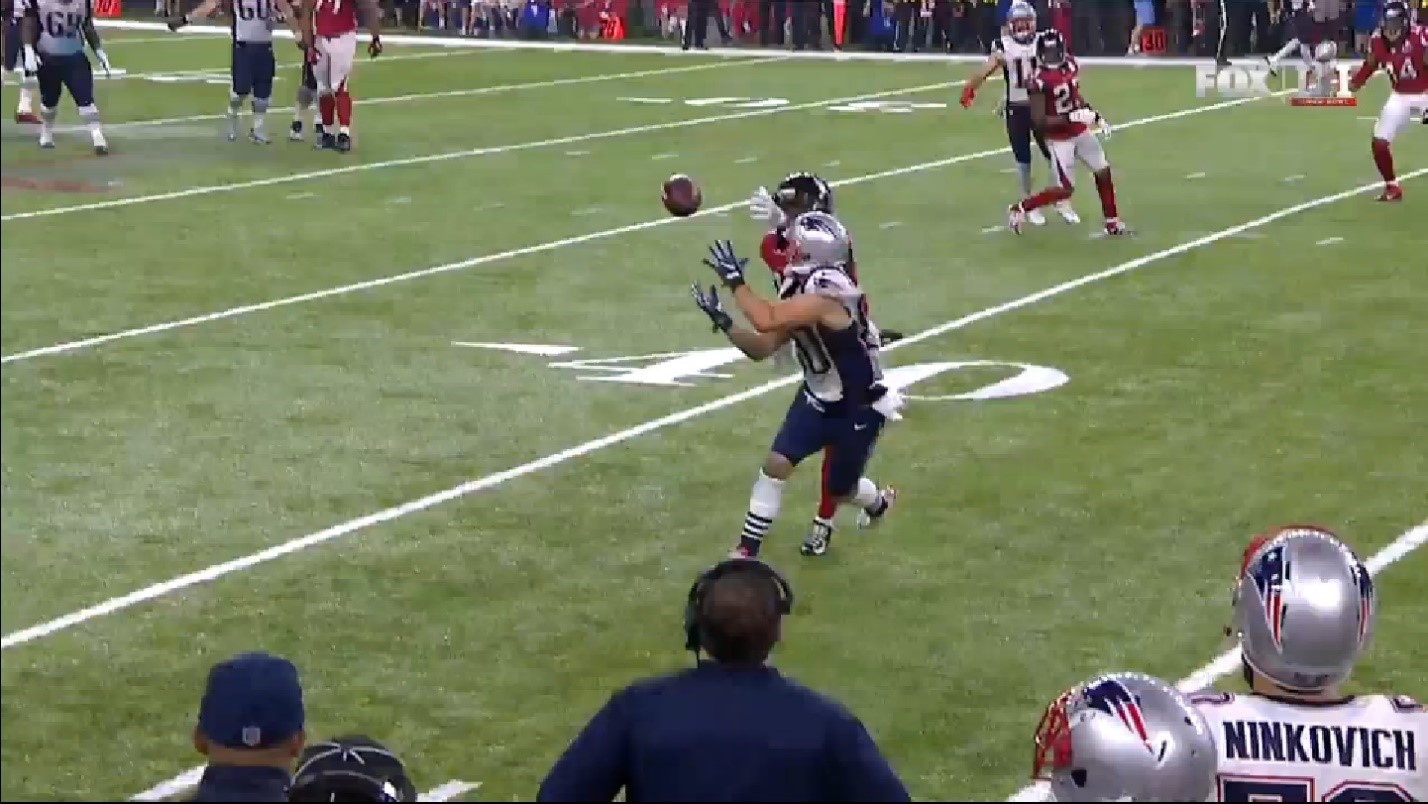 Pretty sick, right? Again, remember that this is overtime of the Super Bowl. If Brady misses this throw in any number of directions, the Patriots could be in big trouble. Poole could bat down this pass - or, worse, intercept it. And there was nobody between him and the New England goal line.

But Brady being Brady – and Bill Belichick being Belichick – the Patriots trusted Brady to make this throw.

Now let's do some math. While the play went for a 14-yard gain – again, what's the big deal? – the ball actually traveled a good deal further. Again, Brady was straddling the 24-yard line. By the time Amendola hauled in the pass, the receiver's left shoulder and, ultimately, feet went out at the 45-yard line. (That's actually 21 yards downfield from where Brady threw the ball.) If we draw a triangle and use a little geometry, we can determine exactly how far Brady's pass traveled. 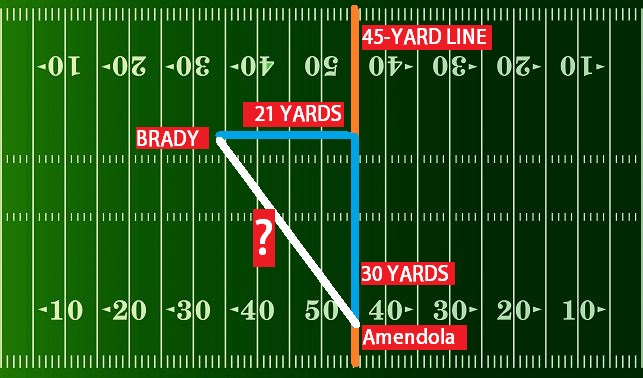 Remember, Brady was on the left hash. That's 30 yards from the right sideline. So in order to throw a 14-yard completion, Brady actually had to throw the ball 21 yards straight downfield and another 30 yards to the sideline. That makes the distance of his throw a simple equation – A2 + B2 = C2 – which gives us the following answer:

Got that? In the Super Bowl. In overtime. With a defender coming at him and another blocking the path to his receiver. Brady threw the ball before Amendola made his break, dropping the pass into his diminutive receiver's arms, beyond the reach of Poole, and he did it from 36 yards away.

A tic-tac into a thimble, folks.

That is why Tom Brady is who he is.