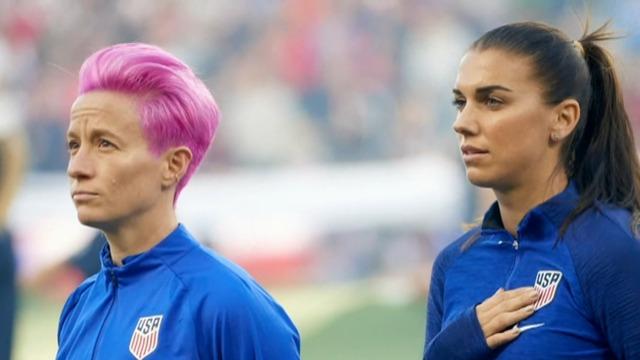 BOSTON - It's a deal unprecedented in the world of big-time soccer - a new collective bargaining agreement with the U.S. Soccer Federation that provides equal pay for the men's and far-more-successful women's teams.

The U.S. women won their most recent World Cup in 2019, but by then, they were already three years into the battle for pay equity that led to today.

"We came together as laborers; we had negotiations with our employers; and we came out at the end of it," said women's national team forward Margaret Purce, who played for Harvard and the Boston Breakers. "And everybody was really happy with the deal."

But the celebration is tempered by a question: What about the rest of America's unequally-paid women?

"There's no reason why they should be making $10,000 less," said a young millenial man we spoke with along the Charles today. "It took entirely too long to get here, so I'm glad that we finally are here."

"As a young woman, do they see me and think oh, I'll probably leave? Do they not see me as as hard a worker if I'm planning on starting?" asked a young female passerby. "That's kind of a big issue."

And to former Lieutenant Governor Evelyn Murphy, a crusader for equal pay for decades through The Wage Project, a nonprofit she founded, the breakthrough underscores how hard it is to win wage equality.

"It sets a standard for all women in America to understand that if you want to be paid fairly, if you want equitable opportunities to move up, it's really a fight," she says.

Is this achievement by the women's soccer team a sign of more change to come? With our current labor shortages, workers of all kinds seem to have a bit more clout.

But keep in mind, the men took a pay cut in their contract to make this work. And you wonder how often that can be duplicated elsewhere.

Keller: Supreme Court decision a reminder that not voting has consequences

Jon Keller is Political Analyst for WBZ-TV News, and his "Keller @ Large" reports on a wide range of topics are regularly featured during WBZ-TV News at 5 and 6 p.m. Keller's commentaries are also seen weekday mornings at 5:30 a.m. on WBZ This Morning.