Winter so far in southern New England? A piece of cake. But it's not finished just yet. 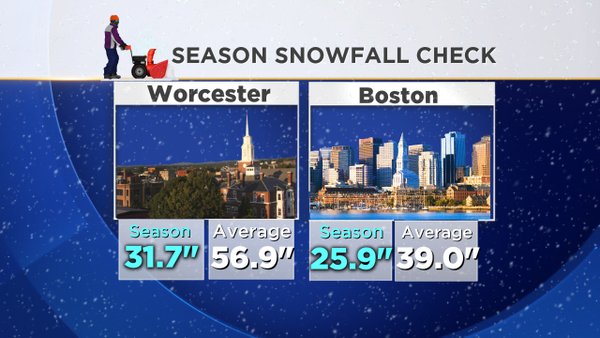 There's an odd fascination with the DISTINCT end of winter.

I can't tell you how many times people have asked 'is it over?'...'how about now?'....'is THIS the end of winter?' Frankly whether you are into Meteorological Winter, Astronomical Winter, or go away winter...the season isn't over until the atmosphere decides to warm up. In March, that atmosphere, particularly the upper atmosphere, is plenty cold. It's still transitioning out of the cold dark days of January and February. And so the *potential* for winter to show up in spurts is on the table well into April. The upcoming stretch is a good reminder that even after a spectacularly warm start to the month, you can never truly write it off this early. 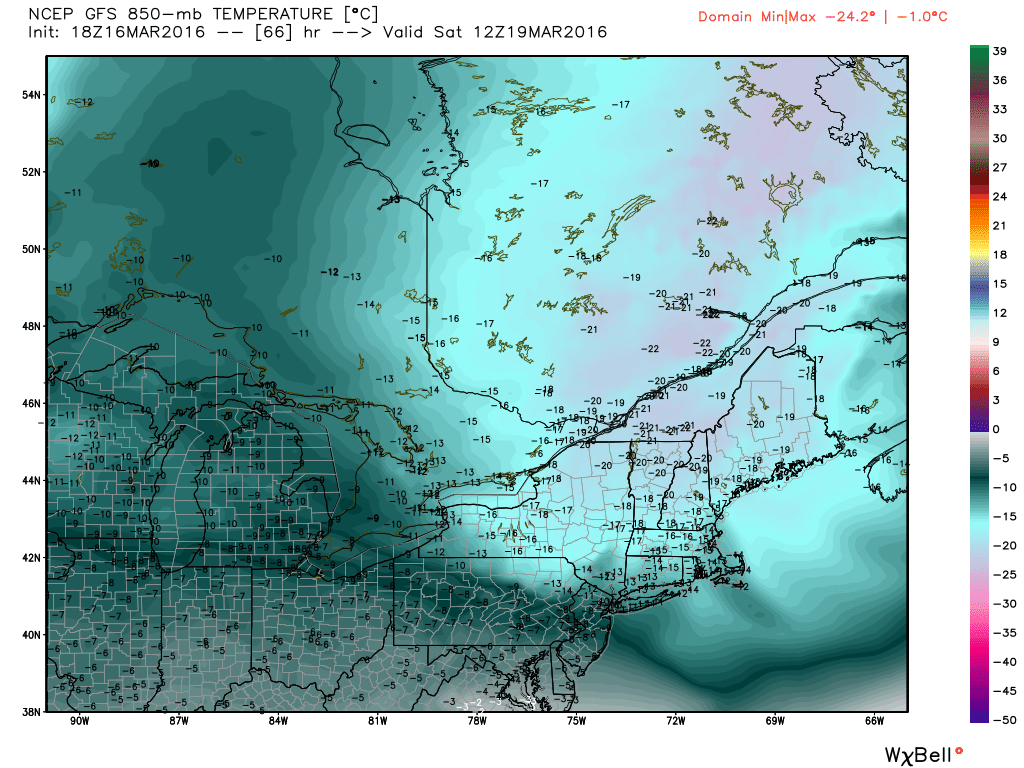 Very impressive cold in swoops in Friday night into Saturday. These are temperatures at 850mb (several thousand feet up) but translate to mainly 30s at the surface: Source: Weatherbell

The stage setter arrives Friday, with a strong polar front diving down through the area during the day. Rain showers and, behind them, some snow showers, will push through as the winds pick up and the cold air pours down from Canada. By the overnight, we're talking wind chill in the 10s and air temps in the 20s. Still time to use that fireplace! With such a chilly air mass in place we'll struggle to even leave the 30s on Saturday, except for the coastal plain. And in reality that's not very unusual...it will only be about 6º below average. Typical for mid-March.

Cold air is still entrenched on Sunday, and this is when we turn our attention to the coast. There are still some delicate atmospheric moves that need to take place, and there are questions as to where the exact track will end up. But chances are increasing that an 'insider runner' track up through New York or an 'all out to sea' track into the Atlantic are both unlikely. At least *some* impact to New England is in the cards Sunday PM into Monday morning, and the next couple days will provide a better idea as to how much rain/snow we're talking about here. Unfortunately there's just no skill/ability to talk totals or exact rain/snow lines 4 days in advance. But the potential for some big snow totals (>6") is there. 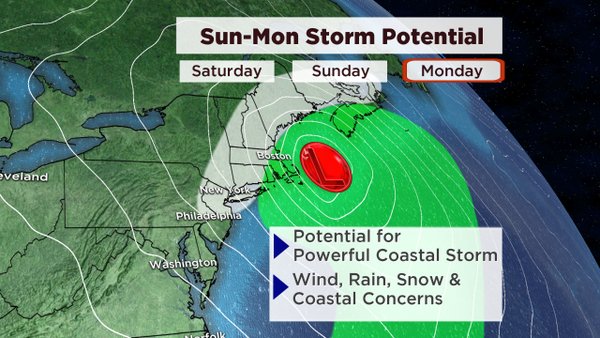 This has been speeding up a bit as model guidance latches on to the timing of the energy responsible for the storm. It looks like rain/snow could move in as early as Sunday afternoon, especially across SE Mass. Then that would fill in during the evening/night from east to west. That timing is key because there are a ton of St. Patrick's related events going on, including Southie's parade. A little faster and we could have some issues on our hands. So definitely stay tuned for updates on when this all moves in.

As for departure, there's good news for Monday business/vacation travelers, etc. It looks likely that the storm starts pulling away early Monday morning, so that most of the day we'd just be dealing with gusty and cold conditions. That places the majority of our rain/snow during Sunday night.

There's a tendency for models to place storms a little too far east when looking days in advance, and then start to move back west as the storm approaches. I think this is a strong possibility here. As mentioned above the completely out to sea scenario doesn't look like a strong candidate for this...so the question becomes how far west will it end up? A low that tracks inside the benchmark (40N, 70W) will bring rain into the Cape, Islands, and Boston area for at least a time...holding down accumulations. A track right over it likely ends up producing a strong coastal front that helps to dump snow along and west of 128. A track a bit farther east brings snow to far eastern MA, particularly the Cape, but not much of anything to the west.

So we have a few scenarios still to sort out. I think the most likely case is actually one that's close to the benchmark, bringing a change to coastal rain but some significant snow for much of the area. Could there be a shift out east? Yes, there's still uncertainty. But I would plan for this potential. 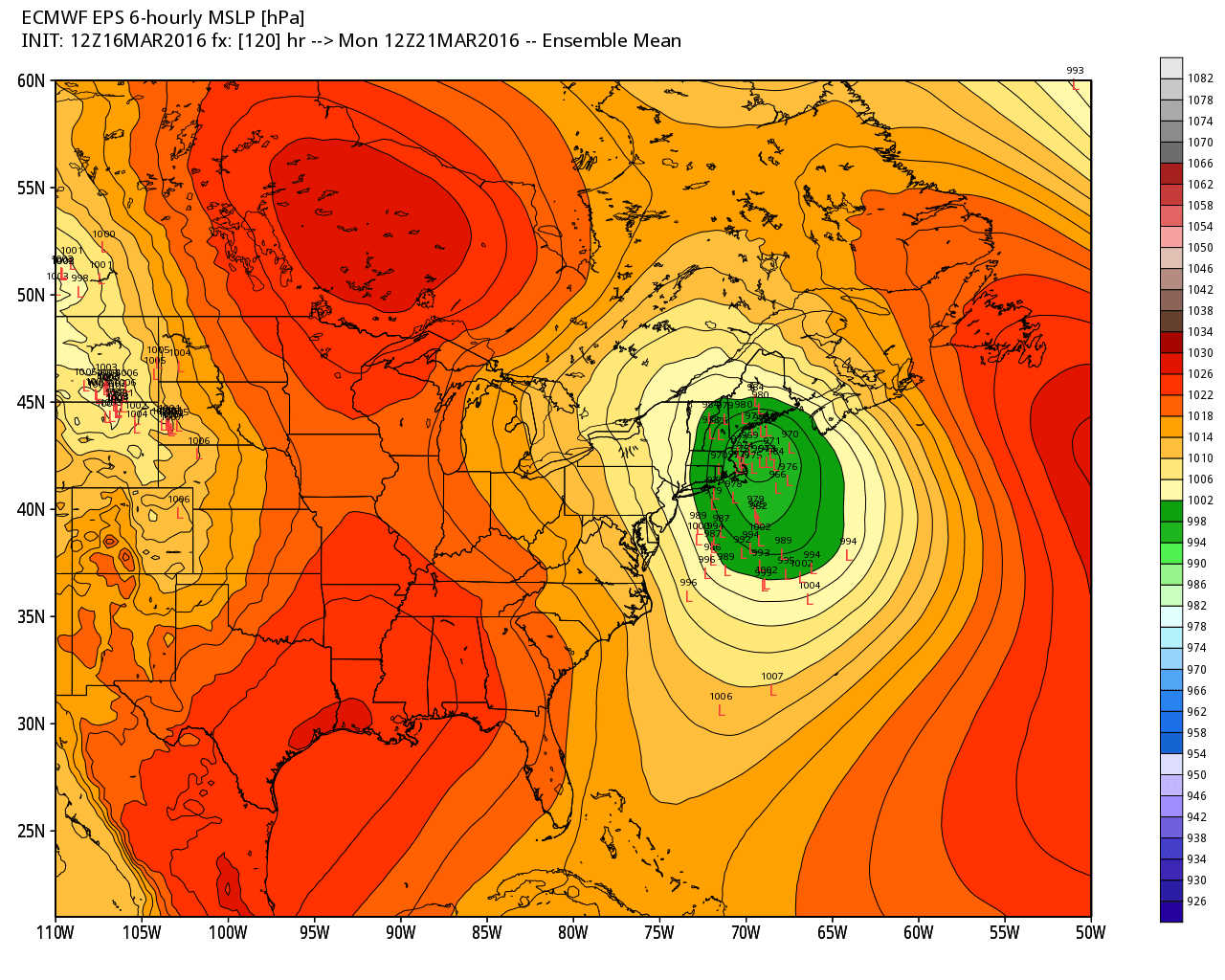 Wednesday's 12z EPS showing most members clustered close to our coast, with only a few renegades out to sea. Still, there is a spread in outcomes to consider. Source: Weatherbell

Will It Melt Right Away:

Not in the following 48 hours, with some very cold air for late March swinging in. Tuesday looks quite cold (30s) with a touch of moderation on Wednesday. So it won't all run down the gutters immediately. But the weather looks much warmer toward the end of the week with some significant melting of any snow that falls. Such is often the case with late season storms - there's just too much daylight (and at a steeper angle) for it to survive for long. Especially fresh snow, which melts more readily than old snow. 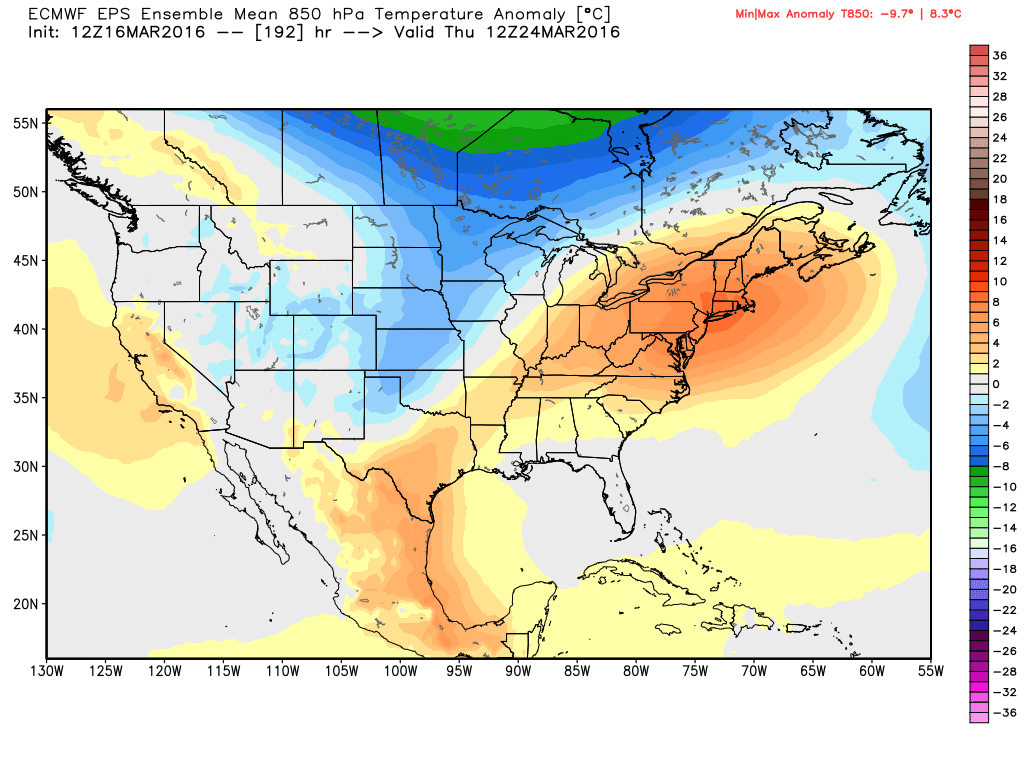 A shot of warmer air arrives next week, but not until Thursday. Immediate *fast* melting of any snowfall isn't expected. Source: Weatherbell