BOSTON (CBS) -- When the Celtics packaged Isaiah Thomas in a trade for Kyrie Irving, the team drew a wide range of reactions from fans, media, and fellow players. Even Irving himself reportedly expressed excitement to come to Boston.

Isaiah, however, had been conspicuously silent about his feelings on the trade - until now.

Isaiah has yet to tweet or post anything on social media, let alone speak publicly, since the trade happened on Tuesday. It's hard to believe Isaiah would be happy about it, but he provided the first hint at his apparent displeasure with the trade on Thursday.

NBA player Caron Butler posted a message of support for Isaiah to his Instagram page on Thursday. The photo reads: "Celtics traded a guy who played in a game for them a day after his sister died, but y'all expect players to be loyal to the franchise, sure".

The caption to the photo reads, in part: "I got traded before. It was painful. Players leave for different team, they're disloyal!!! A Judas!! Teams trade a player who gave his heart and soul to the city and team, its called business. Hmmm. Does that make sense."

Isaiah snuck in a comment on the photo, which is simply the "100 percent" emoji, indicating he completely agrees with Butler: 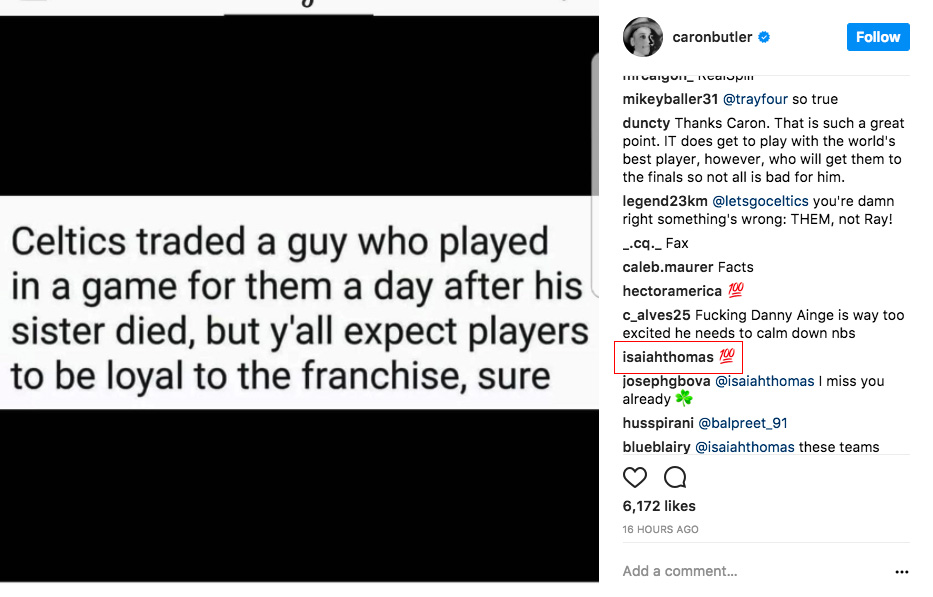 Others have echoed Butler's sentiments on the trade, including former Celtic Ray Allen. Players appear to be sick of the double-standards held by fans when it comes to "loyalty" and "business". No matter how any fans feel about the trade, it's becoming more apparent that Isaiah is not happy about it.

Isaiah was a player who showed strong loyalty to the Celtics organization, even penning a Players Tribune article expressing his love for the city of Boston and his desire to win a championship for the Celtics. But he learned the hard way this week that at the end of the day, the Celtics have a business to run and they felt that the trade was good for business.