BOSTON (CBS) -- Star treatment from officiating, particularly in the postseason, is something that we generally expect from the NBA. But it's time to make some room for the NHL.

On Thursday night, late in the first period of what turned out to be a blowout victory for the Pittsburgh Penguins over the Nashville Predators in Game 5 of the Stanley Cup Final, P.K. Subban and Sidney Crosby engaged in some old-fashioned rasslin' behind the Pittsburgh net.

After Subban lost the puck and then his stick, Crosby reached out to wrap an arm around Subban to prevent him from retrieving his twig.

Crosby scored three points from the judges for a clean takedown.

From Crosby's perspective, this was a crafty play. Any time you can keep an opposing D-man trapped behind your net and potentially spring an odd-man rush the other way, you're giving your team a good chance at a scoring opportunity.

But unfortunately for Sid -- and, well, Subban too -- the puck stayed in the Pittsburgh end, with Nashville trying to cycle the puck and create a shot. All the while, Nos. 87 and 76 remained locked in to each other on the ice.

Subban, not entirely content to just let Crosby skate free, wrapped his arms around Crosby's leg and hung on for dear life. 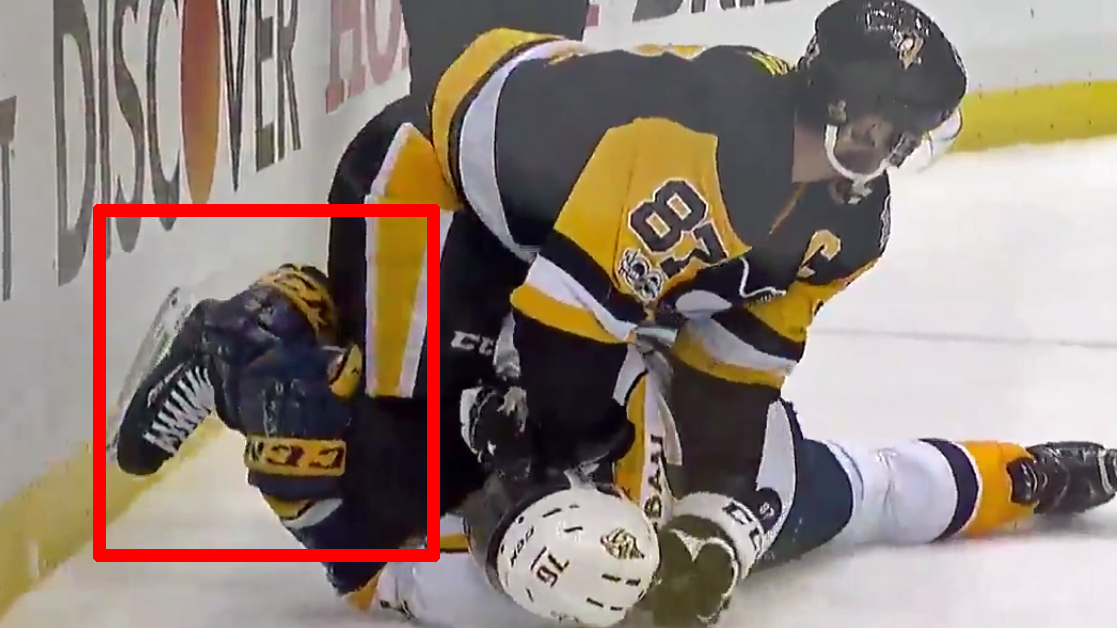 At this point, both players had committed holding. There had been more than enough of an infraction by both parties to send them off to the box. Yet, well, referee Brad Meier didn't seem to really be bothered by the activity on the ice. And he had a pretty good view of the whole thing.

Now, obviously Crosby and Subban have developed a bit of a rivalry over the course of this series. Subban got in a couple of attempted punches to the back of Crosby's head earlier in the series, and then told the media the Crosby at one point informed him that he had bad breath. Subban's clearly gotten a bit under Crosby's skin, which tends to happen in heated playoff series.

All of which led to this:

I don't know what you call that. It wasn't a "punch," per se. It wasn't a shove, either. Crosby didn't bash Subban's head into the ice. It certainly wasn't a cross-check, as Peter Laviolette argued. The best word may be a pop? Or a bop?

In any event, Crosby -- the face of the NHL and a man who's suffered so many concussions that he's missed more than 100 games as a result -- carefully guided Subban's head to the ice surface numerous times. And neither Meier nor Wes McCauley deemed it illegal.

Yes, playoff hockey, and yes, superstar Sid, but it's rare for anyone to get away with something like that under any circumstance.

But yet, they played on, and Subban eventually sprung to his feet and put Crosby in some sort of reverse armpit headlock.

Five full seconds after the punches stopped, the refs blew the play dead, choosing to send Subban and Crosby off with matching holding penalties.

Brad Meier looked rather satisfied with the work he had done.

And here's full video of the exchange:

Now, because the city of Pittsburgh and a large portion of the great country to our north gets upset whenever not-entirely-great things are said about Captain Canada, the following things must be said:

--The exchange obviously did not decide the game. Granted, Pittsburgh scored a little more than a minute later to make the score 3-0 at a time when Laviolette would have argued the Penguins should have been shorthanded. But this game was a thumping. A downright thumping. Some different officiating in this moment would not have changed that.

Considering all the lip service that Gary Bettman gives to "player safety," his league has once again proven the commissioner to be a phony.

(Some potentially related information: Video of this little exchange was nowhere to be found on NHL.com on Friday morning. For a league that has commodified career-ruining hits with the way it packages Department Of Player Safety videos as if they are trailers for Hollywood blockbusters, that seems to be a clear case of protecting Crosby's image as much as possible.)

After the game, Crosby seemed to blame Subban for initiating the whole thing.

With the 6-0 win, the Penguins are now one win away from a second straight Stanley Cup. Not bad. But Crosby certainly looks a bit hypocritical, considering the hardline stance against head contact he and his agent took in 2013.

Back in 2013, when Crosby was recently recovered from a broken jaw, he took exception to a post-whistle gloved bop to the chin from Bruins captain Zdeno Chara. It was the type of post-whistle jostling that takes place literally 100 times over the course of a playoff game, but for Crosby, it was apparently a gross offense.

Crosby's agent, Pat Brisson, sent zoomed-in, hyper-slow-motion, Zapruder-esque video footage to TSN to try to make the case that Chara, the big and mean man on the Bruins, intentionally targeted Crosby's jaw with a direct punch.

In the manipulated footage, it looked pretty bad!

But in the actual footage, it can be seen for what it was: a common hockey play, which came after Crosby had grabbed the back of Chara's neck.

Whatever one's stance on the "incident" may have been, it obviously wasn't the most significant shot. Crosby's jaw was healthy enough to the point where he didn't need to wear a face shield, and he didn't miss any time. It was a most uneventful exchange.

Anyways, Crosby's agent tried to get Chara in trouble with the Canadian media a full two weeks after the "incident," when Chara was playing in the Stanley Cup Final.

And a month-and-a-half after the unforgettable shove, Crosby was still bothered by it.

"Refs can't always see that kind of stuff," Crosby said in July 2013. "There's nothing you can do. It's part of the game. Guys are going to do that. I can't do anything. If Zdeno Chara's going to decide he's going to punch me, what am I going to do? So, you kinda hope it gets called and if it doesn't, you play through it."

On the one hand, now that he's four years older and more experienced, Crosby's craftiness and veteran savvy helped him use this knowledge to his advantage.

But as someone who complained for far too long about a run-of-the-mill post-whistle shove, his actions on Thursday night are entirely hypocritical for the golden boy of hockey.

You can email Michael Hurley or find him on Twitter @michaelFhurley.