BOSTON (CBS) – Thursday morning's thunderstorms weren't just impressive for February - they were impressive compared to most of the ones we've seen over the past couple summers! Booming thunder and vivid lightning ripped across New England in the middle of a winter's night, which is no easy feat. Trees were snapped, power went out for thousands, and cars/homes were damaged by the strong winds. 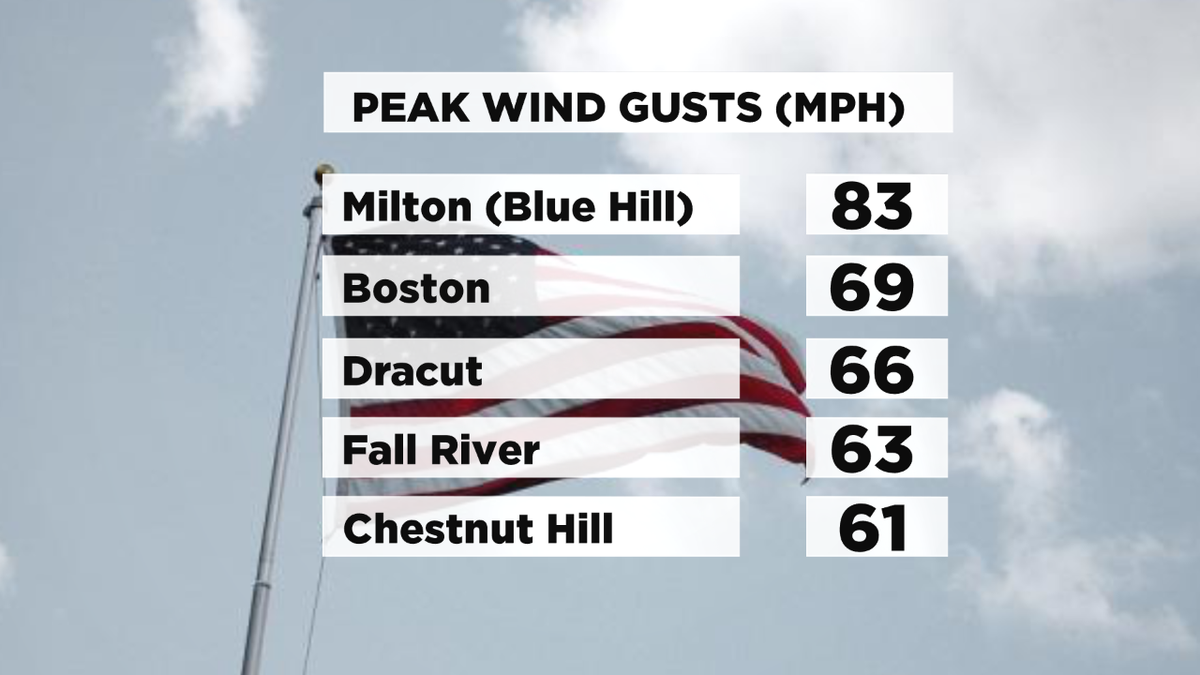 The warnings that were issued by NWS Taunton essentially all verified, with multiple gusts 55-70mph (even one to 83mph from the ASOS site on top of Blue Hill in Milton!). This of course has lead to much conjecture about how wild our weather is. But like all interesting stats and info, we need context. Was this an unprecedented event, a rare event, or expected? Let's take a look...

For starters, the damage was extensive. Likely aided by a mainly unfrozen and soggy ground from recent rain, trees came down and struck cars and homes. Fortunately, being in the middle of the night, there weren't many out and about. Had this blown through during the middle of a commute or end of a school day, it could have ended a lot worse. Most of the line was offshore before anyone was getting on the roads to start their day. Not that anyone was comfortably sleeping at home...the winds and lightning had many wide awake and listening to the windows rattling! 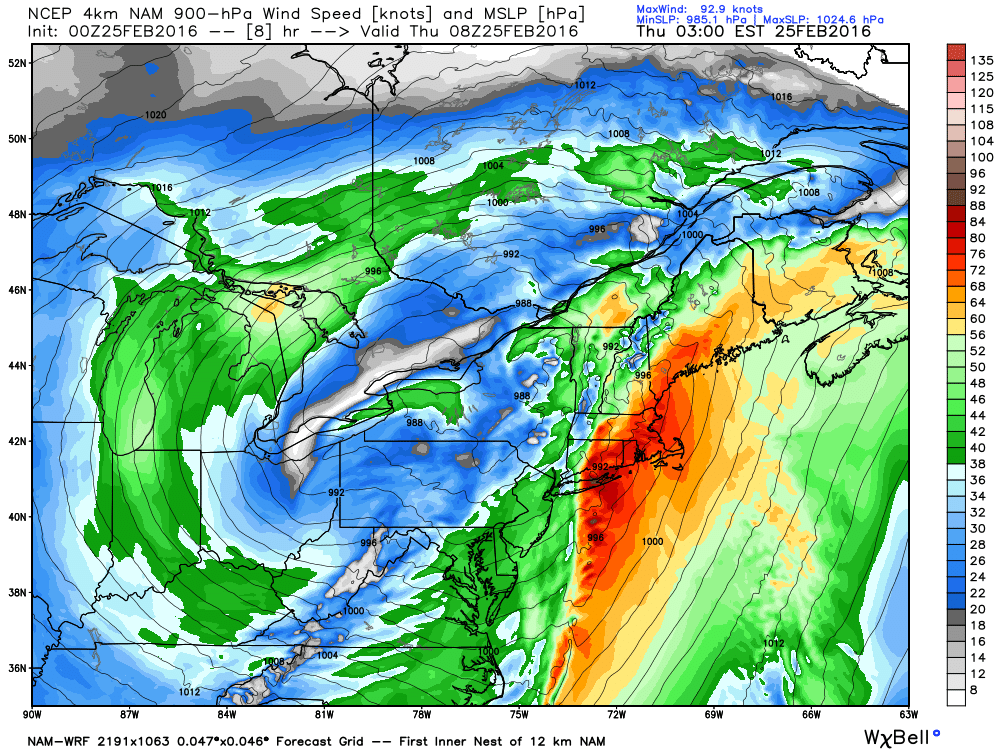 The reason these winds were so strong was due to a powerful low-level jet (LLJ) which roared just a couple thousand feet above our heads, on the eastern flank of a large 'spring' storm which brought tornadoes to the Southeast/Mid-Atlantic and snow to the Midwest. Those winds were blowing at about 85 knots! What storms are able to do is drag some of that strong wind down to the surface. And the reason we had storms was due to an extremely high level of elevated instability. Think of it this way - most of our summer thunderstorms are produced by strong heating of the surface, which leads to rising air and surface-based instability. During winter, you can't really get that in New England. There needs to be strong atmospheric forcing to make the air rise. That's the type of storm we had Wednesday night. And that's why the storms didn't dissipate during the nighttime - they didn't require surface heating to live. 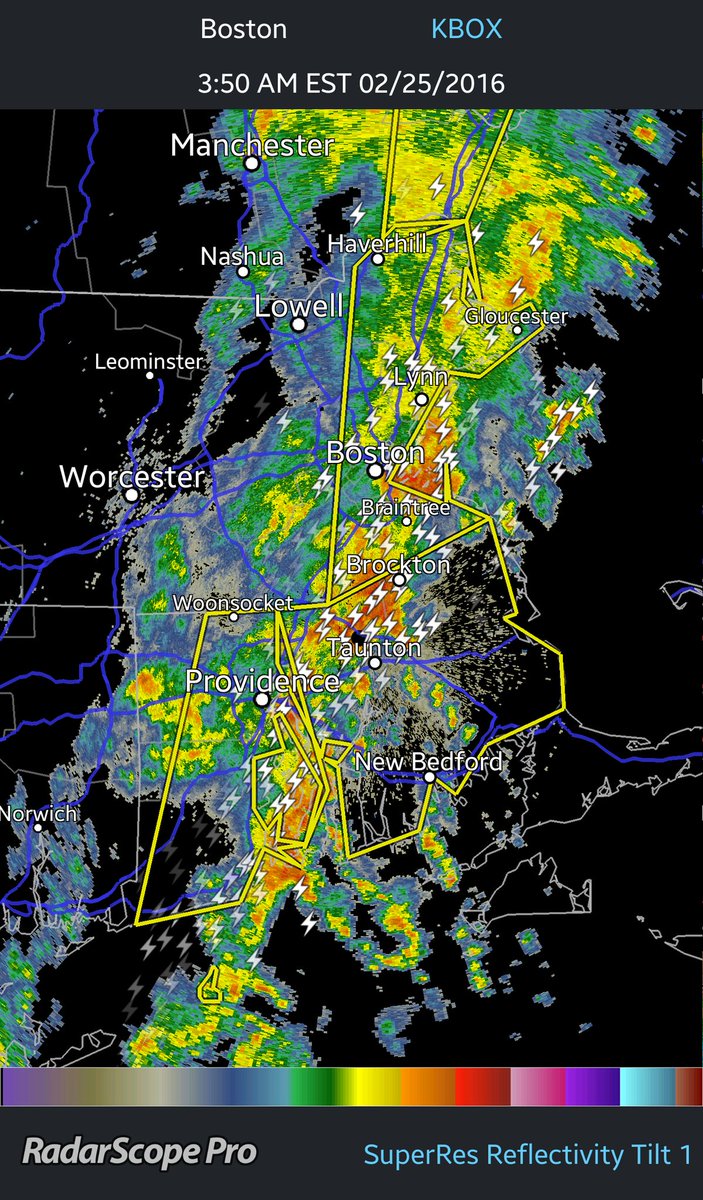 The Storm Prediction Center issued a Severe T'Storm Watch for eastern Massachusetts shortly before midnight - which is quite a rarity for the region. In fact, it was the earliest Severe T'Storm Watch on record in Boston! That being said, it was not the earlier for the state. One was issued on February 22nd, 1997 for parts of Massachusetts west of Boston. There have also been Severe T'Storm Watches issued in January before for Connecticut and Rhode Island (January 14th, 1992 and again on January 19th, 1996). So none of these areas saw their earliest Watch on record except for Boston proper. (Oddly enough, CT and RI had not had a February Watch issued before until Wednesday night). It's also important to note that SPC Watches only date back to 1970. That's a very short period of record to look back on and compare to. The SPC estimates that a Severe T'Storm Watch in New England during February is about a 1 in 25 year event. 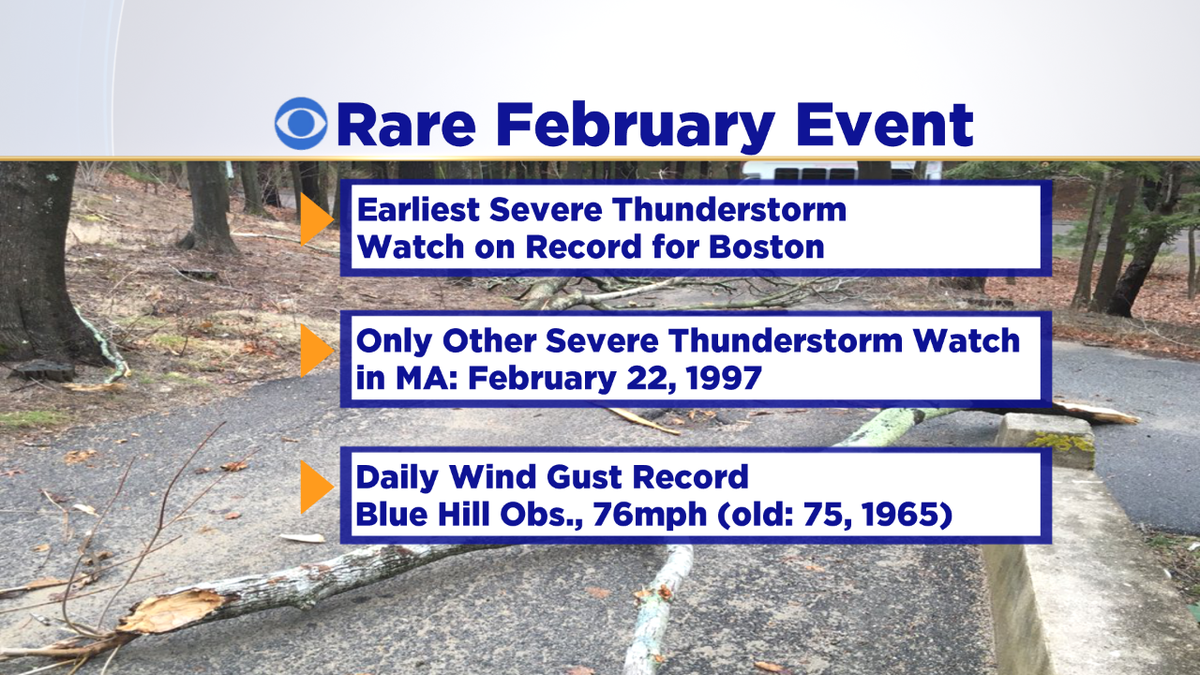 Just to our southwest, an EF-2 tornado touched down in Lancaster County, Pennsylvania. A big kudos to the 17 minutes of lead-time the NWS was able to give on this storm, which turned out to be extremely destructive.

The NWS office in Binghamton also confirmed an EF-1 tornado in Bradford County, PA which was on the ground for about a mile. As crazy as it sounds to have tornadoes in Pennsylvania in winter, this was the 14th on record for the state (3 now in the month of February). So very rare, but not unprecedented. 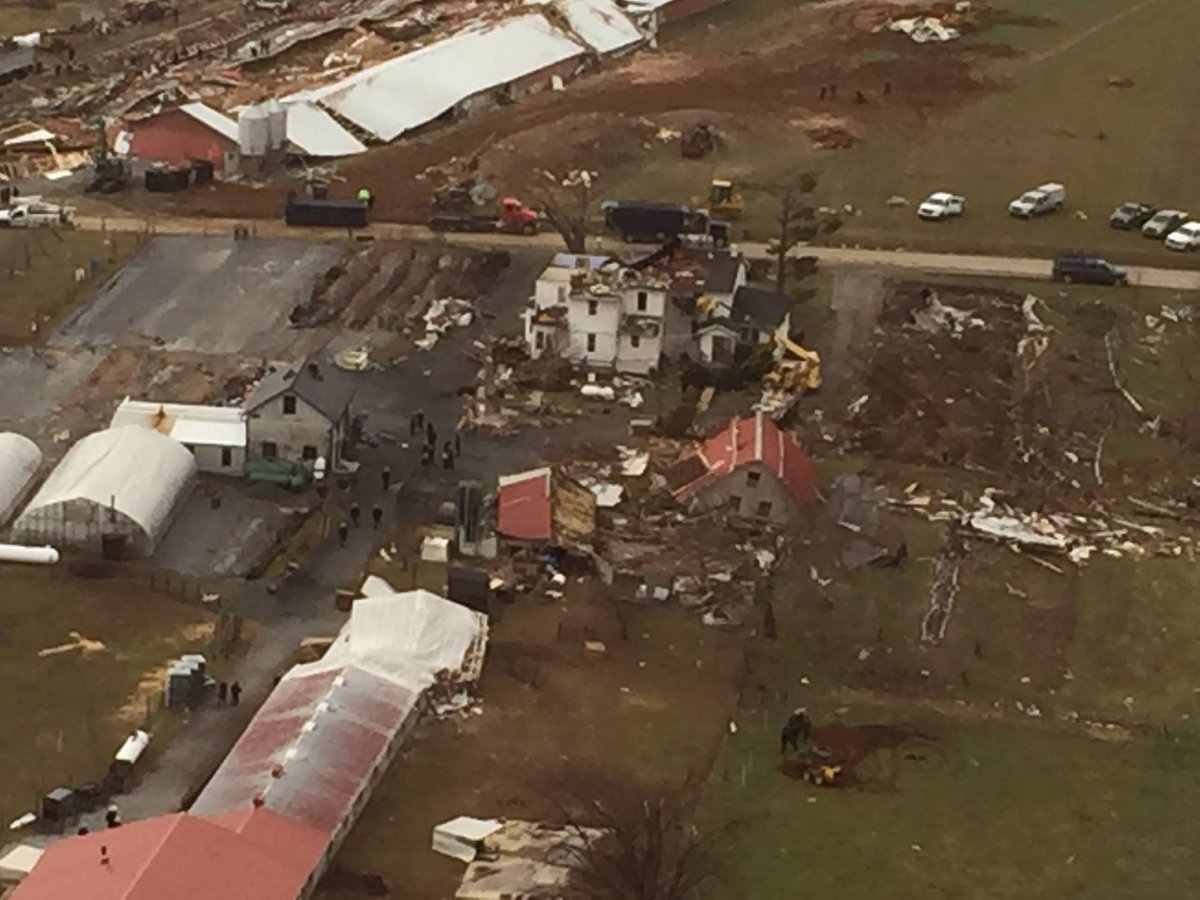 How about the temperature side of all this? It felt AMAZING...and a little unsettling perhaps, on Thursday. Highs into the 60s definitely don't come to mind when you think February, especially after the last couple of frigid Februarys. But no records were set during this mild storm. In fact, some southern New England sites weren't even close. Some of these records date back 80+ years. 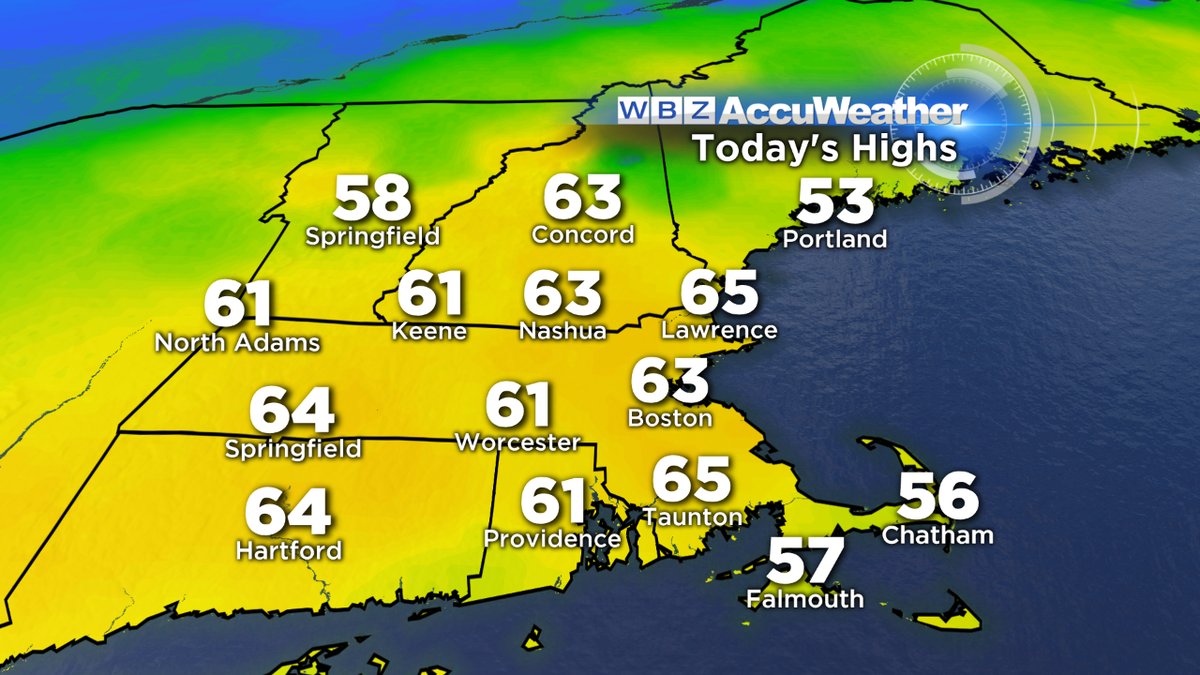 So to sum it all up, this was definitely a weird and unusual event. In particular, the amount of lightning that accompanied these storms as they rolled through. But it's not unprecedented in terms of storm results or the warmth that the system brought along. Something that you may see once ever 20-40 years in the area! And definitely an event many are going to remember both for its strength, timing, and for the lack of sleep it created.