BOSTON (CBS) -- Heading into Sunday's game, the prevailing thought around the football world was that the Patriots were a far superior team to the Cowboys.

After Sunday's game, those thoughts have only been reinforced.

Of course, the story may have been different if Tony Romo and Dez Bryant were healthy, but the two teams that did take the field Sunday in Arlington were just not on the same level.

That being said, the game was still close for the majority of the first half, and there were some negatives mixed in with the positives in the 60-minute effort.

Jabaal Sheard
Football is a complicated sport. Every single play, there are complex schemes and game plans in place that can be more intricate than most would imagine.

Other times, though, the game is quite simple. Sometimes, a play comes down to one man simply overpowering another man, and sometimes it can change the game.

That is what took place late in the second quarter, when Jabaal Sheard simply bulldozed his way through left guard Ronald Leary. Brandon Weeden, standing at his own 5-yard line, had nowhere to go, and Sheard leaped through his man and on top of the quarterback for a sack.

The Patriots then took a timeout, stopped Dallas on third down, and drove 16 yards before tacking on a field goal before halftime. The Patriots then came out in the second half and scored a touchdown on the opening possession, quickly flipping a tight 10-3 game into a 20-3 lead. The blowout was officially on, and it began with that Sheard sack.

Dion Lewis
The running back joined the team as a legitimate unknown to just about everybody, yet he's blossoming into a bona fide star in the Patriots' offense.

He turned in a solid overall day (93 total yards), but it was his work on his touchdown catch that will rightfully earn him the most attention. 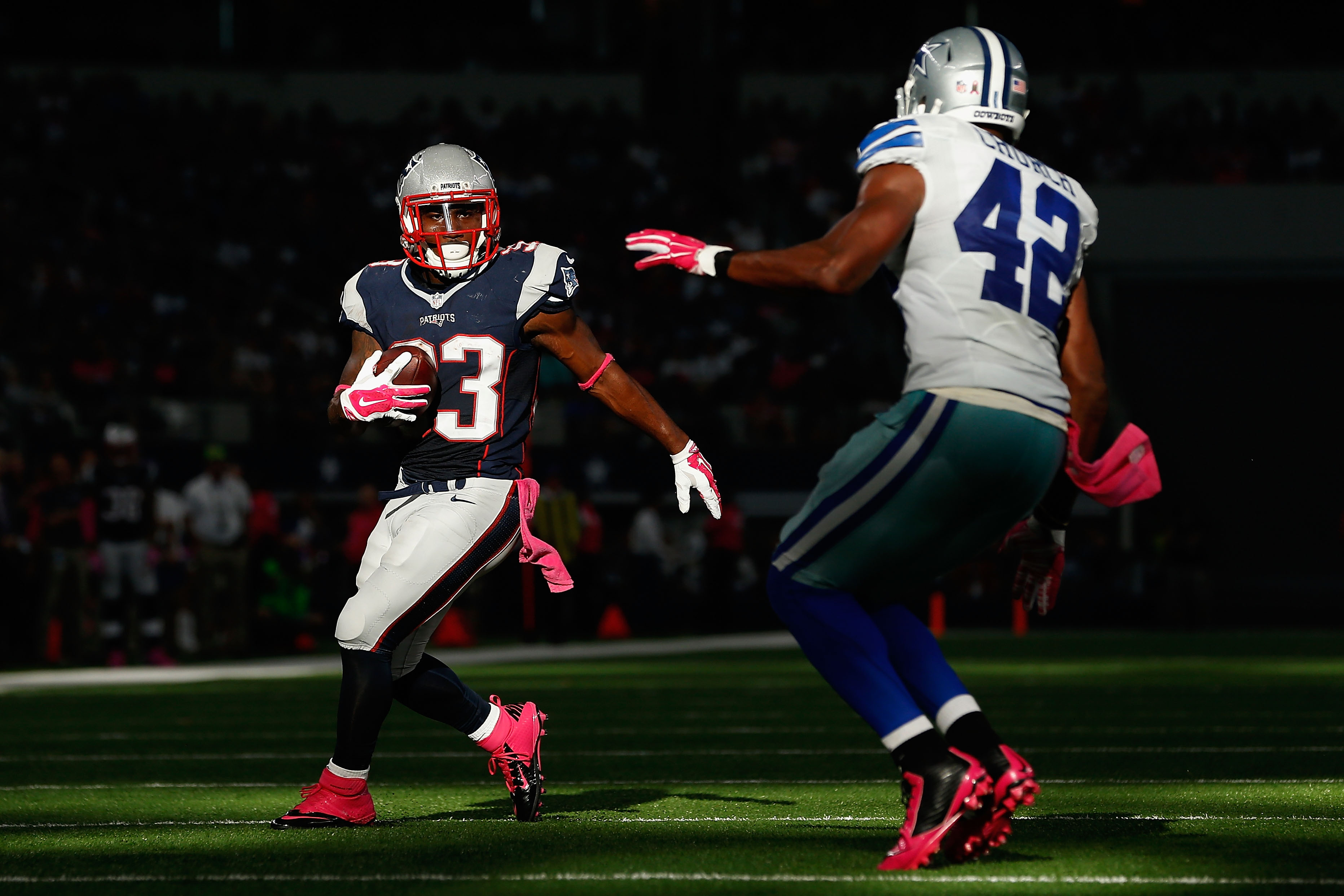 Lewis made a one-handed catch while spinning his body around in the right flat before evading five Cowboys defenders en route to the end zone. He made it from a standstill to full speed, breaking Barry Church's ankles before ducking under the tackle attempt of Jack Crawford. It was truly incredible.

Lewis entered the season with two touchdowns in his career. He has three in his first four games with the Patriots.

Tom Brady
Nothing Brady does is really surprising anymore, but it's important to credit him for not letting a relentless and vicious pass rush affect him in any way throughout this game. Brady took five sacks, the most he's taken since the New Orleans in mid-October 2013, and he took three more hits, yet he shook off every single one and remained completely unfazed throughout the game.

Most notably, he stood tall and delivered a perfect touch pass to Julian Edelman just as Greg Hardy was driving through the quarterback's sternum. Edelman made the catch, and then made defenders miss, for a back-breaking score that essentially ended the game.

"I don't think it's overlooked. I don't think anybody could question Tom's toughness," Bill Belichick said after the game. "Who's ever done it?"

(The answer is of course a dork like Bart Scott, but that's neither here nor there.)

Stephen Gostkowski
The importance of kicking field goals has come into great focus this year, as the longer extra point has caused some kickers to forget how to do their job.

The Patriots haven't had to worry about that, though, because Stephen Gostkowski has been nails. The kicker came through with a career long kick just before halftime, drilling a 57-yarder that flew dead center over the crossbar and had enough leg behind it to reach the net. Again, that was on a 57-yarder. It would have been good from about 63.

Those proved to be important points, because it allowed the Patriots to pull off their beloved "double score" going into and coming out of halftime.

Nate Solder
The left tackle did a poor job of containing Greg Hardy, leading to the quarterback getting crushed. Solder ended up adding injury to insult, suffering an elbow injury and not returning to the game.

Dont'a Hightower
The linebacker was having quite a game, including a third-down sack of Brandon Weeden, before having his day ended early. He left the game due to a rib injury, and though his return was initially deemed to be questionable, he was downgraded to out and did not return.

The Patriots can manage just fine against a Weeden-led offense without Hightower, but they have to hope the injury is not serious. Hightower might be their best defensive player.

Danny Amendola
Poor Danny Amendola. The receiver hauled in a beautiful 33-yard catch up the left sideline early in the second quarter, but it was wiped away by an offensive pass interference penalty on Keshawn Martin. (It was a blatant foul.)

Later, in the fourth quarter, Amendola again came up with a big catch for a 34-yard gain. But again, it came back due to offensive pass interference, this time on Julian Edelman. Two plays later, it was Edelman hauling in a similar pass up the left sideline for a 59-yard touchdown.

Amendola did contribute with 52 yards on four punt returns. But poor Danny.

Discipline
Speaking of flags, the Patriots could do better in terms of penalties. They committed nine for 65 yards, and as evidenced with the two offensive PIs, they cost more yards than that.

One penalty was admittedly ticky-tack (an illegal contact on Justin Coleman, which was incorrectly announced as a penalty by Devin McCourty), but it kept alive a Cowboys drive that ended in points. It would have been time to punt if not for the penalty.

Overall, it wasn't the most crisp game played by the Patriots, and though they won big, they'll have plenty of material to work with in terms of improvement for the Indy game as well as the long road that lies ahead between now and January.