Chances are you're reading this on yet another morning that started out below zero while your desktop had other tabs open for travel sites to tropical locations. Or just as possible, you may not have even noticed. There's no doubt that many of us are starting to not even notice the cold, or at least not as much as we normally would. The last two months have produced a Minnesotan feel in New England, and we're about to bury some serious records when it comes to cold. 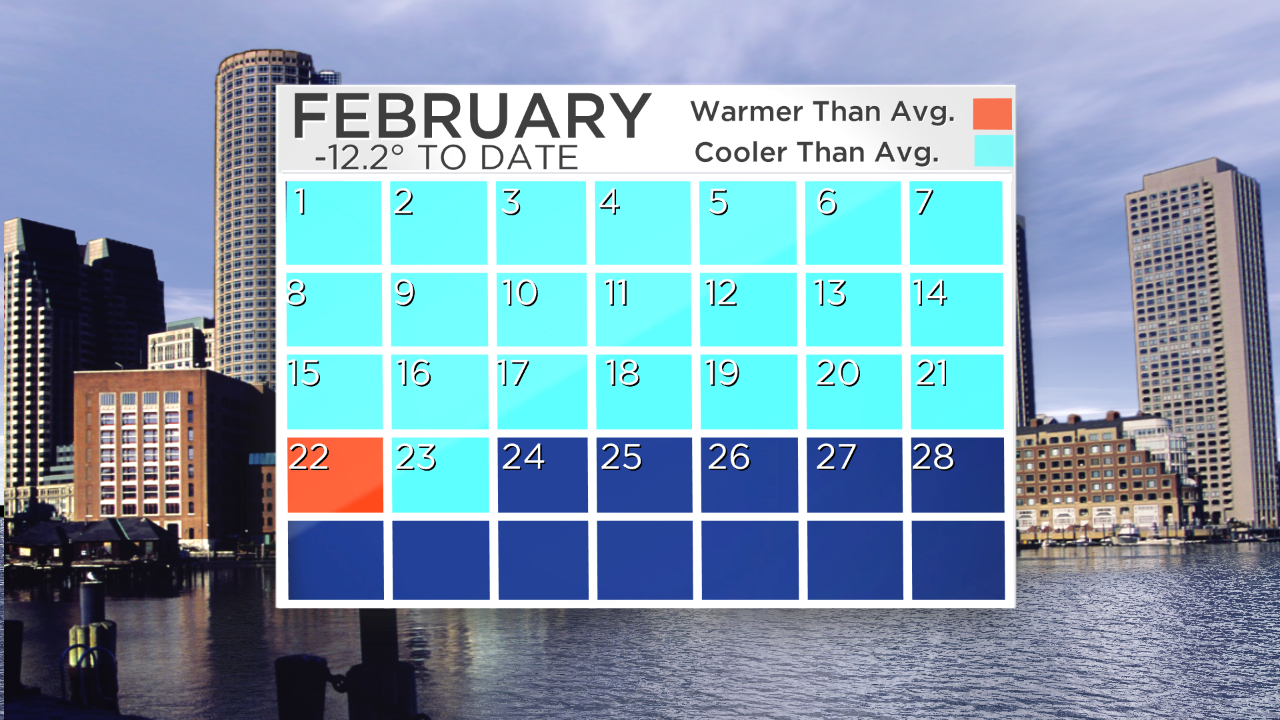 Let's start off with something that drove me crazy over the weekend - we had an above average day of temperatures. Am I insane? Yes. But - if you're passionate about weather and odd/rare events - you'd feel the same way. Sunday was ONE stinkin' degree above average for the date, and in doing so will be the only day above average for the entire month. Now it just looks like a stain on an otherwise perfect month of extreme cold. Did I enjoy it? Yes of course. But you have to admit that seeing an entire month of cold would have looked a lot more impressive. 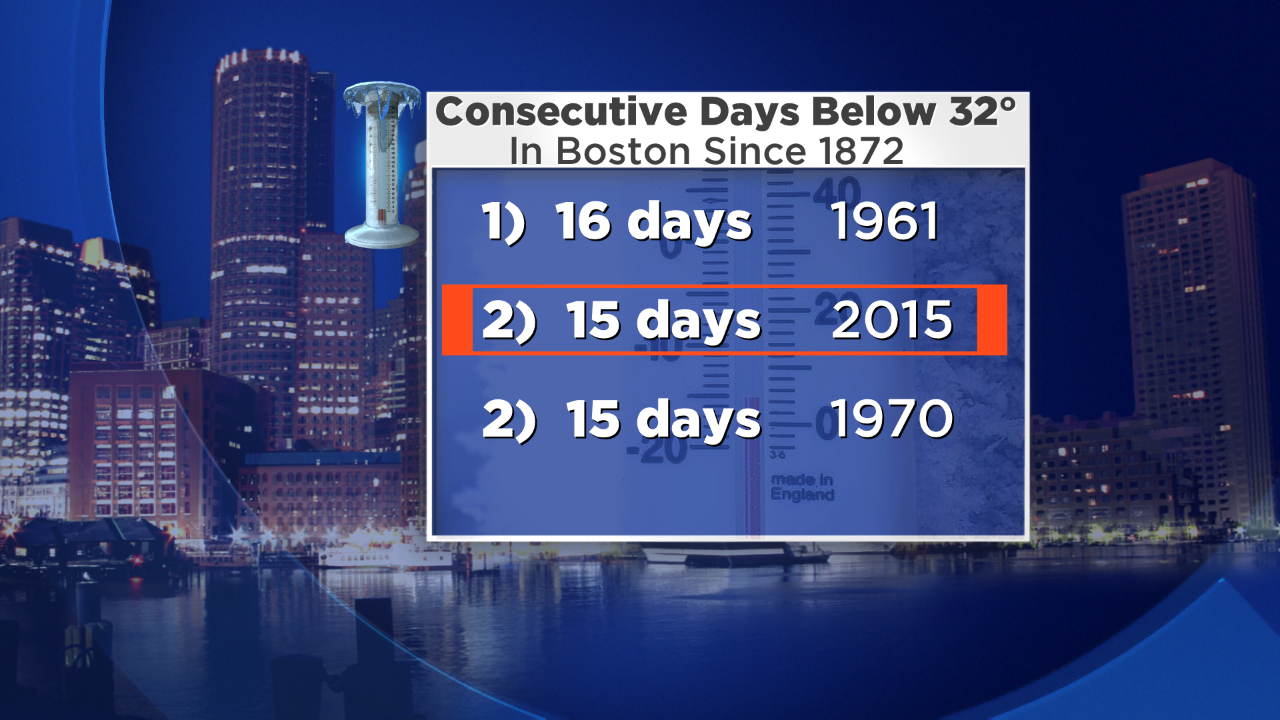 Be that as it may, we're still accomplishing some major feats. We saw the 2nd longest streak of subfreezing days ever recorded in Boston (15). Not too shabby, but it ended on Saturday. Never fear, we are going to flat out break a record today (Tuesday). It'll be the 19th day without hitting the freezing mark this month - the most ever recorded for a February. Previously that record had been set allllll the way back in 1885. We should add at least 3 more before February comes to a close. 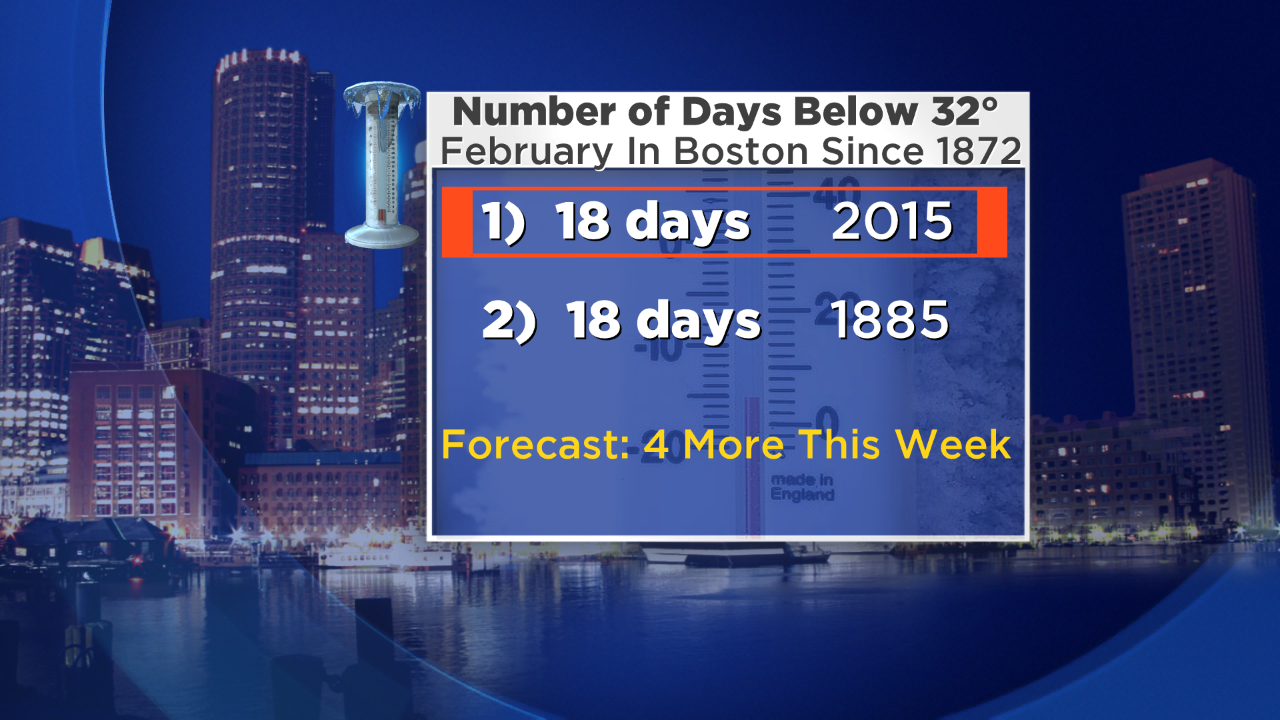 How about days below 40F? As delightful as Sunday felt, most still didn't reach that mark. You have to go all the way back to January 19th to have experienced weather so tropical. So if you're counting at home, today makes 36 in a row. Considering we will not hit 40 anytime soon (*maybe* a chance on Monday...low chance for now)...that record is easily going down.

Then there's the big picture - how about the month as a whole? As mentioned on the blog before - February of 1934 is the gold standard for cold. It was a miserable month, and the only one ever recorded in Boston since 1872 to have an average temp in the 10s. Well folks, we've got a shot. All four Southern New England climate sites are either in the lead or in range going into this home stretch. Our current forecast is for Tuesday through Saturday to all be 15-25º below average. So each one of these values should hold steady or tick down a bit more. Boston may not quite get there, but the other sites should become new champions and examples of how cold it can possibly get in this part of the world. And for Boston, it would at least be the coldest month since the observation site moved to Logan (a warmer spot) in 1936. 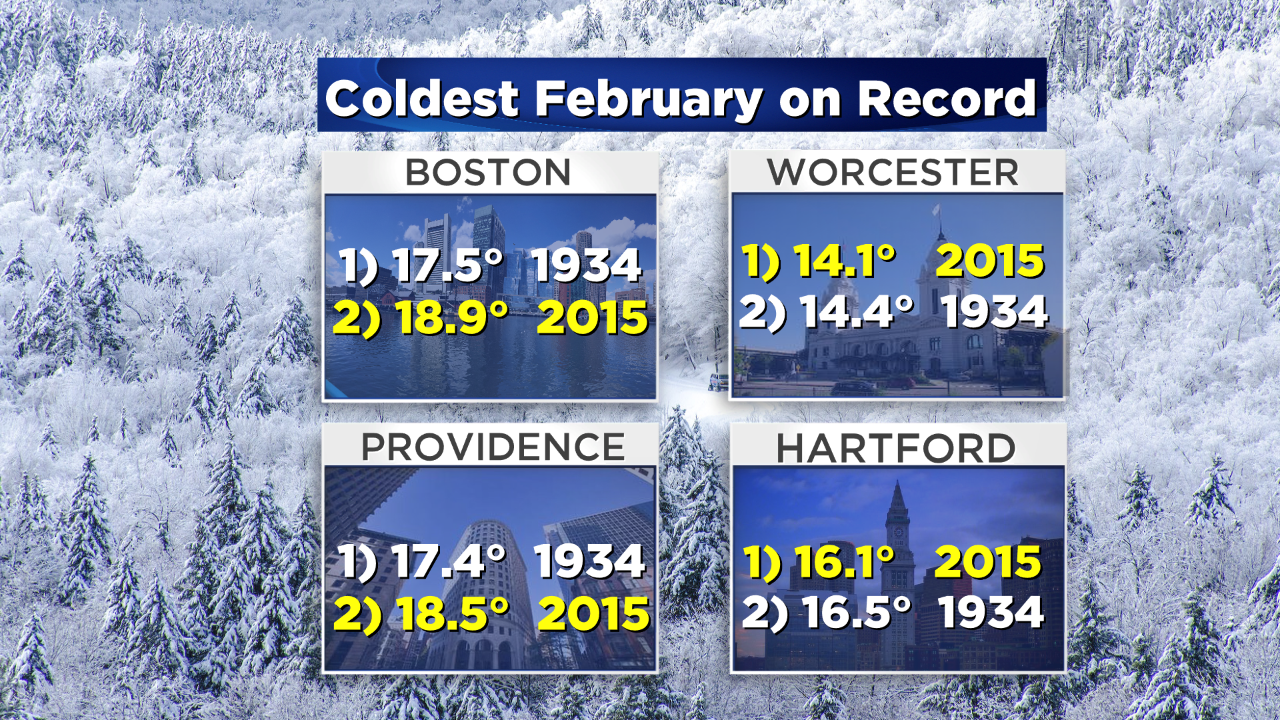 Impressive as that is, we're not even the coldest versus average in New England! The stats in Bangor, ME are truly astounding. Not only are they going to record their coldest month ever noted in the books, but they'll absolutely obliterate the previous record by 2º. That's good for all-time cold, but for good measure it also puts a complete beat down on the previous coldest February ever recorded by 5º. 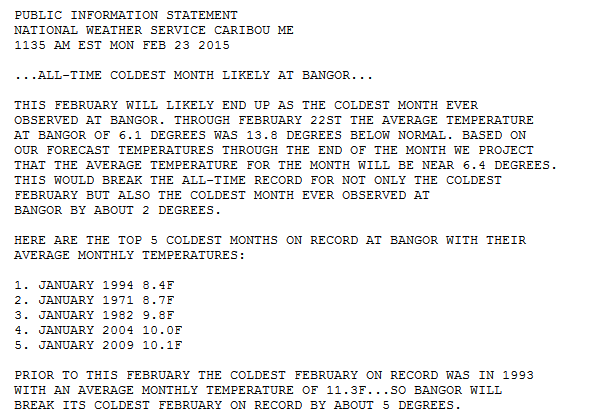 Statement via the National Weather Service in Caribou, ME

In Vermont, it's the same story. Burlington is running more than -13º below average to date. It's looking like the city should finish with its 3rd coldest month ever recorded, and Montpelier may be able to grab the top spot. Rivers are frozen solid, and you can bet that the ice jam season is going to be a mess for much of the region. And if you look at the overall picture for this part of the globe - it's easy to spot that we have the un-enjoyable distinction of being the coldest area vs. average for all of the CONUS and Canada. 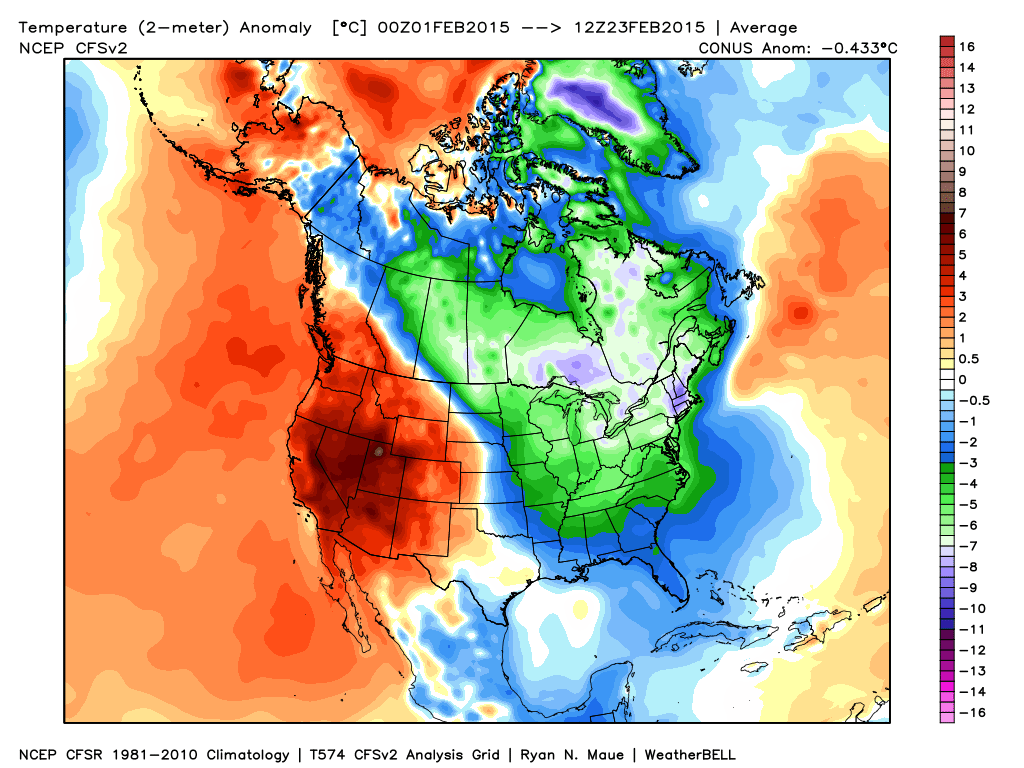 North American temperature anomalies for the month of February to date. Note that little blob of purple over us. We're the coldest relative to average on the map, outside of Greenland! You want exceptional cold, this is the place to be. Source: Weatherbell

What does it mean for March? Well a combo of looking at past events and some longer range model projections suggest we're staying in the freezer for at least a little while yet. In all of the Top 5 coldest February's on record (and now the Top 6)...the following March was also below average. The latest models say we're staying cold through at least the first half of the month, which looks highly probable considering there's not much of a pattern shift being indicated and we still have several feet of snow outside. But there's a silver lining here - at least the averages are moving up in March! Plus we'll have a lot more daylight, and the sun starts to feel much stronger. I feel that once we turn the calendar over and get past this incredible February, spirits will lift regardless of our frigid prognostications. 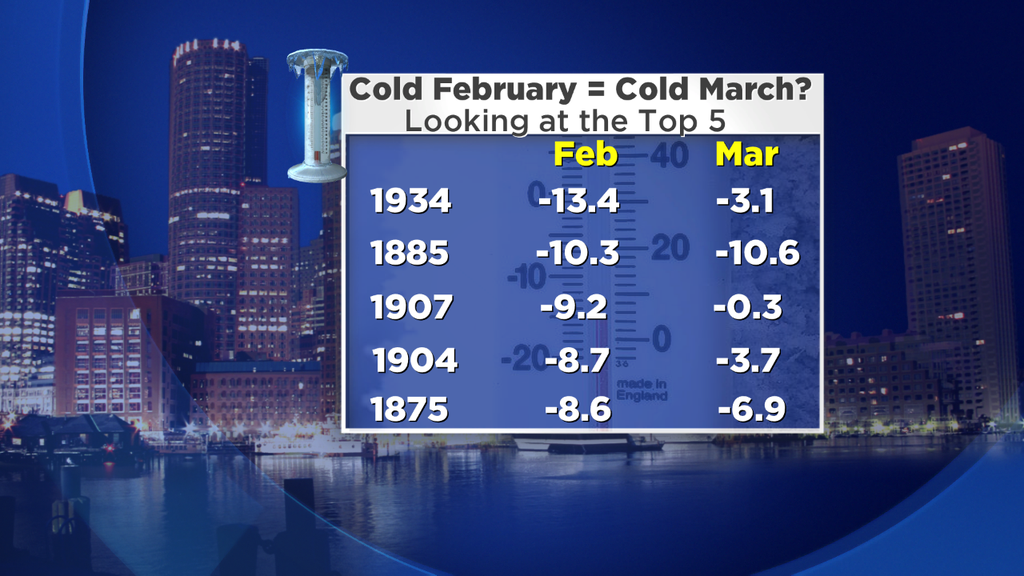