Will new "points of emphasis," which may limit how defensive backs defend receivers, affect the physical Seahawks? Check back at midseason for an answer. For now, there's no reason to think the Seahawks, last seen stifling Peyton Manning and the Broncos in Super Bowl XLVIII, will surrender the top spot.

1. Seattle Seahawks
2013 Stats: 14.4 PPG, 28 interceptions, 4 TD
Seattle was tops in many of the important defensive categories last season: notably points and yards allowed. They benefitted from a league-high 28 interceptions, but there's no reason to think they can't put up similar numbers in 2014. The Legion of Boom is simply too physical and talented for most teams.

2. San Francisco 49ers
2013 Stats: 17 PPG, 18 interceptions, 5 TD
Seattle's NFC West rival checks in at No. 2, though there's a significant gap between the Niners and the defending Super Bowl champs. Injuries (linebacker NaVorro Bowman won't return until midseason), suspensions (Aldon Smith), and free agency lower the ceiling for this unit, which has some worthy competition at its heels.

3. Carolina Panthers
2013 Stats: 15.1 PPG, 20 interceptions, 4 TD
The Defensive Player of the Year is starting to become more of a household name. Luke Kuechly, who will be featured in the Sunday Night Football weekly promo and stars in a Madden '15 commercial, leads a dominant group.

4. Arizona Cardinals
2013 Stats: 20.2 PPG, 20 interceptions, 5 TD
Three NFC West teams in the top four? Why not? The Cards stuff the run and have a superb secondary (20 picks last year). And if your league counts special teams touchdowns, Arizona has even more value. 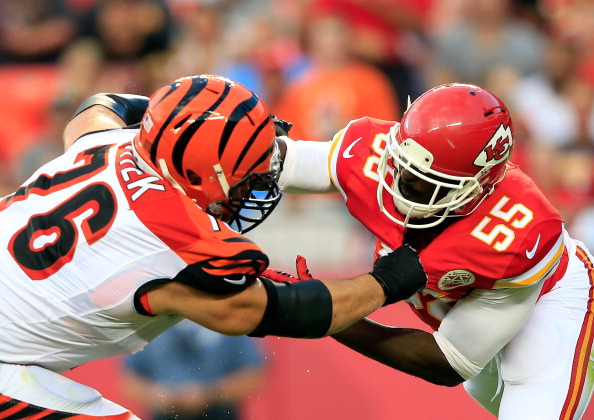 Dee Ford #55 of the Kansas City Chiefs is blocked by David King #76 of the Cincinnati Bengals defends during the preseason game at Arrowhead Stadium on August 7, 2014 in Kansas City, Missouri. (Photo by Jamie Squire/Getty Images)

7. Kansas City Chiefs
2013 Stats: 19.1 PPG, 21 interceptions, 7 TD
The Chiefs recovered more than their fair share of fumbles last year and of course have to play the Broncos twice, but they used their first-round pick on defensive end Dee Ford out of Auburn. KC finished third in fantasy points last season.

9. Buffalo Bills
2013 Stats: 24.2 PPG, 23 interceptions, 3 TD
The Bills were partly unlucky last year, as their fumble recovery rate was very low, yet they still were near the top of the league in takeaways.

10. New England Patriots
2013 Stats: 21.1 PPG, 17 interceptions, 3 TD
Darrelle Revis joins the Pats' secondary, as does former Seahawk Brandon Browner. These new additions won't help much against the run, however, and New England was fifth worst in the NFL in that category last season.