The #1 email I've been receiving from viewers lately is "What's up with the drought? Are we done yet?" It's an interesting topic to tackle because there are differences between short-term and long-term drought, and what a drought actually means for us in New England. Long story - there are still some big deficits across the area. Short story - it's most definitely not dry out there and we're going to continue to get soaked this week. Let's dig into the details. 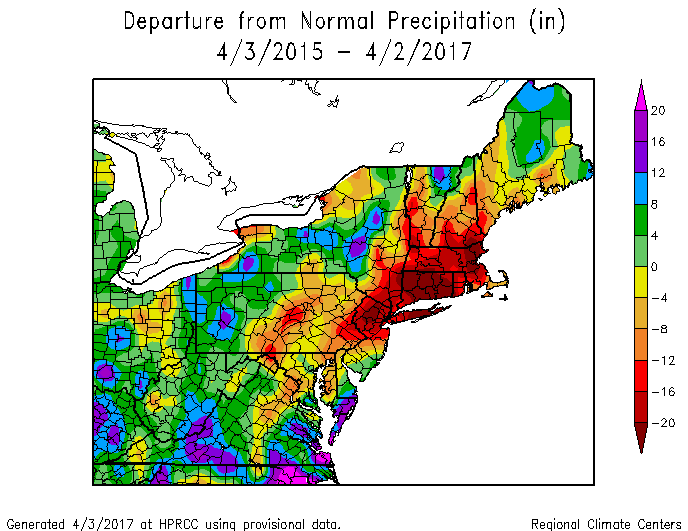 Precipitation departure from average over the past 2 years. Source: NRCC

Looking back over the last couple years, the big picture says it's been very dry. Parts of southern New England are running 20-30" rainfall deficits over this time, which is a gigantic number. And if you're not a numbers person  you don't have to ask a stat geek like me. You just had to take a look around. We had a tremendous number of trees and shrubs die off last year, and it was very noticeable by autumn. Reservoirs were extremely low and numerous water restrictions were in place. We had the worst gypsy moth caterpillar outbreak since the 80s due to the very dry spring. There even were reports of some wells starting to go dry, especially toward southern New Hampshire and Maine. That's pretty legitimate drought by New England standards and the worst we've seen locally since the 60s.

This winter was decent, but not great for drought overall. Boston saw at or below average precipitation for most of the cold season months. But we were close enough during a time of low evaporation and low usage to start making up ground. People began to notice ponds filling and reservoirs appearing to be in better shape. Though photos from places like the Quabbin still showed a lot of exposed shoreline and low water. 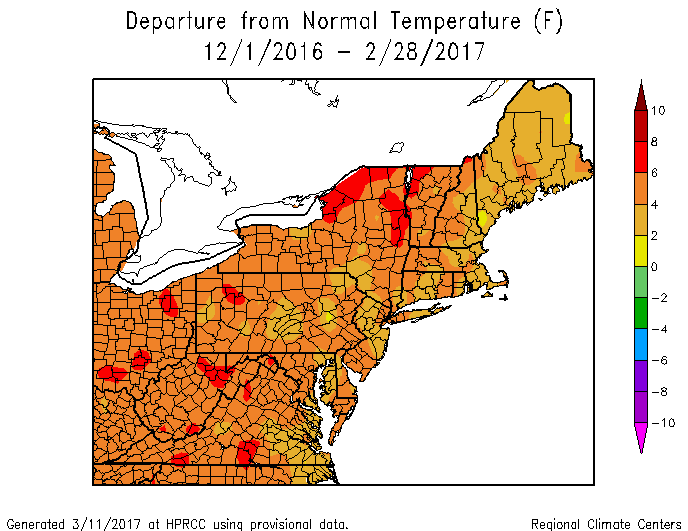 Temperature departures from average for the winter season (December through January). It was the 5th warmest on record for Boston. Source: NRCC

That brings us up to current times. The snowy/slushy/rainy mess of last Friday and Saturday dumped a prodigious amount of...stuff from the sky. No matter what fell over your town, there was a lot of it. All told, the liquid equivalent was 2-4" across the region. Some saw nearly a month's worth of rain in 36 hours! A few even reported the sump pumps starting up in their basements. A sure sign of spring, no doubt. 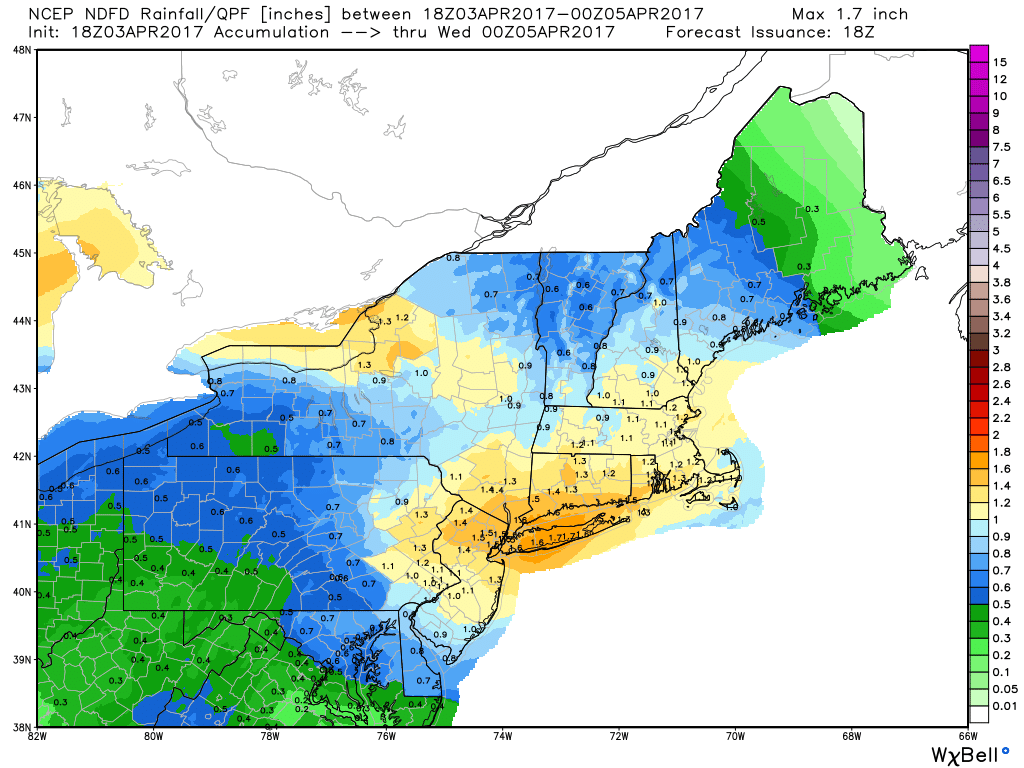 General idea of expected rainfall amounts on Tuesday (note that some of this fall as snow across northern New England, in particular Maine). Source: Weatherbell

Now we have two more storms on the way in. The first is just barely warm enough to be rain instead of snow, to the relief of many who are ready to turn the seasonal page. Tuesday should bring a widespread 0.5" to 1.5" of rain, with some local totals up to 2". Combined with the storm a couple days ago, this should produce a few areas of flooding and lots of standing water. Smaller streams/rivers react to rainfall quickest, so expect to see some of them really raging by Tuesday afternoon and a couple even flooding out the usual prone areas. Widespread issues are not anticipated with this round.

The next storm arrives on Thursday with minimal to zero sunshine in between to help dry things out, and this follow-up storm is a more potent one. Another 1-2" of rain looks likely, and if things come together just right we may even see a few towns top 2" of rainfall. There's a pretty good slug of moisture that will be drawn into this storm from the tropics, allowing for heavy downpours and even some thunder possible. The heaviest overall looks to arrive Thursday afternoon and last into the first half of the night. 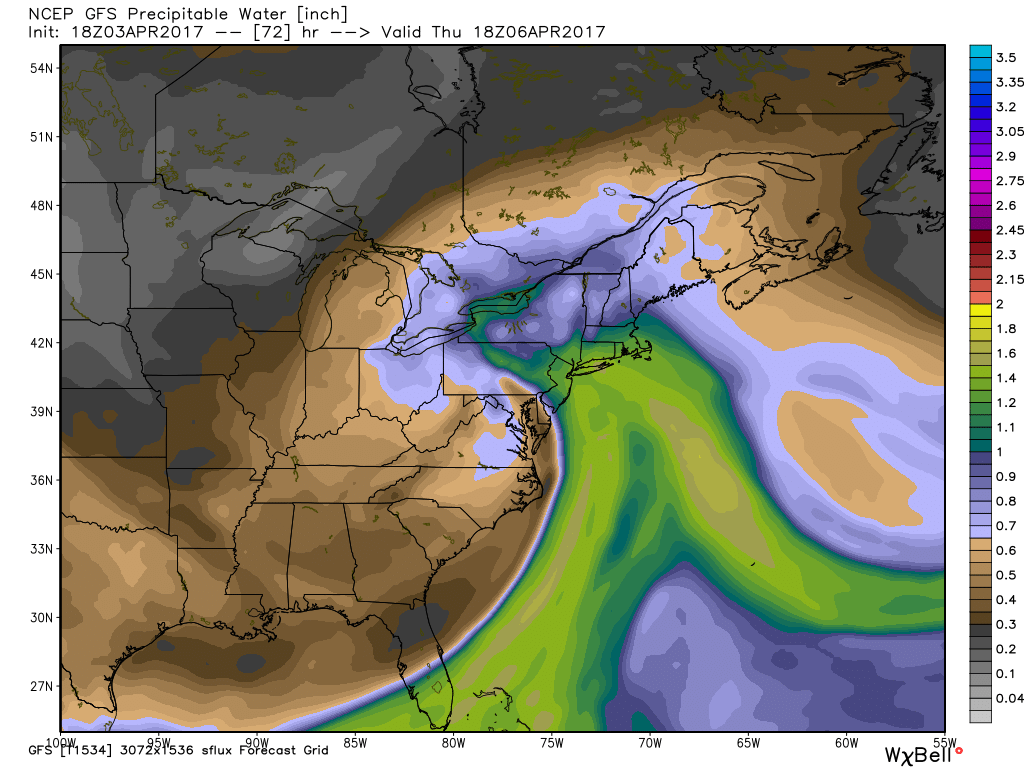 Considering how wet the ground will already be, there will be a larger opportunity for river and basement flooding Thursday into Friday. If your basement usually floods, it would be a good idea to keep an eye on it. At the very least, a lot of standing water in low-lying areas is a solid bet. If all this comes together, then some towns would be picking up 5-8" of rainfall in a week! Put that into context - it took Boston ALL of May, June, July, August, and September last year to get 8" of rain. So it hasn't been this wet in quite some time. 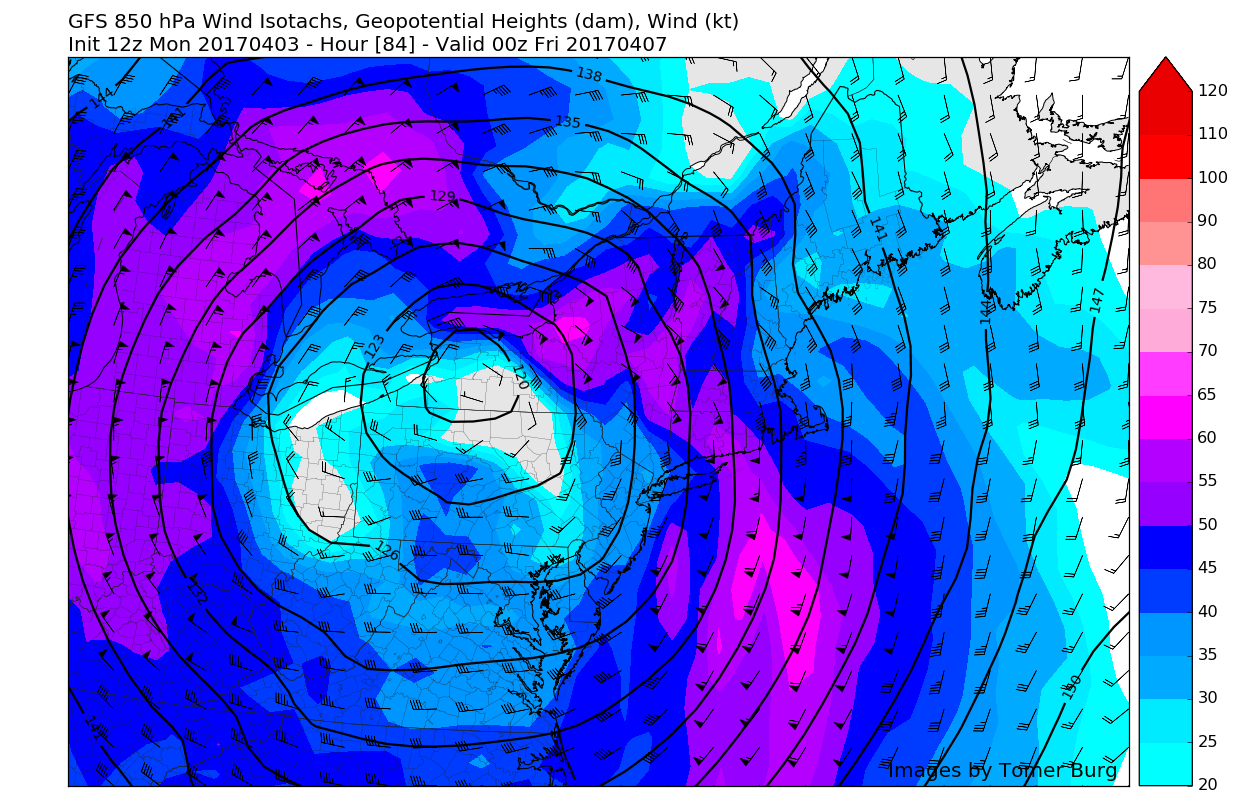 Strong winds will be a feature of the Thursday storm as a low-level jet intensifies. Only question is how much of it mixes down to the surface.

Strong winds will be possible with this Thursday PM storm, and with a soaked ground that could bring some trees down. That will be another aspect to keep close tabs on. Gusts over 30mph are very likely, but we may see some over 50mph if parts of the low-level jet mix down to the surface.

Then there's the story of snow melt, of which there will actually be one this year! Last year there was pretty much nothing to melt during the spring. The year before that, most of the snowstorms impacted only far eastern New England. So there's a good chance rivers will run more full this spring than we have seen in years. In fact, flooding is likely going to be an issue in the short-term with all the rainfall coming this week and snowmelt taking place. Fortunately it's at least a cold rain for both of these systems. But the combined runoff is going to cause some problems and you'll definitely notice more swollen rivers than we've had in quite a while. 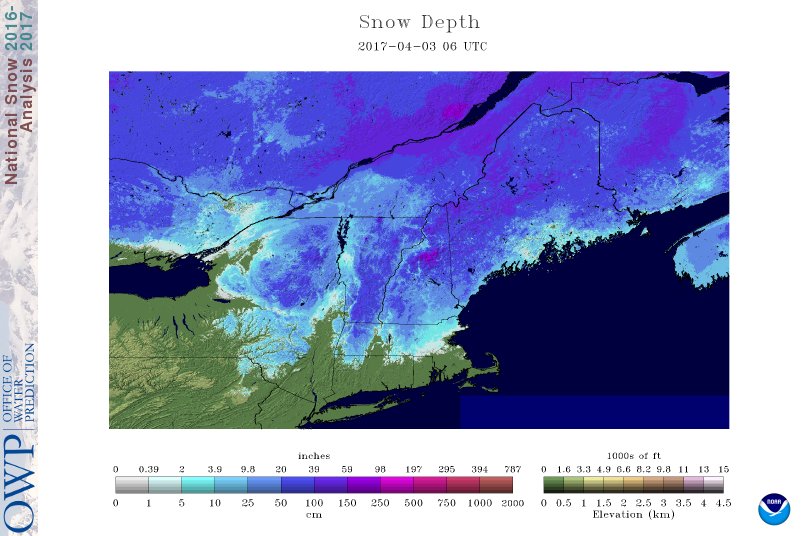 So what's the end game of all this? Yes, you're still going to see some 'drought' categories and colors assigned on the drought monitor the next couple weeks, and probably even beyond. That's the long view. It takes into account the deficits that will still exist built up over time.

But is it dry? No. Will we have drought issues this spring? Highly unlikely. This stormy stretch will put us in great shape and really fill up the lakes and ponds. The water table is getting a good recharge, and so long as we don't completely shut the tap off in May we'll be well equipped to green up this spring!