Anyone who knows me or follows the blog posts knows I'm not much for sensational weather coverage. Everything is *not* the worst ever, craziest ever, unprecedented, etc. like the internet often makes it out to be. But I have to admit - our current drought is definitely reaching concerning levels in my book. We're starting to get more reports of well pressure starting to decrease, retention ponds going dry, water restrictions tightening, etc. A $1 million Drought Emergency Fund has been allocated for farmers. Worcester is banning a variety of water-related activities. No doubt we've had similar dry spells in the past. But this one is right up there with some of the worst, and the worrying part of it is that there really doesn't seem to be any change remotely in sight. September is typically an extremely dry and quiet month for us - and this year's will be warmer than average to boot. There's a good chance we may go another month before the autumn gales hopefully start to provide some relief. 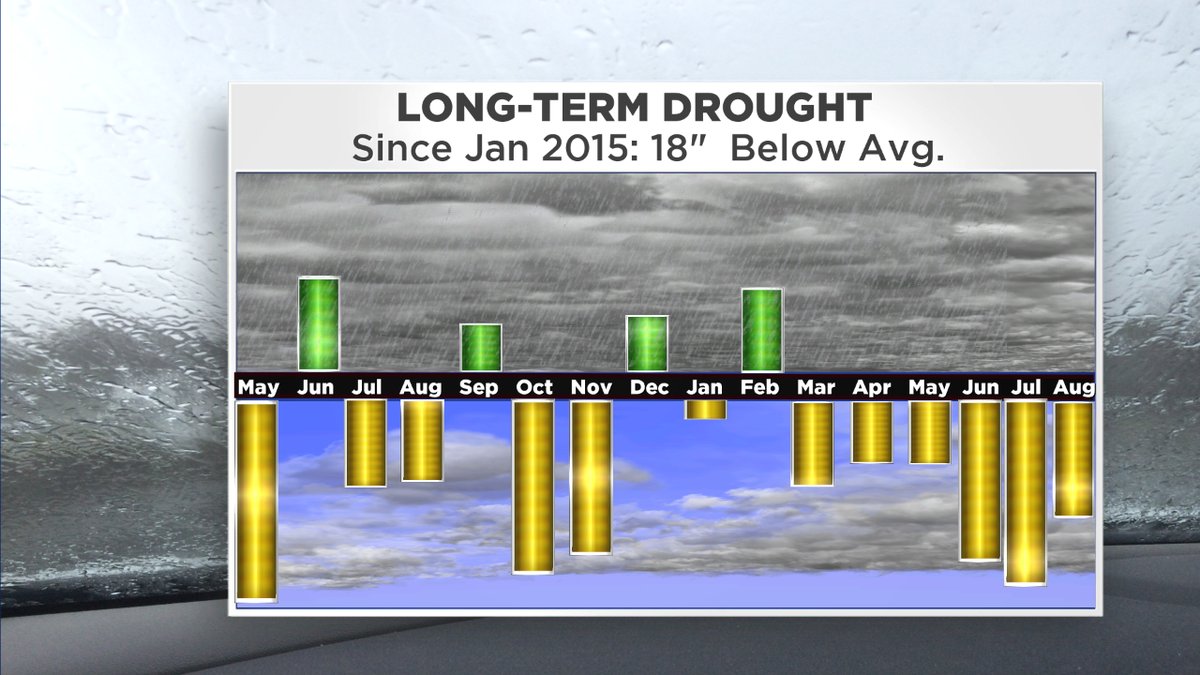 As we've covered before in previous posts, this issue isn't just this year. It's a long-term problem dating back to the start of 2015. Nearly every month has seen below average precipitation since that time, leading to a pretty remarkable deficit. In Boston, we're down 18" since January 2015. Keep in mind a typical year brings about 43" of rain. That's a huge chunk of missing moisture and it's going to take a long time to build up the depleted water table, lakes, reservoirs, etc. You can't fill them back up with scattered showers and storms. We need a wholesale pattern change to storm parade mode. 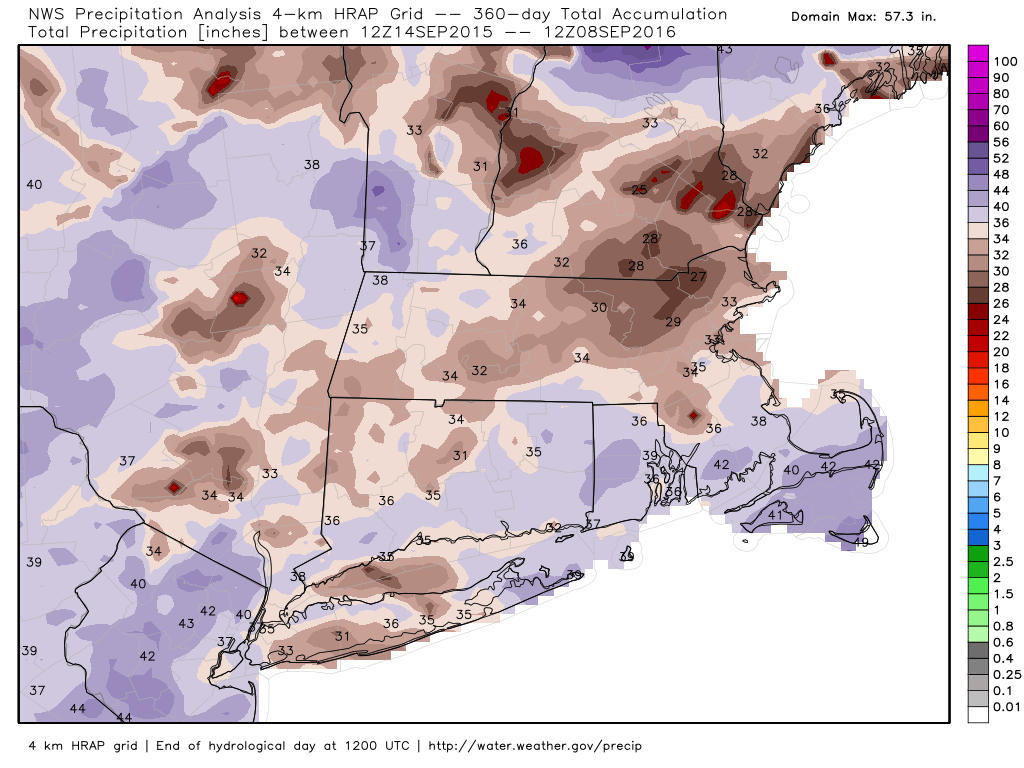 Looking back over the past 365 days, it's interesting how large rainfall differences can be over such a small area. The Cape & Islands have seen nearly 20" more rain in that short time, compared to southeastern New Hampshire/northeastern Massachusetts! That's why their groundwater is still doing O.K., even though many plants have dried up in a hot and dry summer. A good chunk of this rainfall fell pre-growing season, with the valve shutting off in April. 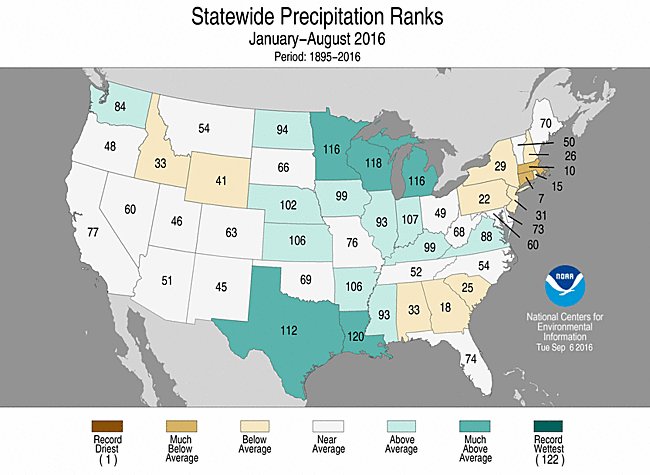 For just this year, we don't rank as the driest. Actually, it's been the 10th driest Jan-Aug on record in the Bay State, 7th driest in Connecticut, 15th driest in Rhode Island, and 26th driest in New Hampshire. What we're seeing now is more the cumulative effect over a couple of years. Landscapers are going to be very busy next year replacing dead trees, shrubs, and plants that just couldn't take the combo of little rain and low water tables. And the interesting thing is how hyper-local this has been. Areas in the Midwest and Mid-Atlantic have been soaked this year. Even northern New England has been fine for rainfall (aside from coastal Maine). Southern New England to western New  York is the band of land that just can't buy a drop. Some of this has been a dry pattern, some of it has just been poor timing. Case in point this Thursday. Decent front runs into warm and humid air, but arrives in the middle of the night. Not enough instability to generate good rain. This coming weekend we'll get another such front on Sunday. Arrives early morning, away from peak heating, and that puts a lid on widespread storm development. That's happened over and over again this year. Next Wednesday yet another strong front will approach, but it looks to run into dry air that will produce lackluster shower/storm activity. 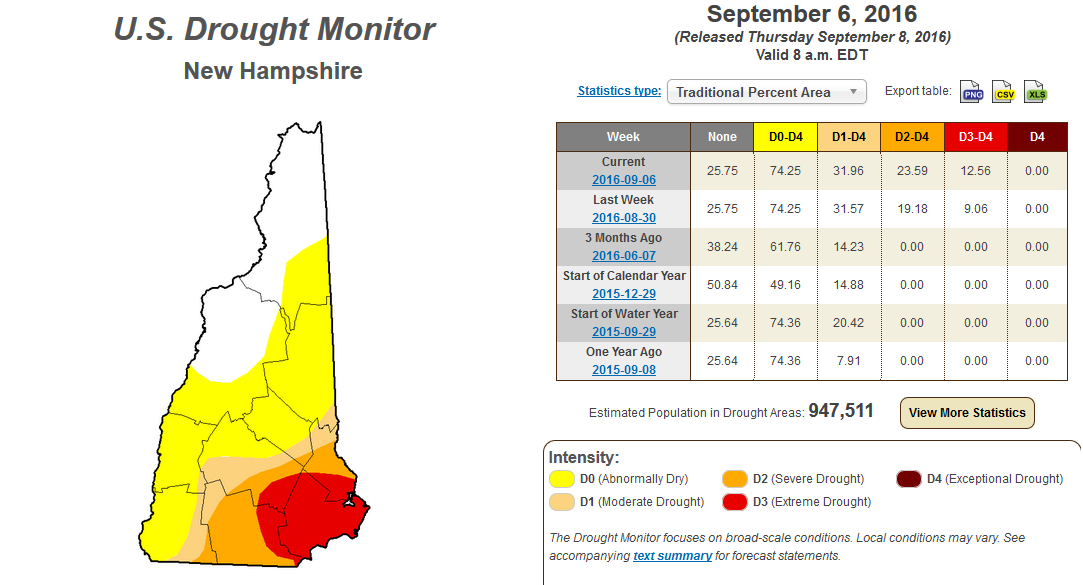 Looking ahead to the rest of the month, I don't foresee a lot of change. In fact, it just looks a lot like 'September.' Our fronts will get progressively stronger and deliver good air mass changes, but that's just a couple showers here and there with otherwise sunny and warm air between the fronts. The outlook is for generally above to well above average temperatures into October. There aren't any tropical threats lurking. There are no nor'easters showing up in the long range. So the drought will continue to deepen.

What can you do? Be smart about water use. Conservation can help go a long way...limiting watering in the  yard, washing the car, or avoiding the long showers for a while. The good news is that we're just about out of vacation season and the growing season only has about a month left. Seasonal visitors will leave, taking some stress off water supplies. Irrigation will end as the harvest winds down. Heck, people even shower less when the hot and humid air departs. This may slow down the impacts of the drought as the usual storm season  begins. As much as it pains some winter haters, we need this winter to be a doozy. And not like in 2014-15. Sure we stacked up a ton of snow, but it was all 'dry' snow with low water content. We need a mix of wet and snowy storms, and a whole lot of them, to replenish what these past couple of years have brought. Even a modest snow year (say 40-65" across the area) would be fine so long as it had a good water content. All New England droughts end eventually...for us the question is just when the turnaround begins.