Rinse, wash, repeat. If this week's weather feels oddly familiar, it's not just you. We're essentially going to see the same exact storm that came through the area last week. One that starts wintry and ends with spring temps and heavy rain. These are always a little trickier to explain because they're drawn out over time and have multiple moving parts, so I'll break it down into different phases.

First, the setup. The whole mess originates along the Gulf Coast. In fact, a dangerous severe weather outbreak leads the way Tuesday as strong energy digs deep down into the southern states. Numerous tornadoes and damaging wind gusts are expected Tuesday into Wednesday, and plenty of Gulf moisture will get wrapped into this system. 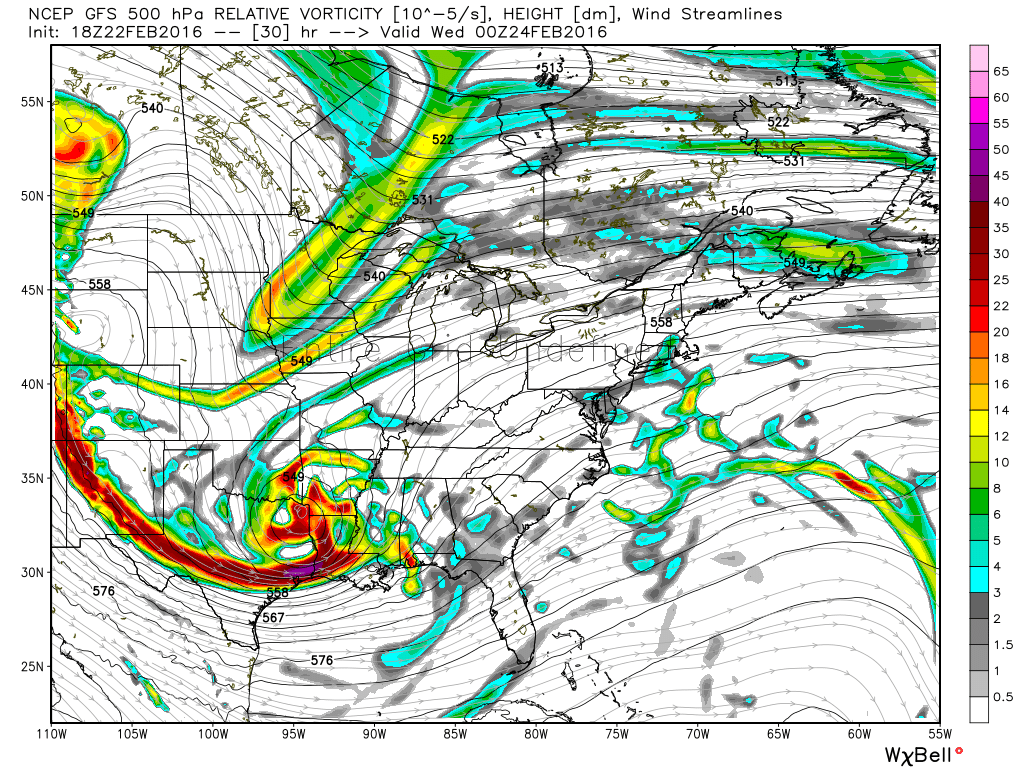 A strong disturbance digs into the south on Tuesday with a signal for severe weather across the Gulf Coast. Source: Weatherbell

There isn't a whole lot of cold around these parts, but just enough to keep wintry weather in play. The storminess to our south will come at us in two waves, and the first one is the wintry one. A weaker wave of low pressure will slide off to our southeast, and that movement is important. The track will allow for northeast winds to stay intact into Wednesday, which in turn keeps the (admittedly meager) cold in place across much of the area. So like I often preach on the blog...cold is the bully! It will take quite a long time for warmer air to take over, and I don't expect many areas west of 128 to climb out of the 30s until Wednesday night. This also means that snow/ice won't be washed away quickly...it'll stay slick well into Wednesday. 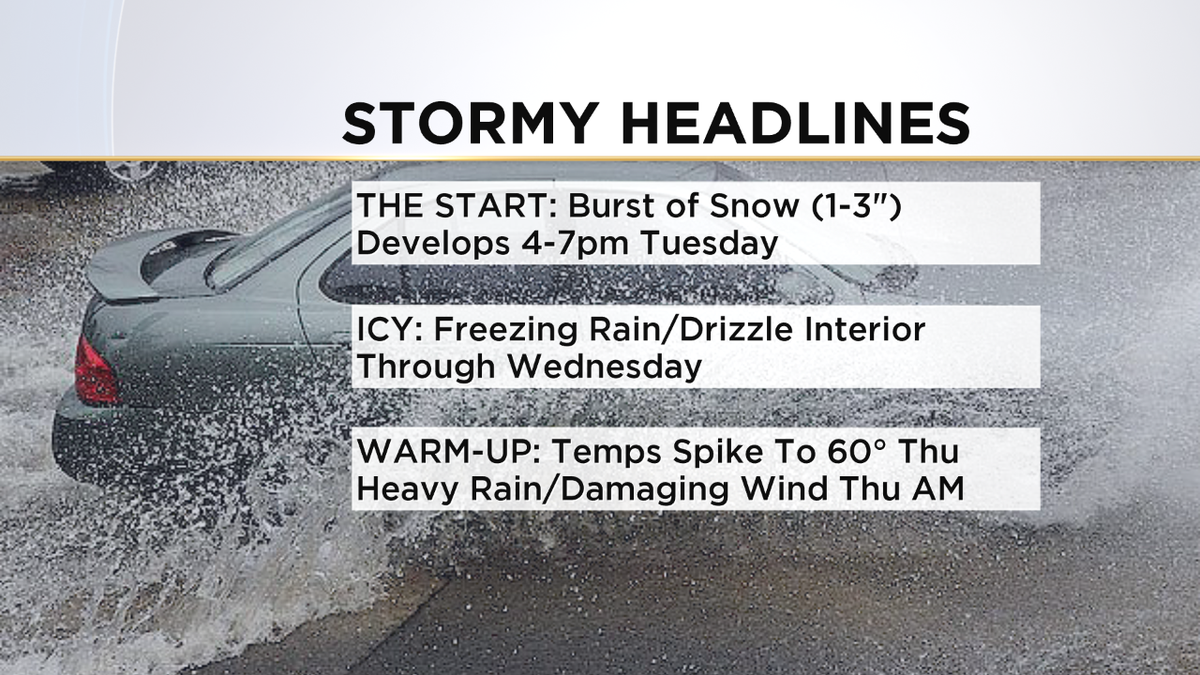 Phase 1: A Burst of Snow

A chilly day in the 30s with thickening clouds will give way to snow between 4 and 7pm from south to north across the area. The highest impact when it comes to the evening commute looks to be along and south of the Pike. Now there is one difference between this setup and last week's that sticks out to me, and it's important for Tuesday night. Last week we had record cold in place and roads/other surfaces were all extremely cold when the storm moved in. This made for A) even more stubborn cold than usual and B) instant freezing on surfaces as snow/rain came down. In this scenario, it's been quite mild and roads etc are not as cold. So the bottom line is that so long as they're treated, driving should be O.K. Travel with caution but it shouldn't go to instant ice rink like we saw last time around. 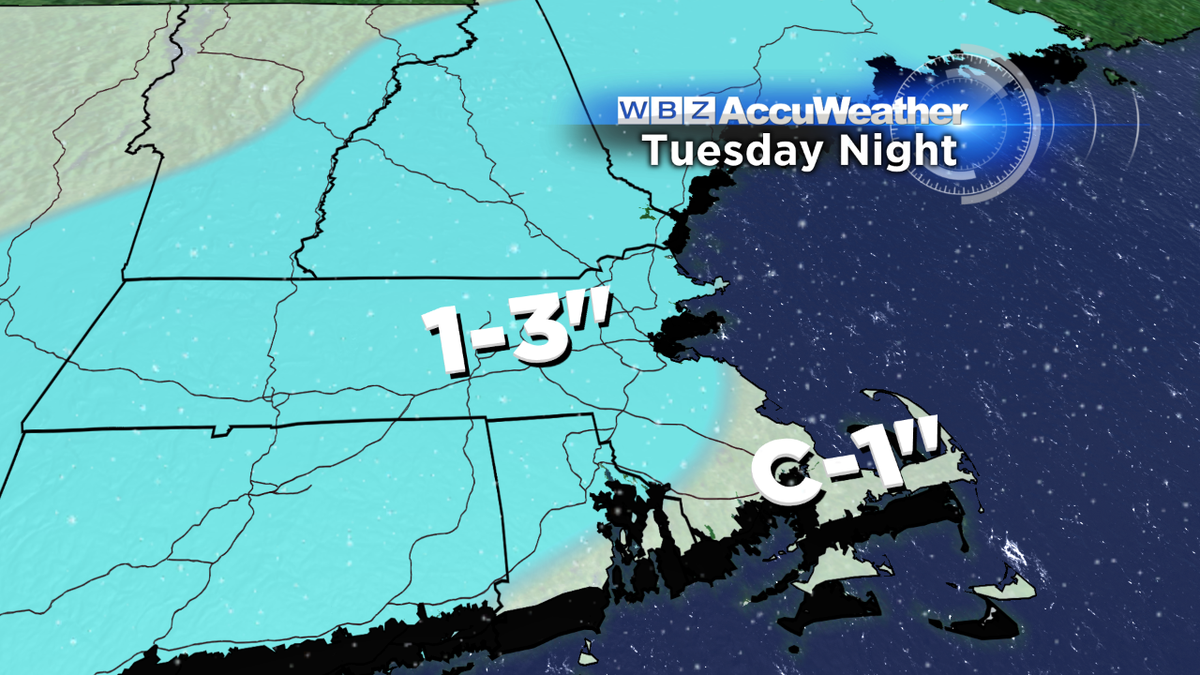 Most should get a coating to 2" of snow, but some localized totals up to 3" are possible.

Snow will hang on until about midnight for most, but then warmer air aloft will move in and cut off the snow. At that point, it's freezing rain/drizzle.

I mentioned how stubborn cold air can be...and that's what we'll be keeping tabs on during Wednesday. I think much of the interior will be freezing and icy Wednesday morning, with some holdouts going all the way into the late afternoon before succumbing to warmth. Periods of freezing drizzle/rain will continue, generally light. Amounts should be less than 0.25" and so power outages aren't expected to be a big concern. 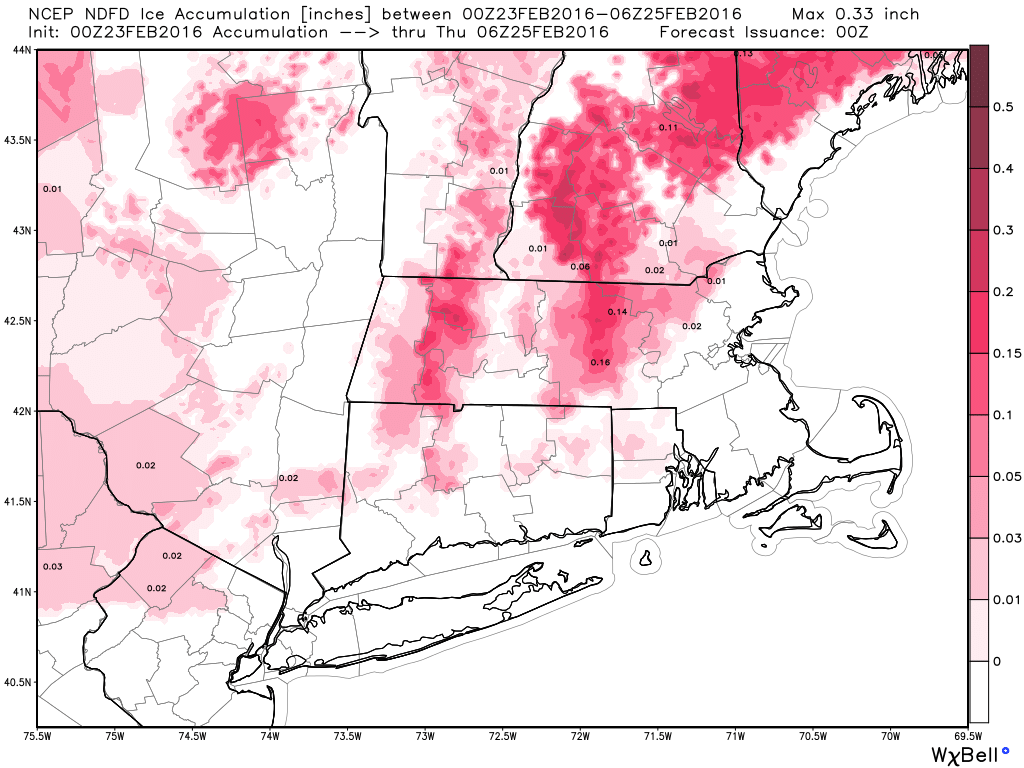 Current ice forecast from NWS Taunton. I think some isolated totals Tuesday night through Wednesday up to 0.25" are possible. Source: Weatherbell

For those along the immediate coast or in SE Mass, icy conditions won't be a large issue. Temps will manage to stay a bit above freezing, with some 40s toward the Cape/Islands. A raw and chilly day but without major travel concerns. 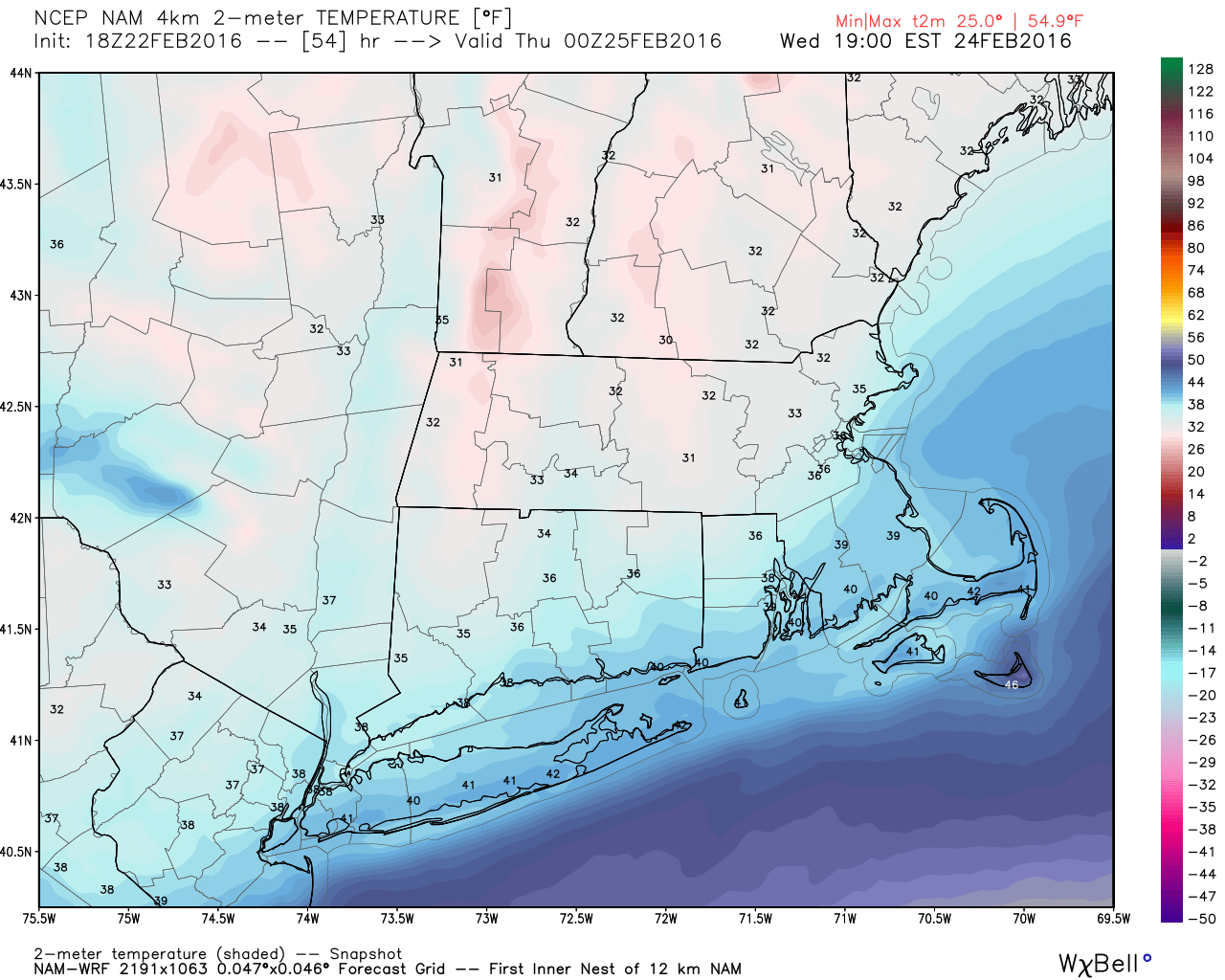 I think the 4km NAM is doing a good job of showing the persistent cold air across the region. This is a look at the guidance for Wednesday evening. Lots of 30s still in place as NE winds help lock in the chill until late Wednesday evening/night. Source: Weatherbell

Finally, on Wednesday evening, the warm front will start making progress and temps will climb all night long. By daybreak, most will be in the 50s if not low 60s!

Wednesday night is when the heavy rainfall moves in, with a widespread 1-2" through Thursday morning. It's still a bit early to tell if the heaviest rain will still be around for Thursday morning's commute, but at this time it looks like it will. Heavy rain could lead to some street flooding, and even some minor river flooding if we end up with localized 1.5-2.5" rain totals. 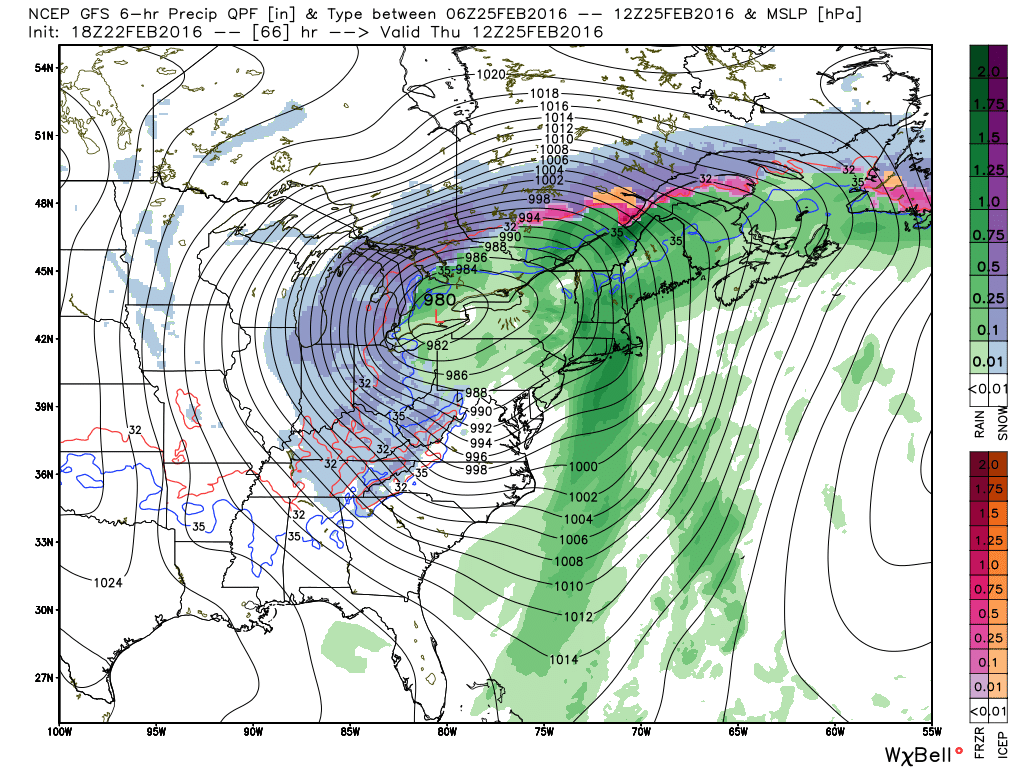 Look familiar? Same storm as last week. Rain all the way up into Canada. Could even see severe thunderstorms as far north as D.C. on Wednesday. Source: Weatherbell

And just like last week, strong winds will accompany the heavy rainfall. Another powerful low-level jet will develop and some (not all) of that will mix down in these downpours. Gusts 40-60mph out of the south are expected, with another round of sct'd power outages and downed limbs/trees possible. 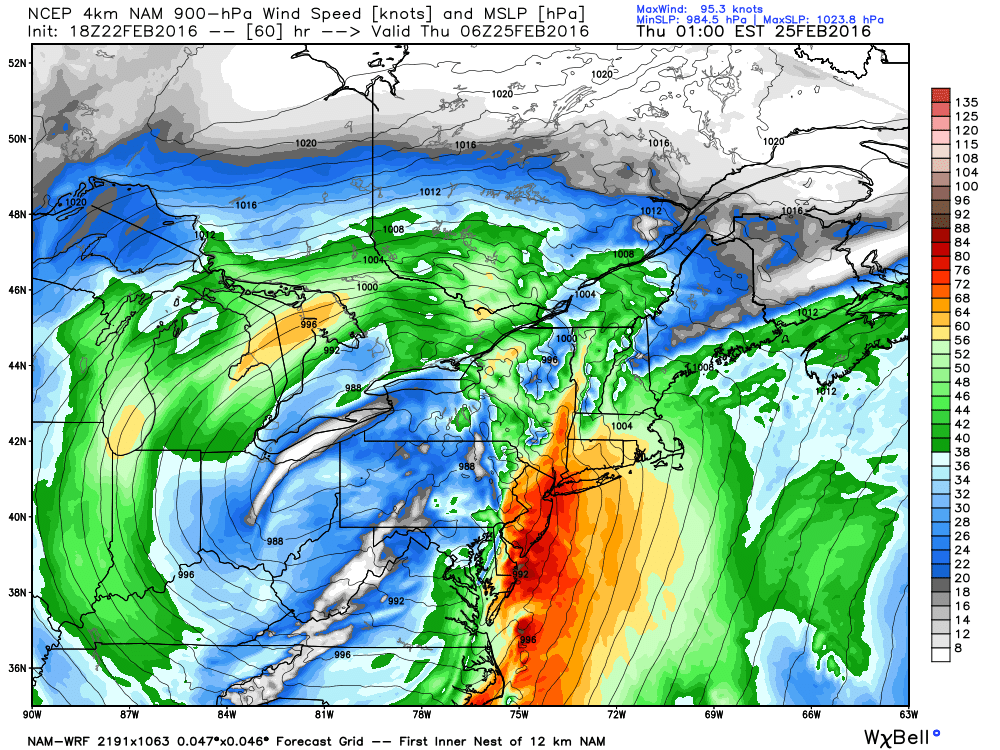 The low-level jet will be increasing Wednesday night, peaking early Thursday morning. This is when we'll see scattered damaging gusts mixing down to the surface. Source: Weatherbell

These strong southerly winds will get us somewhat close to record highs, but not all the way there. I think our records in Worcester and Boston (64F and 65F respectively) are safe on Thursday. But it will definitely be MUCH warmer than average yet again.

Behind the storm is some colder air for Friday, with highs stuck in the 30s to near 40 and gusty northwest winds. But The big cold stays well to our north, and temps are expected to top out near 40 this weekend. Not as warm as last but not really 'cold' for late February. We may be right back into the 50s on Monday as yet another storm pulls up to our west and brings in southwesterly winds. Amazingly, we have had 31 days above 50 degrees in Boston so far this (Meteorological) Winter. We will add 2, if not 3 more before the season officially wraps up Monday night. 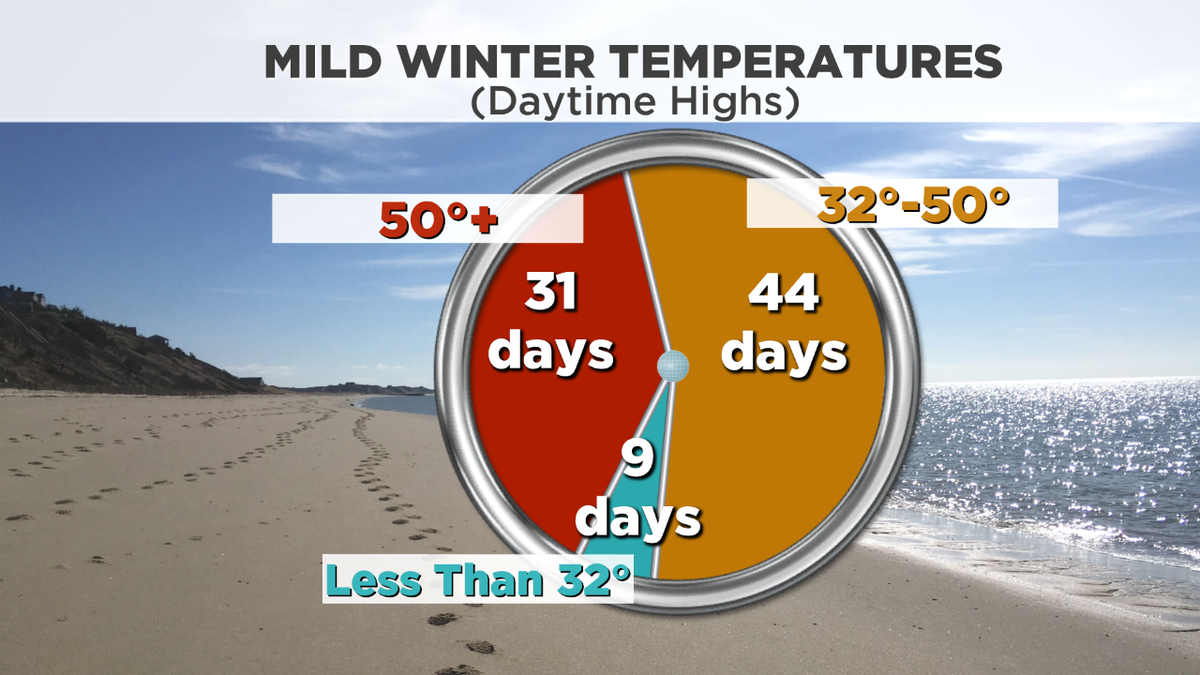