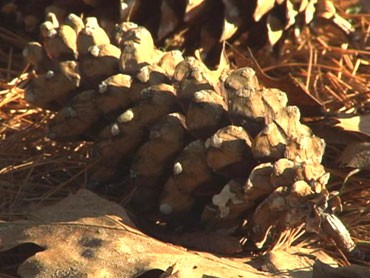 Normally this time of year, you might have snow covering your yard, but if you have a pine tree or two, chances are you have a slew of pine cones blanketing the ground.

That spurred Maggie in Chelmsford to Declare her Curiosity:

"I'm curious about the pine trees this year having excessive amounts of pine cones. I can't ever recall seeing so many."

Scientists confirm the trees are producing an unusually large amount of pine cones this year.

Maureen Foley of Jamaica Plain can hardly take a step in her front yard without crushing one.

"At one time I would be going around scrounging for pine cones because I was into doing some crafty stuff and couldn't find them," she said. "But I have more than enough now that's for sure."

This year's bumper crop is hard to avoid. They're in yards, parks, along roadways. Runners in the Arnold Arboretum in Boston had to dodge them, or plow through them on the trails.

Deltredici says the pine cones falling from the trees now, actually started forming three years ago, so our winter weather isn't to blame for the bumper crop. He says scientists believe it probably has to do with the insect population.

Pine trees don't produce the same amount of cones each year, he says, to throw off the insects that eat the cones.

"Trees do this as a way of avoiding these predators, because if they produce the cones on erratic, unpredictable cycles the insects can't adjust to them."

And while some people might complain about the mess, scientists say a tree's good far outweighs any maintenance.

"If you want a tree that doesn't produce something those are really only plastic trees," said DelTredici. "Trees are so great the fact that we have to clean them up once a year, that doesn't seem too much to me."

Maureen Foley agrees, as she looks at the massive pine that has dumped hundreds of cones on her front lawn.

"This guy is a treasure."

Scientists say you can expect to see these bumper crops about every three to seven years.