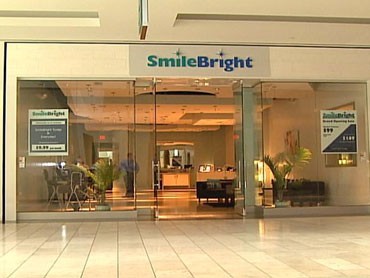 It used to be something you did in the dentist's office, but now you can do it at the mall for a fraction of the price -- teeth whitening.

Patti from East Bridgewater asks an important question on our Curiosity Website:

"I'm curious if all those teeth whitening kiosks that have popped up in malls have to follow the same regulations as hair salons and dental offices?"

We found the answer, and a big argument between dentists and store operators.

It seems easy. Head to the mall and leave with whiter teeth. But there are no dentists or hygienists in shops like SmileBright at the Natick Collection or BleachBright at the Solomon Pond Mall or at Ultimate Smiles, a kiosk in the middle of the South Shore Plaza.

"Most patients have no problem with most of the whitening services that are provided," says Dr. David Samuels, the new president of the Mass. Dental Society.

But he adds a caution. "However, under certain conditions they could be dangerous," he says.

Dr. Samuels is worried about the growth of mall teeth whitening.

"The Dental Society is mostly concerned that kiosks and other sorts of non-professional whitening services are not regulated," he says.

There's the answer to Patti's question -- no regulation. And since the people working at the mall shops aren't dentists, they can't diagnose gum disease, cavities or root problems.

Dr. Samuels showed us X-rays of people with oral health problems that would preclude them from having their teeth whitened.

"Whitening here with all the bone loss could certainly increase the pain level of this patient due to some exposed roots," he says. "A non-dentist would not know any of this information at all," he adds.

We took a hidden camera into three mall whitening shops. All of them were ready to whiten our producer's teeth right away. The only preliminaries would have been a series of questions about his oral health like whether he had any sensitivities, open sores or veneers.

Some of the employees at the mall shops wear lab coats. The American Dental Association says they are, in effect, "masquerading as health care professionals."

"We're not masquerading as dentists," says Matt Dispensa the president of SmileBright. "This is not a dental process, this is cosmetic teeth whitening."

Dispensa says the dentists' concerns are way out of proportion.

Mall employees don't actually touch your mouth. They apply the gel to a mouth tray and then hand it to you to put in your mouth. Dispensa says some dentists are just protecting their economic turf.

"Let's educate the consumer with proper information instead of scaring them to protect our pocketbooks. And I feel as though that's really what's behind the dentists' motivation," he adds.

Where's the state in all this? There is an agency called the Board of Registration in Dentistry.

Here's its' policy on teeth whitening services: "Tooth whitening services offered to the public are considered to be the practice of dentistry, and, therefore, must be provided by a dentist who is fully licensed to practice in the Commonwealth and performed by dental personnel under a licensed dentist's supervision."

Read: Mass. Dental Society's take on shopping For Tooth Whitening At The Mall

The Board spokeswoman would not talk to us on-camera, but tells us that despite that policy, the board doesn't regulate the mall shops because the shops don't use as powerful a whitening gel as dentists do.

But we found that wasn't true.

At the malls they say they use concentrations that range from 22 percent to 35 percent carbamide peroxide gel.

Dentist Dr. Tony Giamberardio prescribes the gel. We asked him what concentrations he and other dentists typically use.

"Typically we find that the most effective range is anywhere from 16 to 22 percent," he says.

Teeth whitening at the mall is a new industry and some states are beginning to regulate it. And Matt Dispensa, the president of SmileBright, says he welcomes regulations so the shops would have to follow uniform rules.

To be clear, the Mass. Dental Society has no evidence that anyone has been harmed at the mall whitening shops. The best thing to do before whitening your teeth, either with products you buy in a store, or at a mall or at a dentist's office, is to make sure you get a thorough dental exam first.

The cost? At the malls the cheapest we found was $100. A dentist can cost you 4 or 5 times that. In either case, the whitening is not permanent.