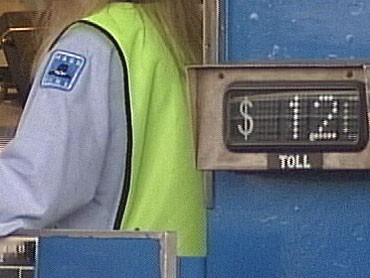 Lazy, overpaid, and responsible for the toll increase.

Those are just a few of the comments some of our viewers make to describe Massachusetts toll collectors.

It's a big topic on our curiosity web site.

"Why do toll takers make so much money?"

While Penelope from Boston wants to know:

"Why are toll operators so lackadaisical?"

Well, WBZ took those and other complaints straight to the toll booths.

On a snowy day we found Mike Cullen.

A couple of lines down, Peter Lachapelle is hard at work, and also tired of being blamed for toll hikes.

"We take the brunt of their frustrations," says Lachapelle, referring to the anger some people feel toward the toll workers.

But that's not how some drivers see it, especially when it comes to toll collectors' pay.

Starting salary is in the low 50's.

Several people we talked to at rest areas along the Mass Pike say their pay is too much.

Bill from Lexington wrote on our curiosity web site:

"I'm curious why toll takers with a high school education, who basically sit in a booth and take money, get paid more than Massachusetts teachers?"

"We're compensated because of the environment we work in. It's dangerous, people have lost their lives out there," he says.

And the environment is rough - snow, rain, cold, heat, angry drivers, and there's all the exhaust fumes.

"I feel, like when a truck and a bus come through, that I've smoked a pack of cigarettes," says senior collector Mike Cullen.

Whether you like the toll collectors or not, one thing is certain, they're an endangered species.

"The days of people in the toll booth will soon be over," says state Transportation Secretary James Aloisi.

To save money he wants to automate everything.

"We can collect toll revenue, if we choose to collect it, through electronic means," says Aloisi.

But some of the collectors don't think that kind of system is workable.

"I'm just not sure that people want their plates to be photographed. You have to take people's privacy concerns into consideration," says Lachapelle.

As for the toll hikes, state officials say getting rid of the collectors will limit those.

But the collectors point right back at the officials.

"That would be the Transportation Secretary or the Turnpike that would raise the tolls. We just come to work and do what we're told," says Cullen.

But with the mounting pressure to pay off the Big Dig and streamline the transportation system, we may not have the toll collectors to kick around much longer.

Let us know what you're curious about.