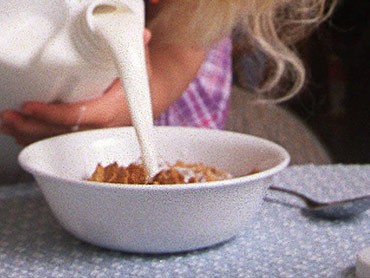 Everyone knows childhood obesity is a huge problem in our country. One WBZ viewer declared her curiosity about the problem on the WBZ web site DeclareYourCuriosity.com.

I'm curious... if others have made the connection between obese children and breakfast cereals made into dessert with all the sugar and other sweet things added to them.

Without reading the labels carefully, it's often hard to identity a healthy cereal from an unhealthy one.

Here's an example. I took two cereals out of my own cupboard this morning. I won't identify their brand names, but they are both very popular cereals. This first one is my son's favorite. It's a puffed rice cereal that he likes because it makes funny noises when the milk is poured over it. It is not a traditional sugary cereal, so we thought it can't be that bad. Well, if you look at the label, the first ingredient is rice, a refined carbohydrate, and the next few ingredients include sugar and high fructose corn syrup. The cereal isn't even sweet to taste.

In the other cereal, the first ingredient is whole grain oats and it has three grams of fiber per serving. The rice cereal has none. Obviously, the whole grain oat cereal is the healthier choice for my kids. Too bad it doesn't make popping noises when milk is added!