While everyone enjoys some spring-like weather this weekend, many meteorologists will have their eyes on a lonely piece of atmospheric energy rotating around a Gulf of Alaska low. That energy will take a ride on the West Coast ridge, and make a date with the Gulf Coast by late Tuesday. And from there? That's what interests us here in New England. So let's take a look at the journey and what the end of this particular weather story will be. 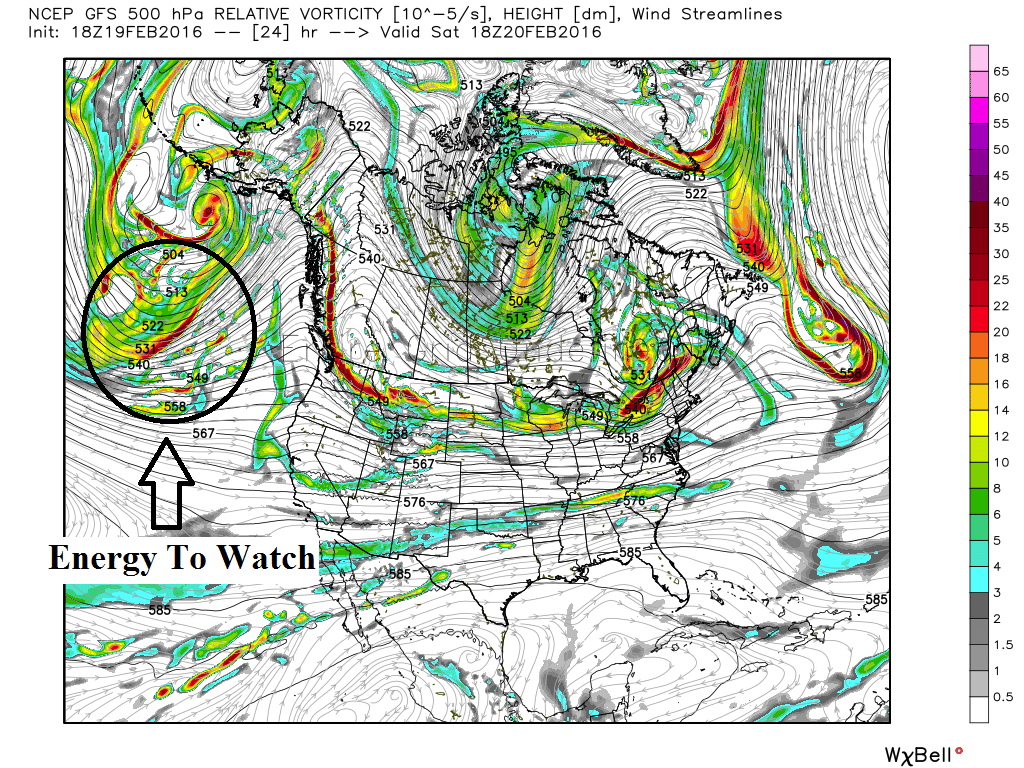 Above is the area of interest on Saturday. A big question mark when it comes to the forecast is how this energy will move along a building ridge in the west. A sharp cascade down the Front Range could lead to deeper and stronger storm development, which in turn would likely turn into a more inland track for the middle of the week. If the energy gets ejected a little farther east, then the whole scenario develops nearly 24 hours later and moves farther east overall. That would put more wintry weather in play for us here in southern New England (and bigger snow for northern New England!) 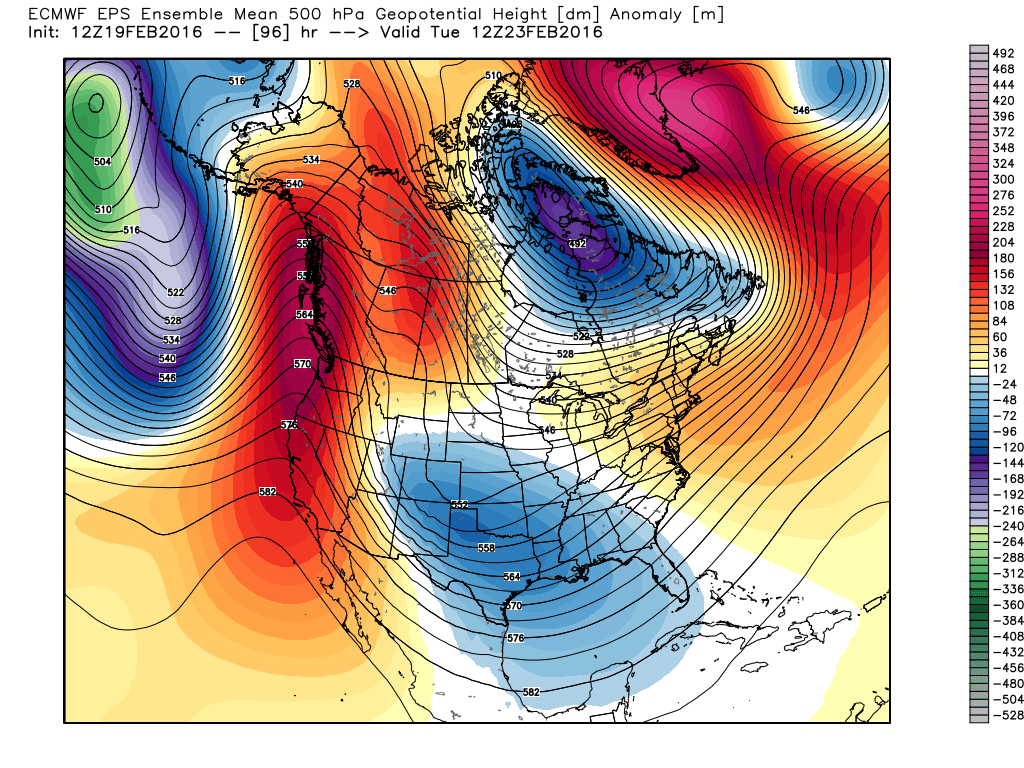 500mb anomalies on Tuesday. Notice the sharp/thin ridge building across western North America, with the beginnings of a deep longwave trough across the eastern U.S. Source: Weatherbell

While the storm gets its act together in the south, a shot of cold air is expected to establish itself over the Northeast on Monday. It's not as brutal as what we saw last weekend by any stretch, but it's respectable cold for late February. As is often the case, it will be difficult to erode all this cold air across the interior. The upper levels will give way first, but it will take time and the surface air will take even longer to warm up. 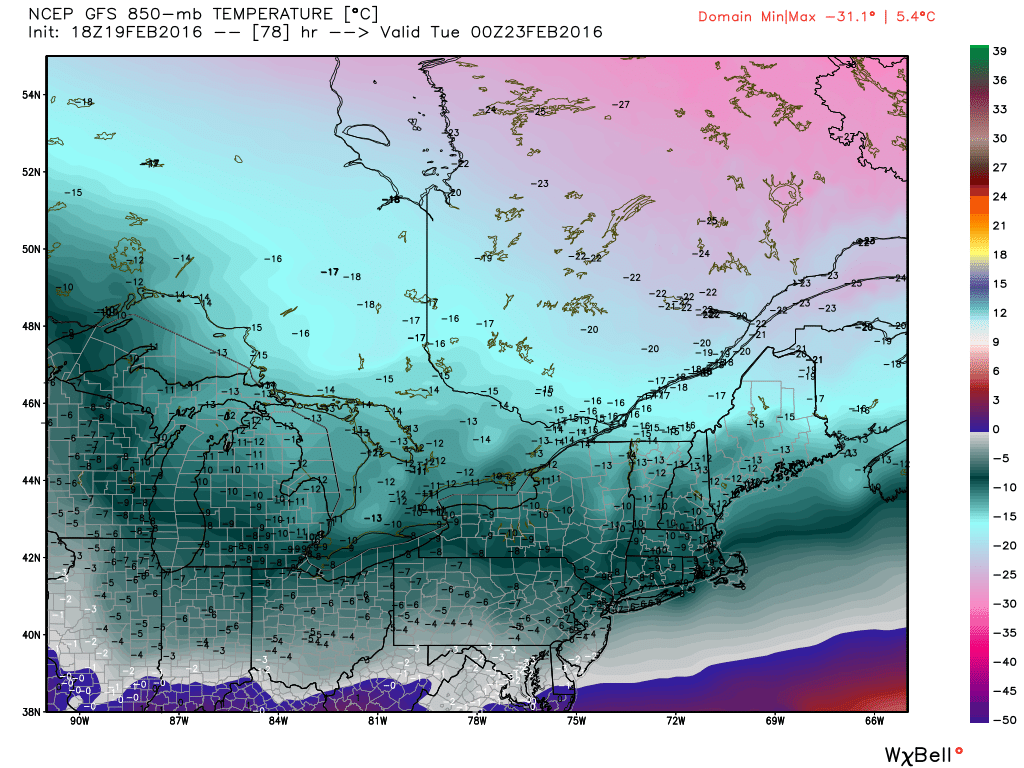 850mb temps on Monday night dip to -8 to -12C across the area. Surface highs will stay stuck in the 30s on Tuesday and Wednesday. Source: Weatherbell

The cold high pressure responsible for feeding in this cold will not hold over SE Canada. It rapidly shifts eastward during the middle of the week. However, there's still an elongated ridge of high pressure (banana high) from the Great Lakes to the Northeast that should prevent quick development of deep-layer southerly winds like we saw with last week's storm. I don't think we're talking about a rapid spike into the 50s with this situation. Surface chill should be able to hold on for a good amount of time. 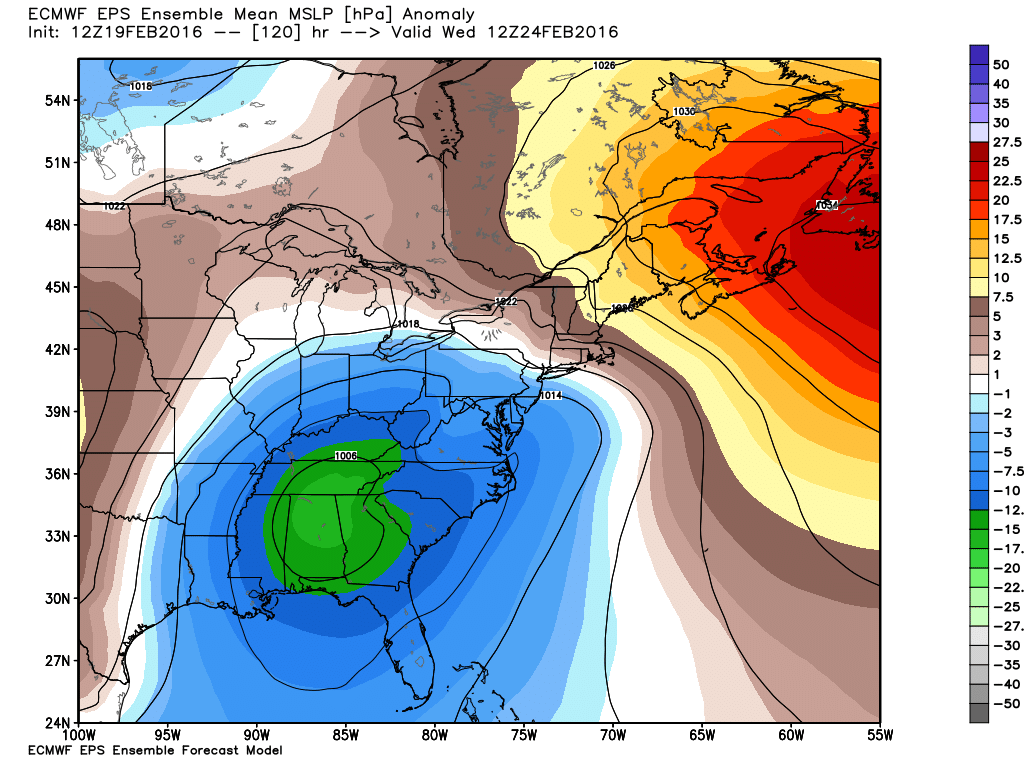 Then we come to the main question here, which is whether 2 separate waves of low pressure round this trough, or if one takes the reins. Friday's 12z ECMWF has a pair of well-defined low pressure systems - one arriving Wednesday and the next on Thursday. Other models, like the parallel ECMWF, UKMET, and GFS are showing a more consolidated storm system with a track far inland. There's simply too much energy in the system to have a good level of certainty 5 days out. The models are excellent at identifying stormy times well in advance, but not honing in on the exact details at this range. And a lot of the end game for us depends on how this plays out. 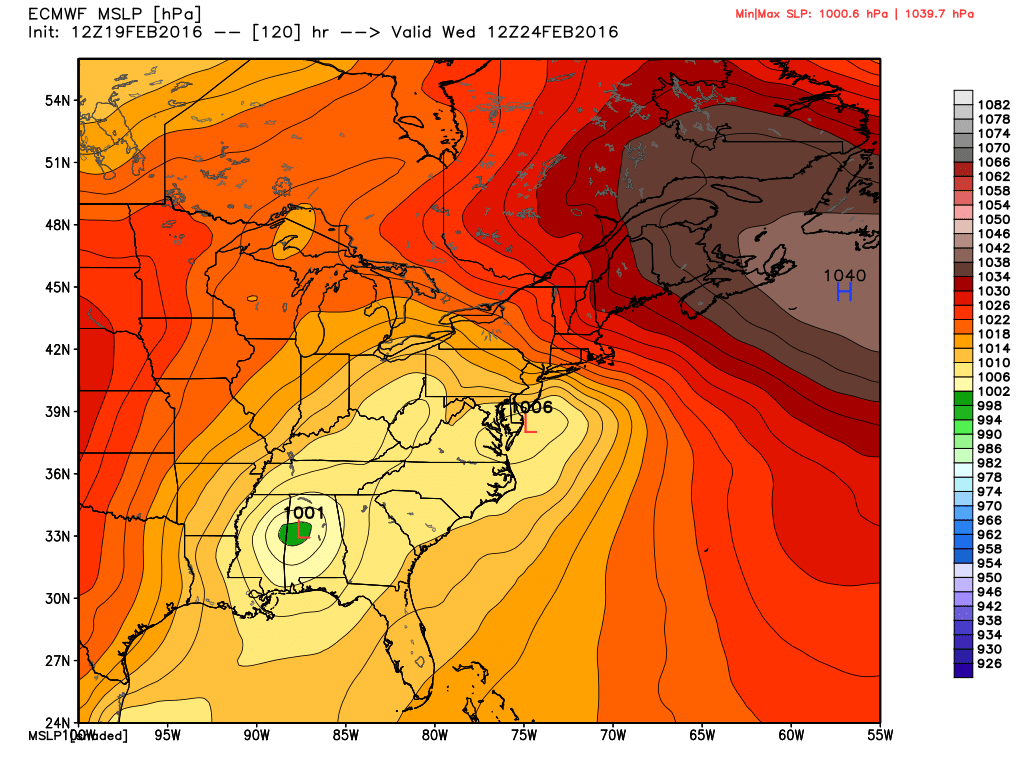 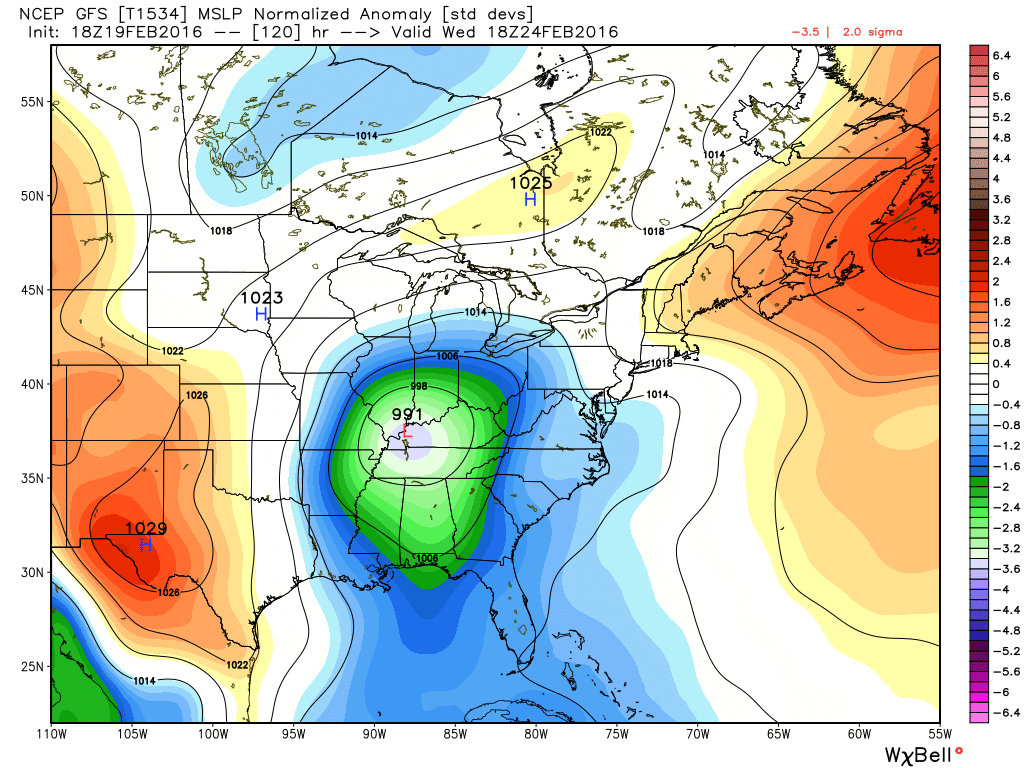 GFS (and some other guidance) much farther west and more intense with a singular storm than the ECMWF, which comes in 2 waves and farther east. Source: Weatherbell

A singular storm likely goes west, and gives us a mix to rain situation like many of the storms this season. Two separate, weaker lows could help keep more cold in place and offer a prolonged period of snow and ice, especially for interior New England. Either way, there's a good bet that there will be plenty of precipitation with a deep pull of moisture out of the Gulf of Mexico. So it ends up being rather ugly around here in both situations. 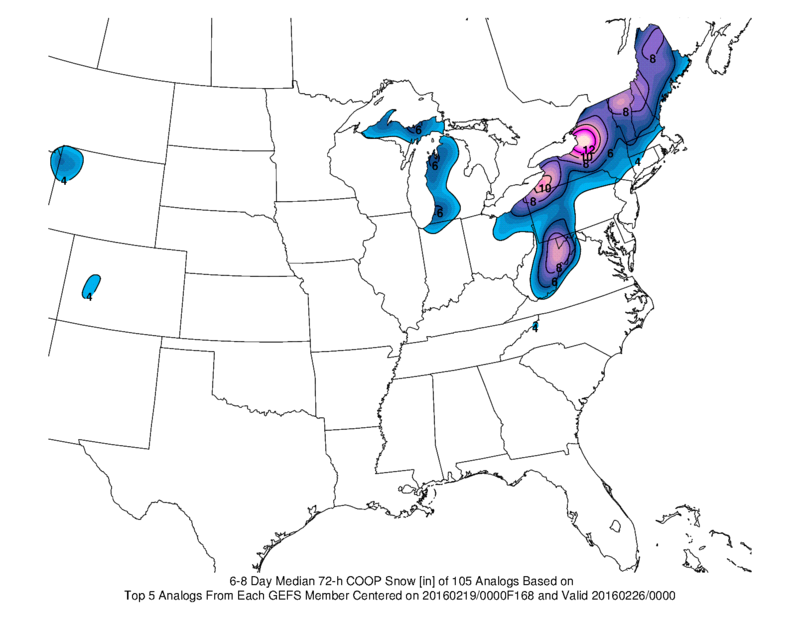 So What's the Call?

All things considered, I think what we can expect here can be boiled down into a few main headlines at this point (to be refined in the next couple of days).

What I'm envisioning for this one is a drawn out ugly week of weather from chilly temps Tuesday to precipitation on Wednesday and Thursday. There should be enough cold air around so that as the trough digs in and moisture starts streaming up the East Coast, we get a thump of snow and ice on Wednesday, especially away from the coast. It appears enough warming aloft will take place to hold down snow accumulations to rather meager levels, but that cold at the surface could give us a long period of ice across the interior.

I'm favoring a situation that gives us that sloppy mess on Wednesday, but then takes a stronger storm west of us Wednesday night/Thursday. Eventually enough warm air would overcome the cold and change us over to rainfall with a quick spike into the 40s and maybe even the 50s for a few. Sound familiar? Yep, we've had several of these this winter.

So all told it's an ugly early spring storm kind of look. And behind it comes plenty of cold air for Friday and the final weekend of February.  We'll be updating the forecast over the next few days, so as things evolve we'll give you the latest!