BURLINGTON (CBS) – State police have located a man who witnesses at the Burlington Mall thought was carrying a rifle; and confirmed the item was actually an umbrella.

The man, who is a worker at nearby Lahey Clinic, contacted police after realizing he fit the description of the news reports. Officers were able to use surveillance video and witnesses to confirm that man was the person they had been looking for.

"He called here and said, 'I think they're looking for me. I was in the mall and I was carrying an umbrella,'" said Burlington chief Michael Kent.

The initial report came in Tuesday around 10 a.m., from two women inside Nordstrom.

Mall security called 911 and federal, state, and local police descended on the mall.

According to state police, the witnesses reported seeing a short white man wearing a gray sweatshirt, black pants, and a black backpack, carrying what at the time, was thought to be a rifle.

Everyone inside was told to get out. "We got a call to evacuate the mall there's a mall running around with a gun," recalls Dotti Gerrior, who works at the Victoria's Secret inside the mall.

Police spent the morning questioning close to a dozen people fitting the description, speeding from the scene to surrounding areas and closing off the parking lot outside of the store.

Officers from Burlington, Woburn, Wilmington, State Police, and the ATF all assisted with the search. 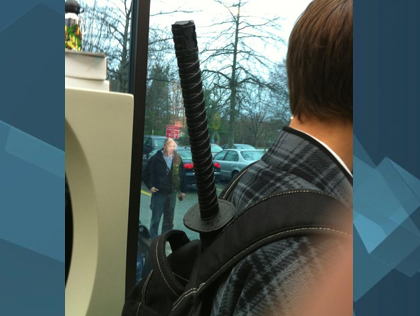 SWAT teams were on scene and the state police helicopter was also circling the area.

Workers inside several stores inside the mall told WBZ-TV they had closed their store security gate around 10 a.m. and hid out until police gave the all clear.

A man who runs a kiosk inside the mall tells WBZ-TV that around 10:30 a.m. police came by and told him he had to leave. He described the evacuation as "orderly."

"You couldn't go down the Nordstrom alley. There was a bunch of police here saying 'No, no, no, you can't go down here,'" said Jim Kenyon. "I determined it was time to exit the mall. I didn't know what was going on. There was a policeman where I exited the mall, but he allowed me to go, and there were a lot of employees and everybody on the sidewalk."

The Lahey Clinic released a statement saying in part, "The Lahey employee is pleased he took appropriate action and contacted police, however he feels terrible about the situation."

The mall was reopened, the investigation was closed and in the end Burlington Chief Michael Kent praised the witnesses who saw something and said something. "I would hope that if the exact same thing happened tomorrow that they would do the same thing as would we."