Having a rich historical background is basically a given in a city such as Boston. From the streets to the architecture, from Southie to the Back Bay, the city of Boston possesses a unique cultural significance all its own. This historical sensibility also translates to a number of the city's bars, with many Boston watering holes having gained legendary reputations all their own. Here are five of Boston's best bars with history.

Located in the historic downtown Beacon Hill area, in between Freeman Place and Mount Vernon Street, 21st Amendment is not only notable for apparently being one of the favored bars for Senator John Kerry at one point (there's even a burger here named after him), but has also earned a hefty reputation as being THE place to hit up for delicious nachos within city limits. The 21st Amendment has also served as a filming location for a number of Hollywood movies, including 2011's "What Your Number?" featuring Anna Faris and Chris Evans. This watering hole's worth a look.

The art of "The Dive" should not be understated when discussing the historical arc of the prototypical Boston bar. Indeed, there are plenty of dive bar fanatics located here in the city, and, for them at least, Biddy Early's seems to have always been there as one of the city's oldest "dive bars," serving cheap drinks and easy grub for any and all who might pass through its doors. Located in the city's Financial District, Biddy Early's provides a good time almost every time, particularly if a no-stress afternoon drink with friends or an early evening, after-work pub-grub crawl is in the cards.

The Alibi Bar & Lounge is located within the confines of the Liberty Hotel – in a former jailhouse, no less – which exists as one of Boston's many historic hotels. There's a nice, "criminal" theme to the decor here, consisting of famous celebrity mugshots and their assorted crimes, while Alibi itself provides a relatively comfortable bar/lounge atmosphere with an elevated sense of style. This elevation is also attached to the price, however, so one's best bet is to either arrive relatively early in the evening for drinks or plan ahead when Alibi becomes more crowded in the later hours. 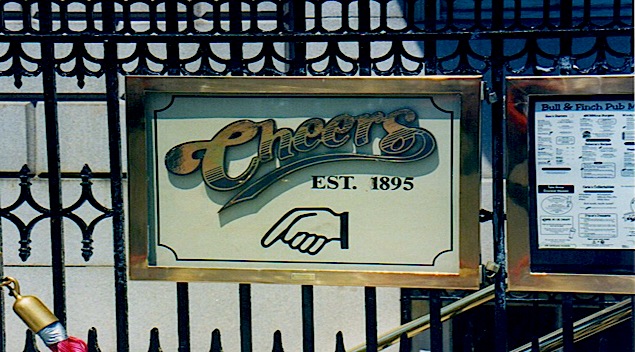 Make no mistake or bones about it; Cheers is most definitely a tourist joint, and a most cliche drink destination if there ever was one, here in the city of Boston. Yet, one would be remiss to doubt the continued drawing power of Cheers to visitors from all over the world, all of whom simply want to be a part of the legacy, the enduring historical significance this Beacon Street legend has to offer fans of the classic television program. Granted, this "real" Cheers is just your average, everyday bar with drafts, drinks and pub food, but sometimes this is all it takes, well that and everybody knowing your name.

The Green Dragon Tavern is one of Boston's most historically significant taverns, although its current location serves as a renovated reminder of the original Green Dragon, sadly demolished in 1854. Still, today's Green Dragon Tavern keeps the revolutionary spirit alive as it celebrates the original's legacy as a meeting place and public house for Paul Revere and more, a place where such history-changing acts as Revere's famous ride and the Boston Tea Party were planned over a pint or two. That spirit lives on in the Green Dragon's stiff ale and hearty food menu, offering sustenance with a side order of history.

George Pacheco has been writing professionally about arts and entertainment for over a decade. A graduate of the University of Massachusetts Dartmouth, George currently resides in a humble New England home with his wife, cat and massive music and film collection. His work can be found at Examiner.com.