It's been a ho-hum fall (no complaints), but finally things are starting to look more active. We'll be all over the place for the next week, with temperatures flying up and down and some chances for much-needed rain. October will go down as a month with a 3" rainfall deficit in Boston and surrounding areas. So while we could do without the strong wind gusts ahead, the moisture is most welcome.

First things first, Happy Halloween! The weather wasn't exactly great, but let's put a positive spin on this one. Most towns didn't even get to celebrate Halloween for the past 2 years, with Sandy knocking many back into the dark last year and Snowtober doing a number on the grid 2 years ago. So yes, we had to deal with some showers this time around...but at least the kiddos got to have fun on the actual holiday! 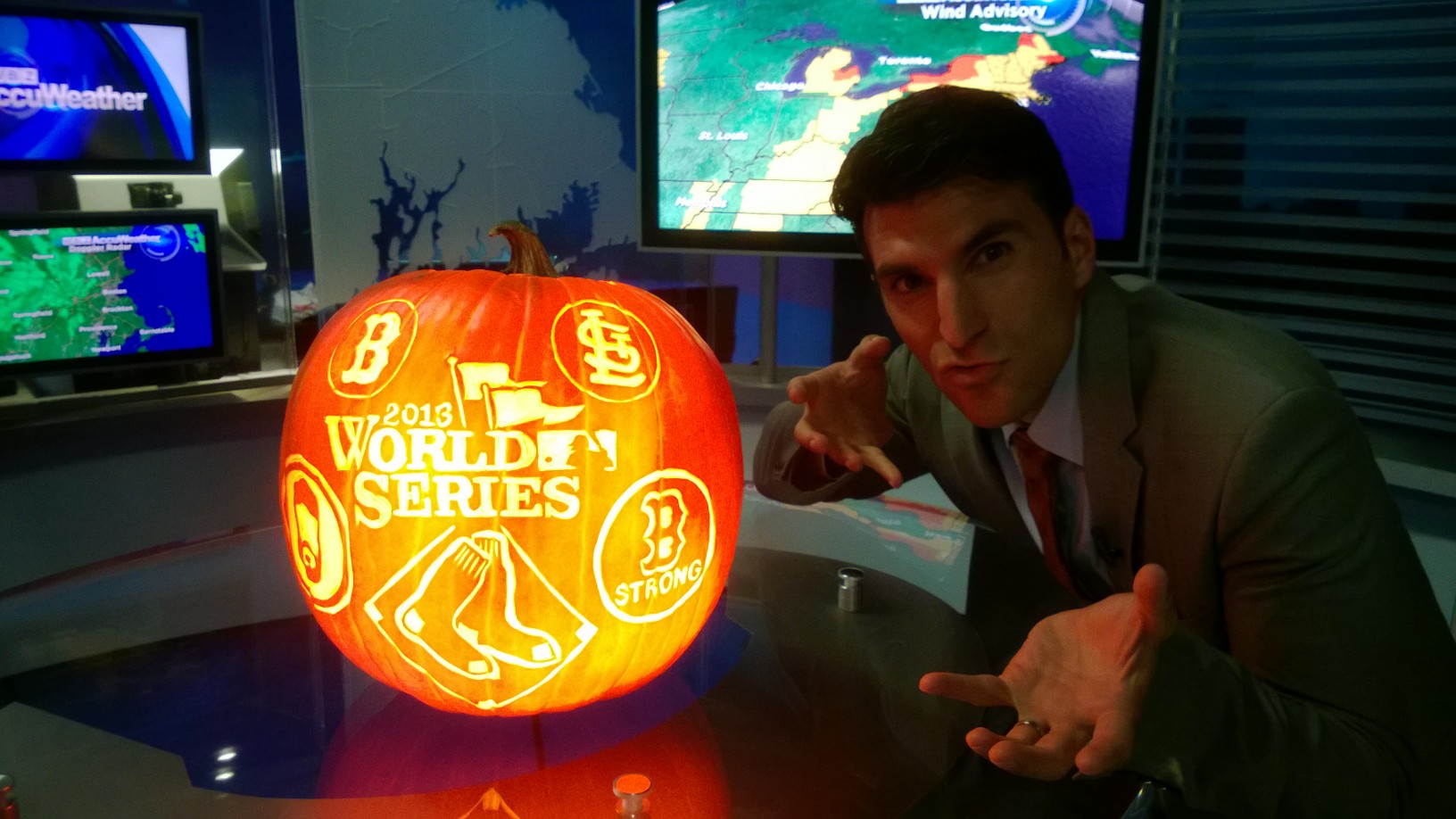 And I couldn't resist this photo that features arguably the most well-known Meteorologist in the country. Check out this mini-Jim Cantore! Awesome weather costume. Jim says the kid may have been trying to be me with that hair! Somehow I doubt it...but looks good on this little guy! 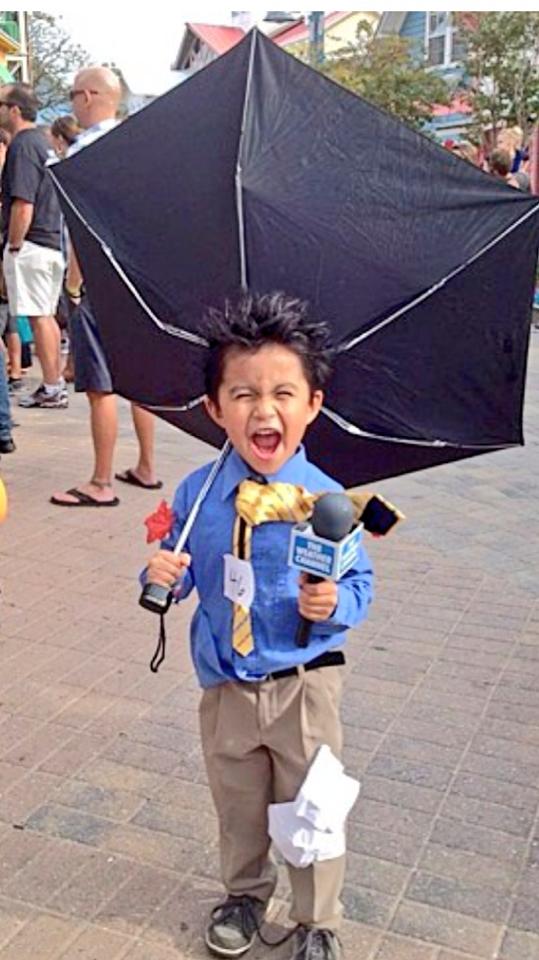 STORMY END TO THE WEEK

Now to the storm at hand. It's bringing a tornado threat to the Ohio Valley and ruining Halloween for many in its windy and potentially destructive path. This area of low pressure will bomb out as it crosses the Great Lakes, and draw large amounts of warm, moist air northward as it does so. We're feeling that here, as dew points are soaring into the low 60s and temperatures will top 70 on Friday! An extremely warm way to kick off November.

There are 2 main elements for our forecast locally. One is the wind, and two is the rain. I think that the wind will be far be a bigger story. The National Weather Service has put out a Wind Advisory for almost all of New England, which runs from 6am to 6pm Friday. Many gusts to 35mph are likely, but some may reach 50mph out of the SSW early Friday morning through early in the afternoon. The strongest gusts will be felt across SE Mass and higher terrain, and should enough to bring down some tree limbs and cause scattered power outages. A Gale Warning is also in effect for coastal waters, with 7-12' waves expected. There may be some splashover and minor coastal flooding on Friday with wind-whipped waves in the usual locations, but nothing major.

When it comes to rain, the strongest forcing in the atmosphere will stay off to our west. While we'll see plenty of scattered showers, many of them will be smatterings of light to moderate wind-driven rain, and all told will only add up to about .2-.75" of total rainfall. We could use more, but will take the moisture!

The end of the rain will come in the form of a squally line of showers and perhaps thunderstorms early Friday afternoon. After those downpours, things will dry out for the evening hours, although it will stay gusty. With highs in the low 70s and breaks of afternoon sun, it should be a pretty interesting start to the 11th month. The one spot that likely won't see breaks of sun will be the Cape & Islands, as it looks like clouds and showers will stick around through the middle of Saturday.

AN ECLIPSE, THE END OF DST, A PARADE....HUGE WEEKEND!

There's a big day on tap for the start of the weekend, with a massive city-wide party planned for our World Champion Red Sox! The rolling rally has a been of a notorious past when it comes to the weather, but we're in pretty good shape this year. A wave of low pressure will try to keep clouds around the city in the morning, but we'll be right on the line. There's a chance we could break into a decent amount of sunshine, and either way I'm expecting lighter winds and mild temperatures. Perfect for thousands to show their Boston Strong pride! 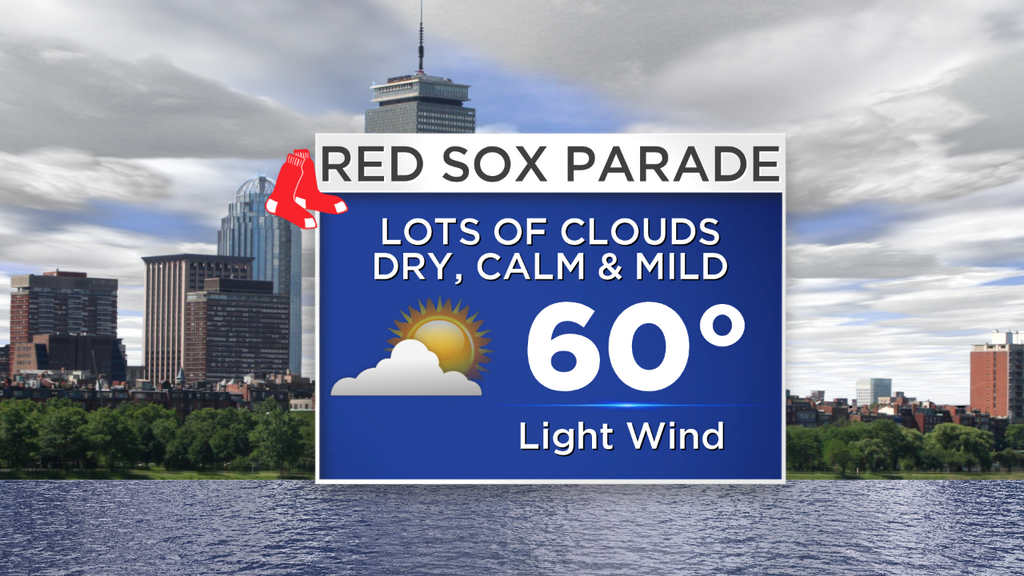 A trailing cold front sweeps through Saturday night, and down the temperatures will plummet. From a high of 72 or so on Friday we'll drop all the way to highs in the 40s on Sunday. Add in a gusty north wind and ocean-effect clouds/showers for eastern MA, and it will feel a heck of a lot different out there. To show the wild temperature swing, I grabbed these two 850mb anomaly maps. On Friday we're +2 STD devs, and on Sunday evening we're -2 STD devs! That's quite a rapid and extreme change. 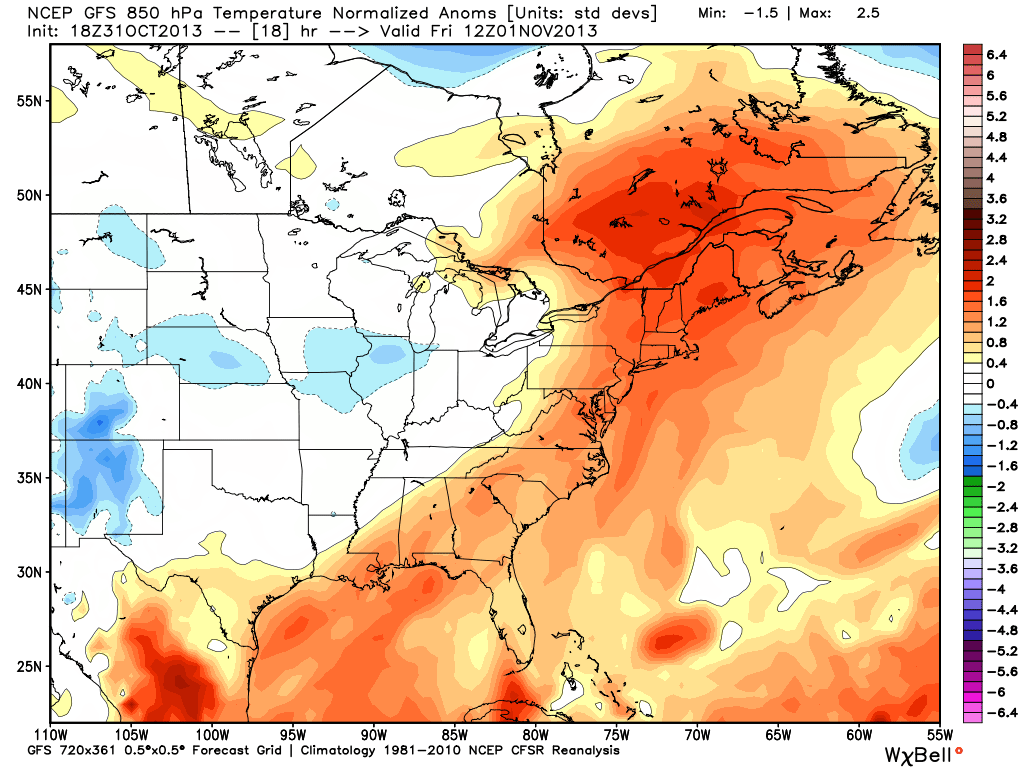 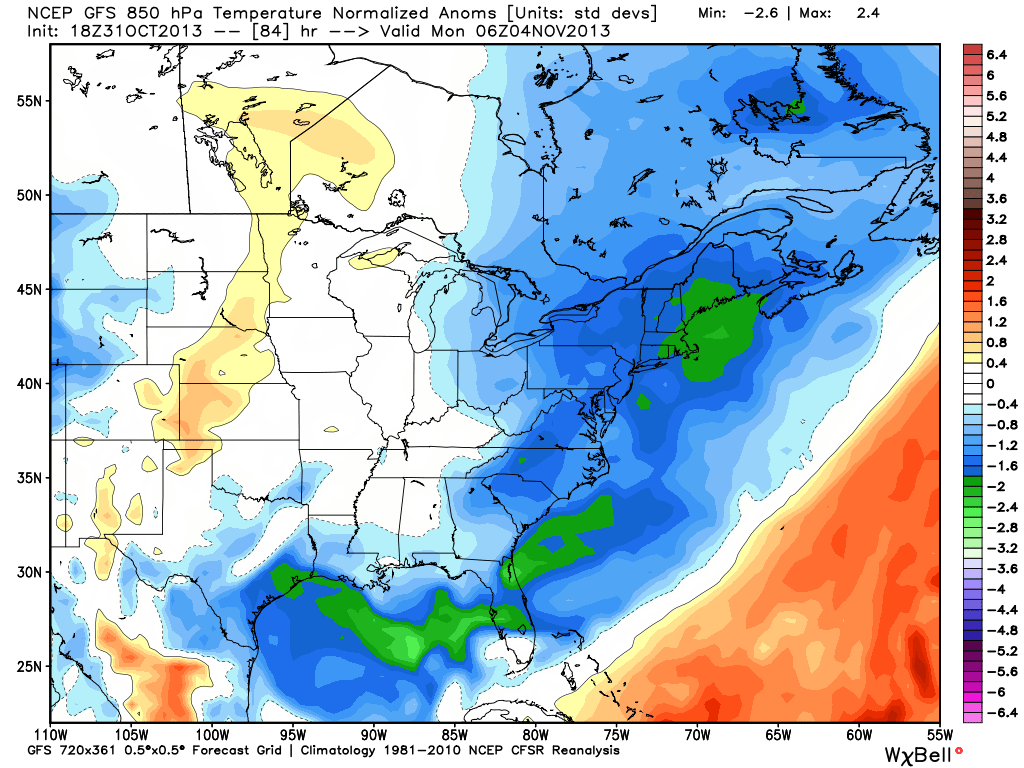 The good news is we get to soak in an extra hour of sleep after a day of celebration on Saturday. At 2am in the wee hours of Sunday morning, we 'Fall Back' to Standard Time. While the sleep is nice, note that the sunset on Sunday is one that makes us all cringe, unless you're a vampire. The 4:35 sunset means most of the Patriots game vs the Steelers on Sunday will be played in darkness, so come prepared for a wintry game with cold temps, gusty winds, and no sun to help warm you up. 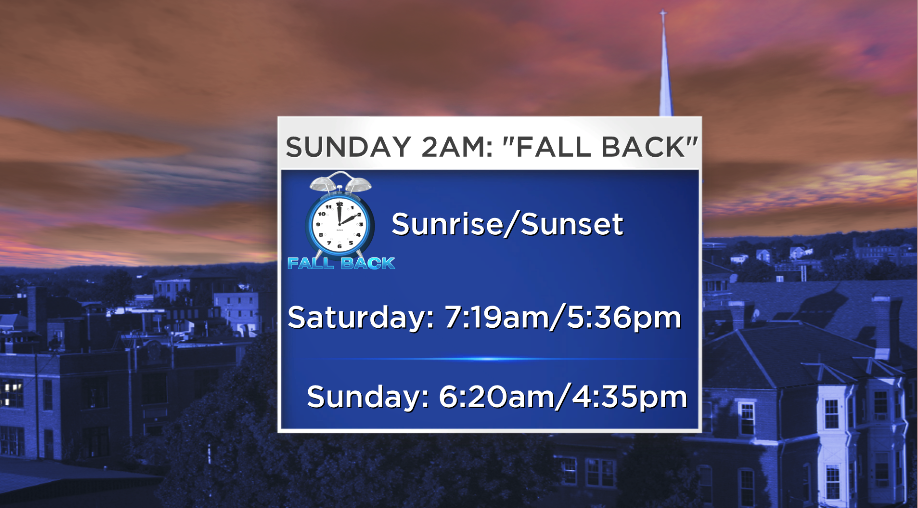 And if there wasn't enough going on already, there's also a partial solar eclipse slated for Sunday morning. There may be some clouds to contend with, especially for eastern and southeastern parts of Massachusetts. We'll see how things pan out...you can read more about it here. 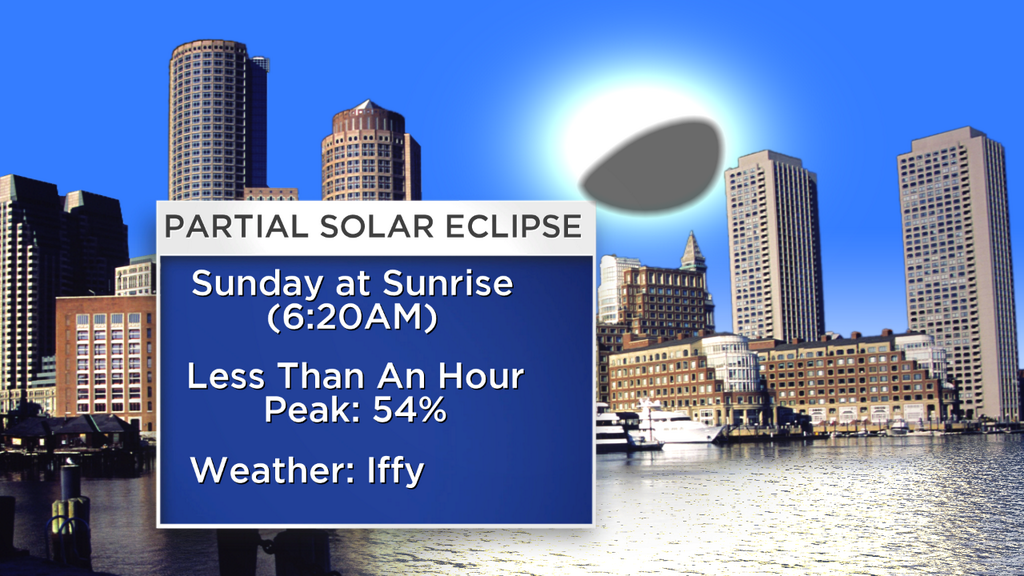 We may see the first freeze of the season in Boston Sunday night (we still haven't hit 32º in the city yet), and a cold start to the first week of November. Tuesday looks seasonable, and then the next storm headed our way takes a similar track to the one we're dealing with now. Mild air will surge northward again, and showers return to the forecast by Thursday.