Well, this storm is certainly starting to look more wintry. A much colder look on a bunch of our models this morning. Could this change tomorrow? Absolutely...but more and more this is looking to have a look of a Nor'easter coming up the coast.  There are still plenty of questions regarding the overall track, the supply of cold air into the storm, and the seasonal effects of how hard it is to snow this time of year. But memories of the April fool's storm of 1997 remind us how easy it can be to get a quick heavy snow depending on the timing and track of a storm.

So here we go again...Tuesday's runs...likely to be different from Wednesday's & Thursday's run...but hopefully close enough that this early speculation rings true.

The Euro has an all out Nore'aster off the coast. Any Morning mix changing to snow for many..excluding the Cape. Gale force winds at the coast. Potential for a foot of snow inland away from the coast. 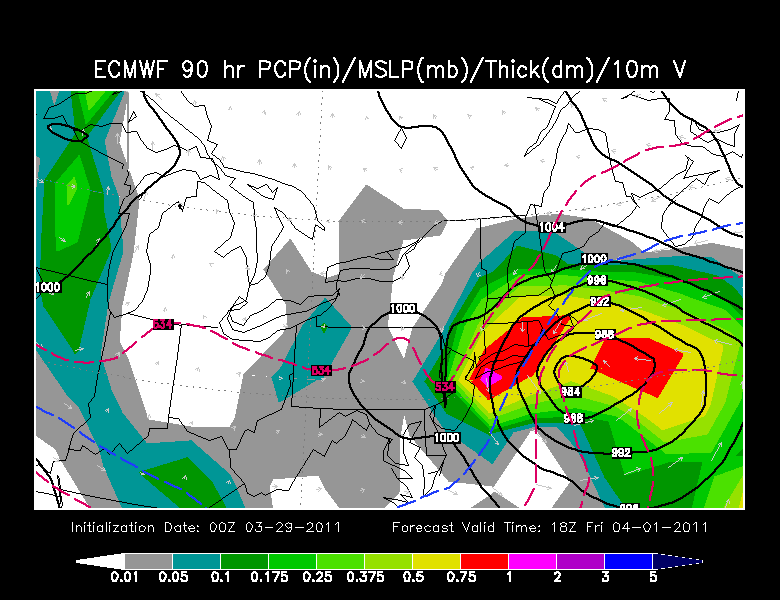 850 mb temps on the Euro and GFS are cold aloft to support snow. The O line barely makes it over the Canal. It's a cold look. The question is the boundary layer warmth at the surface with a wind off the 40 degree water could allow for mixing at the coast...also the lack of a real cold high to supply the cold into the storm. It looks snowy to me. 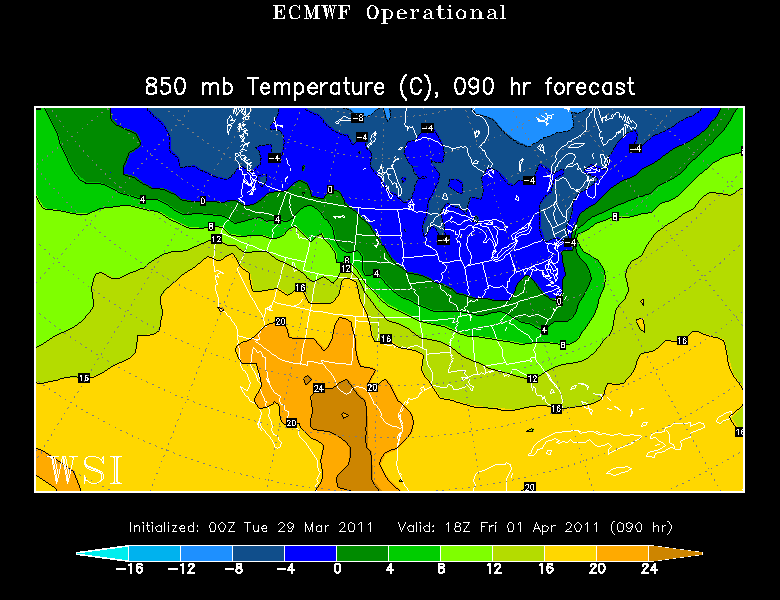 How about the O6Z GFS...very similar look to the Euro this morning. A low bombing out just southeast of Nantucket. Are you kidding me? Again the 850 line is down towards the Cape with the 540 line (Snow/rain) barely getting up to Boston. As this low pulls away any mixing changes to snow later friday and friday night...but lighter amounts. The precipitation looks heavy...so as this falls it will likely drag the cold air down with it and fight off any low level boundary warmth. Again..potential for a foot of snow inland. 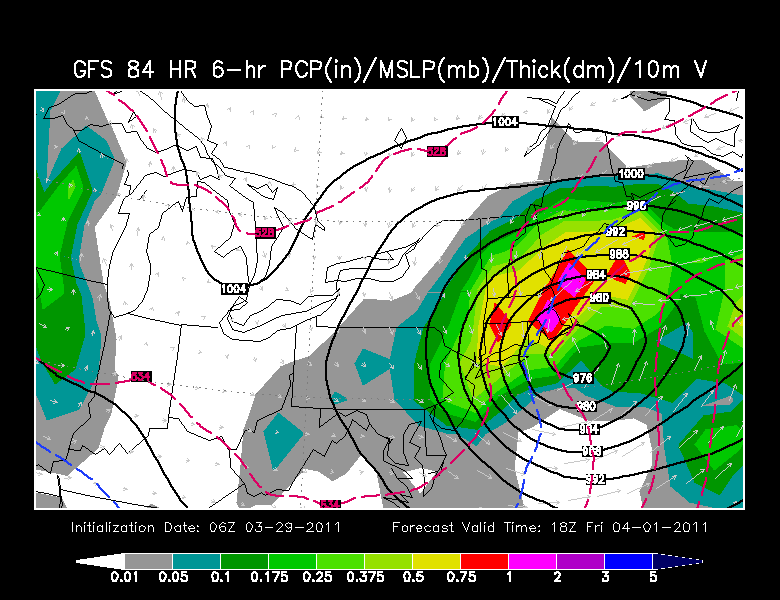 The Canadian has a farther offshore track...which would be a lighter snowfall for Southeast MA. The UKMET this morning has a similar look to the Canadian with a low moving far enough south of New England for the Northen fringe to graze southern New England with a  Snow. The UKMET was far west yesterday...so it is all over the place trying to figure this out. 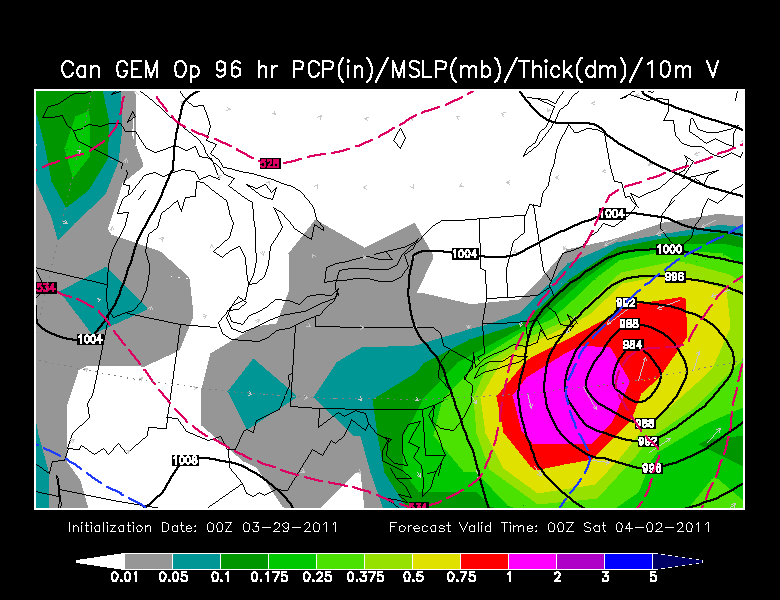 The Japanese is still holding onto to it's inside running low up the Appalacians with a secondary up the Hudson river valley...bring a wamer solution and mostly a heavy rainfall.

The RPM this morning is intersting as they have the precipitation starting Thursday and continuing into Friday. The map below show total accumulation of snow on the ground by 12Z Friday...so it does not even include what falls on Friday. This has the greater Boston Metro area with 4-6" of snow, with 6-8" in the Wocester Hills by early Friday morning...with more to fall!  Bad news. 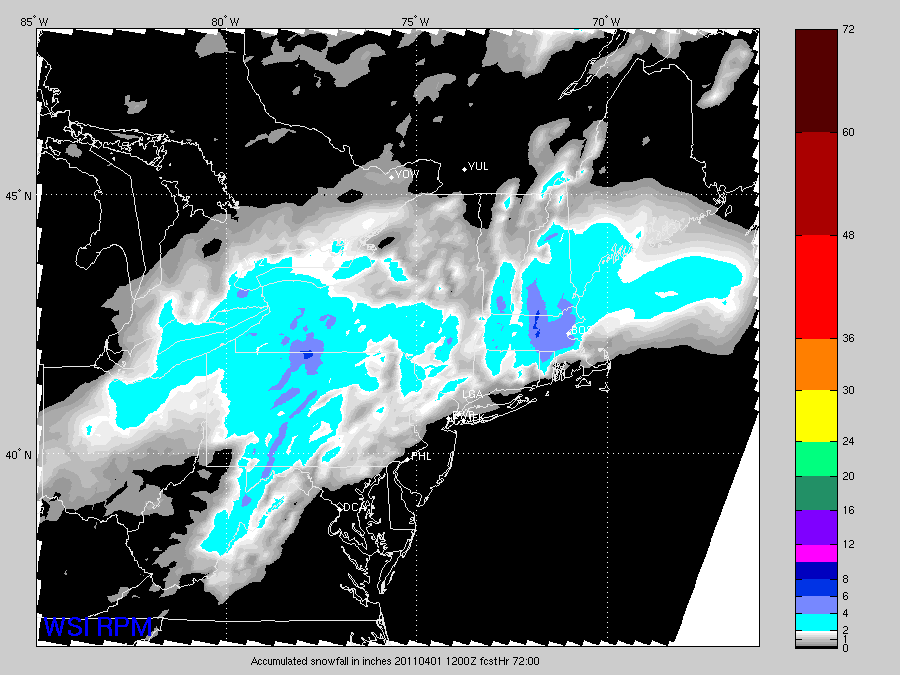 This SREF winter weather forecasting product BELOW shows the probabilty of snow. The Blue is a 90% probability, the Red is a 70% probability. Yikes. But this product is based on the Candadian which does take a lot of the moisture south and just grazes us...with an apparent mix.

I like the map below for a guidance for an early idea on who can expect snow. I think any where outside of 128...it is looking like a pretty good thumping of snow is possible...if not likely. Considering the amount of moisture which is in play with this system any sort of track south of New England could spell bad news for the winter/snow haters of New England.

The 12z GFS prints out QPF totals in southern New England ranging from 1.25-1.5". If some areas remain all snow...depending on the tracks...well, the potential for some areas to see a foot of snow is not out of the question...especially if the track of the EURO or GFS verify.  Though mixing remains a concern at the coast,  Any sort of elevation will almost gurantee all snow with ratios of at least 10-1. You can see heavy precip extending from Washington DC to Boston. Even the major metropolitain areas should be on the look out for snow...track dependent. 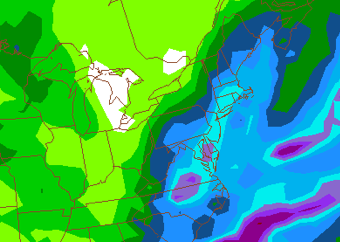 Below is the 12Z GFS 500 mb Vort for Thursday night. Check out the energy rounding the base of the trough heading towards  mid-Atlantic and New England. 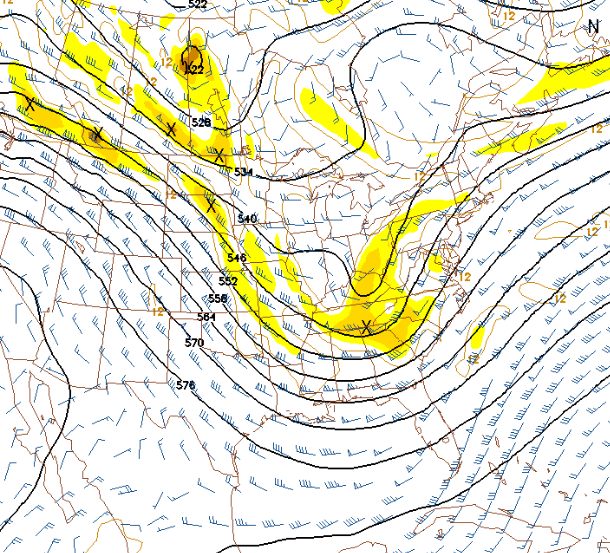 Again...this can all change tomorrow. This is just a blog to show you what we are looking at TODAY and our current thinking. This storm has real potential and will likely have an area of heavy snow inland, rain at the coast...primarily southeastern MA...with strong winds too. If this heavy wet snow occurs the potential for power outages.

There is still plenty of uncertainty in how this will play out. More changes in the coming days are almost guranteed. The NAM has the storm completely missing us to the south. Not buying that solution when you look at everything else. I still believe this will be a significant storm, luckily quick moving. It does appear today to have an increased risk of an interior heavy snowfall. We will see. 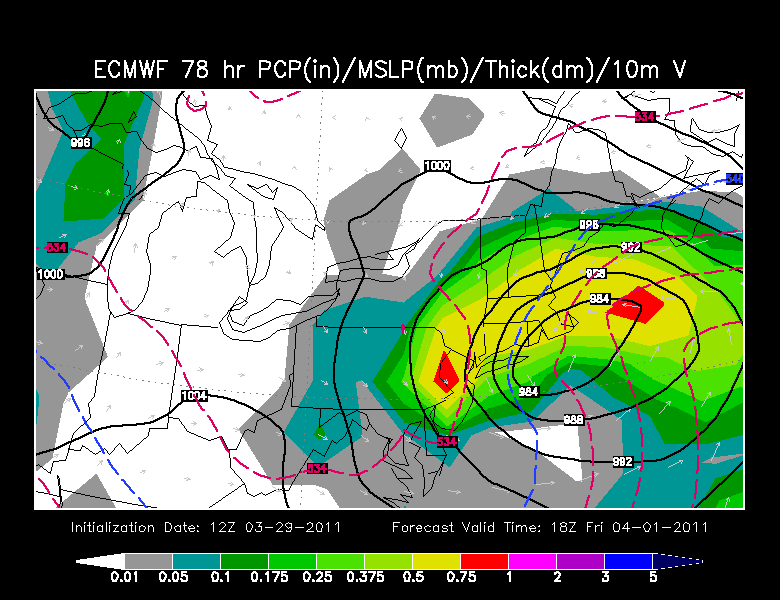