BOSTON (CBS) -- The NBA trade deadline is coming up this Thursday, so while you're eagerly awaiting to see what Danny Ainge has up his sleeve, take a look back at some of the best and worst trades in Celtics history.

1956: Ed Macauley, Cliff Hagan (and the Ice Capades?) to Rochester for Bill Russell

Eleven titles in 13 years. Eight in a row. Bill Russell was the ultimate winner. In 1956, Red Auerbach made what at the time was a tough decision to send Macauley and Hagan to the St. Louis Hawks in exchange for the second overall pick in the NBA Draft. Legend has it that Auerbach was able to persuade the Rochester Royals to pass on Russell at first overall in exchange for a promise that The Ice Capades would travel to Rochester. Considering the Ice Capades went out of business when I was less than 1 year old, I don't quite understand the appeal, but I hope they were absolutely incredible, because Bill Russell had a pretty solid career in Boston. Ice Capades aside, there's no denying how much the swap changed the landscape of the NBA. Auerbach's trade for what turned into Russell was arguably the biggest steal in league history.

Red was at it again in 1980, as the legendary coach/team president added two future Hall of Famers in another steal of a trade. The Celtics received Robert Parish and the third overall pick in the 1980 draft from the Golden State Warriors in exchange for the first and 13th overall picks. Of course, that third overall choice turned into Kevin McHale. The team went on to win three titles (1981, 1984, 1986) thanks in large part to Parish and McHale, while Golden State wouldn't win another title until last season.

Just About Everything in 2007:

What an offseason Danny Ainge had in 2007. The Celtics GM orchestrated one of the quickest turnarounds in league history, as he took a team from the tank to a championship in one year. Allen and Garnett joined Paul Pierce to form the Celtics' new "Big Three," and the rest was history. While Jefferson has had a nice career, Ainge didn't really give up anything else of value to acquire two future Hall of Fame players still in their primes. Anything is possible!!!!

2013: The Day the Nets Decided to Take a Five-Year Break From Basketball

Oh no, Billy King. This trade would never go through on 2K, and it should never have gone through in Brooklyn either. While Nets owner Mikhail Prokhorov stated that "the basketball gods smiled on the Nets" that day, I think he may have been mistaken. Having just moved to Brooklyn, the Nets were looking for name notoriety in Garnett, Pierce and Terry, and were convinced that a championship was within reach. If this trade had happened 10 years earlier, it would have been worth it for the Nets. All three ex-Celtics no longer play in Brooklyn, while the team is still on the books for two more first-round picks and the right to swap in 2017. If that wasn't bad enough, the Celtics have also already used a trade exception earned in the deal to acquire all-star Isaiah Thomas.

The Celtics gave up on Chauncey Billups less than a year after drafting him third overall. Oops. Celtics coach Rick Pitino felt pressured to make the playoffs, so Pitino decided it'd be a great idea to move on from the young point guard. "Mr. Big Shot" as he's now known went on to have quite the career in Detroit; granted it did take him stops in Toronto, Denver and Minnesota on the way before blossoming into a star. Anderson stuck around in Boston until 2002, but as a whole, the return for Billups was very underwhelming.

Seven-time NBA All-Star Joe Johnson was very briefly a member of the Boston Celtics. The team's 10th-overall pick in the 2001 Draft played only 48 games for the Celtics before being traded to Phoenix. At the time, the team's thought process was to go for a shot at the title that season. The trade didn't work out, however, as Boston lost to the Nets in the Eastern Conference Finals that season, and ended up losing out on a future all-star. 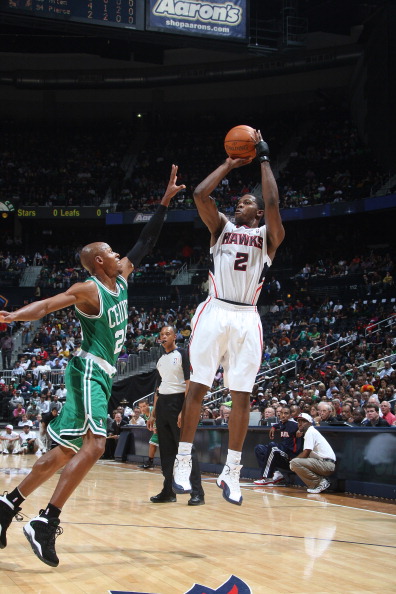 Raef LaFrentz was in year two of a seven-year, $70 million dollar contract. That's all you need to know about this trade.

On paper, this trade really wasn't so bad. Jeff Green was a young, talented scorer and Kendrick Perkins didn't have the greatest career in Oklahoma City. Still, toughness was lacking from the Celtics after the trade, which hurt the team's chances at returning to the NBA Finals. Doc Rivers admitted the trade was a mistake later on, which added more credence to the belief that Perkins was an essential piece of the Celtics at the time.

Will the 2016 Trade Deadline add another big deal to either list?

Johnny Carey is a senior at Boston College. You can find him on Twitter @JohnnyHeights.