BOSTON (CBS) - The pumpkin beers are on the shelves, daylight is harder to come by, the Patriots are in action, and kids are back in class. Fall is all around us in New England, and we all know what comes next. Nature's pyrotechnics as trees end the growing season with a grand finale. A look around however, tells us that this year may be in trouble. An historic drought is leaving trees tired and worn down. They were robbed of water, attacked by the worst gypsy moth invasion in decades, and woken up from their slumber during an exceptionally warm winter. It hasn't been an easy road in 2016. Which leads us to the big question - will the autumn show be ruined?

The answer is - maybe. Typical weatherman speak, amiright? But it really comes down to location. There are widely varying conditions across New England, which should end up producing a wide array of results. The highest impact zone will most certainly be eastern Massachusetts, southern New Hampshire, and coastal Maine. However there still should be plenty of color at short drive away if your town is a dud. Here we break down some expectations for the next several weeks.

Let's start with what we know...

Rarely does foliage completely let us down. The truly bad years are the ones which feature soggy and murky late summer/early fall weather, or in years when hurricanes throw salty air inland and 'burn' the leaves. Dry weather can hurt us, but not complete wreck the operation. In a perfect world we'd like a nice cold winter that gives way to a wet spring and a seasonal summer, ending in sunny days and chilly September nights. But we know that ideal weather is a pretty hard thing to achieve and there's plenty of variation from year to year.

Higher elevations are starting to change, thanks to a few cool nights recently. Source: The Foliage Network

This particular time around has featured an insanely warm winter, a dry spring, then a record dry summer, and now a very warm start to fall. The cold spell in early April destroyed or damaged the buds of some trees (most notably fruit trees, but some maples as well). The dry weather sapped energy from the trees just battling to survive. And a warm fall adds to the fatigue while also delaying the transition. Not exactly what you'd hope for. That being said, the first shades of yellows and oranges are beginning to pop across the higher elevations of New England. And this is where the foliage story is much more optimistic. 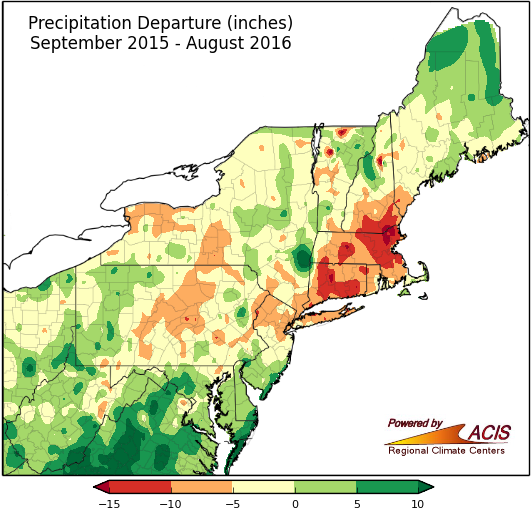 The rainfall deficit over the past 12 months in the Northeast. You can see how severe the drought has been in southern New England, but it's actually been wetter than average for parts of northern New England! A lot of variety over a small area. Source: Northeast Regional Climate Center

So there IS some good news...

Your typical haunts for a fall leaf-peeping trip in northern New England are looking O.K. The drought is MUCH less severe across the Green and White Mountains than it is across southern and coastal New England. It's still dry, but the trees aren't nearly as stressed out. And a little bit of drought can be a good thing. When we're in a dry spell, sugars tend to get concentrated in the leaves. The result is more vibrant reds and oranges, but the lasting power of the leaves diminishes. So more vibrant yet fleeting show is a good bet.

Here's the rub - you need chilly air to make those colors pop. We have a couple of very chilly nights on tap, which will help get things started. But after Saturday morning, the outlook is very warm. Temperatures well above average are expected through the end of the month, with 80s making it all the way into norther Vermont and New Hampshire. So I'm thinking that peak colors will be delayed across much of northern New England this year. There are some indications that we could get a brief cold snap at the very end of the month or early October before warm weather returns. That could at least get the colors to pop before it's too late to get a bright show.

You won't need to go to northern NH/VT/ME to escape the severe drought - the Berkshires are hanging in there a little better than the rest of the state. A similar story to northern New England is expected here. A later than average show but still with good potential for a burst of color, albeit condensed. 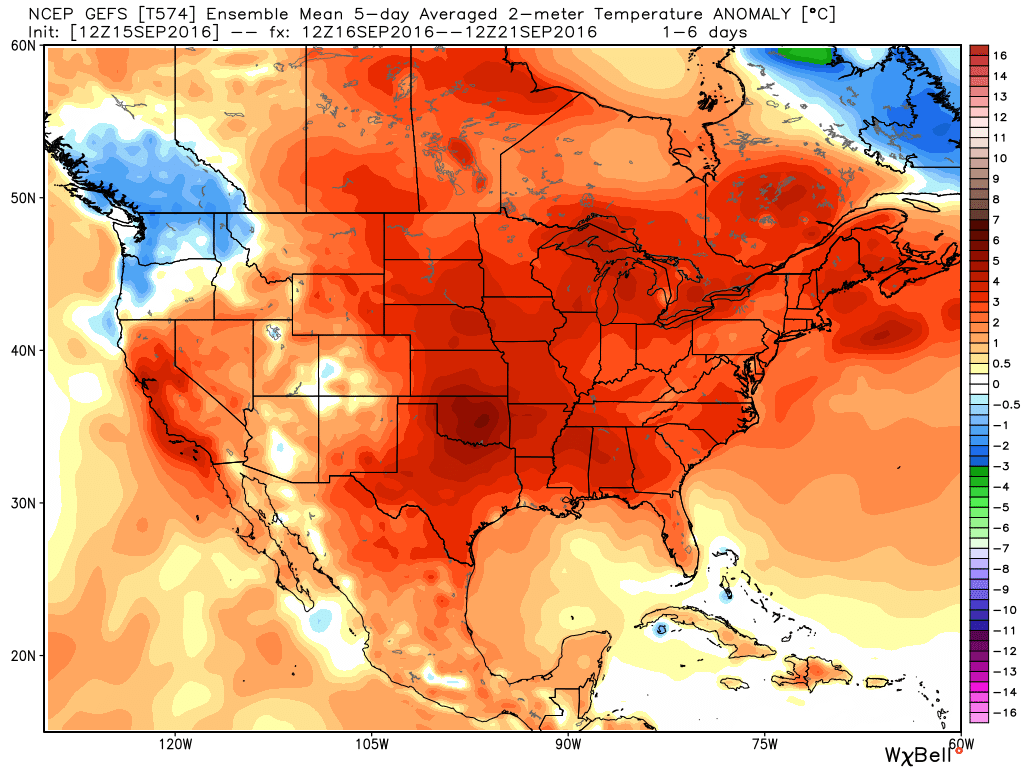 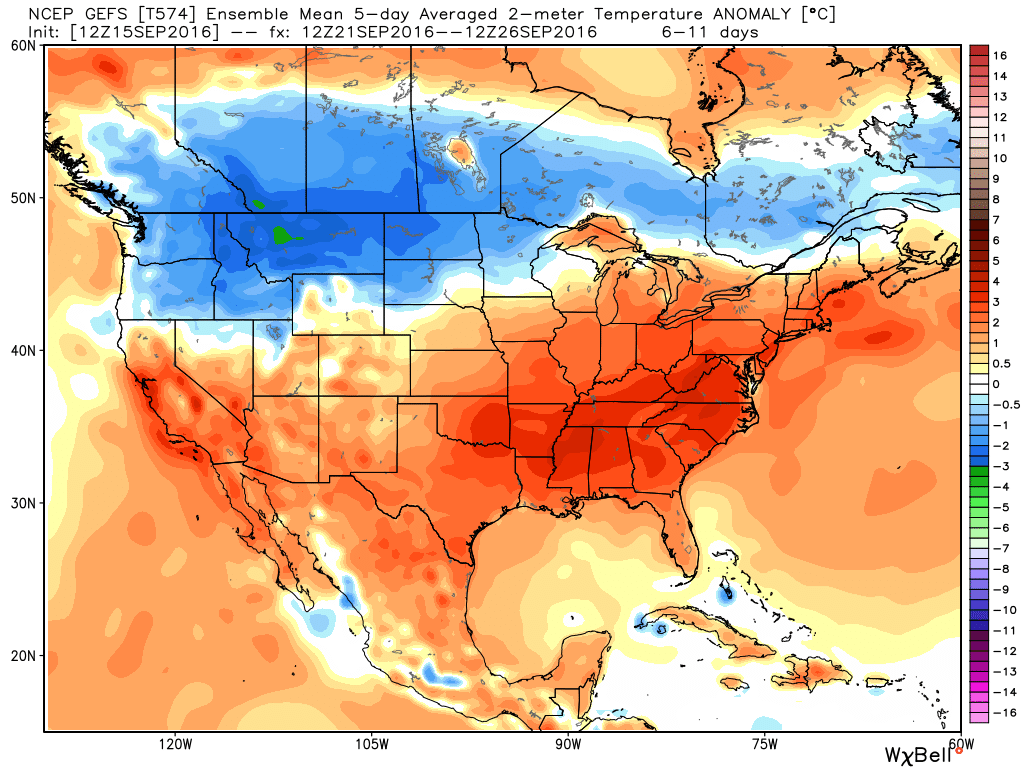 The entire rest of September is expected to see above average temperatures. Source: Weatherbell

From Worcester County eastward, we've got issues. Not only are trees stressed, but many have already died. This year will likely feature the highest non-storm related tree mortality in a long time. I stuck a shovel in the yard a few times the other day and got nothing but sand. Worms have abandoned ship and must be somewhere well below the surface. Much of the region has a 16-22" rain deficit going back to the start of 2015. The trees are not happy.

Leaf drop will be our biggest issue. You've probably already noticed a lot of 'singed' leaves that turn brown on the edges and crinkle up. I saw a little girl playing in leaf piles in Boston the other day from all the foliage that had already fallen. Expect more of this over the next couple of weeks. While some beneficial rain is possible Sunday PM into Monday, it likely won't be enough to allow the trees to rally. 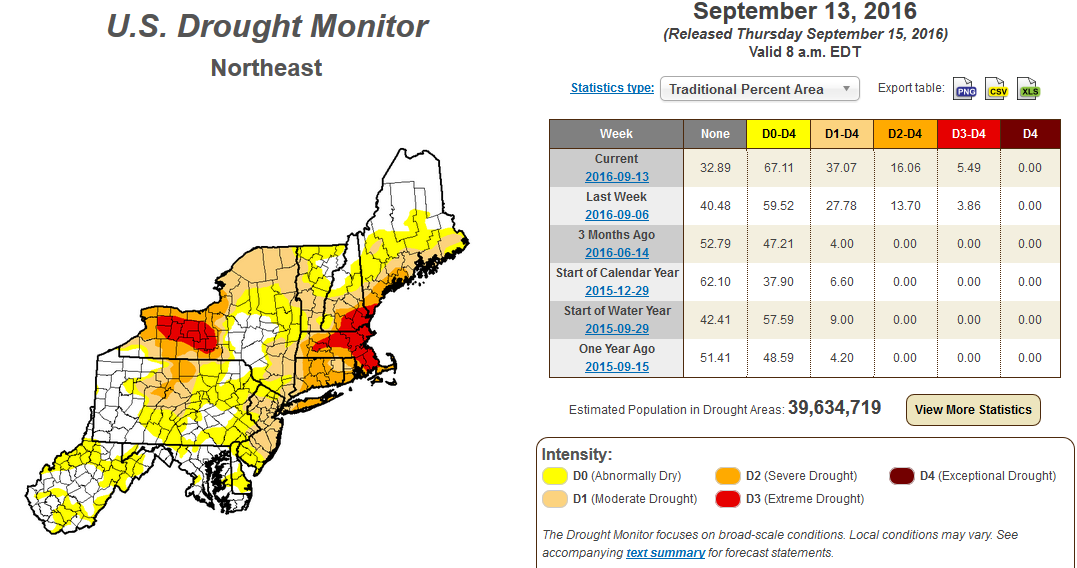 As mentioned above, very dry weather can bring out bright colors. Much like a dry summer can bring out strong flavors in grapes and apples. Concentrated sugars, ftw! But I wouldn't expect the color to last long in eastern New England. We may get a cold shot in early October, see many of the trees turn, and then shed their leaves well before Halloween. Even before that happens I'd think that a lot of brown/yellow leaves will develop due to the drought, and then fall off. Stick season will arrive early. Since Sunday into Monday looks like the only possible rain until at least the following weekend, the clock is pretty much out of time. An early October soaker would be too little too late.

This sounds pretty depressing, but I wouldn't despair. There will still be some good color around! But many trees will wave the white flag instead of the red and orange flag this autumn. A quick trip north or west looks like the best bet in October. And if all else fails, we'll still have those pumpkin beers.