BALTIMORE (WJZ) -- The same water main break that flooded CSX tracks and roadways in downtown Baltimore near the M&T Bank Stadium is causing a visible discoloration of the Inner Harbor.

According to Baltimore's Department of Public Works, we suspect the same main break on Howard Street that spilled out near M&T Bank Stadium also pushed out sediment causing the harbor plume. We're still looking upstream of the break to be sure." 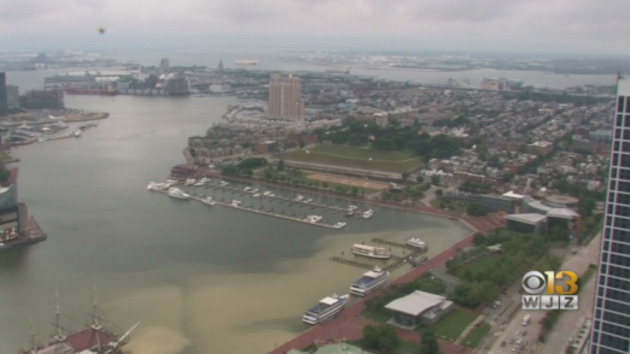 A large water main break near Howard and Pratt streets in downtown Baltimore caused flooding in the area, covering the CSX track and closing several roads in the area while DPW and Baltimore fire responded.

The water main break may also be the cause of visible discoloration in the Inner Harbor.

Several other areas of Maryland were also affected by flooding due to heavy rains.

A reported 25 water rescues were made in Montgomery County where motorists got stranded in high waters near the Potomac River and even a home collapsed after a mudslide. There was also a large sinkhole reported in Potomac.

In Frederick, several roads washed away or were flooded and unusable.